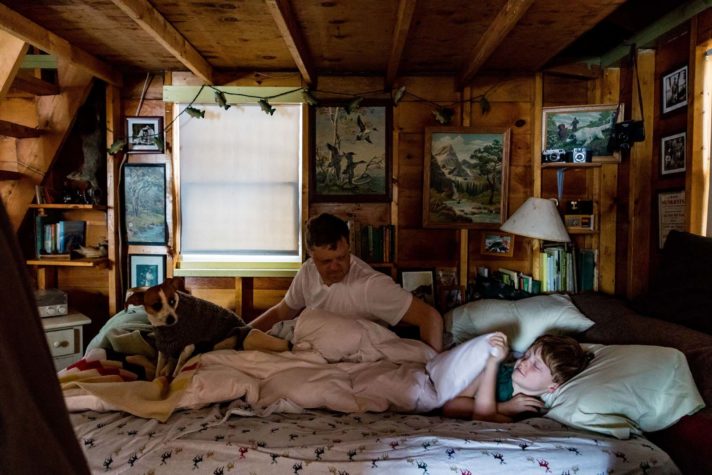 Waking up under flannel, wool, and a down comforter, eight-year-old Otto and his dad, David Pastre, on their first morning in Maine. 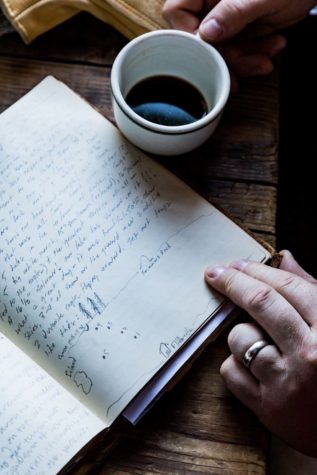 Reading past years’ fish stories in the camp journal. 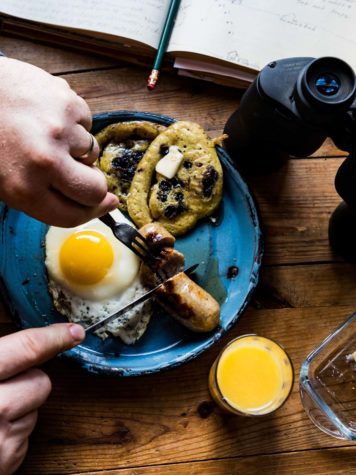 Fueling up for the day with a camp breakfast of blueberry pancakes, sausage, and fried eggs. 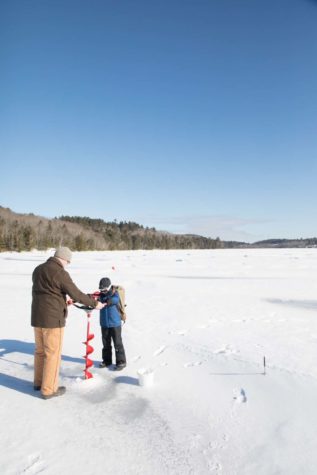 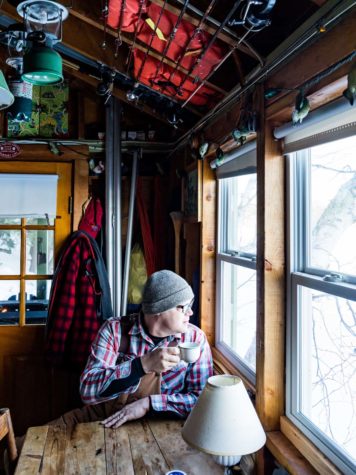 Once traps are set with a minnow on each line, we watch for the flags to rise. 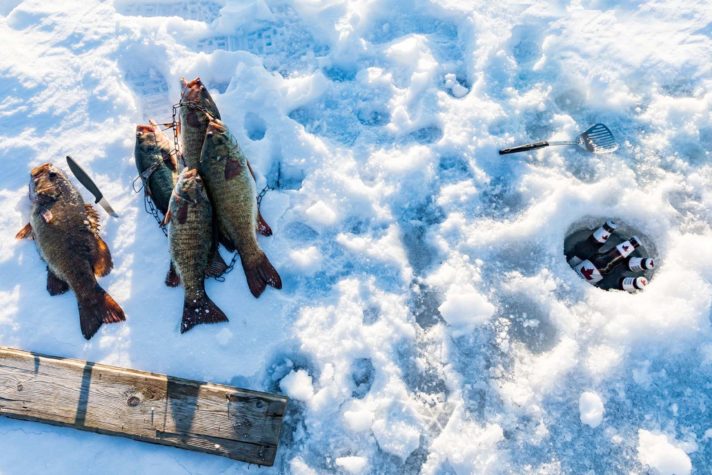 Largemouth and smallmouth bass will be our dinner. Meanwhile, a fishing hole doubles as a beer cooler. 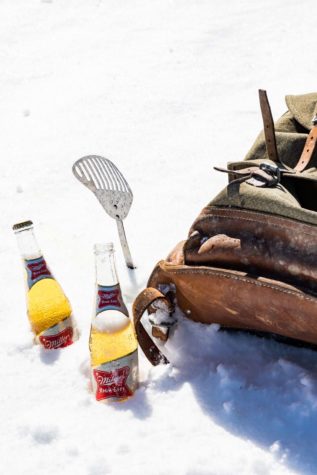 Bottles of beer staying cool in the snow. 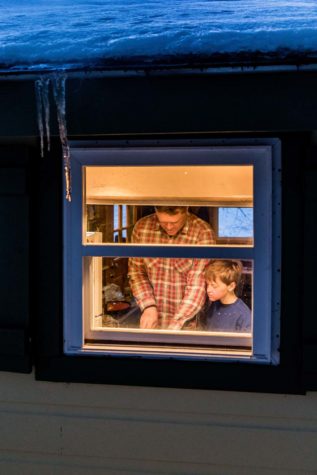 Father and son clean the fish to get them ready for frying.

The cabin isn’t much bigger than an ice-fishing shack, but the four of us—including an eight-year-old boy full of snowbound energy—are spending a winter weekend in a Hancock County camp for some food, fires, and fishing.

After lunch on Friday, they catch flights north to Bangor, and by the time our friends from South Carolina are at the cabin it’s close to midnight. The pond’s surface is frozen solid. And when it’s iced over, the whiteness of its ice and snow never lets the blackness of night fully settle in.

When we arrived earlier in the day we tested the new gas-powered auger—an upgrade from the hand-turner we had been using—and it drilled through about 30 frozen inches before reaching water. “Just think,” I said, as we looked out into the dim light of the flat hardwater that stretches more than two miles in length and a good half-mile across. “The fish are down there somewhere.”

The cabin is set at the middle of the shoreline that’s reachable by road, and there are no houses on the opposite shore—just a rise of trees smudged dark in the distance. Inside, I’ve been cooking skillet cornbread and a winter soup from dried Maine beans; the woodstove is lit, and the cabin’s plenty warm. The southern travelers, David Pastre and his eight-year-old son, Otto, look around wide-eyed at first stepping inside. They’re dear friends, but this is their first time visiting El Floretta, a 20- by 16-foot cabin with a sleeping loft. Photographer Peter Frank Edwards bought the place a dozen Februaries ago, after seeing a realty listing online with the description “you’re on the pond.”

Built in the 1950s, the petite seasonal camp is seven miles from the nearest town, but it’s so close to the pond’s edge that, if you stretch your arm out one of the windows, the water is practically below your fingertips. The name comes from a plank off an old wooden boat, and we’ve hung the plank in the eaves. In summer, the place feels like a boathouse—you can see and hear the pond lapping from every window and angle. But tonight it’s crisp and dry out there, and we’ll soon get ourselves tucked into the beds in the loft and the pull-out sofa and rest up for the days on ice to come.

David tells us that Otto is confident of fishing success. Neither father nor son have visited Maine until this trip, and Otto picked up a new phrase for the occasion. He intends to fish “like a boss,” he announces soon after arriving. By morning, he’s eager to get started. Even before breakfast, he’s beside the woodstove and pointing out the windows. This kid’s ready to run out on the snow-covered ice. I look outside, too, and see that the surface is in a wind-whipped state, with peaks of snow creating ridges all across the pond.

The first order of business for the boy after he pulls on his snow pants, boots, jacket, ski goggles, and hat is to get out there and run— stopping in several places to lie down on his back, stretch out under the sky, and wave his arms and legs to make snow angels. Never far from him during all of this is Esther, our two-year-old, 20-pound shelter dog. That feisty little squirrel chaser slept curled up next to Otto, and is now outside zipping around him. Also born in the South, Esther is wearing a wool sweater for this cabin visit.

Meanwhile, I start in on my favorite wintertime cabin tasks, all of which have the benefit of adding warmth inside the uninsulated pine plank walls. I put logs on the fire, and on the kitchen stove I get hot cocoa and blueberry pancakes going. The other coffee-drinking adults start gathering gear for a day outside. David consults the cabin journal, where Peter Frank has drawn a map to show his successful ice-fishing holes from past years. They discuss a plan, and then with Otto they make a half-hour run to a backyard bait shop in Orland for a bucket of minnows.

When they return we sit for pancakes, sausage, eggs, and orange juice, then we all start carrying everything out onto the ice: the hand auger and the gas one, deck chairs, wool blankets, and, of course, the wooden tip-ups and spools of fishing line with hooks. The temperature has dropped into the teens overnight, and we’re all plump with layers of warm clothes. I’m wearing a red-and-black Scotch plaid wool coat that was my dad’s. The hand-me-down was his favorite coat, he’s told me, when he was a teenager hunting in western Pennsylvania. I was probably Otto’s age when my parents took me ice fishing with my brothers. I remember sitting on a sled and looking into the hole cut into the ice, just like now.

As we’re walking out to set up, Peter Frank recounts their minnow run. The word is, it’s a good fishing weekend, and even the old-timers are out on Silver Lake. “We drive up and beep the horn and the woman comes out of the house and meets us across the driveway in a shed,” he says. “We want emeralds as usual, but she explains that the shop’s been busy and the mediums are sold out, so she instead scoops up large ones, and well more than the two dozen we ordered.” When he pays her, she smiles, handing Otto the full bucket and saying, “That ought to keep you busy.”

We’re fishing a lucky seven traps today, the most we’ve ever done, since we can get holes drilled faster with more people and the power auger. I remember the first time Peter Frank and I went ice fishing here, taking turns turning the crank on the manual auger that we’d bought at a yard sale in East Blue Hill. It’s hard work. An easier way is to drill into the much thinner ice of a hole someone has previously fished. But no one else is on the pond this weekend, so the guys set out to drill all the new spots themselves. Their line of traps stretches across to about 50 yards from the opposite shore.

Once all are set with a minnow on each hook and a red flag bent over each fishing hole, the watching starts. If a fish tugs a line, the flag goes up. We use a couple sets of binoculars to see them all. By lunchtime the thermos of coffee has been replaced with bottles of water, Polar Orange Dry soda (Otto’s choice), and Molson Canadian and Miller High Life beers. Steam rises from the enamelware cups of hot bean soup that we eat out on the ice with slices of toasted cornbread.

The fish are biting. The guys have already pulled in a few bass. I follow Otto and Esther toward a tip-up that’s sprung, and soon we’re standing over the round hole in the ice. From his chair in the sunshine, David calls out: “Bring it in easy, hand over hand.” Otto does, gloveless now.

“Wait, I feel something on the line,” Otto says, and when he pulls to the end, we see it’s a white perch that’s hooked—the only one of the day. The bald eagles that nest down the shore and that will land for fish and bait scraps are noticing us. They make high-pitched, chattery calls sometimes. By late afternoon in the sunshine, the final tally is four smallmouth bass, three largemouth bass, and the one perch. The biggest catch is a female smallmouth that measures about 17 inches.

We’ll have fish for dinner, for sure. Otto hugs some of them, and the guys show him how to get the best “big fish” photos by holding the fish closer to the camera. Before long, it’s time to clean and gut each one. There’s blood on the snow, and even more eagle interest. And then fillets are dredged in flour and spice, to be fried within two hours of the last one being caught.

Here comes the early winter darkness. We light candles and keep the woodstove’s fire hot during a fish-fry dinner followed by toasts with an ice-fishing must: cups of ice filled with milk and Allen’s Coffee Flavored Brandy. Before Otto falls asleep with his own special drink, the orange soda, he declares it an amazing meal and offers a toast, too. “Cheers to the eight fish we worked hard on and caught!”

The next day the sun’s shining even brighter, and temperatures have warmed up. We’re all back on the ice again after coffee, but the fish have quit biting. No flags pop up. It’s a stellar day anyway.

With binoculars, we watch a couple of eagles that are on the ice eating yesterday’s fish scraps. I get out my cross-country skis and ski to a small island in the middle of the pond, circle it a few times, and come back. Peter Frank finds our handful of sugaring taps and some empty water bottles to use as jugs, and hammers taps into a few maple trees. Otto watches the fish traps and attempts some snow fort building.

“Ever had a red snapper?” Peter Frank asks David and Otto. They haven’t. It’s so blue- sky beautiful out there that we bring out the Coleman camp stove and cook up a hot lunch on the ice. After a couple of trips to the cabin to carry out supplies, we’ve got the stove going on an old apple box. Everyone pulls the chairs and blankets near to watch the hardwater cookery and then eat the results. We have red-dyed hot dogs from W.A. Bean and Sons in Bangor, which Otto agrees really do snap when you take a bite, Morse’s sauerkraut from Waldoboro, and baked beans from B and M in Portland.

By the time we leave El Floretta that afternoon to drive down to Belfast for showers, a lobster dinner, and an overnight in town, the clear maple sap is running into the jugs—we’ll collect it tomorrow and have enough to boil down for one day’s breakfast syrup.

Before our guests have to head back to the airport to fly south, Otto fills a page in the cabin journal with line drawings of the wooden traps, fish on hooks, hot dogs on the grill, and bottled drinks cooling in the snow. He also writes some notes about the fires and eagles, then he pens what will be the defining line of this weekend—when I ask him about the trip nine months later, it’s still how he describes those three days. “Yeah,” he says. “We fished like bosses!” 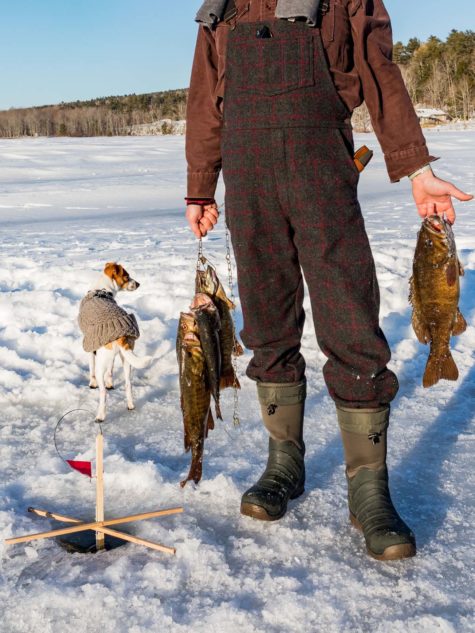 The successful day’s ice catch and Esther the dog standing watch. It’s about an hour before the fish will go into the fryer at the cabin, just across the pond. 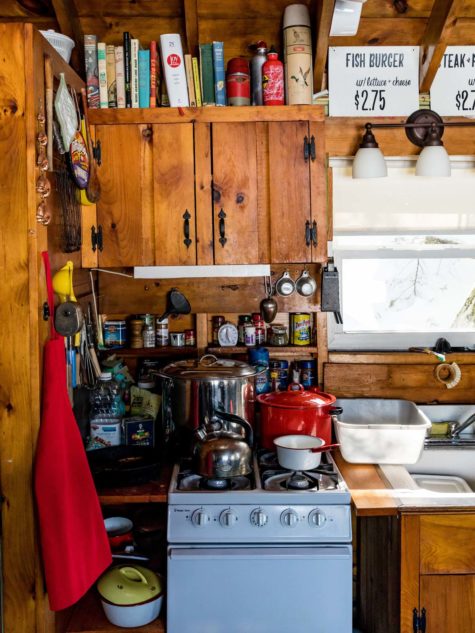 Keeping warm with plenty of coffee, cocoa, and all-day cooking. Just outside, a few maple trees are tapped to catch any running sap. 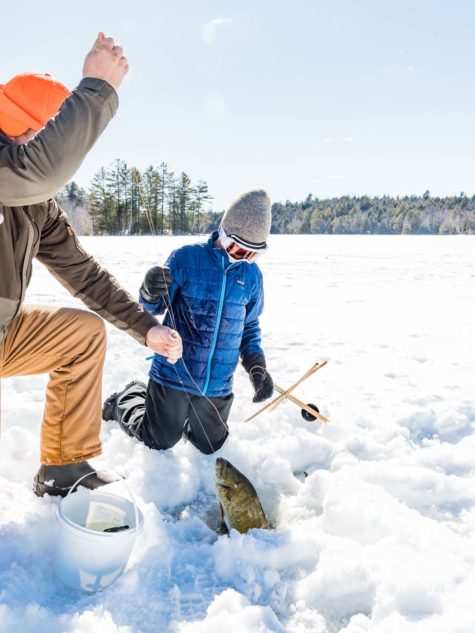 Hand over hand, David and Otto pull in the fish—seven bass and one perch in all. 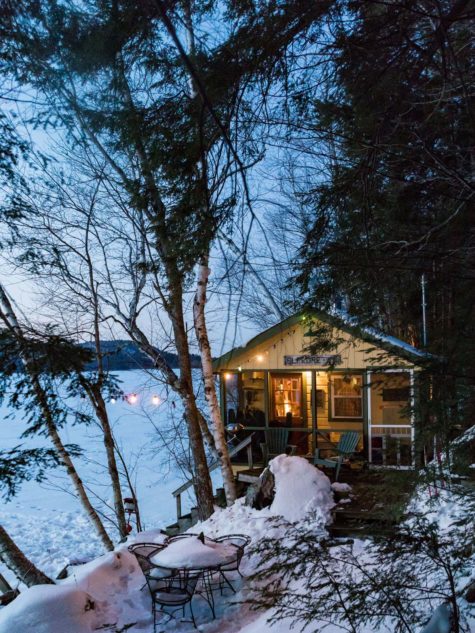 Just before the sun sets at the little waterside cabin. 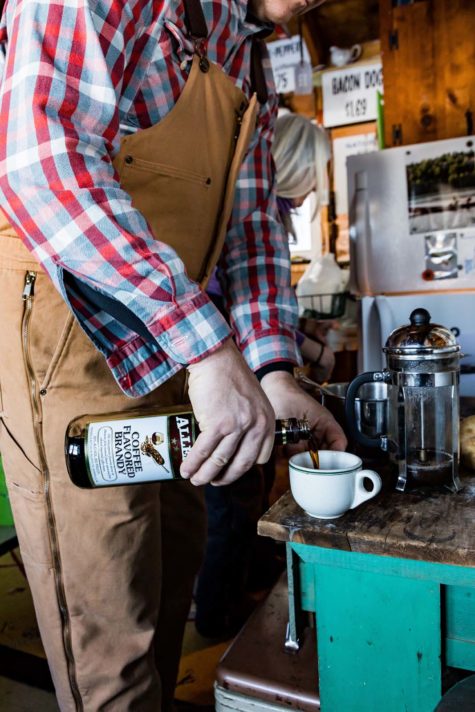