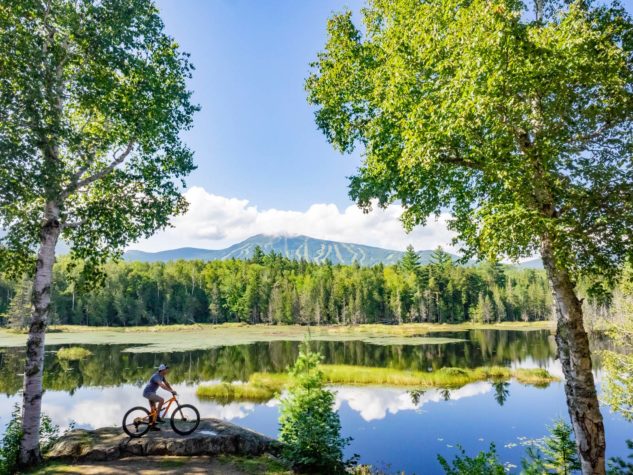 Ian Butler is manager of the Allspeed Cyclery and Snow shop at the Sugarloaf Outdoor Center, which is near this viewpoint. Three summers earlier, his wedding was held in this spot. 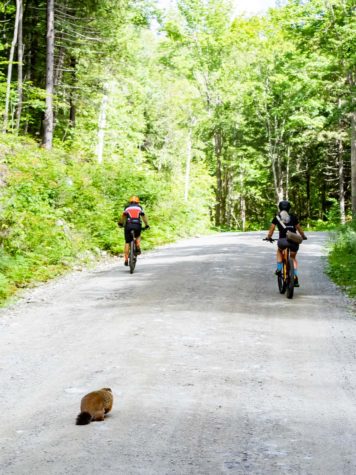 A groundhog skitters onto the road during our ride. 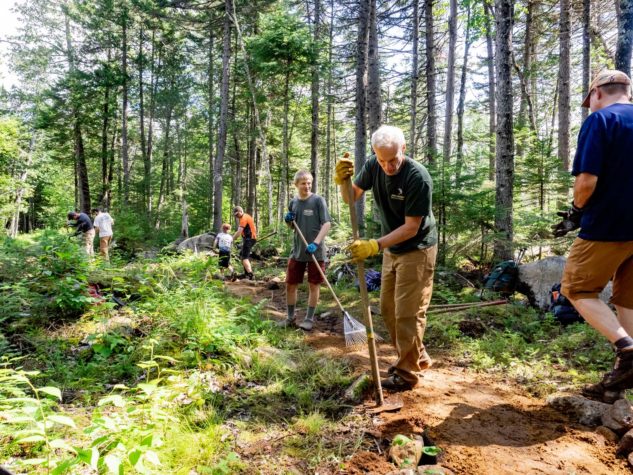 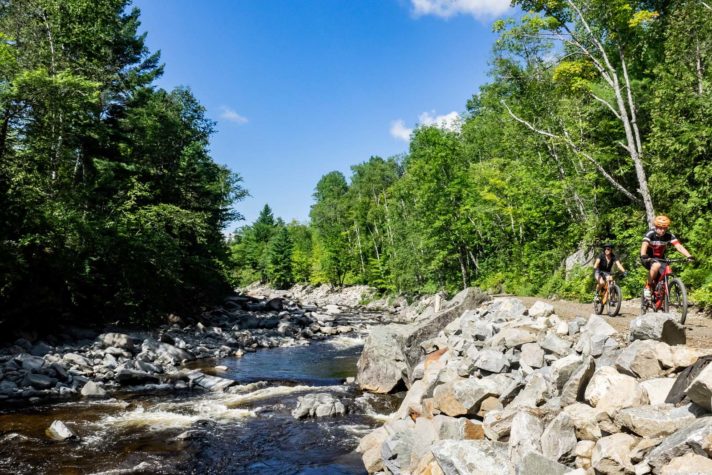 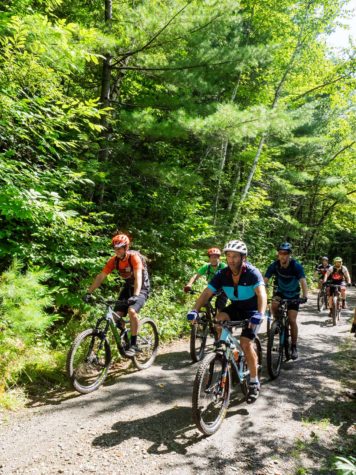 A group of mountain bikers enjoy the weather. 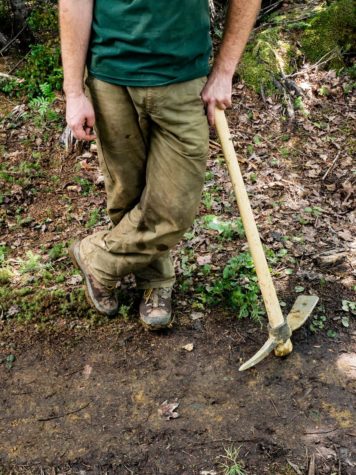 A volunteer takes a break from working on the trail. 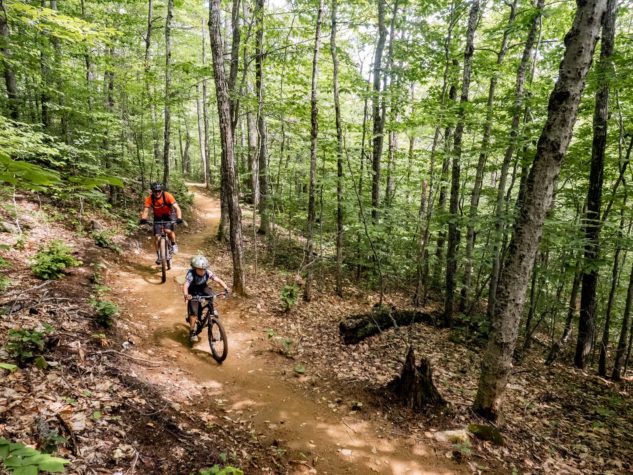 Dave Hughes of Bucksport, one of the founding members of the Carrabassett chapter of the NEMBA, bikes with his son, Levi 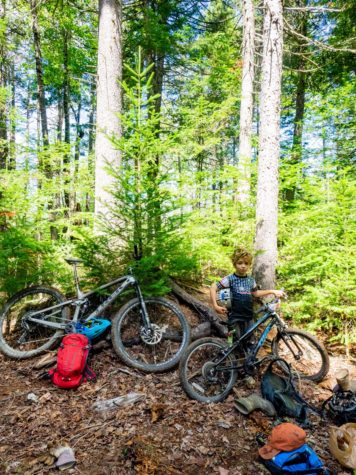 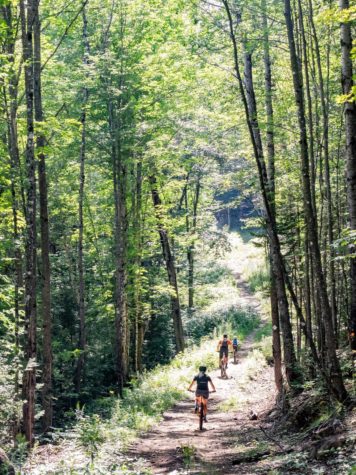 A downhill ride is the reward after a climb to the Stratton Brook Hut, elevation 1,905 feet. 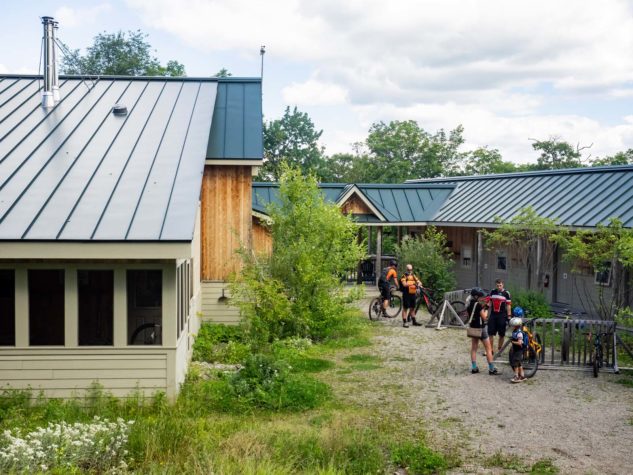 Huts are often day-trip or overnight destinations when riding the trails. 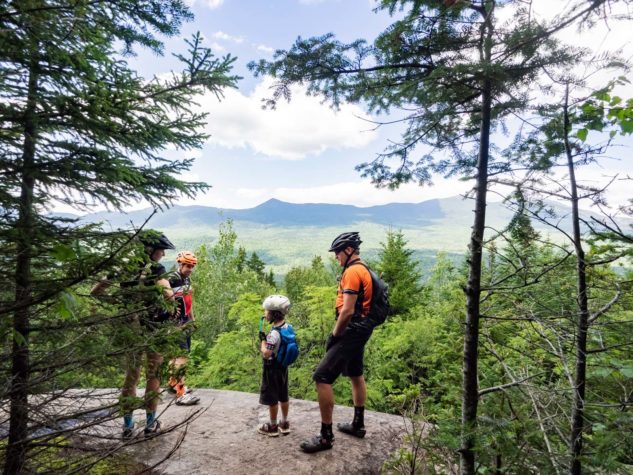 Near this hut is a stunning overlook of the Bigelow Mountain peaks. 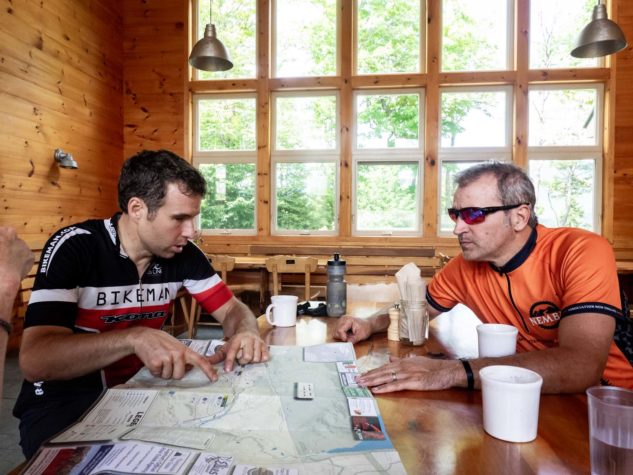 Three summers ago, between two thunderstorms, Ian Butler’s wedding was held right here, beside the Sugarloaf Outdoor Center. At the edge of wide Carrabassett Valley pond, it’s a stunning setting that frames an almost base-to-peak view of Sugarloaf and the mountain’s ski trails.

But right now, we’re thinking of different trails: the more than 80-mile network that begins here and winds through the valley, connecting looping paths, unpaved roads, a rail-trail, and the hike-bike-ski routes of Maine Huts and Trails.

“You wouldn’t believe how much mountain biking is hidden around here,” Butler says. He’s the manager at Allspeed Cyclery and Snow, a shop that opened inside the Outdoor Center this year.

We’ve come to get outfitted with bike rentals: latest-innovation models with super bounce in the suspension and ultra-chunky tire treads for traction. It’s a busy place this morning. On trails just outside the doors in all directions, people are pedaling.

This summer, Butler has met mountain bikers who hail from all across Maine, New England, and eastern Canada, along with riders from Colorado, California, and the Netherlands. Sugarloaf’s standing as a mountain biking destination is growing, just as local interest and investment in the trails is building. Photographer Peter Frank Edwards and I are here to catch up with local members from the Carrabassett Region’s chapter of the New England Mountain Bike Association (CRNEMBA).

Yesterday, when Peter Frank and I arrived in the valley, the mountain had a blue cast, with fog skimming the peaks. It was a steamy August Saturday, and we passed through drizzling rain on the way up from Portland. But this morning, after our stay in one of the dormered, cozy sixth-floor rooms at the Sugarloaf Mountain Hotel, the sky is clear, bright, and sunny, with just a few puffy clouds. In the hotel elevator, another guest eyes our padded shorts and cycling shoes. He says he and his girlfriend are visiting to try the mountain bike trails, too, and they’ve hit some slippery spots. “With yesterday’s rain, it’s greasy out there,” he cautions.

In the parking lot at the outdoor center, we meet a couple from New Vineyard who have just pulled on their bike helmets. The husband and wife say they finished building a timber-framed barn this week and came to the valley to take a day-long break to ride the trails. We also run into six riders who have been friends for years and who drove from Massachusetts, New Hampshire, and other parts of Maine to rent a house together for an annual gathering. Riding the trails is their focus, but during this year’s western Maine getaway they’ve also done some whitewater rafting and skeet shooting.

Carrabassett Valley looks ready for all of these visitors. It’s the height of summer, with lush views in every direction. That includes a field of golden sunflowers marked by a metal sunflower sculpture beside Route 27. Cut blooms are $5 a dozen, arrayed in buckets at the roadside. August here seems to be blooming season, mountain biking season, and also bride-and-groom season. We’ve already seen two wedding parties decked out in dresses and suits.

I’m pedaling through the Outdoor Center’s parking lot and testing the gears and brakes when Warren Gerow, one of the guys who’s volunteered to show us around the trails, pedals up in red, orange, and black cycling gear: long shorts and calf-length socks, a helmet, and gloves to cushion his hands and knuckles in case of a scrape or fall. I notice sweat on his brow, and as we shake hands he mentions that he’s just finished a morning ride of about 50 kilometers around Flagstaff Lake. He suggests we head right out to start exploring.

A forensic engineer based in New Gloucester, Gerow is an avid mountain bike rider and the president of CRNEMBA, which has about 200 members. The organization has grown from its start as a loose group of riders who started caring for the trails in the 1980s and then began organizing races in the mid-1990s.

Across Route 27 from the Sugarloaf Access Road, we pick up the western end of the Narrow Gauge Trail. Now a gravel road, the trail closely follows the path of the Carrabassett River, which is sparkling and splashing along in the sunshine. This part is easy pedaling, so I’m paying attention to my rental bike, a Santa Cruz Tallboy in an electric orange color. It’s comfortable right away, and the huge, deep-tread tires and suspension system help me go right over rocks without a bumpy ride. Those are good features, Gerow tells me, especially for the single-track routes ahead—the ones hikers use, too, and often just wide enough for bikes to pass in single file. Those are the conditions he prefers. “I like being in the woods on the dirt trails, the single-track paths,” he says. “And there are fitness benefits. Mountain biking keeps me in shape for skiing.”

To get to the single-track trail from the Narrow Gauge, we follow the Carriage Road and start gaining elevation, from less than 900 feet around the Carrabassett Valley airport to over 1,300 feet at the Sticky Trail, not far from the bridge at Poplar Stream Falls. Along the way, we’re getting views of Bigelow Mountain—then there’s a sudden jolt of wildlife: I hear a whistling sound I can’t identify at first, and a groundhog steps into the road ahead then follows behind us for several steps. “I’ve never seen that before,” Gerow says, and we pedal on.

I’ve owned a “mountain bike” in the past, but in name only. It was simply a sturdy bike, the style with knobby tires and upright handlebars—the kind that were everywhere in 1990s, even in places without mountains or hills or many rocks. On this ride, I see first-hand that this Sugarloaf experience is true mountain biking, especially as we turn onto the Sticky Trail. It’s a narrow path, stretches of which are strewn with rocks of all sizes, reminding me of a seasonal stream bed. (In the trail rating system, Sticky is a blue trail, meaning “more difficult.” The green trails are “easiest,” and black diamond trails are rated “most difficult.”) The shock absorbers on my bike get a workout on Sticky, and on the trickiest parts I stop to walk my bike.

A short way in, we catch up with a group of CRNEMBA volunteers who are just finishing a weekend of trail work. The dozen volunteers, including a couple of kids, have stayed for two nights at Poplar Hut. The hut is one of four in western Maine that are part of the Maine Huts and Trails system—it’s possible to ride bicycles, hike, cross-country ski, and snowshoe between them.

Two of the volunteers are using a canvas sling to lug a granite boulder to a new position. Others have spades, shovels, pickaxes, saws, and hoes. Josh Tauses, from the town of Carrabassett Valley, is helping to coordinate, and he says the volunteers did in two days what it would take a two-man professional crew a week to complete. He’s been involved with trail building and care around here for years and was the first president of the Carrabassett mountain biking chapter when it officially organized in 2010. Tauses mentions that he’s also a waiter at Hug’s Italian Cuisine in the wintertime, and that makes me smile. The 22-seat dinner spot is where we fueled up last night—on pesto bread, fettuccine with pink Alfredo sauce, and a boulder-sized homemade meatball.

Speaking of food, the volunteer crew here is just stopping to eat lunches they brought and to survey the work they’ve done before hiking back out of the woods. For a few dozen yards, they’ve dug out and hauled rocks and added dirt and tiny stones to create a smoother central path. Boulders line the sides to create a protected “crib” for riding along the trail.

The first rider to try out the improved section of Sticky is Levi Hughes, age six, and volunteers line the trail to cheer him on. Wearing a helmet and pedaling a mini version of the bikes we’re on, he charges along, full of concentration. This tough little kid with dirt on his elbows and knees—like most of the volunteers—says he can’t remember learning to ride a bike. His father, Dave Hughes, says that, as soon as Levi could walk, he started wheeling around the house on a no-pedal push-bike. Dave’s own love of riding began when he was a kid in Massachusetts in the 1970s, he recalls, “with a banana-seat bike that I modified to ride in the woods.” Dave is another of the founding members of the NEMBA chapter in Carrabassett Valley, and both father and son join us for the next leg of our day’s ride.

With Gerow in the lead, we make our way back down to the Stratton Brook trailhead near the Sugarloaf Access Road entrance, then begin our second big climb of the day. Following the Newton’s Revenge trail, we take advantage of every side trail that zig-zags in off-shoots, which provide some relief from the nonstop uphill pedaling of the full ascent. We finish the climb with the Stratton Brook Hut in view, after an elevation gain of about 600 feet. It’s challenging, steep, and rocky in places, but little Levi completes the entire ride along with us. 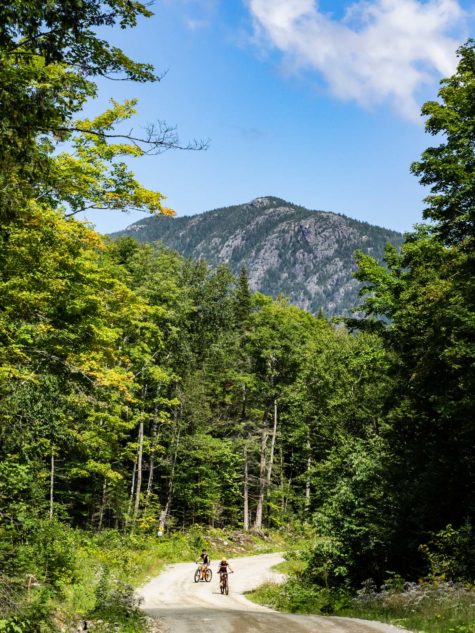 Mountain bikers are out for a summer weekend ride in Carrabassett Valley, which has a growing network of more than 80 miles of trails. 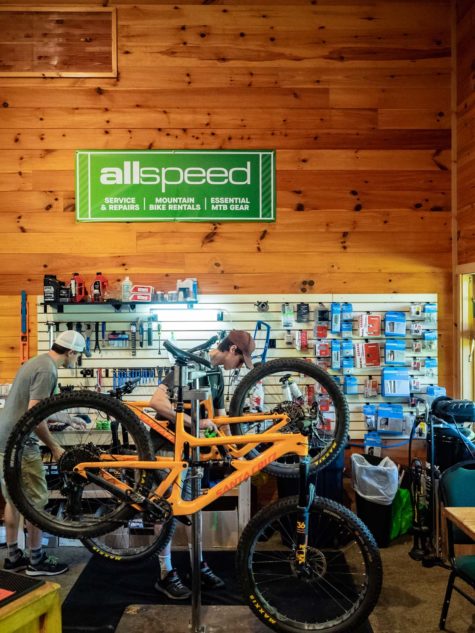 Portlandbased Allspeed Cyclery and Snow opened a shop this summer in the Sugarloaf Outdoor Center.Josh Lawless, also working at Allspeed 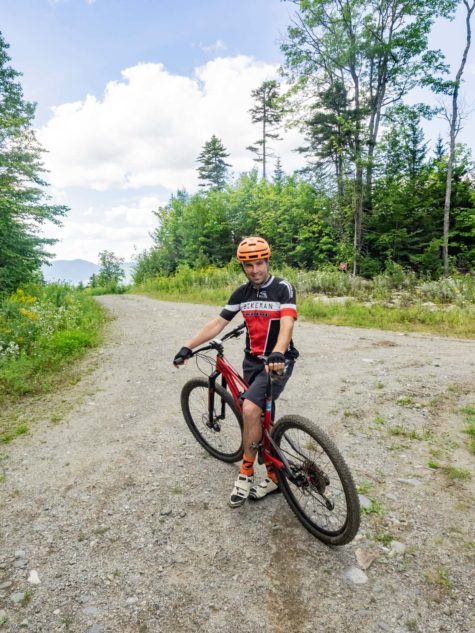 Warren Gerow, president of the Carrabassett Region chapter of the New England Mountain Bike Association (CRNEMBA), pedals up after a morning ride of about 50 kilometers around Flagstaff Lake. 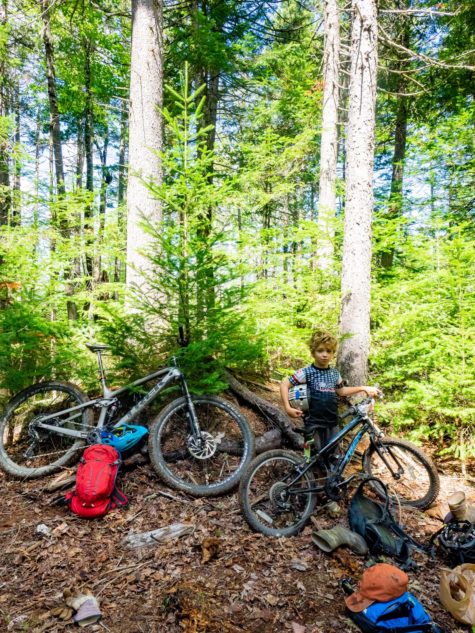