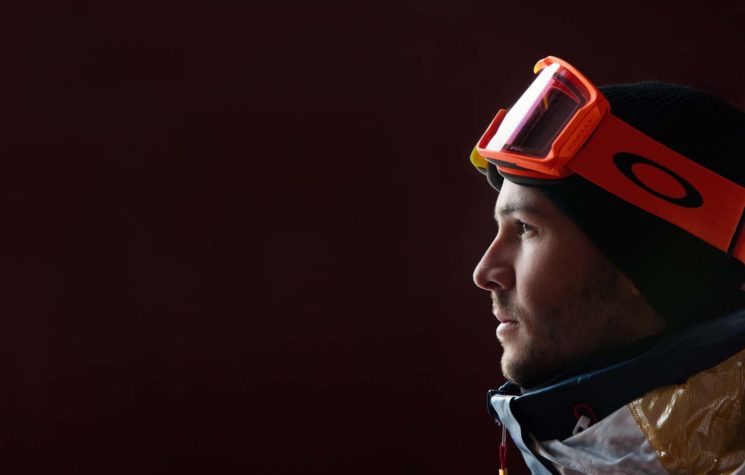 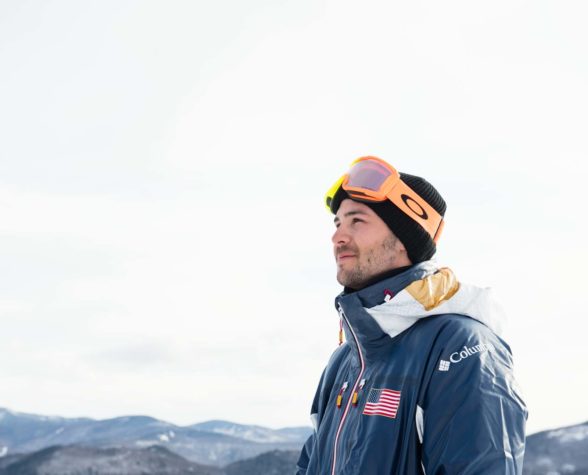 This year Murphy, who lives in Park City, Utah, announced his retirement from the U.S. Ski Team. 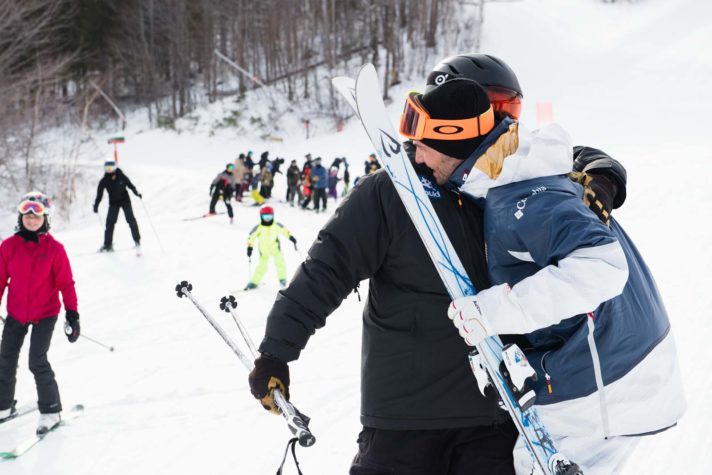 Murphy receives a warm welcome at Sunday River in March during his return after competing in the Olympics. 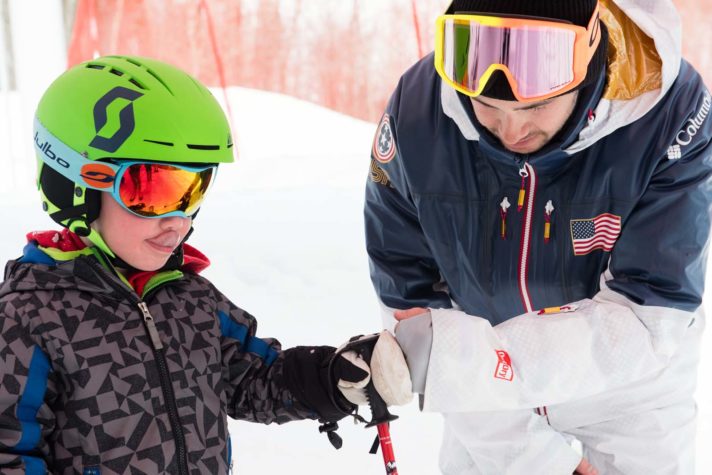 Murphy fist bumps with a young skier at the top of a mogul course.

From backyard dirt biking in Bethel to skiing moguls in Pyeongchang, Troy Murphy has always been supported by his hometown

Troy Murphy is surrounded by a swarm of bobbing helmets. It’s his first trip back to his home mountain after competing in the Winter Olympics in Pyeongchang, South Korea, and young skiers are pointing with mittened hands to show where they want the Olympian’s autograph. Murphy has to move a panda-bear cover out of the way to sign the back of one fan’s helmet. Others ask him to sign their goggle straps. “Did I miss anybody?” Murphy asks.

For the past 20 minutes Murphy has been trying to walk about 100 yards up the mountain to a small mogul course Sunday River Resort has set up as part of a slew of events celebrating Murphy’s return, but well-wishers keep delaying his ascent. The 26-year-old skier knows many of them, including teens he’s coached at Sunday River and locals who have known him since he was just another kid on the mountain. There are hugs, hand- shakes, and smiles.

“Excuse me, I’ve never shaken the hand of an Olympian,” says one man who spotted Murphy on his ski run down the mountain. “We were really thrilled to see you out there. You did us proud.”

The feeling is mutual.

Four years ago Murphy, a 2010 graduate of Gould Academy, was named FIS Rookie of the Year and nearly made the United States moguls team for the Sochi Olympics. In 2018 he got the call, entering the Olympics ranked twelfth in the world in moguls. Murphy had to raise over $30,000 a year to cover living and traveling expenses while he competed for the U.S. Ski Team and in the World Cup circuit. To raise the money, he’s hosted an annual auction and golf tournament at Sunday River, and relied on other support from the community. “On one hand, it’s tough and stressful, but I was lucky to have the community that really helped out and people really stepped up and came back year after year,” Murphy says. When he made the U.S. Ski Team’s A Team, which covered his expenses, he donated $6,000 raised from the charity events to the Sunday River Ski and Snowboard Club.

Murphy moved to Bethel as a first-grader and attended Gould Academy, where his father, Matt Murphy, works in information technology. Long before he competed under the lights in Pyeongchang, Murphy and his friends would ski on a hill in his backyard, where his father built a rope tow. The kids would construct jumps and ski into the night as their parents watched from the deck, says Matt. Growing up, Murphy was always into jumping, whether it was on his family’s trampoline or on beds, says his mother, Nancy Coleman-Murphy. Once when Murphy was dirt biking, his father’s friend, Jeff Yingling, then the freestyle skiing coach at Gould, noticed Murphy handled jumps well and suggested he try moguls.

Mogul skiing involves navigating down a steep course with moguls (small mounds of snow) and two jumps. In the qualifying round at the 2018 Winter Olympics, he landed a back double full—a backflip with two spins— that helped him finish fourth, scoring 80.95 points. In the first round of the finals, Murphy scored only 72.72 points and failed to advance, finishing in seventeenth place. The runs are quick—under 30 seconds—and his disappointment was clear as he passed the finish line in the finals. “He killed it his first day. He was awesome,” Coleman Murphy says as we watch her son sign autographs in the lodge at Sunday River. “So the second day, when he didn’t make the first cut, was heart-wrenching.”

The seventeenth-place finish didn’t diminish the welcome he received at the mountain. “I bet you’re proud of him,” a woman tells Matt and Nancy. “What a gracious young man. I tell him he’s a hometown hero. He says, ‘I don’t know about that.’ You are to us, the people here.”

People talk to Murphy like he’s their own son or family member, telling him how proud they are and that they’ve been following the videos he’s posted from a skiing trip in Alaska. “I don’t think he realizes it,” says his father. “He’s not around to see it. I don’t think he realizes what an impact he’s had.” Few of the people greeting Murphy know that yesterday, at the U.S. Freestyle Championships in Waterville Valley, New Hampshire, Murphy announced his retirement from the U.S. Ski Team.

Standing next to the small mogul course at Sunday River, Murphy tells me that soon he’ll be returning to Alaska with his friends for  the sixth year in a row to do big-mountain skiing. They’ll live in a camper, rent snowmobiles to reach the mountains, then hike up and ski down the ungroomed, untouched snow. “I felt like I was missing too much skiing to do mogul skiing, so I’m excited to be able to ski for fun and go wherever I want to go and ski wherever I want to ski,” says Murphy, who lives in Park City, Utah. His passion for big-mountain, backcountry skiing has been growing, and he plans to focus more on shooting videos and photos while there. He’ll be able to use the networking and promoting skills he learned when fundraising to secure sponsorships for his big-mountain skiing trips. “I’ve competed for so long now that it will be nice to not have the pressure of competition and just ski for me,” he says.

I later watch videos from his Alaska trips. They could not be more different from his mogul highlights, where every turn and jump is quick—and quickly judged. His strength and technical ability are evident as he backflips or carves around rocks down a nearly sheer cliff of powder, but there is no finish line at the end of the run. Before one video fades to black, Murphy is skiing across a valley covered in snowmobile tracks. There is no one else in sight—no crowd, no flashing score—just his snowmobile as he gently comes to a stop. 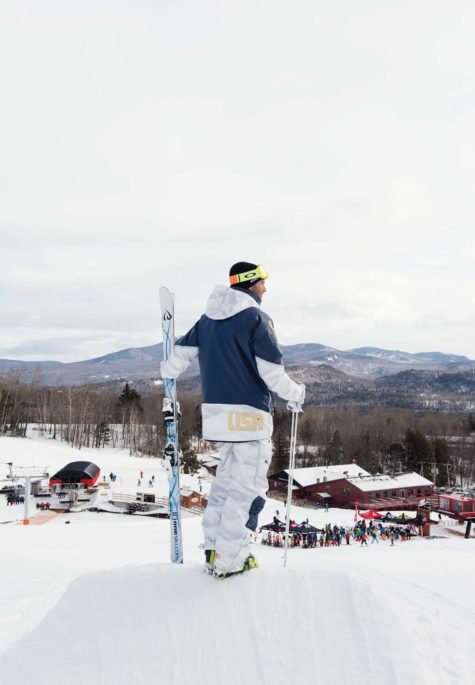