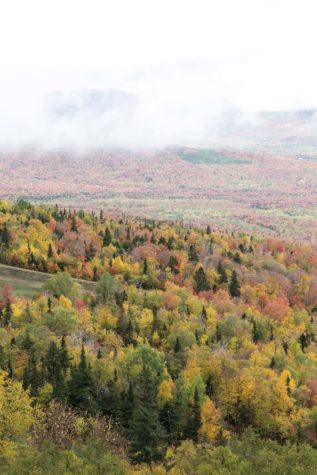 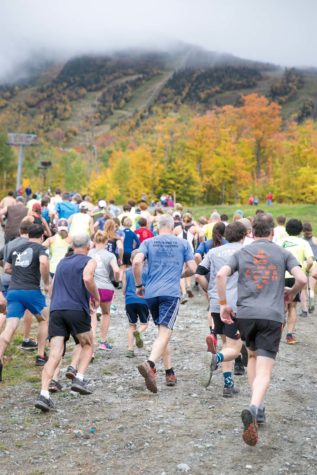 Around 200 runners participate in the Uphill Climb each October during Homecoming Weekend. 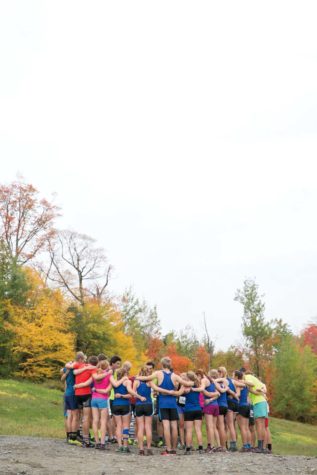 The race draws a variety of Sugarloafers and runners, including the Colby College Nordic ski team. 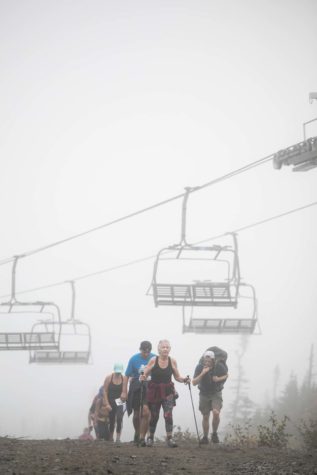 A woman nears the finish line of the Uphill Climb, which is much colder than the temperature at the mountain’s base. 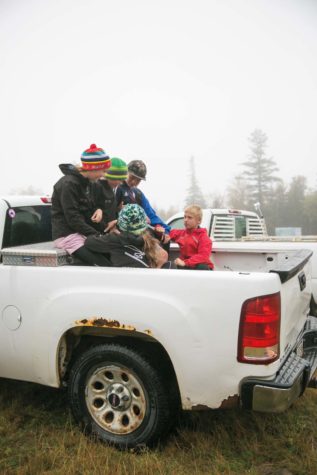 The Uphill Climb is known for its camaraderie and the way it brings together friends, family, and neighbors. 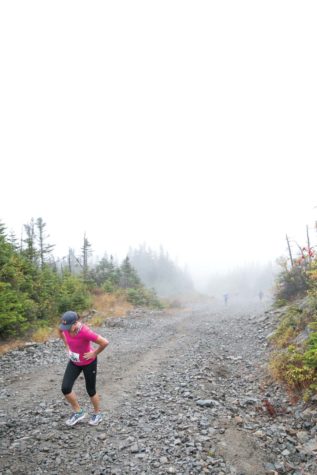 Lori Hyland of Readfield makes her way up the mountain 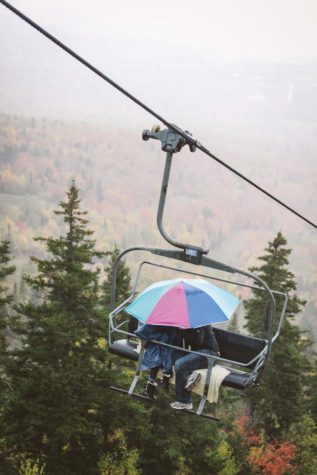 It’s a Long Way to the Top

As runners make their way up Sugarloaf‘s Binder Trail, their legs burn and ache. A cheeky sign tells them, “This is the only hill on the course.” But this is no hill—it’s a 4,237-foot mountain, the third highest peak in Maine. The course is only 2.5 miles, but it takes most racers an hour to climb the 2,400-foot vertical elevation from the base to the summit.

“It’s a total suffer-fest,” says Sam Punderson, a broker with Mountainside Real Estate, who has run the race with his family.

The Uphill Climb isn’t an easy hike, let alone an average race. Held annually during Sugarloaf ’s Homecoming Weekend in early October, the race is as challenging mentally as it is physically. Fueled by adrenaline, racers start near the SuperQuad chairlift, but as the trail steepens and the air thins, attitudes change. Exuberance turns into exhausted determination. Heading up the mountain, the flat stretches are few and far between. Racers climb up and over rocks, and some people actually crawl through the more difficult parts. Not only is the mountain steep, but as racers make their way up the temperature drops. It’s not uncommon for the summit to be covered in ice and snow even when the temperature at the base is in the 50s or 60s.

The Uphill Climb is a test of the human body, but Kim Fish says she likes the pain. Climbing mountains isn’t a once-a-year special event for her. Fish, a teacher who lives in Sidney and teaches at Messalonskee Middle School, regularly hikes up Maine and New Hampshire’s tallest mountains and enjoys the challenge of getting to the top. Her hiking experience doesn’t make the Uphill Climb a cakewalk for her, though: “You’re almost done, but the last uphill section is like, ‘Oh no,’” Fish says.

For Greg Nemi, who’s participated in the race for three years, the hills were a shock during his first climb. “I thought there’d be some flat spots, but it’s pretty strenuous,” he says. “I should’ve known—I’ve been skiing here since the ’60s.” If he hadn’t spent so much time skiing at Sugarloaf, Nemi probably never would have done the Uphill Climb in the first place. “I’d been up there a thousand times, but I’d only ever gone up by chairlift, so I figured I’d climb it,” he says.

Some of the racers do it because they love to run or hike. The Colby College Nordic ski team participates every year as a training exercise and often leads the pack up the mountain. Most of the 200 participants are here because they love Sugarloaf. “The whole atmosphere around the weekend, it’s just a lot of fun,” says Nemi, who’s president of Franklin Printing in Farmington. “It’s that Sugarloaf camaraderie.” The Uphill Climb started in the ’60s and was discontinued for several years before being started back up in 1979. It has been held every year since.

Nemi says, when he realized how many people he knew who were participating, he signed up, too. Fish says her family has been doing the climb together for years as a way to spend time together outdoors. Punderson, whose 13-year-old son races each year, says the event has become iconic because of its intensity and how it brings people together. “It’s definitely something people put on their to-do list,” he says. “It’s on the Sugarloafer bucket list.” Also on the bucket list is the Triple Crown designation, which Nemi and Fish both aim for every year. To receive the honor, someone has to complete the Sugarloaf Marathon or 15K in May, the Flume Trail Race in August, and the Uphill Climb in October. “By doing this, it keeps you accountable to stay physically active all the time,” Fish says.

When racers finish the Uphill Climb, they’re greeted at the top by their jackets and belongings, which are brought up by a van during the race. They retrieve their layers, bundle up, and make their way over to Bullwinkle’s to eat hot food, drink cold beer, and swap battle stories from their journey up the trail. The gathering at the mid-mountain restaurant also honors the first, second, and third place winners for men and women in six age categories, as well as the overall men’s and women’s champions.

While it’s fun to celebrate the winners, most people aren’t running for recognition. If anything, people are competing against their own finish time from the previous year. “It’s more of a personal accomplishment for most people who do it, and it’s about camaraderie,” says Jen Reese, Sugarloaf ’s event manager. That group spirit continues after the race. After the last beer has been finished at Bullwinkle’s, the racers as a group head back down the mountain the same way they came up: on foot. While spectators can take the chairlift up and down the mountain, the Uphill Climb participants usually walk down. Nemi says it’s a tradition he looks forward to. “One thing that’s beautiful is the walk down this time of year,” he says. “Whether it’s a sunny day or a foggy one, the colors are incredible. It’s worth going to the top for.” 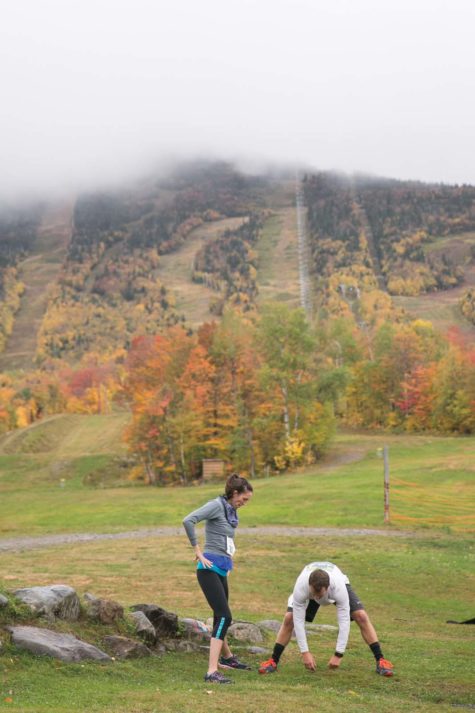 Gabrielle Murphy of West Hartford, Connecticut, and Rich Peale of Portland stretch before the 2.5-mile race. 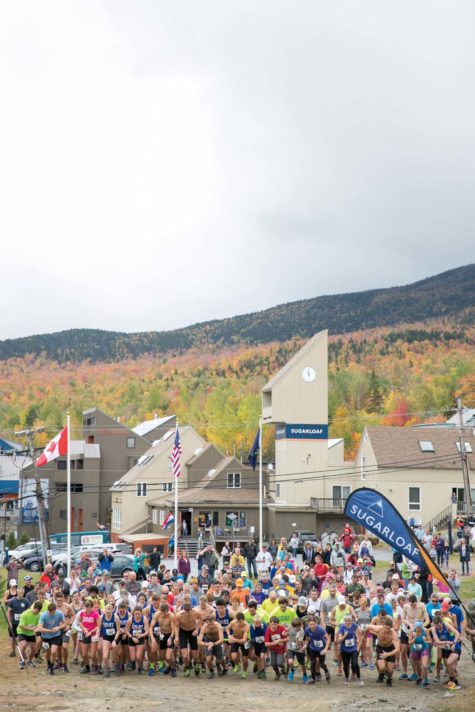 The race, which starts near the SuperQuad chairlift, goes 2,400 vertical feet up from the base of the mountain.