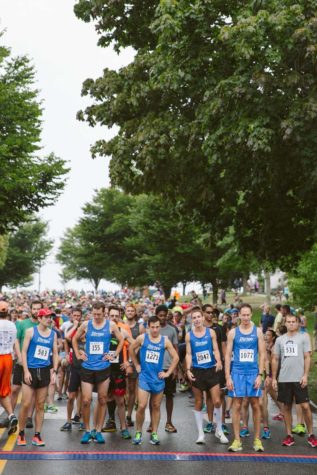 Members of Dirigo RC, a Maine based running club, are primed to start the Trail to Ale 10K. 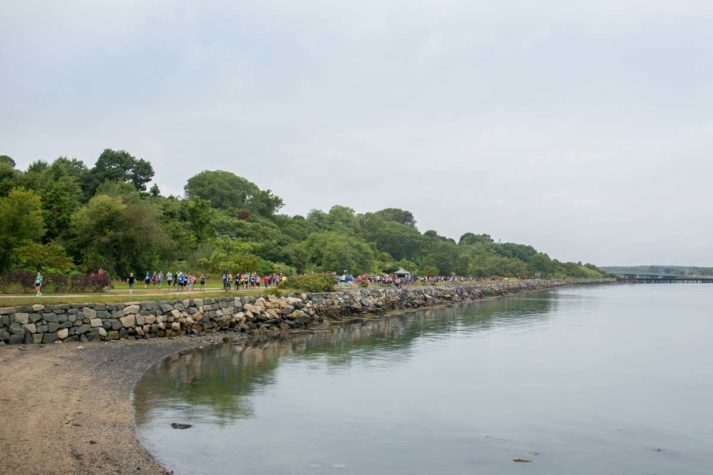 A view of the finish line on the eastern prom trail 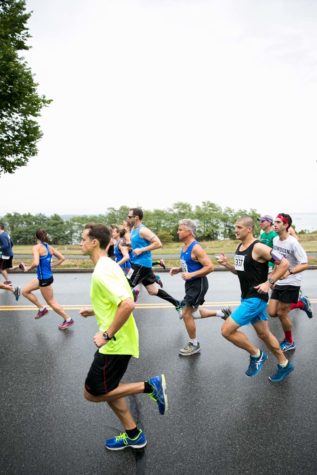 Trail to Ale runners near the starting line

Why Mainers hit the road running.

Most road races start early in the morning, and the Trail to Ale 10K is no exception. The sky is gray and a light mist clings to the crowd gathering on Portland’s Eastern Promenade. Several runners sprint over from the porta- potties, tucking their shirts in along the way. The starting gun sounds and we are off, propelled by the adrenaline rush of racing with (and against) all who have gathered.

My running buddy—publisher Kevin Thomas—and I have positioned ourselves midway back in the group of almost 2,000. We don’t want to be trampled by those who are chasing gazelle-like PRs (personal records), nor trample others whose approach is more leisurely. We leap over puddles and try not to slip on the moist leaves that cover the storm drains.

Running tends to be a solitary pursuit, while road racing is anything but. When we attach a numbered bib to the fabric of our sweat- wicking shirts, we agree to be counted among our peers. Our legs join a moving forest of limbs circumnavigating a predetermined course. This provides an apt visual metaphor for living in the Pine Tree State. Maine is a place of both solitude and community. Although we value our privacy, we equally value the company of those who choose to dwell with us in an ecosystem that veers yearly from bone-chilling winter cold to sweltering August heat.

Runners, especially, must love (or at least accept) all of the weather that our state conjures up. Running in Maine is not for the faint of heart. In the winter, it can be dark, and it can be cold. Very, very cold.

Chef and restaurateur Steve Corry runs outside year-round. “I prefer it to be cooler,” says Corry. “I think it’s a lot easier to train.” Corry, who co-founded Five Fifty-Five, Portland Patisserie and Grand Cafe, and Petite Jacqueline, along with his wife Michelle, considers lower temperatures a fair tradeoff for beautiful vistas. “Most of my running is in Cape Elizabeth,” says Corry. “Around Crescent Beach, you’re looking out at Richmond Island, and you’re constantly distracted by beauty. The next thing you know, it’s, ‘Oh, I’m done for the day. Wow. That’s fantastic.’”

Corry has always been athletic, favoring team sports like lacrosse and soccer when he was in high school. As an adult, he joined a pick-up basketball league. “I was always trying to offset what I like to do for work and leisure, which is eat and drink beer, by staying somewhat fit,” he says. Corry and his wife began running as a couple just before they were married in 2000—training for a half marathon in Stowe, Vermont. After they opened Five Fifty-Five in 2003, they didn’t have much time to run together until their son, Seamus, was born in 2007. “Then we had a legitimate excuse not to work all the time,” says Corry. Eventually they convinced a group of their coworkers from Five Fifty-Five to run the TD Beach to Beacon 10K Road Race in their hometown of Cape Elizabeth. “We printed off t-shirts with a slogan on the back that said, ‘The Belly Rules the Mind,’” says Corry. “Everyone that ran the race with us got a t-shirt and came back to our house that afternoon for a cookout, as they were guaranteed the night off. There was a good six or seven of us that ran, which was a considerable percentage of the staff then.”

Corry loves the energy of the Beach to Beacon, and attributes much of it to those who come out to volunteer, or simply watch the race. “They’re part of the scene, and a huge part of the support,” says Corry, who has gone on to run many other races, including his first marathon, the Paris International Marathon, in April. “It’s an uplifting feeling. There’s a euphoria to it.”

Individuals who support road races, whether by running in them, volunteering, or spectating, often choose their events based on the beneficiary of funds raised. The Trail to Ale is one of three races that raise awareness and funds for the nonprofit urban land trust, Portland Trails. Beach to Beacon chooses a new charitable partner every year. In 2016 it was the My Place Teen Center in Westbrook.

Portland native Fred Forsley first became involved with Beach to Beacon at the request of Joan Benoit Samuelson, the Olympic marathon gold medal winner. “Joanie Benoit called and said, ‘Do you know who I am?’” recalls Forsley, the founder and president of  Shipyard Brewing Company. “I said, ‘Yeah, I know who you are.’ She said, ‘Would you be willing to be involved in a road race?”

Twenty years later, Forsley not only sponsors road races like Beach to Beacon, the Trail to Ale 10K, and the Shipyard Old Port Half Marathon—he also runs in them. “In high school, I was never excited about running,” says Forsley. “I tried to avoid running. I was into football and other things.”

Several years ago, Forsley agreed to sign up for the Boilermaker 15K in Utica, New York, with his grown daughter. “Mistakenly I said that if she was running, I’d run it,” says Forsley. “She was and I didn’t know it.” He has been running ever since. “It’s de-stressing for me,” says Forsley. “If I don’t run for three or four days, I get short-tempered. For me, it just releases all of that tension that builds up.”

A graduate of Cheverus High School in Portland, Forsley appreciates the opportunity to run the streets where he has lived. “If you run in the morning before the cars get here— before the people get here—it’s really a quiet city,” says Forsley. “You can run up Congress Street and have an experience that’s really unique. There’s such history there.”

Forsley likes that road races enable him to see familiar places in a new way. “When you’re running the Beach to Beacon, you turn the corner and you run by the IGA, and you see that big flag that the firemen have out,” says Forsley. “You flashback to that in the middle of the winter when you’re driving out there. It’s a powerful thing.”

Like Corry, Forsley encourages his colleagues at the brewery to run as well. “Anybody that wants to run in any of the races we sponsor, we’ll give them a free entry,” says Forsley, who says that as many as a dozen people will race. “The half-marathon was brutal on a few last year,” jokes Forsley. “We lost one driver—he quit after that.”

For many of us, crossing the finish line of a road race justifies any pain we have experienced. Runners, walkers, and wheelchair athletes are cheered on, no matter where we may fall in the stream of people who pass the digital clock that informs us of our time. That is the glory of road racing: we have each accomplished something, by showing up and scrambling across the city streets and mud-puddled paths. We have trained diligently across the tumult of Maine’s seasons, and we have endured.

We know that (if we are lucky) we will wake up and run again tomorrow. Some of us will run by the ocean, and some of us will run under city street lamps. Each of us will retreat back inside that solitary place that every runner inhabits at one time or another—until the next race, when we’ll lace up our sneakers and join several hundred friendly strangers who share our passion for hitting the Maine roads on foot. 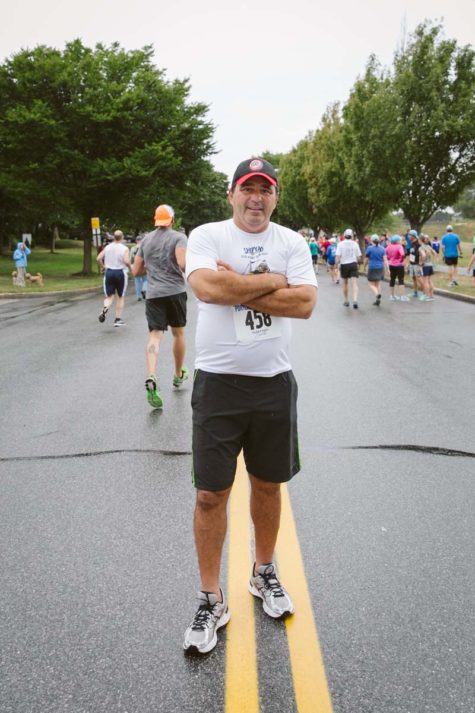 Fred Forsley, founder and president of Shipyard Brewing Company, runs many of the races his company sponsors. 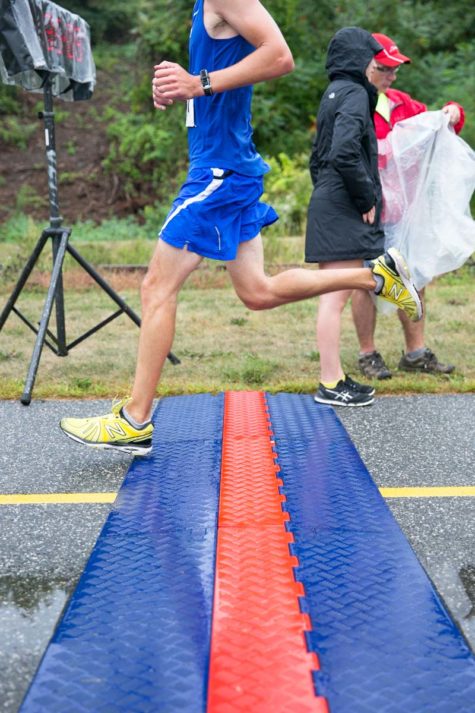 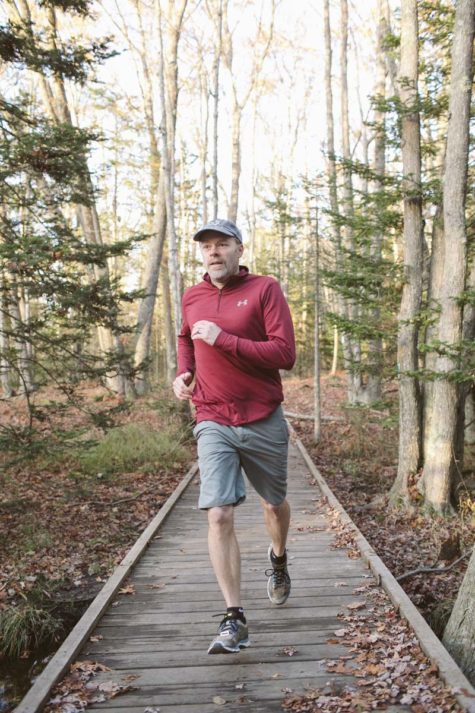 Restaurant owner and chef Steve Corry at one of his favorite spots: the Gull Crest Fields off of Spurwink Avenue in Cape Elizabeth. He does most of his trail running on the Greenbelt Trails system in that town.