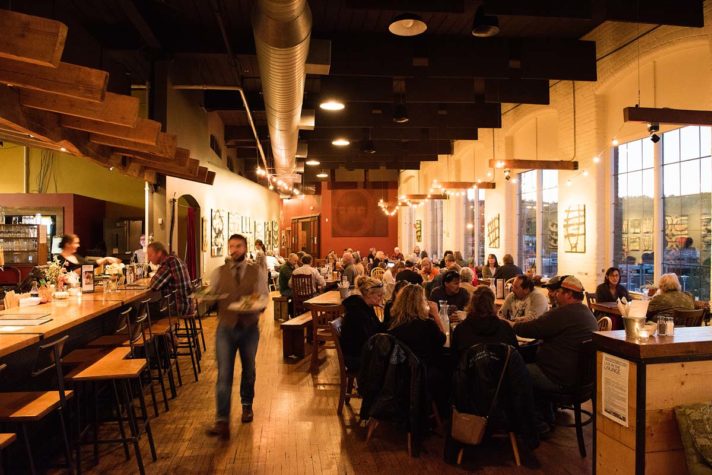 The old mill’s industrial vibe lives on at Frontier. 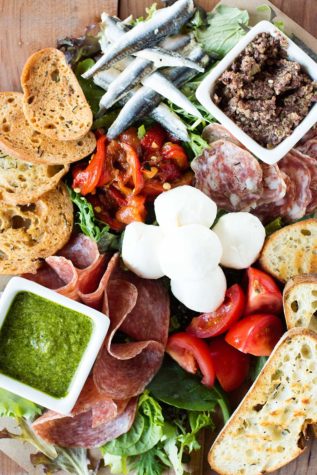 Market Plates are a chance to sample the best ingredients from around the world and nearby. 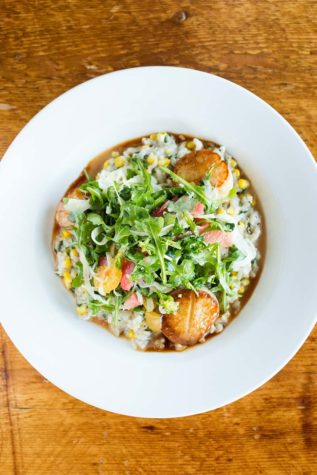 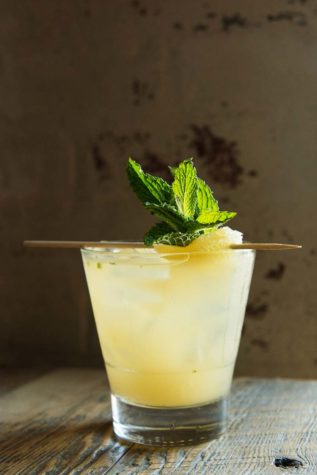 Brio Smash, one of the many beyond-the-ordinary cocktails.

Going beyond borders in a former textile mill

There are millions of stories at Frontier. Everything—the art on the walls, the films in the theater, the music and lectures, the food on the plate—tells a tale. Owner Michael Gilroy has the story that started it all. Gilroy spent the 1990s leading month-long cultural expeditions to far-flung locations. He met his wife, Chelsy, in Kashgar, a city in western China where Asian, Eastern European, and Middle Eastern cultures converge along the Silk Road. “I was leading a group to Kyrgyzstan and Chelsy was leading a group into Pakistan, when we literally crossed paths,” he says. “I have a soft spot for these kinds of cross-cultural outposts.” When the couple moved to Maine in 2000, Gilroy explored ways he could share his travels with the community. “I thought, how can I bring these stories home? I wanted to build a place that revolves around storytelling,” he says. “Some of the most profound moments of the work I did came when we stopped to rest or eat. The group would sit together, often with locals, and tell stories. We ate whatever was best at the local markets.”

Gilroy’s urge to replicate these moments is the basis for Frontier. He found the space in Fort Andross, the former Cabot Mill alongside the Androscoggin River, in 2004. “There were leaks and the space was raw, but the location is unbeatable,” he says. “I had a vision I knew I could pull off.” It took Gilroy two years to turn the space into the welcoming and energetic destination it is now, doing much of the work with friends, using mostly reclaimed materials. High ceilings and original, scuffed wooden floors tell the story of the mill’s history. Gilroy has kept the industrial vibe alive, filling the space with an eclectic assortment of heavy wooden dining tables, wood and metal stools at the bar, and strung lights. Tall windows overlooking the river and the Frank J. Wood Bridge flood the place with light, and the view changes dramatically with the seasons. In one sunny corner, oversized, hand-painted drum lights hang over an eclectic collection of inviting upholstered chairs.

Gilroy’s original plan did not include a full-service restaurant. Films came first. Frontier’s theater is a funky space, filled with seats salvaged from the Biddeford Opera House (now the City Theater). Narrow tables allow patrons to enjoy drinks or desserts while they watch. Fittingly, a map of the world is painted on one wall. The schedule includes outdoor adventure films from Patagonia, selections from film festivals, documentaries, work from Maine filmmakers, and many pieces that can’t be categorized. Last year, in a perfect confluence of interests, my husband and I watched Touchdown Israel: Tackle Football in the Holy Land, part of the Maine Jewish Film Festival. It featured Robert Kraft of the New England Patriots, as well as Orthodox Jewish weekend warriors in Israel. Some films are shown in conjunction with community organizations, with discussions afterwards, such as an Our Health film series cosponsored by Mid Coast Hospital. The extensive film selection is a collaboration between Gilroy and program director Sean Morin. Together they attend the annual Art House Convergence in Utah, a conference focused on community-based and mission-driven films. There, they meet with distributors and plan to bring new ideas back to Maine.

“I never liked the idea of coming out of a thoughtful film into a bland commercial space. I want to come out and discuss it in a nice environment, have a beer, and maybe a bite to eat,” Gilroy says. When Frontier first began offering food along with drink, there was nothing more than a panini press and two hot plates. “We started out very simply in 2006,” Gilroy tells me. “When the economy started to crumble in 2008, we had to make a decision: we either fold or double down. I knew we had something that people wanted, so we decided to go all-in.” In 2011, the conversion of Frontier into a full-service kitchen and restaurant began. The menu expanded to include global cuisine and dishes that speak to the roots of the mission. At the heart of the menu are the bountiful Market Plates, inspired by meals around the world and the best of what’s available regionally and seasonally. They’re an invitation to share with others, with ingredients arranged beautifully on rustic wooden boards. A Middle Eastern plate features house-made falafel and hummus alongside Pineland Farms feta and grilled naan. The Italian plate is an arrangement of meats and mozzarella, with tapenade, roasted peppers, focaccia, and crostini. You can also create your own, drawing on a list of ingredients from around the world and nearby.

The rest of the menu is a veritable trip around the globe. A sushi rice bowl melds classic sushi flavors with local ingredients for a light, refreshing dish that is a staff favorite. Rigatoni Bolognese is prepared the traditional way, slow-cooked to develop depth. Roasted squash with a complex mole sauce is a shout-out to Latin America. And a Szechuan salmon kimchi bowl served over lo mein noodles in dashi broth is just spicy enough to give your palate a jolt.

There are tried-and-true favorites on the menu, too. A trio of Caldwell Farm beef sliders comes on buttery brioche buns, and garlicky mussels are steamed in a broth made with Substance Ale from Bissell Brothers Brewing Company, then finished with cream. Fried Brussels sprouts are a perennial bestseller, as are the vegan nachos. The menu suits all kinds of diners, from families with young children (like the Gilroys) to older patrons who live in one of the nearby retirement communities. Noly Lopez is the chef and kitchen manager, “but the food is a collaborative effort,” says Gilroy. “Anyone working in the kitchen can contribute an idea.” He continues, “I’ve had to become more of a restaurateur these past few years, but we’ve always stuck to the original mission and values. Food is a great binder for humanity. It’s critical to breaking down barriers.” Dining has become such an important part of Frontier that it now supports the arts and cultural programming. “We have incredible things to offer. Food and beverage keeps the whole business afloat,” says Morin.

Frontier hosts more than 600 events each year. That includes live music in the restaurant’s lounge on most Wednesday nights, the SoundBites storytelling series, comedy nights, and benefits for area nonprofits. A glance at the online schedule shows an astonishing range. Gilroy used to handle it all himself, but when the business expanded he brought on Morin—a guitarist, composer, and arranger, as well as the musical director of Portland’s annual Beatles Night. He seeks out area talent to play everything from bluegrass and folk to soul and even Middle Eastern jazz. “With Sean, the music piece has expanded and it’s been really fun,” says Gilroy.

Behind the bar are colorful chalkboard signs and big glass vessels filled with spirits in various stages of infusion. As I take a seat, Scott Smith, Frontier’s bartender for the past five years, greets me. Taylor Smith, his twin brother, works in the kitchen. They have an interesting story, too. “Our grandparents worked right here in the mill,” Scott Smith tells me. He gestures towards the window, and says, “I grew up by that footbridge.” After traveling and volunteering with Americorps, he returned to Maine and found himself a place at Frontier, chatting up customers and creating and mixing drinks. Cocktails at Frontier are a complex and creative blend of ingredients, including many with the house- infused spirits, and change with the seasons. Date- and spice-infused port gets mixed with New England Distilling ’s Gunpowder Rye with a Cynar rinse, perfect for a winter night. The cranberry gin and tonic is a cold-weather take on the classic, featuring Cold River gin, cranberry-spice shrub, and a rosemary sprig. Mocktails get the same special attention. “Gil wanted to have something on the bar menu for his daughters,” says Smith. He mixes up the Samhain Spritzer for me, and explains that the Gaelic word refers to the beginning of the “darker half of the year.” The drink is a delight, spicy and sweet with Royal Rose cardamom- clove syrup and garam masala bitters added to apple and cranberry juices.

Frontier recently celebrated its tenth anniversary. On the communal table in the private dining room, Gilroy unrolls a set of plans to show me an expansion that is about to get underway. The lobby will be renovated to include a box office, concession stand/ coffee bar, and a new entrance to the theater. There’s a large gallery space to accommodate special events and an all-day coffee lounge. “This will create a much better experience for our community,” he says. “We’re using our anniversary as an occasion to hit refresh.” The evolution continues, but the mission for Frontier, and Gilroy, will always be as a curator for shared experiences. “In my heart, I felt like this is the place to bring out the best in people. When I see connections being made, that’s how I know I’m doing good.” 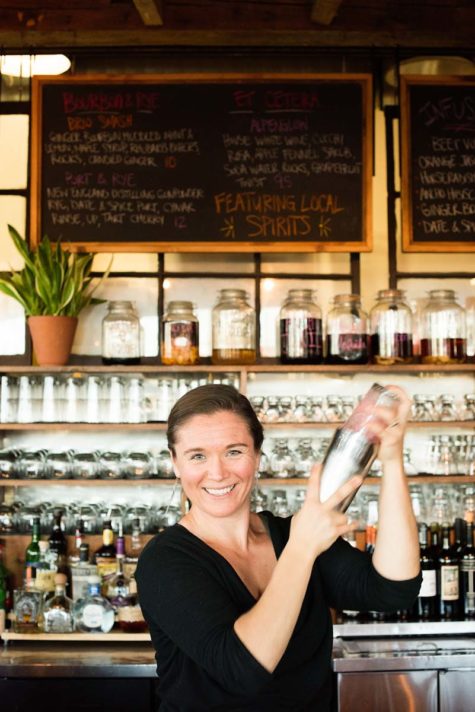 Bar Manager Erin Anderson shakes it up with house infusions for inventive cocktails. 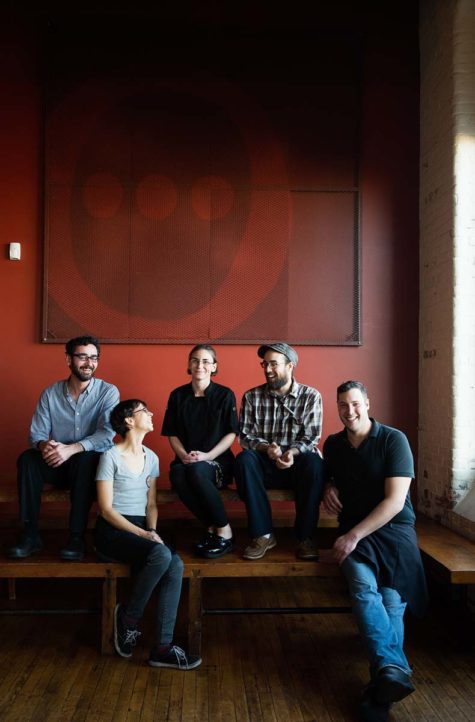 The dedicated staff is the heart and soul of Frontier, including (from left) Noly Lopez, Rocio Carrera, Kayleigh McAllister, Carlton Trott, and Taylor Smith. 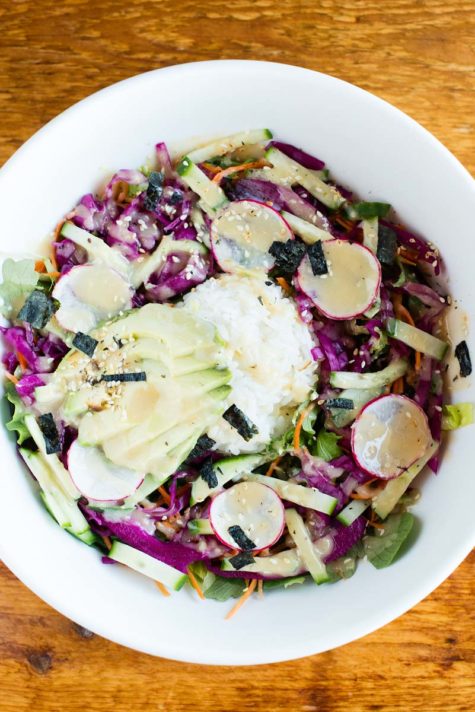 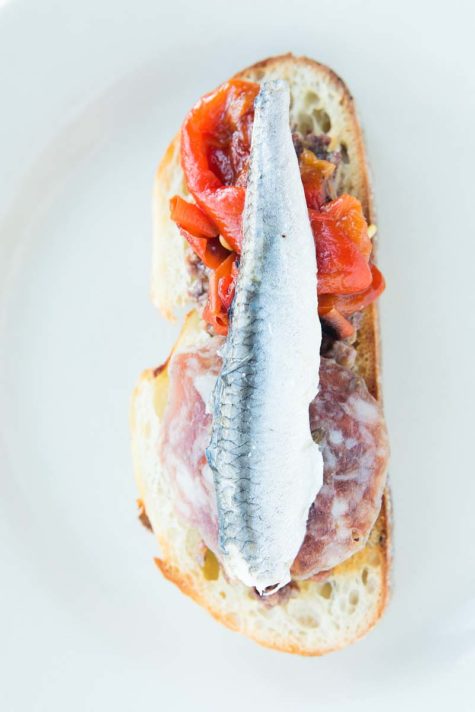