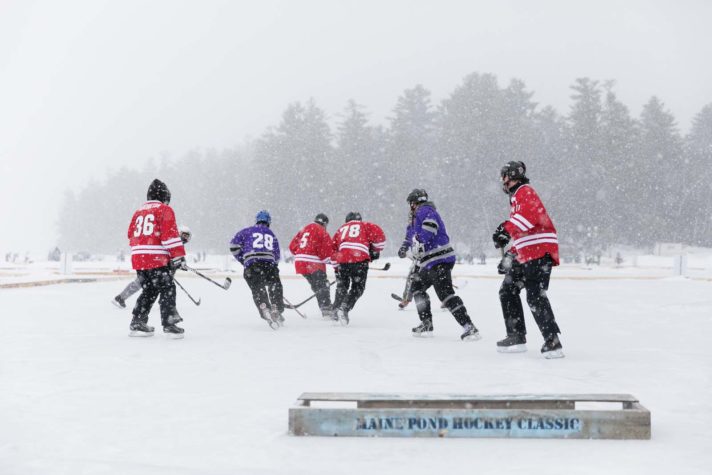 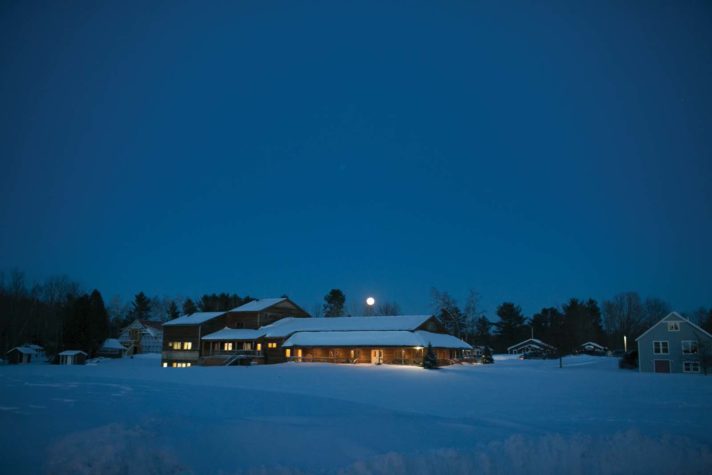 Moonrise above Alumni Hall at the Snow Pond Center for the Arts. 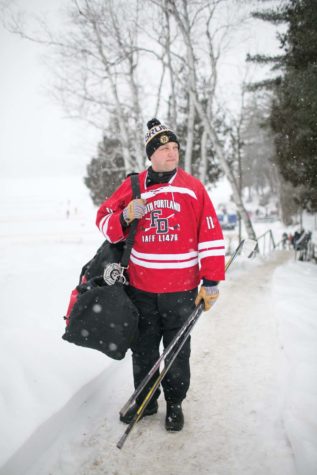 Raised in Millinocket, South Portland firefighter Joshua Perry has a longtime love of the ice. 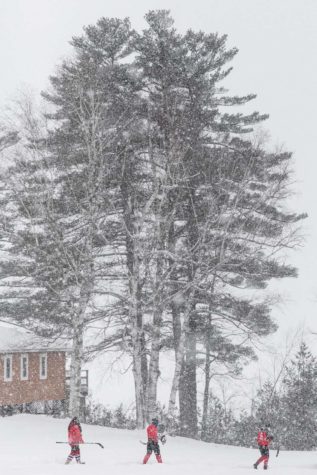 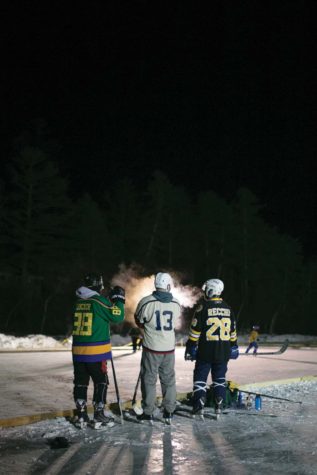 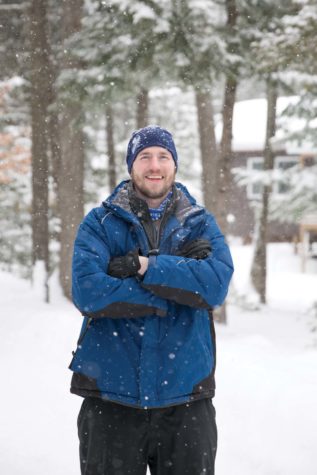 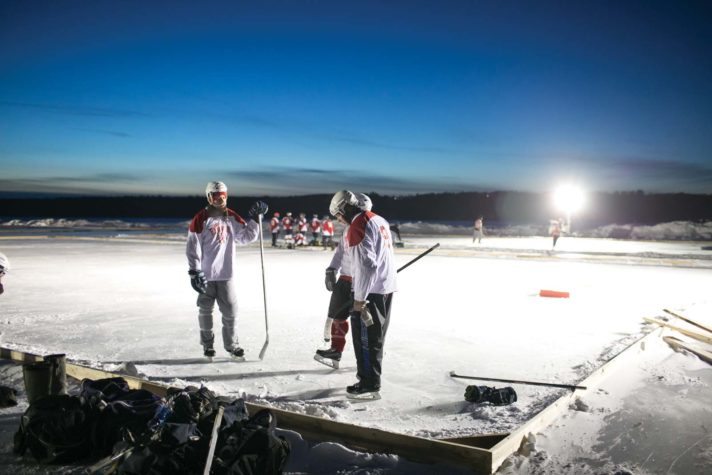 Members of the Mostly Ex-Ponies from Hermon take a break under the lights.

A luminous moon and a sprinkle of stars have emerged above the trees that encircle Messalonskee Lake. Shuffling carefully across its frozen surface, shadowy figures break through plumes of mist, as the warmth of their breath quickly dissipates in the sharp winter air. Spectators huddle around heat lamps watching well-padded hockey players get their bearings on the rough surfaces of nine temporary rectangular rinks prepared by volunteers for this weekend’s tournament. The night is silent, save for the sound of steel on ice and the occasional joyous cheer as a practice puck hits its intended target under the floodlights. The Maine Pond Hockey Classic represents a transformative elixir: the outdoor competition and camaraderie returns adults back to the way they were as schoolchildren, skating and sliding and laughing around their hometown rinks.

Founded in 2013, the Maine Pond Hockey Classic (MPHC) is a fundraiser for the Waterville Area Boys and Girls Club and YMCA at the Alfond Youth Center. It attracts participants from all over Maine as well as more far-flung locales like New Jersey, Pennsylvania, and Nova Scotia, Canada. Many of the teams are composed of former Mainers. “If you’re from Maine, there’s always something that draws you back,” says MPHC tournament director Patrick Guerette, who also works as the operations director at the Alfond Youth Center. “For people that are out of state, this is their opportunity to experience their childhood winter as an adult.” In 2017 there were 440 players on 62 teams. This number has grown every year.

“I didn’t start playing organized hockey until I was a sophomore in high school. For me, pond hockey was all I really knew,” says Guerette, who grew up in central Maine, graduated from the University of Maine in Orono, and lived for several years in Massachusetts before returning home. Guerette explains that pond hockey differs from hockey played on an indoor rink, mainly due to the variability in surface conditions. “The ice is always going to be a little imperfect,” says Guerette. “You never know what the puck’s going to do. Pond hockey really works on fundamentals like hand- eye coordination. It’s much less of a skating game and more of a passing and stick-handling game.”

Guerette suggested starting a pond hockey tournament after reading an article in USA Hockey Magazine. “There’s a grassroots movement back to that,” says Guerette. In pond hockey, “kids are touching the puck more and having more opportunities to try things and make mistakes.” When Guerette started working at the Alfond Youth Center in 2014, he met with the CEO and floated the possibility of a tournament. “The idea was fresh in my brain, and he challenged me to put it together. Five years later, here we are.”

The Alfond Youth Center offers programs to children and developmentally delayed adults in the Waterville area. These include after-school instruction, athletic activities, summer camp, and supplementary meals. Many of those who attend the Alfond Youth Center are economically challenged: 72 percent of the students in the after-school program are eligible for the federal government’s free and reduced lunch program and pay no fees to attend the center.

The tournament takes place at the Snow Pond Center for the Arts on Messalonskee Lake (also called Snow Pond) in Sidney, a short drive south of the Alfond Youth Center. For the first two years, organizers held the tournament on China Lake. As the event grew, it became clear that they would need more space for parking and other amenities. Moving to the campus of the 175-acre Snow Pond Center for the Arts has increased the visibility of the pond hockey tournament because it is close to the Sidney boat landing. “Messalonskee Lake is a very popular ice-fishing spot,” says Guerette. “We get a lot of ice fishermen who’ll say, ‘Hey, what’s going on over there? Let me check it out.’ We encourage that, because it adds something for the players, to have spectators around cheering them on.”

A series of snow-crusted staircases and shoveled paths snakes its way from Messalonskee Lake to the lodge at the Snow Pond Center for the Arts. Home to the New England Music Camp, which was established in 1937, the center also hosts the two-year-old Snow Pond Arts Academy, a free public charter high school that focuses on the performing and visual arts. This weekend the lodge has been transformed into a staging area for the pond hockey teams. Folding chairs, normally used by campers and high school students, are lined up like the waiting room of a bus station; steamer-trunk-size bags of equipment are piled high on the wooden floor. Players clad in matching oversized jerseys with their team names, such as Hat-Trick Swayze and Jurassic Puck, gather in clusters to look at the next day’s schedule. A woman tucks her blonde braid into her hat and pulls on padding as she talks strategy with a stubble- faced man who has just removed his helmet and is patting a Labrador retriever wearing a kerchief. The faint locker-room aroma of warm bodies—mostly human, with a whiff of canine—is disrupted by a gust of chilled air as another tournament registrant enters from the porch, stomping his boots to remove the winter grit.

In past years, the MPHC has erected a tent on the ice next to the rinks so that players can recuperate between games. High winds have made a tent impossible this year. Instead, people are congregating in an alternative space: a cordoned-off beer garden in an adjacent room. They seem undeterred by the change in venue, enjoying their Friday night libations as the song “Sweet Child o’ Mine” cuts through a cacophony of voices. All types of winter weather—wind, precipitation, and extremes of both warmth and cold—can impact the MPHC. Three years ago, organizers cancelled the tournament because there was too much heavy snow, which was causing the ice to break. “We learned a lot that year about what to do and what not to do,” says Guerette.

Saturday begins with flurries, and temperatures that have not yet broken single digits. Despite this, the patchwork landscape of temporary rinks—each one 70 by 140 feet, bounded by a packed snow perimeter—is alive with skaters who have begun round-robin play. Several of the teams are staying in nearby family camps that are heated only by woodstoves. They seem none the worse for wear. Each game is played in 15-minute halves, with four players per team on the ice at one time. There are no goalies guarding the “nets” made of two-by-fours. Everyone has an understanding of the rules, and good sportsmanship is expected. “Nobody goes in the penalty box unless there’s an extreme violation,” says Guerette. “A lot of it is making sure that we have mutual respect and admiration. We all have to go to work on Monday, so let’s not get anybody hurt; let’s have fun and play hockey.”

Teams register for the tournament based on their players’ level of experience. More competitive players—those who may have played hockey in prep or high school or college—choose between the Open A or B divisions. There are also a recreational division, a 40-plus division (featuring a team that calls itself the Old Buzzards), and a Just 4 Fun division.

Joshua Perry is a firefighter and paramedic for the South Portland Fire Department, which is fielding two teams in the recreational division. This morning, the red-jerseyed SoPo Fire teams are first up against Blades of Steel and Mad Hatter’s Pub. This is the second year that Perry and his colleagues have participated in the tournament. “We’re just in it to have a good time and to hang out with each other,” says Perry. “We’re a small department with three different stations and four shifts, so we don’t always get to see some of the guys. This is a great way for us to hang out together and spend time with our other coworkers.”

Perry has skated for three decades. He grew up in Millinocket. “We had a lot of lakes and ponds that we could skate on if the weather cooperated, ” says Perry. His town also had a public indoor skating rink and organized hockey teams, but he always had a fondness for outdoor ice. “You could practice different things, be creative, and just have fun with your friends,” says Perry. “You don’t have that structure and pressure from practices and games and everything.” Perry brought his hockey gear along when he joined the air force, spending three years in Montana and five years in Germany. Although he enjoyed playing out of state, “after spending eight years away I was pretty excited to come back home.”

Across the ice, a group of brave souls has gathered for the Alfond Youth Center’s yearly Polar Bear Dip. This event, which was previously separate from the MPHC, has been taking place for almost a quarter of a century. It raises money for the Kids’ Kitchen, which serves 40,000 hot meals a year to 200 children after school at the center. Many of these children say it is their last meal of the day. Polar Bear dippers sport a wide variety of festive outerwear— from chicken costumes to Hawaiian shirts—most of which is removed before they jump, in groups of two, into a hole that has been drilled through the ice. A crowd gathers to watch them plunge below the surface then climb, teeth chattering, back out again.

On Sunday, teams from the Open A and B, recreational, and 40-plus divisions continue their quest for one of the coveted MPHC awards. Neither of the SoPo Fire teams make the tournament bracket, but Mad Hatter’s Pub and Blades of Steel both continue on. Once all of the games have been played, the Mad Hatter’s Pub team will have earned itself a trophy fashioned out of repurposed hockey sticks, glued together and cut in the shape of the Pine Tree State by Kris Reynolds of Reynolds Custom Woodworks in Winslow. The Ducks, the MAHL Saints, and the Punishers receive top honors in their respective divisions.

For Perry and other players, the experience of playing hockey outside with friends makes the tournament worthwhile, win or lose. “Growing up in Maine, as cold as the winters are and as much snow, you’ve got to get outside and enjoy it.” He hopes that his young son will someday feel the same way. “We’re out on the pond two blocks from our house, and this is the first year he’s really been interested in skating. To watch him take his first skates was almost as proud of a moment as watching him take his first steps.” 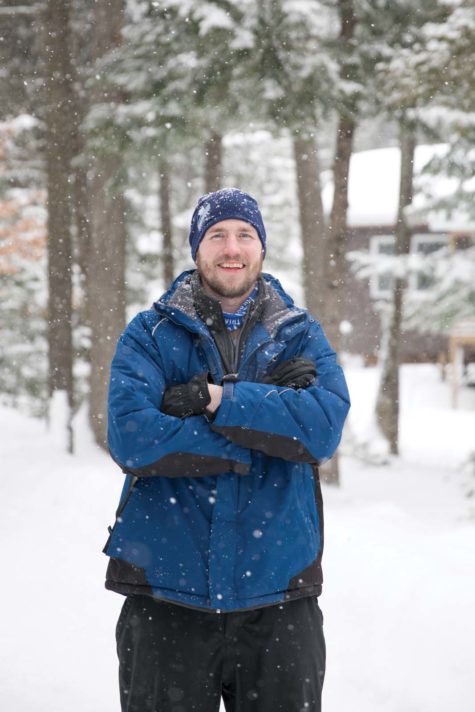 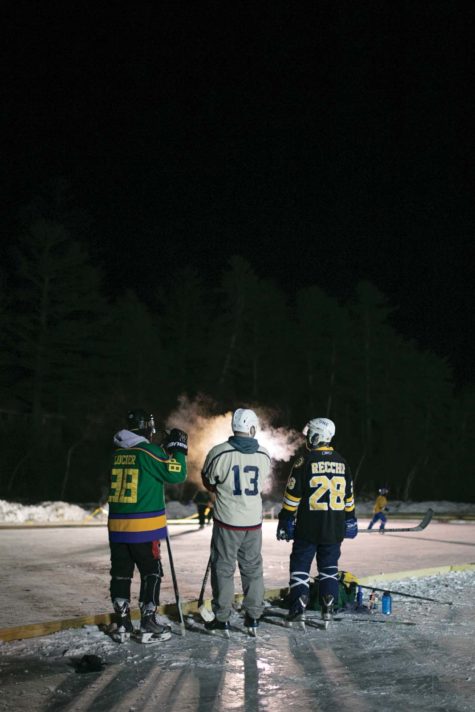 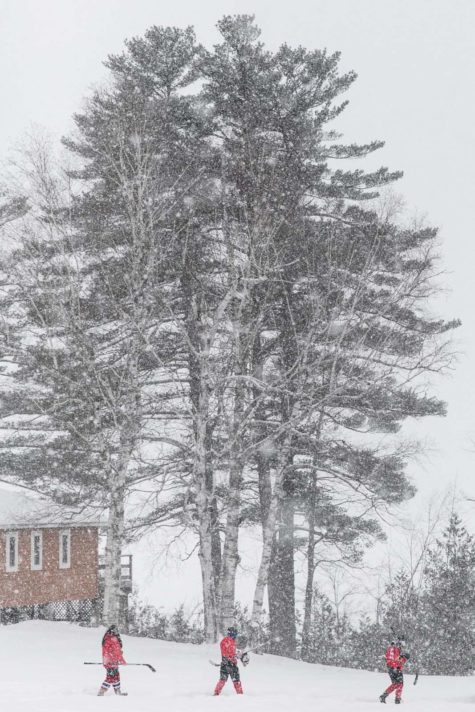