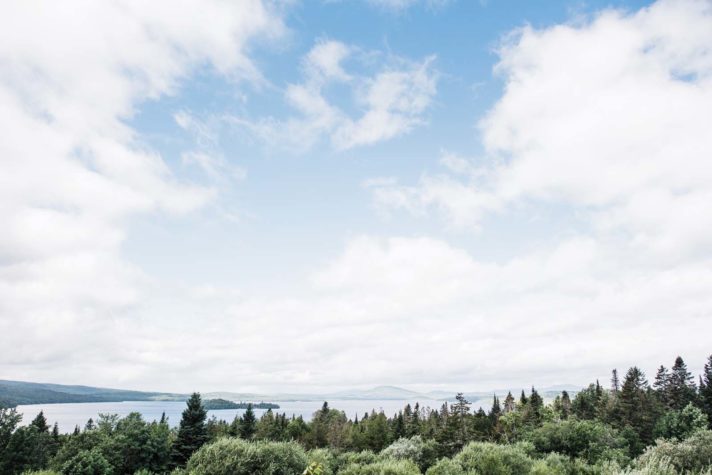 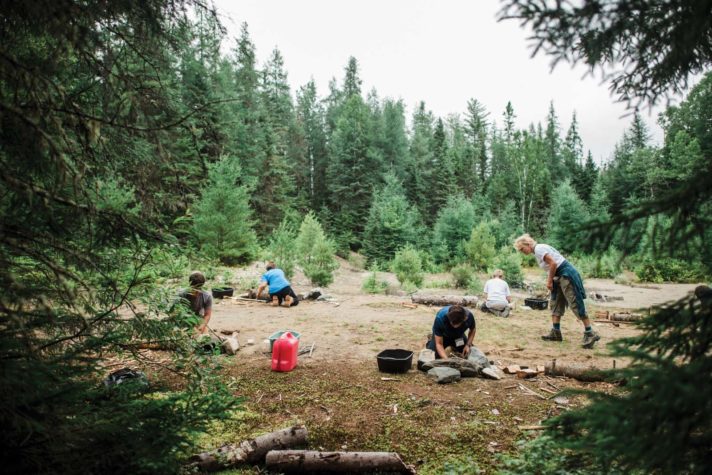 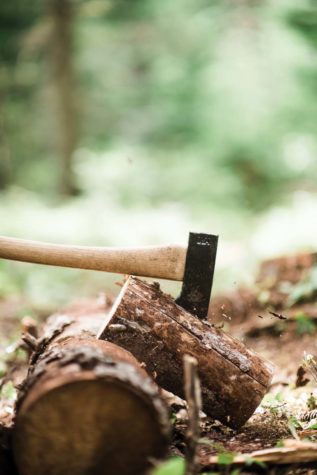 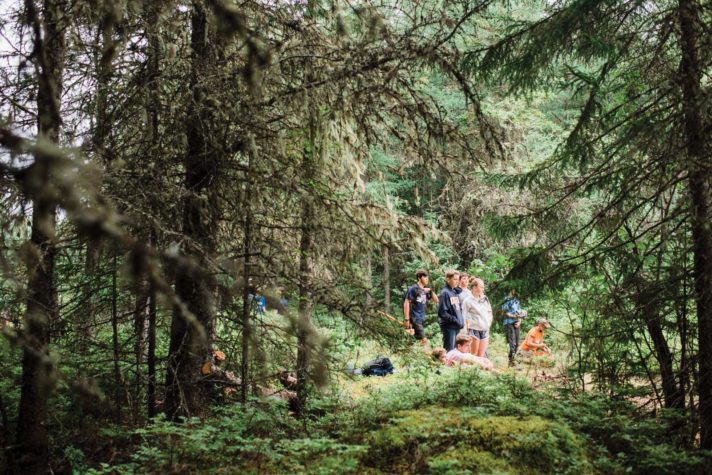 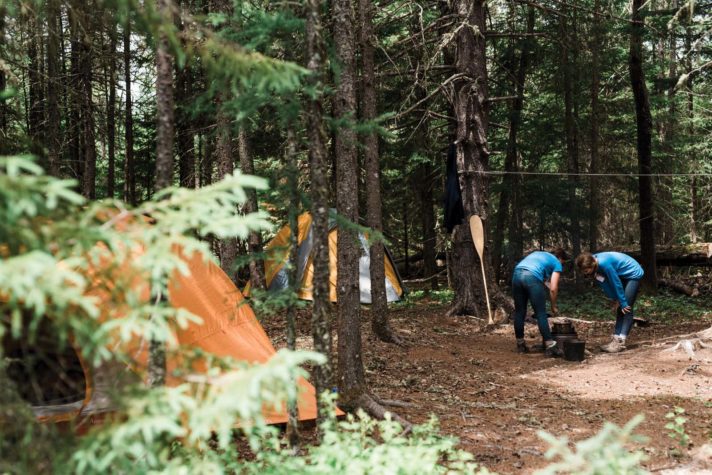 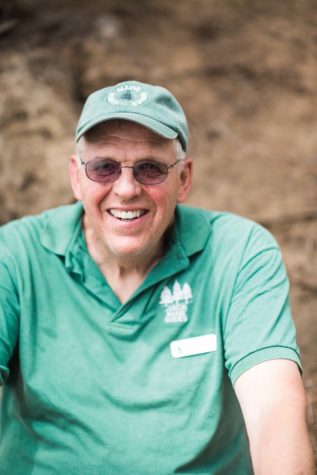 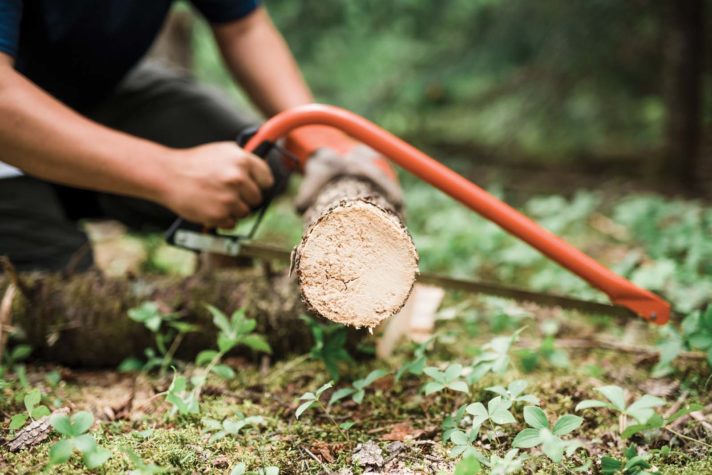 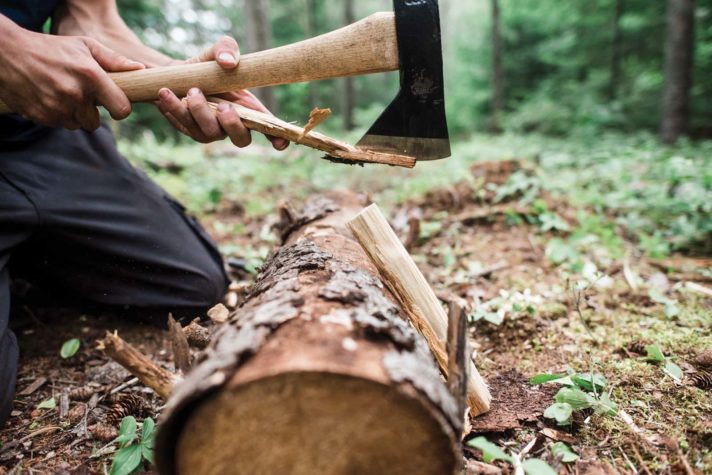 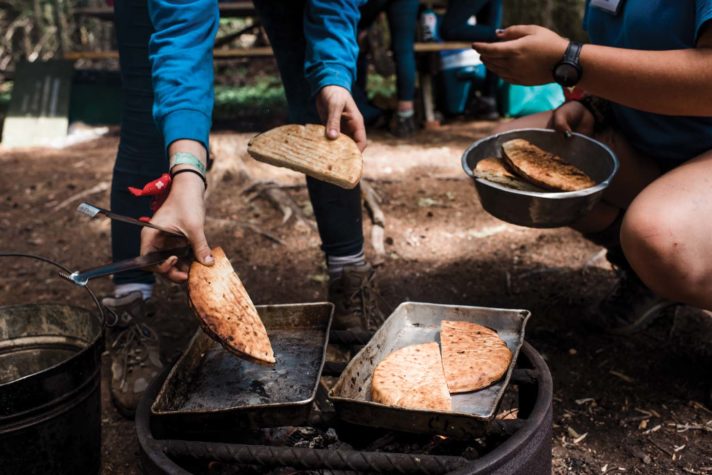 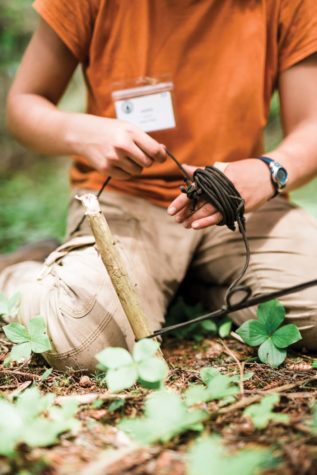 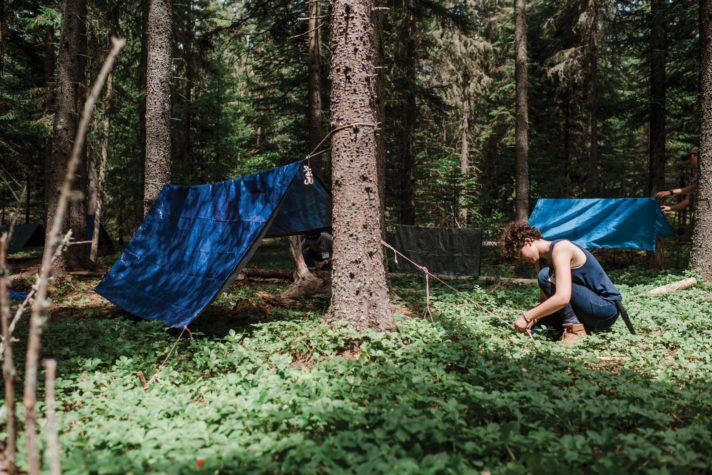 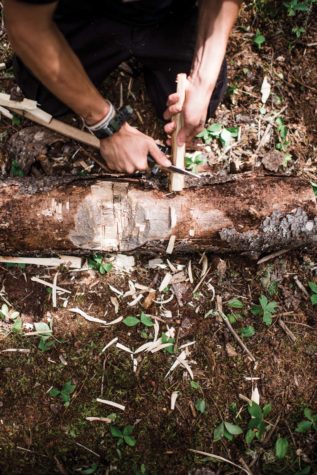 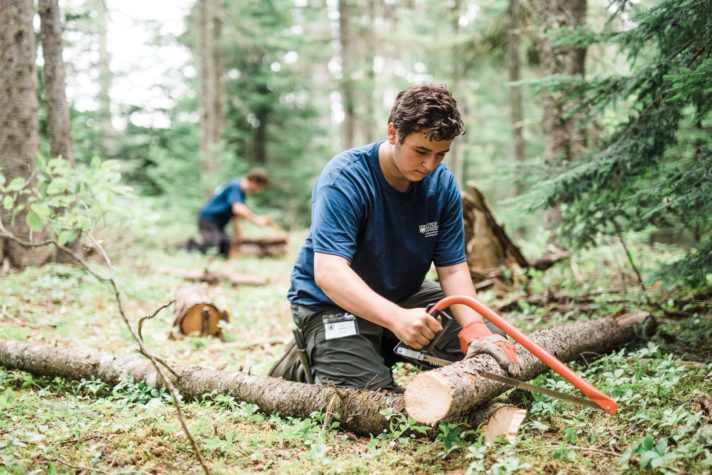 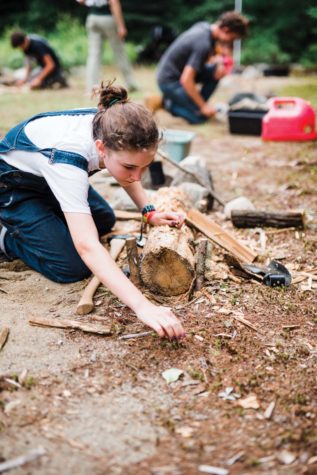 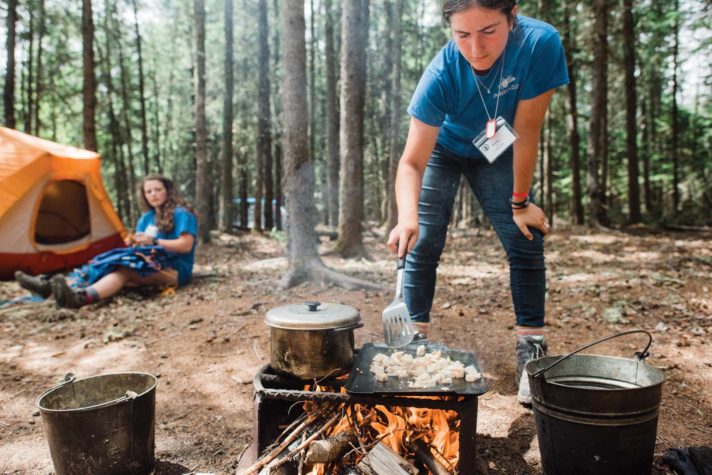 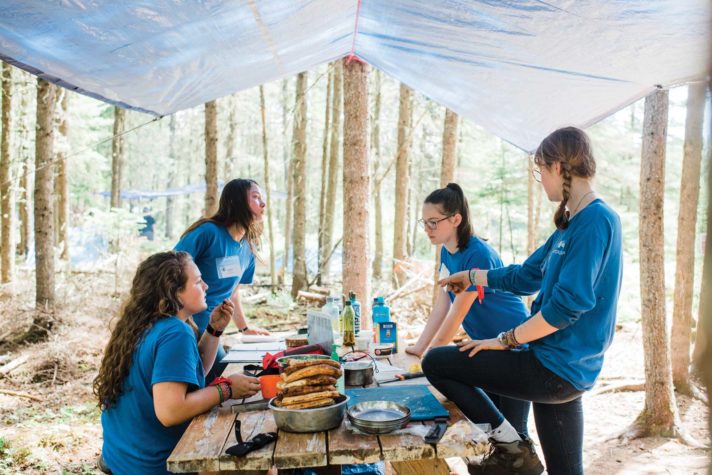 The Maine Camps Program Guiding the Next Generation

Deep in the woods of Oquossoc, determined teenagers are hunched over small piles of smoking wood. The late-July sun is high, and the kids are sweating as they hack at water-soaked chunks of wood, cutting them into ragged pieces of kindling. They stuff more pieces into their piles and crouch low to the ground to blow at the base, hoping to spark a flame using only the wood and some matches. Over each pile of wood hangs a small open can of water, supported by structures and mechanisms made by the campers. If they can make a fire and get the water to boil within 20 minutes, they pass the test. The clock starts the moment they pick up their ax and a wet piece of wood.

Some of the teens are getting frustrated as they blow harder and harder at their smoking piles. A Junior Maine Guide Program tester paces between the two rows of students, stopping here and there to check the campers’ progress. A fire finally catches for one girl, and she puffs on it as it reaches up and licks the bottom of the can. The tester stands nearby, stopwatch in hand, and watches as the water boils over the edge of the can. The girl jumps up, a wide grin across her sweaty face as the tester reveals her time: 18 minutes, 34 seconds. She’s handily beaten her previous time of 23 minutes.

Around her, other cans start to boil over. When the tester calls time, one boy is still crouched on the ground with his knees in the dirt. He sparked a fire, but it’s weak, and his water hasn’t reached a boil. He lowers his head and wipes at tears rolling down his cheeks. He can try again next year, but for now, he’s failed the test.

The wet-day fire, meant to simulate having to start a fire after a rainstorm, is one of 21 tests each hopeful Junior Maine Guide needs to pass in order to become certified.

Around 70 campers 14 to 18 years old spend five days each summer at a testing camp in Stephen Phillips Memorial Preserve, just outside of Rangeley. The program, which has certified over 2,800 Junior Maine Guides since it began in 1937, is sponsored by Maine Summer Camps and the Maine Department of Inland Fisheries and Wildlife. The program is often a stepping-stone to becoming a Registered Maine Guide, a designation that certifies someone to take people on guided wilderness adventures and outdoor sporting trips. “For a lot of people, once they’re in the program, they’re hooked,” says John “Moose” Curtis, director of the Junior Maine Guide Program. “Some people say it’s life changing. For me, it became my career choice.”

Curtis is a tall, broad-shouldered man with a gentle yet commanding presence, living up to the nickname his brother gave him in sixth grade. Most of his 69 years have been spent outdoors exploring the Maine wilderness and teaching kids how to do the same. Originally from Rhode Island, he became a Junior Maine Guide while attending Camp Winona in Bridgton, then spent 25 years working at the camp as a trip leader and Junior Maine Guide counselor. During that time he became a Registered Maine Guide, a designation he’s held for almost 50 years, and he became a teacher, coach, and outing club leader at Hebron Academy, where he worked for 40 years. Curtis has been the director of the Junior Maine Guide Program since 1978. “I don’t want the program to get stale under my direction,” Curtis says. “I’ve told the rest of the staff they can kick me out if they want.”

No one—not the staff, testers, or campers—seems to want Curtis to leave any time soon. His knowledge of Maine and the outdoors is vast, and his love for the job is palpable. Having been involved in the program for over half of its existence, he’s deeply embedded in its history. When the program first started, the testing was done in Bridgton for many years. It then was moved to Swan Island in Richmond, where Curtis says campers were required to dig latrines for bathrooms. After 20 years, the testing program moved to Stephen Phillips Memorial Preserve, where it’s been for almost 12 years. The conserved land is also used for camping and by local Boy Scouts troops. The Junior Maine Guide Program is allowed to use the land as long it continues to provide outdoor education, which, as long as the program exists, will remain its mission.

Teaching outdoor education is complex, and the Junior Maine Guide Program is so strenuous that most of the campers need to come back for a second year. Curtis says, while kids are disappointed if they don’t pass, it usually motivates them to do better the following year. “They’re excited to come back,” he says. “They attack it.” Second-year campers also tend to informally lead the first-years. According to Bill Southwick, a member of the program staff, the pass rate is 35 to 40 percent the first year and 50 percent overall. Two-thirds of those who pass are girls. “A 14- to 15-year-old girl is way more developmentally advanced than a boy her age,” Southwick says.

The atmosphere around the reserve isn’t competitive, though, as the campers are only in competition with themselves. In fact, working together and being part of a team is part of the testing. In 2018 campers came to the program from eight different summer camps, where they trained and prepared for the test. Across the state, 20 camps offer Junior Maine Guide training, but not every camp has students to send each year. The campers are split into groups based on their summer camp. Each group works together to build and maintain its shelter and cook three meals a day. Everyone has to contribute, and each is scored individually by a tester.

Preparing meals is an essential element of the program because part of a Registered Maine Guide’s job when taking people on trips is to cook for them.

The teens all pack coolers back at their overnight camps with everything they’ll need for the week. And their meals aren’t typical teen food or camping grub: the campers make more elaborate dishes, such as steak, spaghetti, and soup. They decorate their tables with flowers and set out ripe berries, freshly brewed coffee, and orange slices. And they do it all on their own, with no help from adults. “It’s a wonderful challenge and sense of accomplishment for them,” Curtis says.

The 21 tests are split into majors and minors, with majors including skills such as axemanship, canoeing, shelter building, map and compass work, cooking, and first-aid. Minors include identifying trees and wildlife, wet-day fire making, hiking, backpacking, and other general outdoor skills, such as caring for the environment and knowing what to do if lost in the woods. Some of the tests require a physical demonstration while others are written exams. Any major or minor passed in a camper’s first year carries over if they need to come back the following year, but for some majors they need to demonstrate that they retained the skill, either by answering questions or doing a small portion of the test. Lindley Brainard, who completed the Junior Maine Guide Program as a teenager and is now a tester, says the program thoroughly prepares kids for anything they could encounter while exploring the outdoors. “It’s more than a wilderness or outdoor program; it’s a leadership program,” she says. “It gives you the confidence to handle any situation, from an emergency to just something you haven’t experienced before.”

Curtis says it’s encouraging to see teenagers so interested in the outdoors and in developing leadership skills, especially when there are many other ways they could be spending their summers. With the development in technology over the past few decades, he says, outdoor education is becoming increasingly important. “Those kids who don’t get outside, boy, they’re missing out,” he says. That’s not to say the kids going through the Junior Maine Guide Program don’t enjoy their phones or social media. Cell phones aren’t allowed during the testing encampment or at some summer camps, but over the past several years Curtis and other staff members have seen an uptick in anxiety among participants who have never lived in a world without social media and the internet, mostly due to being disconnected. Curtis says the program forces kids to live in the present moment, and not having phones helps them form more meaningful connections with each other and with the outdoors.

The program also helps the campers understand themselves better and learn how to be independent. The adults working in the program are there to observe and support the campers, but they don’t directly help them or intervene in their work. “The youngsters need to be supervised, but there’s distance,” Curtis says. “They have to be self-reliant. It’s such an essential part of growing up.” In that sense, the program prepares the teens for life in general and not just life outdoors. The hope, Curtis says, is that they’ll use the skills they learn as Junior Maine Guides in all parts of their lives, over their whole lifetimes.