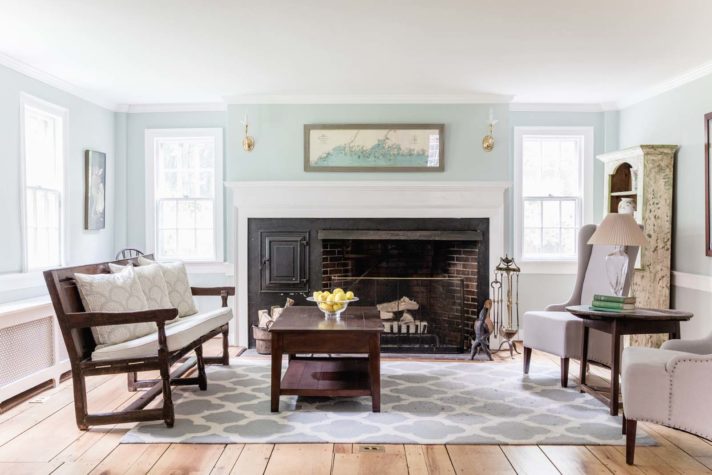 The sea foam green living room has a slightly more formal feel than the rest of the house. The Leahys use this area for entertaining guests during the holidays. 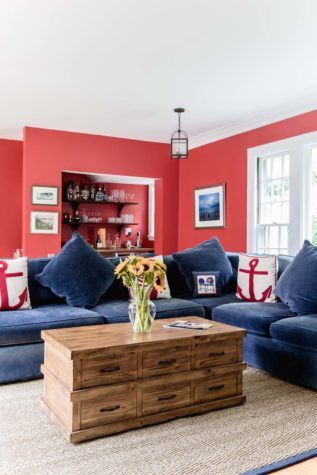 With bold red walls, a built-in bar, and big windows with views of the yard, this family room is often used for casual entertaining. 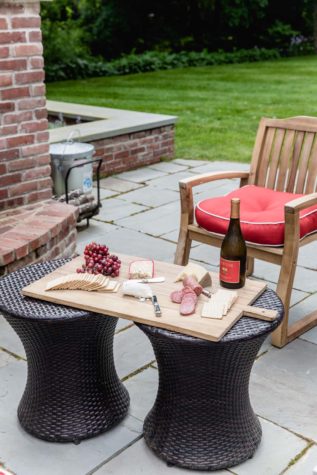 In the renovation, the Leahys added several outdoor dining spaces, including this back patio. 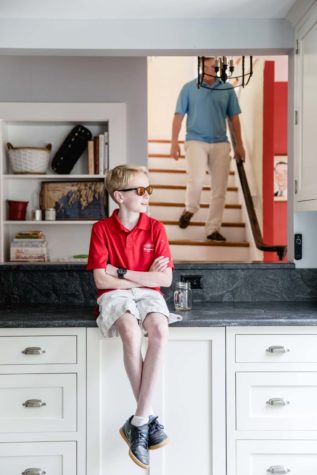 Duncan Leahy sits on the counter as Mac Leahy descends the stairs into the kitchen. 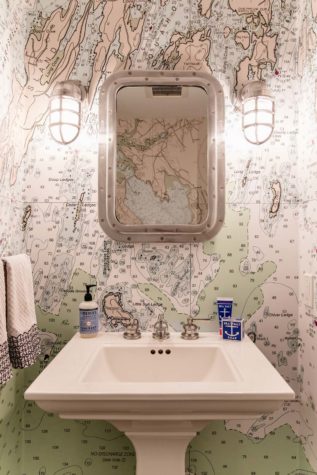 The bathroom wallpaper is a custom print made from a map of Casco Bay. 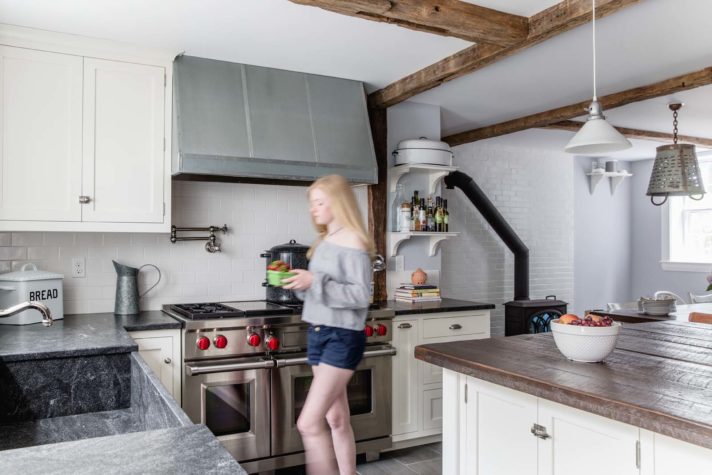 Winnie Leahy pictured in the renovated kitchen. During the remodel, the Leahys decided to keep many features of the original home intact, including the hardwood beams. They added the granite countertop and sink. 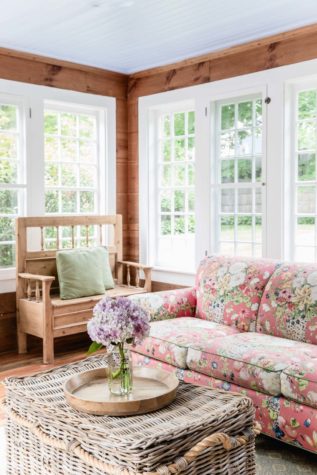 The furniture in the house is a mix of antiques and newer pieces. The sunroom showcases Leeann’s classic yet unfussy personal style. 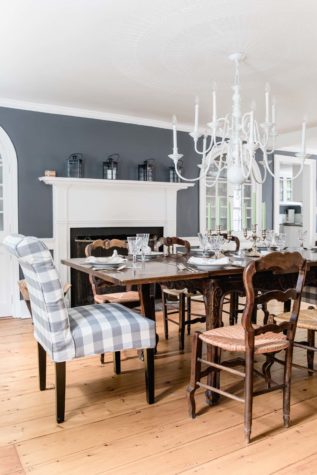 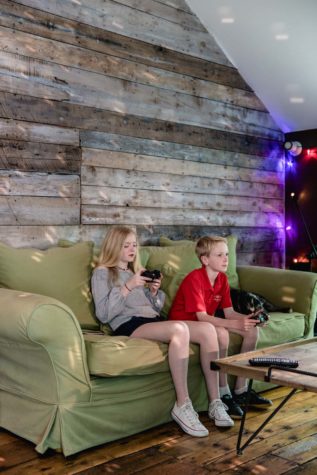 Winnie and Duncan play Xbox in the rec room under the glittery lights of their working disco ball.

A creative couple discovers layers of history (and loads of character) in a dilapidated eighteenth-century mansion in downtown Yarmouth.

In Leeann and Tom Leahy’s house, in the downstairs powder room against a backdrop of cherry-red seahorses and blue mermaids, hangs a framed real estate advertisement. “An Old Shipmaster’s Mansion,” it reads. “Built in 1792, restored in 1921, and located in the heart of the old shipbuilding country.” At the bottom of the paper, below black- and-white photographs of the stately Federal-style structure (obscured by unruly rhododendrons and out-of-control lilacs), a price is listed: $25,000.

“We think it’s from the 1950s,” Leeann explains. “But can you believe it?” The price was shocking, but then again, so was the state of the house when the couple first saw it. After being a beloved family home for over 30 years, the house had been purchased by a couple who never moved in, and it sat empty for four years, which gave the harsh Maine weather plenty of time to work its charms. “It was in terrible condition,” she says. “When a house doesn’t have someone living in it and loving it, it can fall apart quickly. But when we were looking for houses, we saw so many lovely homes, and yet a lot of them didn’t feel like Maine to me.” In spite of the rusted pipes and the yard choked by weeds and punctuated by rotting tree stumps, the white-painted house felt different from all the other Colonials and cottages for sale. “It pulled at our heartstrings,” Leeann says, as she sits in the red-painted family room. “It had all this character and all these stories to tell.”

As the CEO of the VIA Agency in Portland, Leeann is in the business of telling stories, but it was her husband, Tom, who ultimately pushed forward on the sale. “Everyone in Yarmouth knew about this house,” he says. “People kept saying, ‘Oh, it’s too bad about that house.’” But Tom, who is on the board of Maine Preservation, a nonprofit organization based in Yarmouth, saw the home’s potential. And after repeated viewings, Leeann began to see it, too. “Once I realized we could take out the wall that used to be here, that we could really open this space up—then I knew I could do it,” she says. “But still, it was a project and a half.”

It was important for the couple to keep the character of the home intact, but they did need to renovate and update the shipmaster’s home. “People were much smaller back in the 1700s, and much of the house felt really small to me,” says Tom. “He had to stoop to go into some of the rooms,” adds Leeann, who serves on the Portland Museum of Art’s Board of Trustees. While the miniature rooms had charm, they simply weren’t livable. The Leahys brought in residential designer Travis Kinney of Gulf Shore Design in Scarborough to draw up plans for a more spacious interior, and hired Paul Moutal of Flying Point Construction in Topsham to oversee construction. Together, they dropped the floors down, took out a crawlspace, and gained 18 inches of air. “We took the kitchen down to the dirt,” Leeann says. “We found some really interesting things down there, like vintage apothecary bottles and a petrified squirrel.” They also removed the servants’ staircase, rebuilt the entire kitchen, mudroom, laundry room, and powder room area (in order to set them on concrete slabs, which provide radiant heat throughout the floors), and finished part of the barn/garage to serve as a rec room for their three teenage kids. “We didn’t change the overall footprint of the house—we just changed the flow,” says Leeann. “We favor restoration over renovation, which is why we kept the oldest part of the house to its original character and updated the newer sections to be more livable for today’s life.”

As these projects were going on inside, a similar overhaul was happening outdoors. Over the years, the lot had descended into verdant chaos, with overgrown plants hiding still more relics. Under a six-foot-tall thicket of weeds and raspberries they found the remains of an old, collapsed caretaker’s cottage. “We did decide to keep that quince,” Leeann says, pointing toward a pretty flowering tree. “It’s old, old, old and it shows up in a lot of the pictures.” They also kept the hostas, which were growing wild around the yard, as well as the peonies, lupines, and phlox. “Wherever we could, I wanted to keep the original plants, so the first thing I did in the yard is move the plants around,” she says. The result is a carefully sculpted yard with boxwood hedges, a brick patio, and plenty of lawn space for games of croquet. An outdoor fireplace sends up “smoke signals” to friends. “I often tell people, ‘If you’re walking through town and you see smoke coming from our backyard, that means we’re welcoming guests,’” she says. A typical party at the Leahy house includes wine, cheese, and dancing under the disco light in the barn. “We’ve already had tons of great nights by the fire,” says Tom, “and tons of fun dance parties.”

“I think the builders thought I was a little crazy when I asked for a working disco ball,” Leeann says. But somehow, such funny little details go well with the historic house. After all, many old houses have their own little quirks. “We discovered early on that we have our very own birthing room,” Tom says. “We ended up turning it into a powder room.” Other things remain unchanged from the house’s early days, like the kitchen posts, which are decorated with notches that were once used to tie up livestock, and the butler’s pantry. “Many of the early plans we saw suggested we take out the butler’s pantry to make the kitchen bigger,” Leeann reveals. “But I knew I wanted to keep it. It seemed true to the house, and I wanted it to stay that way.” Similarly, the couple has decided to forgo curtains, leaving their windows bare (save for the black-painted shutters, which are never closed). Curtains, Tom says, wouldn’t have been a feature of the home decor 200 years ago.

Although there are many thoughtful touches scattered throughout the house, from the custom printed wallpaper designed from a map of Casco Bay to the chicken coop wire shelving to the Turkish olive basket lamps, Leeann’s favorite feature is, rather fittingly, an idiosyncrasy created by Mother Nature. “Look at this,” she says, placing her finger on the gray granite kitchen countertop, above a heart-shaped flaw in the stone. “Someone pointed it out to me, and I thought it was this very cool little happenstance. It’s proof that we restored this house with love. Whenever we found little things like that, we decided to keep them sticking out—it adds character. 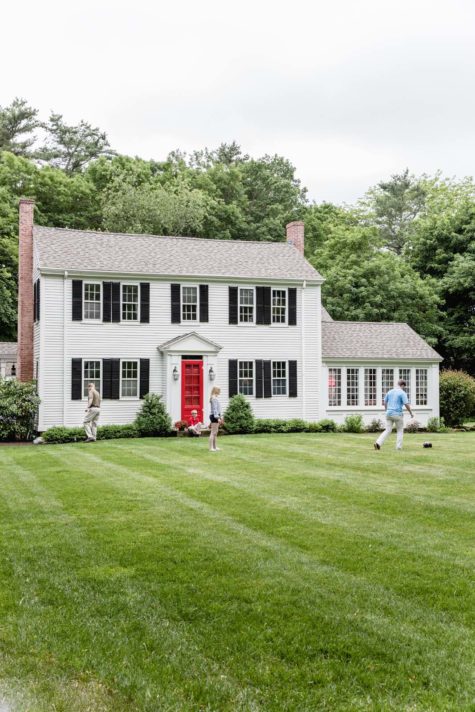 The Leahys always knew they wanted to keep the traditional appearance of their Yarmouth home—hence the white clapboard, black shutters, and classic red door. 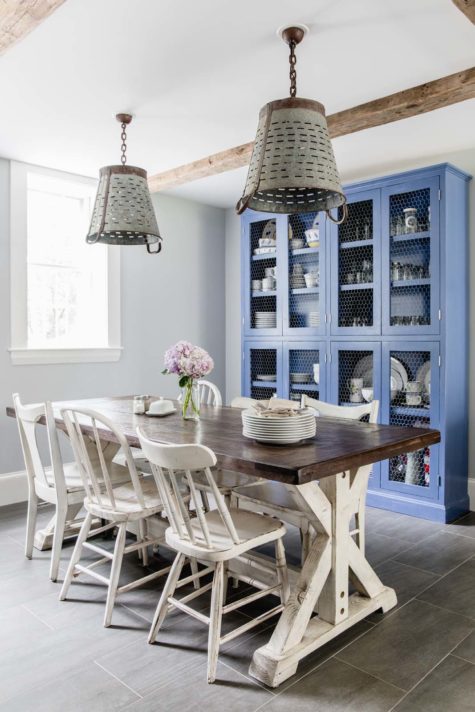 Above the dining room table hang lamps made from Turkish olive baskets. 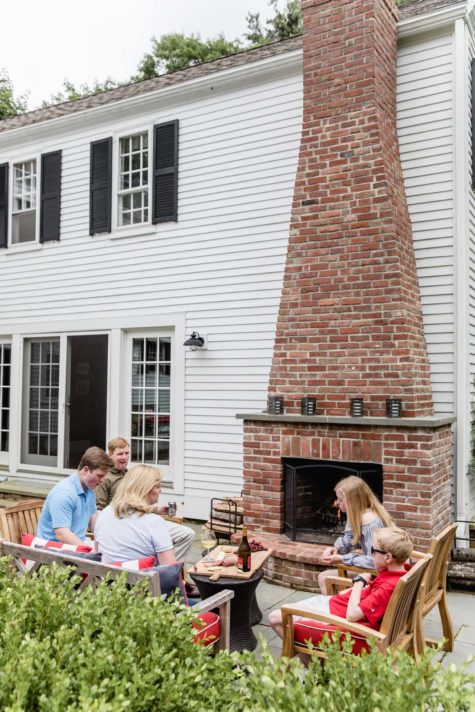 Boxwood hedges create definition in the backyard, where the Leahy family frequently gathers for dinner during the warmer months.