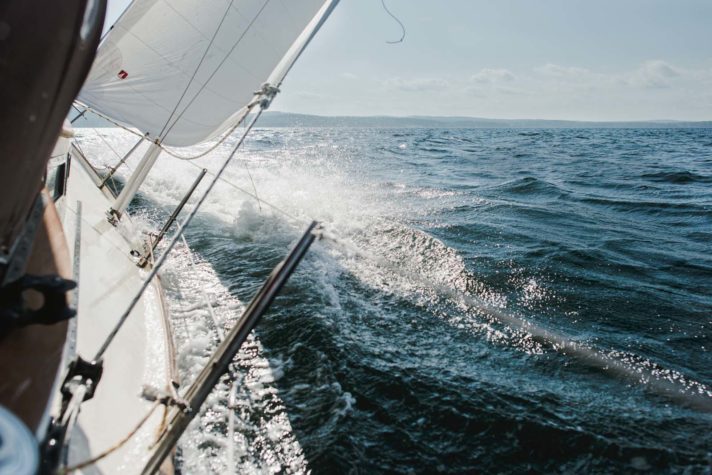 A bright, sunny day of sailing off the coast of Northport. 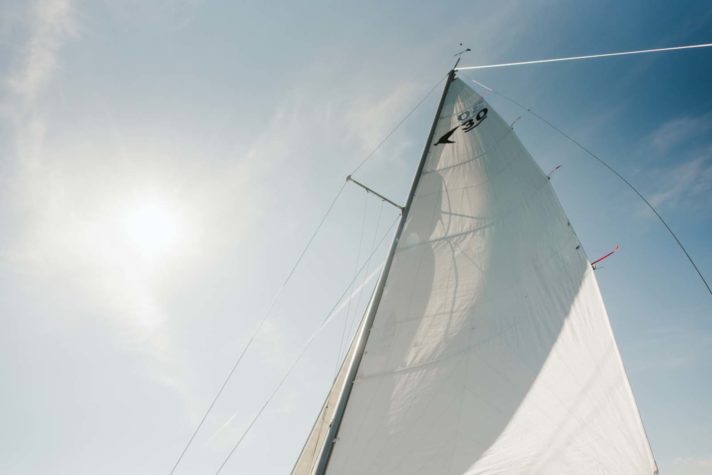 Bohndell Sails, which has been in business since 1870, makes, repairs, cleans, and stores sails. 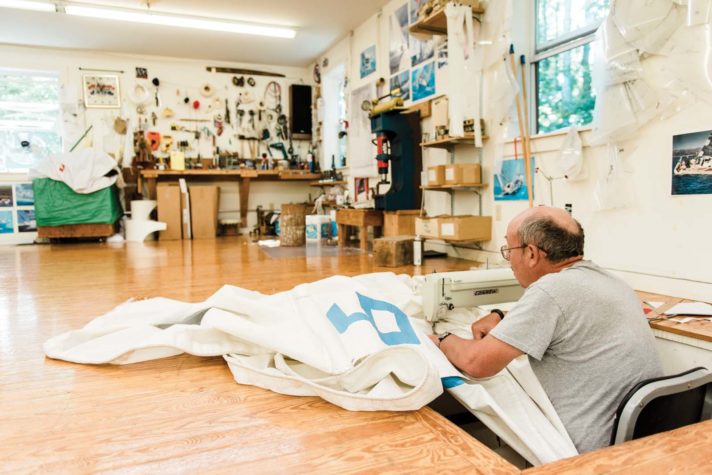 Vince Bemis, who has worked at Bohndell Sails for more than 30 years, makes a repair on a sail in a pit at the shop. Bohndell Sails makes sails of all sizes and creates custom orders. 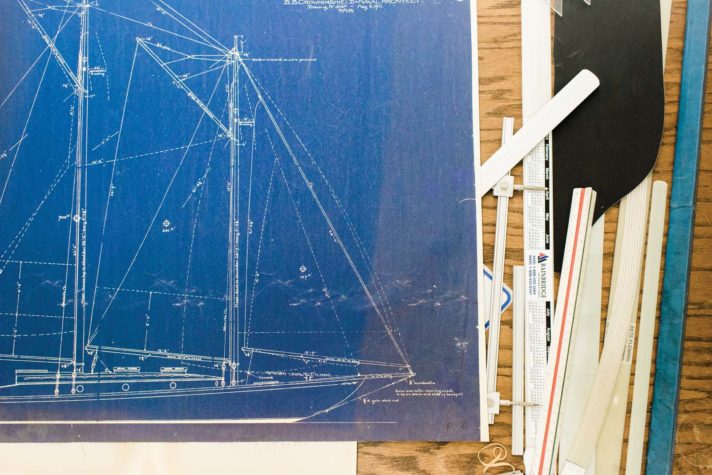 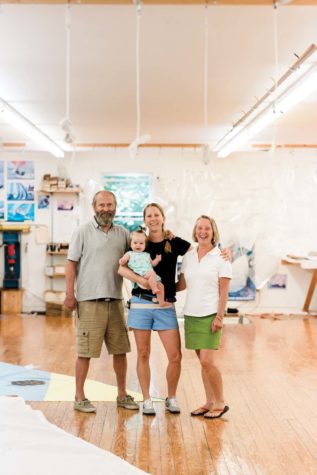 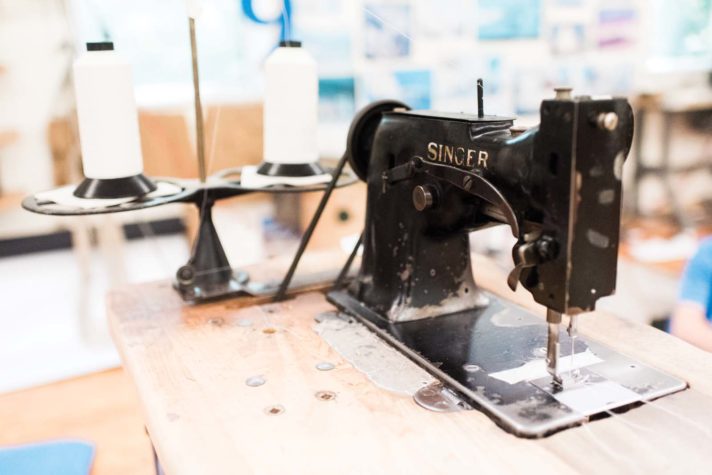 The sewing of sails is done on small sewing machines, not large industrial ones. 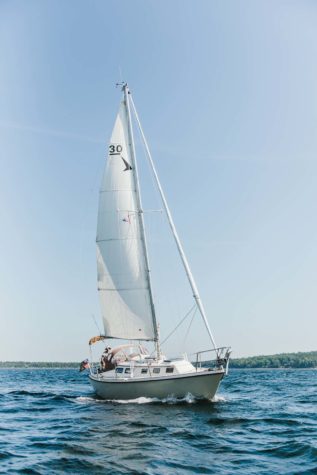 Jon Linn, a Bohndell Sails customer and family friend of the Chaces, sailing his boat. 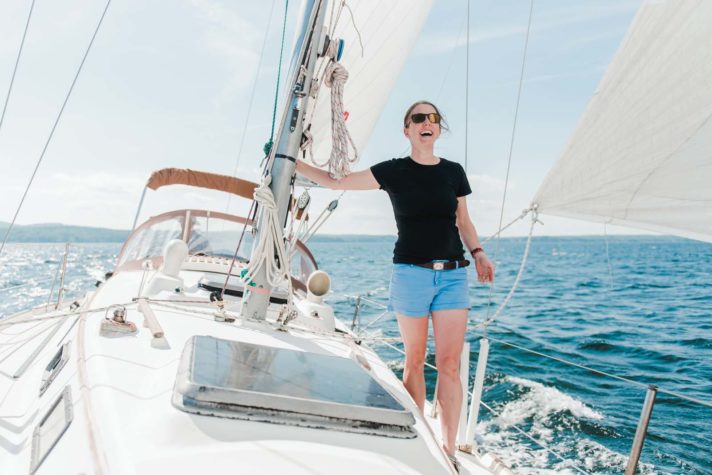 Payson, who grew up in the shop, says it was natural for her to take over the business because sailing is in her blood.

With Bohndell Sails’ legacy of almost 150 years hanging in the balance, Robin Chace Payson steps into a role she never expected

In the basement workshop of Bohndell Sails last August, Robin Chace Payson was inspecting ropes and cables hanging on a wall when a customer came down the stairs. He needed his rigging repaired because the end of one cable had started to fray. Payson inspected the snarled tangle of sharp wires before cutting a clean edge. She then looped it around a teardrop-shaped thimble and slipped a metal sleeve over the exposed end. To secure it in place, she carried it to over to a wooden countertop and placed it in a press. Using her bodyweight, she pushed the large handle down and compressed the metal to the cable. As she gritted her teeth and clenched her muscles, her five-month-old daughter, who was in a carrier strapped to Payson’s chest, giggled and babbled, oblivious to the strenuous work being carried out by her mother.

Repairing rigging is hard enough without a baby to carry around, but Quincy doesn’t slow Payson down. Quincy is pretty much an honorary employee at Bohndell Sails, which makes, repairs, washes, and stores boat sails. The infant seems perfectly happy surrounded by tools, equipment, and sailcloth, and Payson has grown used to working with her daughter by her side or attached to her body. Adapting to the circumstances and taking the less conventional route have become a way of life for Payson.

Payson started working full-time at her family’s Rockport-based sail company in April 2016 after taking over operations from her father, Bob Chace, who owns the company with his wife (and Payson’s mother), Sue Chace. Running the business was never the plan for Payson, who, despite growing up in the shop, intended to have a career in the ski industry. When two men started inquiring about purchasing Bohndell Sails from the Chaces, though, Payson felt something stir inside her. “I had this huge reality check,” she says. “It surprised me that I reacted that way.”

Payson grew up in Rockport and worked in Colorado for six years as an alpine skiing coach after graduating from the University of Maine at Farmington. She moved back to Maine in 2013 to become a schoolteacher, but her plans shifted when a friend offered her a coaching job at Carrabassett Valley Academy at Sugarloaf. She met her husband through the job, and the two settled into a happy life working together at the mountain. Payson was there for three years before a swell of nostalgia called her home. The potential buyers, who at that point had been asking about purchasing the shop for a number of years, were in the process of closing the sale when the deal fell through. They backed out, and Payson knew she had to act fast before another buyer came along. “I thought, ‘If I don’t want someone else to do this, why don’t I do it?’” she says. “The classic, ‘If not me, then who?’”

Keeping Bohndell Sails in the family was important to Payson, not only because she was raised in the shop, but because of how much sailing means to her. “My whole life has been skiing and sailing,” she says. “Skiing has always been something I did, but sailing is in our blood.” There was also the legacy of the business to consider. Bohndell Sails opened in 1870, making it possibly the oldest sail-making company in the United States. “The history blows me away,” Payson says. “It always has.” The Chaces are only the second family to own it. Bob Chace purchased it from Henry Bohndell, the grandson of founder E.S. Bohndell, in 1979 after working at the shop for a decade. Almost 40 years later, Payson took over the company at 31, the same age her father was when he purchased it.

Running a company with such a long history and strong connection to the community comes with high expectations. “There’s a lot of history that I’m both up against and working with,” Payson says. Many customers have been coming to the shop for generations, and they tend to dislike changes; on the other hand, it helps to already have a large customer base, she says. “There’s a lot of pressure to hold up a legacy 148 years in the making,” Payson says. “It’s important to make sure customers get the same level of service they’ve always been getting.” Customers drop their sails off each fall to be stored and pick them up again each spring, and often come in during the summer for repairs. While summer is the busiest time of year for Bohndell Sails, the shop is open year-round. The colder months are spent working on orders and making sails.

Most of this work comes naturally to Payson, as she’s spent her whole life preparing for a role she didn’t expect to step into. As she totes Quincy around the shop, she recalls her own childhood watching her dad sew sails and make rigging. Bohndell Sails was originally located across the street from its current location, where it’s been since the mid-’90s, and a young Payson was there every day until she learned to crawl. At that point, she began getting into the trouble only a toddler can find, reaching for dangerous tools and getting too close to the sewing machines, which sit with their bases below floor level so the large sails can be spread out around them. Now a mother herself, Payson knows her daughter will be getting just as curious and adventurous as she once was. Fortunately, having a family business means Payson has a built-in support system. Her aunt often stops by during the day to relieve her and take Quincy for a walk, and her parents are close by as well. “It’s extremely difficult to do both jobs well,” Payson says of being a new mother and running a business. “It really does take a village.”

Having her family close by has also helped Payson transition from her experience at the shop as a teenager during summer vacations and after school to running almost every aspect of the business. Payson’s mother still does the bookkeeping and payroll, and her father offers tips and advice as questions arise. She says she couldn’t do the job without them. A lot of Payson’s technical skills have been honed over the years, though, by doing the work herself or watching her father. “You can’t just YouTube this or Google it,” she says. There are two non-family employees at the shop, including head sailmaker Vince Bemis, who has worked at Bohndell Sails six months longer than Payson has been alive. Payson says she’s proud of herself for being able to do the work and hold her own, especially in a field dominated by men. “You’d be challenged to find another female rigger in the U.S.,” she says. “There’s certainly no other rigger breastfeeding in the boatyard.”

Having Quincy in the boatyard and in the shop is important to Payson because they get to spend time together, and Quincy gets to see the business up close, just like Payson did as a child. There won’t ever be pressure on the littlest member of the Bohndell Sails team to take over one day, but if she’s anything like her mother, the sailing industry will become inseparable from her identity. “It feels great to come in every day,” Payson says. “This is home to me. This is part of me and my family, and now a part of Quincy.” 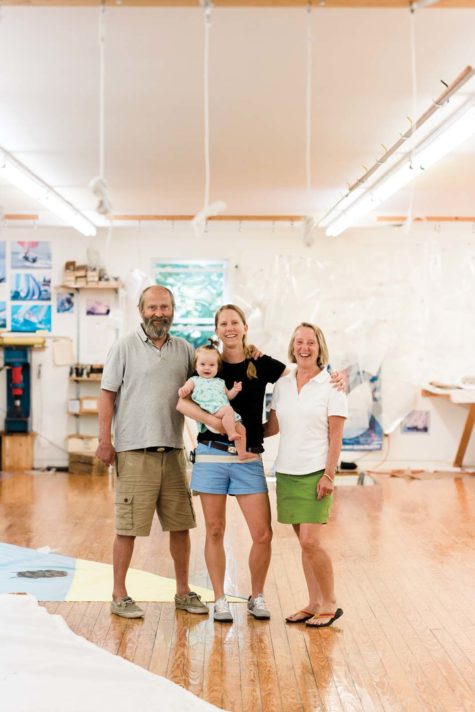 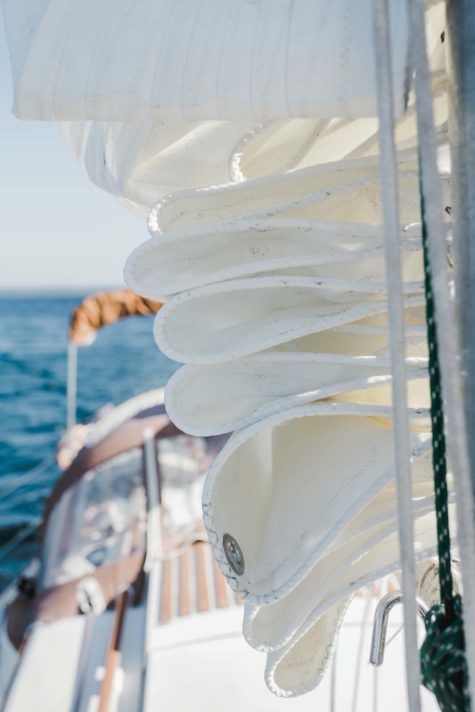 Payson is one of few women in the sail making and repair business.