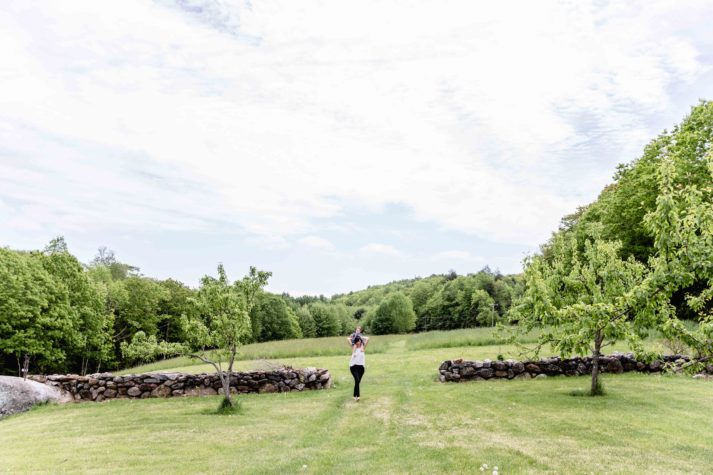 Alissa runs a website called Urban Exodus, where she documents the lives of people who have ditched the city for the country. She’s slowed down since moving to Maine, she says. (And her toddler, Haven, helps her chill out even more.) 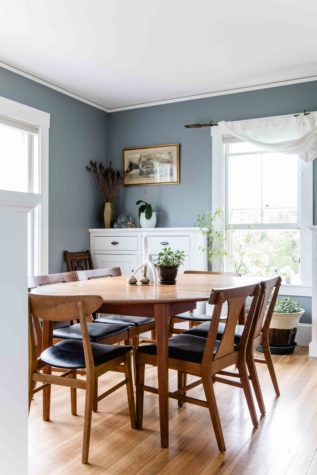 The house had been renovated before the Hesslers moved in, but they did apply a fresh coat of paint. 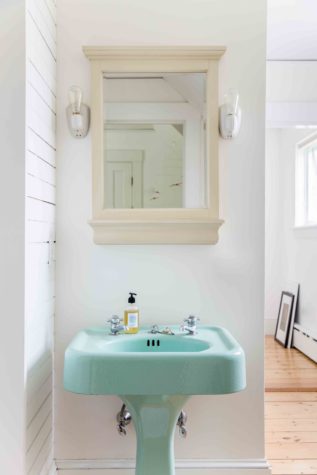 A funky vintage mint-green sink brightens up the bathroom. 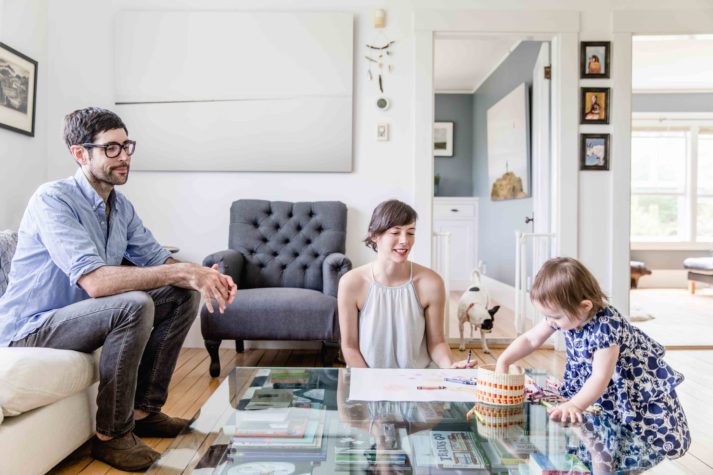 The couple’s style is a merger of Alissa’s crafty impulses and Jacob’s more streamlined aesthetic. 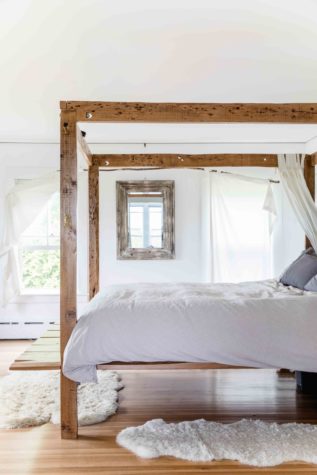 The homeowners’ bedroom is simple and calming, with a big, sturdy four-poster and sheepskin rugs. 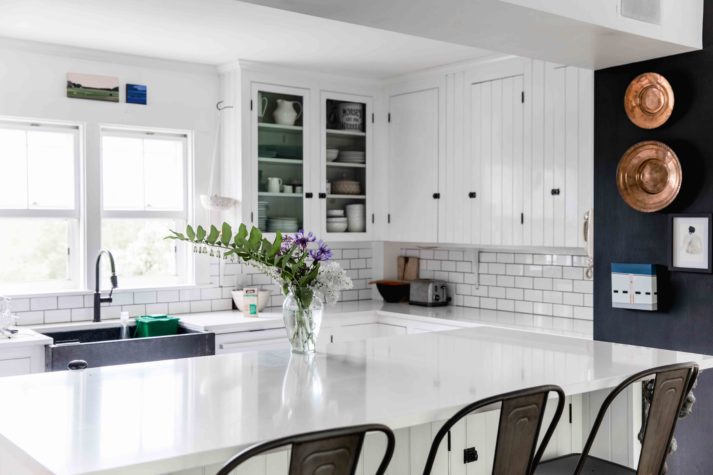 Black chalkboard paint gives Haven a place to play in the kitchen, while white tile keeps it feeling clean and fresh. 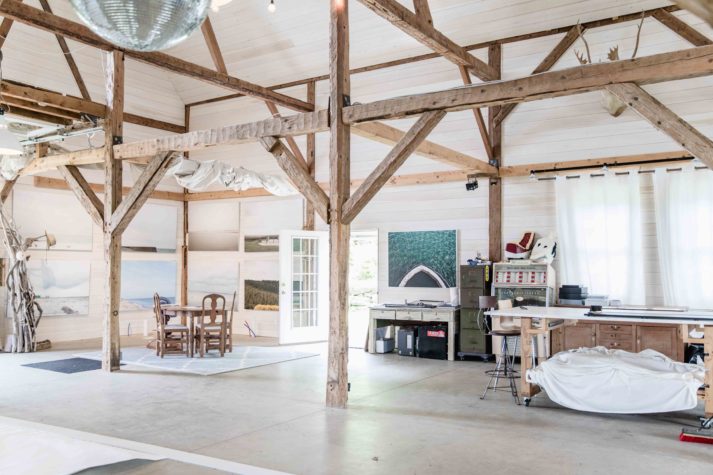 The Hesslers have renovated the old barn on their property to serve as a photography studio and teaching space. 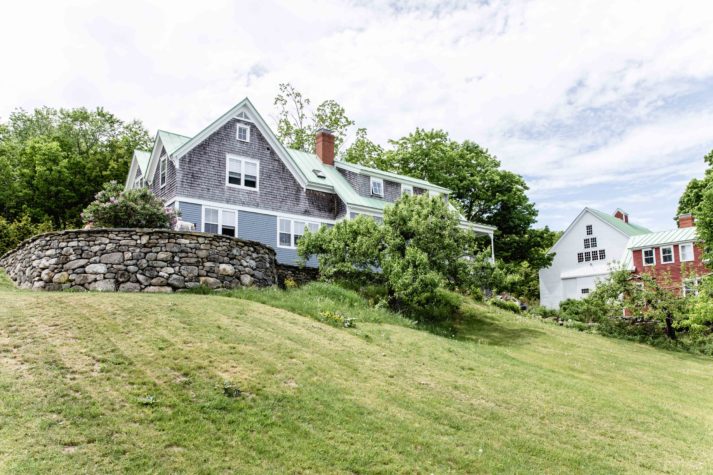 The Howe family owned the large gray farmhouse on Howe Hill Road for over 200 years. With their sprawling gardens and back-to-the-land mentality, Jacob and Alissa are continuing the Howes’ legacy while breathing new life into the graceful structure.

For over 200 years, the large gray farmhouse on Howe Hill Road in Camden was in the Howe family. It dates back to the time when Camden was “divided into ten plots for ten families,” explains Jacob Hessler, one of the current owners of the once-abandoned farmhouse. Jacob’s mother was raised down the road from the Howe property, and he was raised on stories of Walter Howe and his bachelor brother, Oscar. Walter was an old-fashioned Mainer, the kind of man who dowsed for water, wore shirts made from grain bags, and kept a team of oxen for haying. Toward the end of his long and storied life, Walter went into assisted living, and the house fell into disrepair. “I remember it being this disheveled place,” Jacob says. “The walls were caving in.” Even so, the house had beautiful bones under its dilapidated exterior. It had a plain grace that transcends time and conditions, a simple kind of elegance that shows itself in form and lines, like a ruined Greek temple or a crumbled stone bridge.

Fortunately, when Jacob moved in to the house in 2012 (followed months later by his then-girlfriend Alissa Morris [now Hessler], who moved from Seattle), the groundwork for modern living had already been laid. A pair of architects had purchased the home in the 1990s and renovated it. They put in electricity and running water. They fixed the falling-in walls and repaired the roof. “All we really had to do was paint the walls,” Alissa says. “And get some furniture.”

The painting was quick, but the furniture took a good deal longer to collect. (Their first piece was the “dog couch” donated to the couple by Jacob’s grandfather. “It really smelled like dogs,” Alissa says, deadpan.) When they first moved to Camden, the couple hadn’t been dating for long. They both came from cities—Jacob had been living in a “tiny one-bedroom in New York”—and since Alissa was also moving cross-country, she didn’t bring much with her. She was used to traveling light. She had spent the past year working for a cell phone company, traveling from Taipei to Seattle to New York to San Francisco. “When I met her, most of her week was spent in the air,” Jacob says. “But she could get stuff done in a way I had never seen before.”

Moving to the country necessitated a slower pace and an overall lifestyle change. The couple started their own business, Hessler Creative, and Alissa began a journalism project called Urban Exodus, in which she interviewed various artistic types who had left major metropolitan areas for more rural environs. (Alissa has since published a book, Ditch the City and Go Country.) It took a while to build their creative portfolio and client roster. “In the early days of our business, we did some bartering for work,” Jacob reveals. They did design, branding, and websites for small farmers (“We traded design for cheese and yogurt from Copper Tail Farm,” Jacob says), for Pilates instructors (Crane Pilates) acupuncture specialists (Spring Tide Acupuncture), and for local restaurants, including Long Grain in Camden. “Bartering is amazing,” Alissa says. “It allows us to work with people whose businesses we believe in, and everybody feels good about it.” This business practice also helped them become more connected to their local community—something that is vital if you want to thrive in a rural area.

This creative, adaptive attitude also helped the Hesslers create a home that feels warm, inviting, and utterly theirs. There is art everywhere you look in their modernized farmhouse, and it runs the gamut from minimalist landscape photography to folksy crafts, reflecting the diverse tastes of Alissa and Jacob as well as their artistic output. (Jacob is a fine arts photographer and shows at Dowling Walsh Gallery in Rockland, and his dreamy pieces hang around the house.) “I’m much more hand- drawn than Jacob,” Alissa says. “I like things that are vintage and funky.” Jacob chimes in, “I’m more clean, minimalist, and Swiss influenced.”

“That’s the house, in a way,” Alissa explains. “The super clean and cool stuff is all his. All the flowery touches are mine.” “I made these pillows,” she says, as she plumps a hand-printed gray pillow on the couch, “and the weird hangy things,” as she points to a whimsical, mobile-like creation that involves sticks and feathers tied together with colorful yarn. There’s a star on the wall made from branches that Alissa hammered together, and throughout the house are animal heads made from garbage and papier-mâché. Not only does Alissa collect branches and boughs (“There was a point where we were totally drowning in sticks,” she jokes), but she also likes to take plastic that would otherwise end up in landfills and use it to create works of art. “I think there is potential in everything,” she says. “I love creating something that makes people smile out of the things that they would normally just throw out.”

Although Jacob’s style is a bit more streamlined, he also belongs to the church of DIY. Together, they took sticks from Alissa’s hoard and created a freestanding arch. This woodsy creation stretched above their heads as they said their vows, and now it frames the doorway of their barn, now a photography studio and teaching space. The Hesslers like to go antiquing, and their house is filled with items culled from flea markets and junk shops. “We found that kit clock at the Maine Antique Fair,” Jacob says, gesturing toward a big black grandfather-style timepiece that stands in the corner of their living room. It had been constructed from a clock-making kit, but I couldn’t tell. When they found it, Jacob says, “it was so ugly,” so he bought it for a song, took it home, and painted it with the same matte chalkboard paint they used on the kitchen walls. Someday, when their daughter, Haven, is a bit older, she’ll likely spend happy hours scribbling in multicolored chalk on this neutral backdrop.

Their house is in a bit of flux right now (having a baby will do that to you). Their glass coffee table is temporarily framed by pool noodles, placed there to protect the curious toddler from its sharp edges. It’s a clever little life hack, but Alissa says they’ll probably take them off before the photographer arrives. Haven’s influence can be found throughout the house. She’s made the couple more playful, they say. “Having Haven was the final thing that really made me realize that I have to prioritize living above work,” Alissa says as she cups her daughter’s head in her hand. “I think it’s still important to work, and do what you love with your work, but take a break. She’s a built-in break.” She smiles at Haven first, and then her husband. Here, in this simple gray farmhouse, behind walls painted white and black, they’ve found their place in the country. 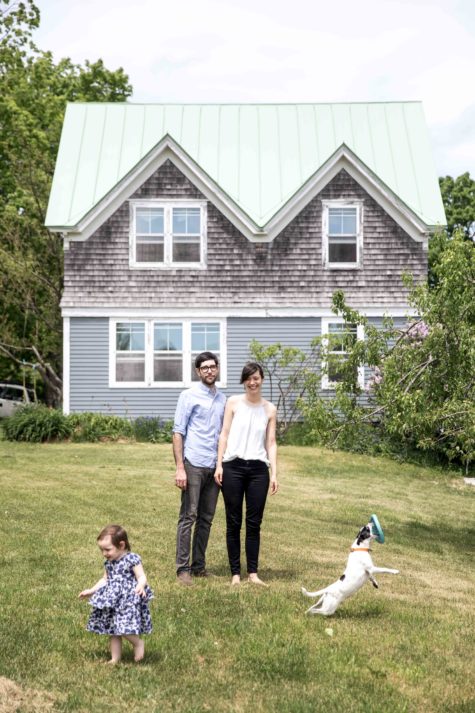 Jacob and Alissa Hessler left their urban lives to live together in the hills outside Camden. They are both photographers, and they work together on their branding business, Hessler Creative. They also teach fine art photography at Maine Media Workshops and College. 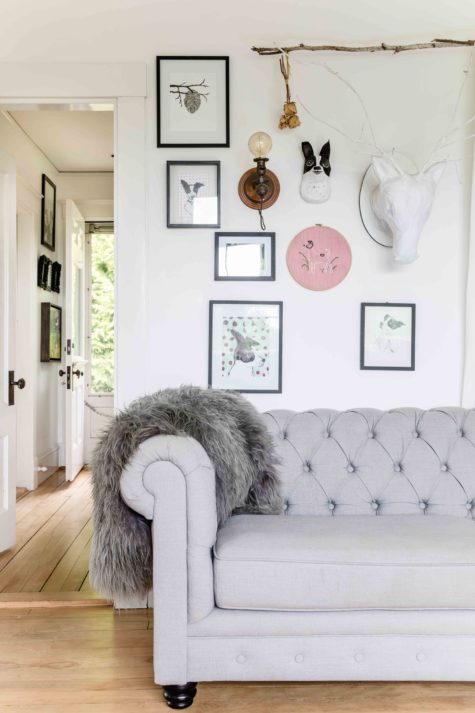 Some of Alissa’s crafts hang on the wall. 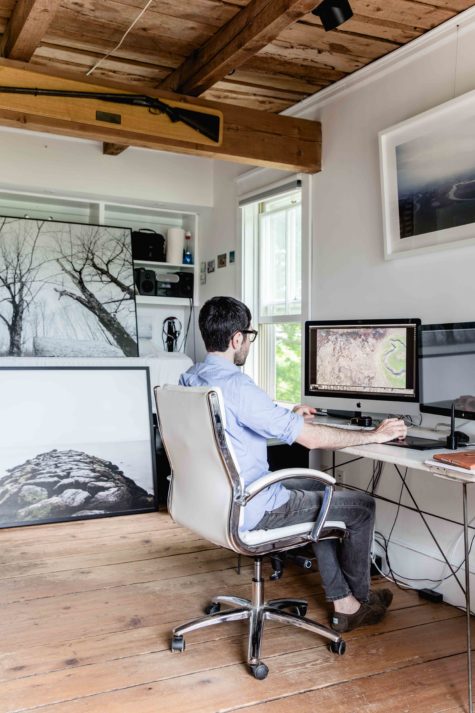 Jacob is a fine art photographer represented by Dowling Walsh Gallery in Rockland.