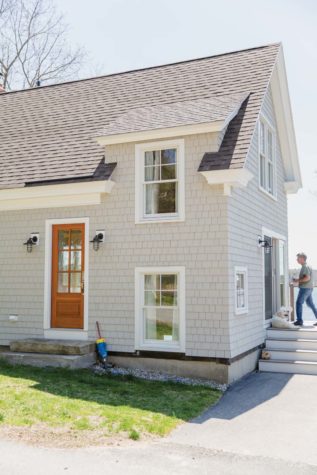 The cottage was designed by Joseph Waltman Architectural Design and built by D. Scott Martin Builders. “They gave it an incredible sense of scale and proportion,” says Dan. “We wanted the house to fit in with the neighborhood, but we also wanted a very clean look. We got both.” 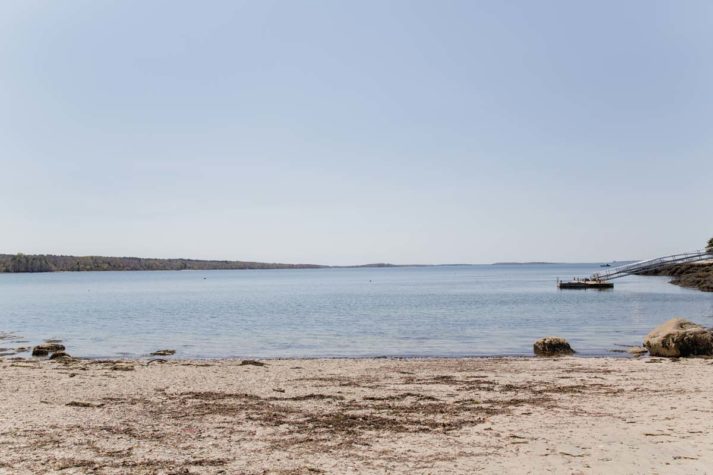 Littlejohn is connected to Cousins Island, which is connected to mainland Yarmouth. It has a removed feel, and yet is a mere 30 minutes away from Portland, which was ideal for the Landrys because when they built the cottage, Dan was a pediatric anesthesiologist and needed to be able to get to Maine Medical Center quickly when he was on call. 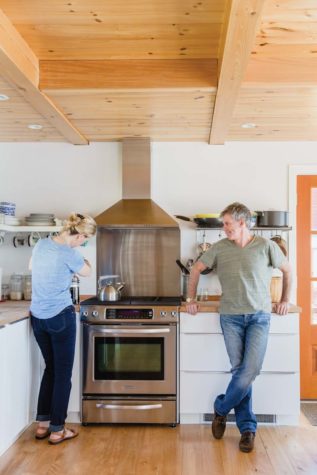 The Landrys spent a winter in the cottage before deciding they wanted to live there year round. “We quickly realized that this was all we really needed,” says Debbie. 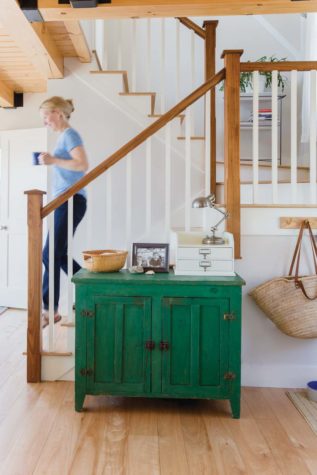 Debbie Landry and her husband, Dan, simplified their lives by moving from their large house in Yarmouth into their much smaller cottage on Littlejohn Island. “We live more thoughtfully now,” says Debbie, who is a research scientist and an artist. 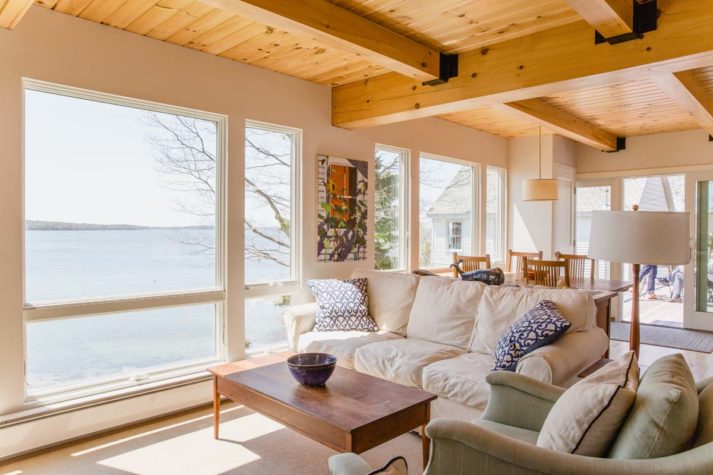 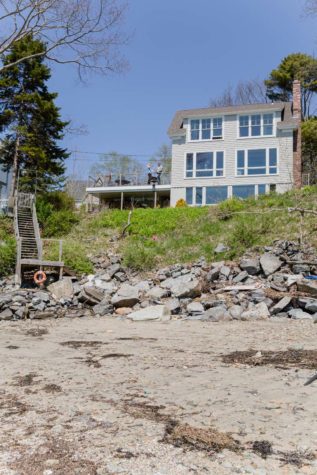 On Littlejohn Island, a longtime Yarmouth couple discovers the upshot of downsizing.

Before a bridge was built between Cousins Island and Littlejohn Island in the late 1880s, people traversed steppingstones to cross between them. Today, less primitive causeways connect the islands to one another and to the mainlands in Yarmouth.

In 2012, Debbie and Dan Landry, who have lived in Yarmouth for more than 20 years, decided to build a small cottage on Littlejohn. Although only three miles from their house, the island-off-an-island location felt appealingly remote and removed. Built by D. Scott Martin Builders and designed by Joseph Waltman Architectural Design, the 1,500-square-foot home was meant to be a summer place, a getaway for the Landrys and their two (now adult) sons, Christopher and Samuel, that was close enough so that Dan, a pediatric anesthesiologist, could quickly get to Maine Medical Center when he was on call.

For the first few years, the waterfront cottage was the Landrys’ summer haven, a best-of-both-worlds scenario. They built bonfires on the beach they shared with neighbors, had lobster cookouts, sold Christopher’s daily lobster catch off their deck, shot fireworks in the Fourth of July sky. If they left something at home, they could hop in the car, retrieve it, and be back at the cottage in the time it takes to boil water. When Dan got a call for work, he could be in the operating room in less than 30 minutes. Over the years, Dan and Debbie gradually extended their stays, until one day they decided to rent out their house on the mainland to a colleague of Dan’s who was renovating her own house. This would be a trial run to see what it was like spending winter in the cottage.

As it turned out, Dan and Debbie’s summer destination was also an ideal year-round home. Extremely well insulated with ample windows, the cottage in winter was cozy and light-filled. During the darkest month of the year, the Landrys could watch the ferry shuttle past, adorned in Christmas lights. What was most surprising about that winter in the cottage, though, was that it made the couple realize just how little space they need to live comfortably. After raising their children in a 5,000-square-foot house, and then seeing what it was like, just the two of them, in a much smaller space, the Landrys were ready to downsize. And they already had exactly what they wanted: a four-season house for this new season of their life. “We quickly realized that this was all we really needed,” says Debbie.

It seems that people, like goldfish, grow to their containers. The bigger the house, the more stuff can fill it. Such was the case for the Landrys, who had accumulated 20 years’ worth of furniture, kitchen wares, books, kids’ artwork, photographs, clothing, and an entire workshop of tools. “We had so many things we didn’t need, didn’t use, and might not even like,” says Dan. While readying the house for sale, Dan fell off the roof and broke both of his ankles, rendering him unable to walk for months. Debbie was faced with singlehandedly packing up the house and deciding what to give away and what to keep. The cottage already had furniture in it and there wasn’t room for much else. The Landrys wound up leaving some furniture for the new homeowners and donating a lot of it. “We found it incredibly liberating to let go of all that,” says Dan.

With its location right on the water, the cottage was built to take advantage of the view. From almost every window, the ocean is visible. The Landrys wanted the space to be open and simple to keep the emphasis on the outside. Constrained by shoreline zoning regulations, it is comfortable but compact. The first floor consists of an open living, dining, and kitchen area, and upstairs is Dan and Debbie’s bedroom and bathroom. The basement is the boys’ domain for when they come home—they each have a bed down there and a shared bathroom. Christopher, who will be attending Maine Maritime Academy in the fall, sleeps facing the water so that he can keep an eye on his boat. (It sank once, a devastating consequence of a scupper blocked by lobster traps.) Debbie and Dan like that when their sons are home, they are never too far. “You actually find your children stay closer in a smaller house,” says Debbie. “In our last house, we were always spread out in various rooms.”

Outfitting the cottage was itself a practice in simplifying. Debbie had always considered herself challenged by decorating. “Back when we were living in the big house, I was a bit scatterbrained. I would see items that I loved—say an Oriental rug and an Arts-and-Crafts-style piece—and just bring them in. Now I know it doesn’t work that way—or at least, that you need to have a lot of design knowledge before you can do that.” For the cottage, Debbie tore out pages upon pages of inspiration from magazines and took note of what they all had in common: lots of hardwoods and clean lines. “Figuring out what I liked and staying on theme really helped calm me down and focus on the feeling that I wanted the cottage to have. So anytime we went looking for faucets, for example, I could refer back to my inspiration file and ask myself, ‘Okay, what would go in that house?’”

These days, the boys are grown. Dan is out of the OR and into administration as president and chairman of the board of Spectrum Medical Group. Debbie, a research scientist, has a PhD in molecular and cellular biology. After years of studying the molecular switch that controls genes in the immune and vascular systems, and in cancer cells, she founded (and is the executive director of) iXplore STEM, a nonprofit that supports science, technology, engineering, and math (STEM) education in K-12 classrooms and enrichment programs in Maine. She’s also an adjunct professor at the Center for Excellence in the Neurosciences at University of New England. In recent years Debbie has found that she’s been able to return to her other passion—painting—which was thwarted long ago by an art teacher in college who told her (upon learning that Debbie was studying biology as well) that there was no room in her class for people who weren’t “serious about art.” Debbie has returned to her oils now, finding places in the cottage to hang her work, and a constant source of inspiration in her surroundings.

Dan and Debbie joke that they have become the poster children for downsizing among their friends and family. “Everyone keeps giving us that book The Life Changing Magic of Tidying Up,” laughs Debbie. “We got so many copies, we had to start giving them away. We certainly don’t need them now.” 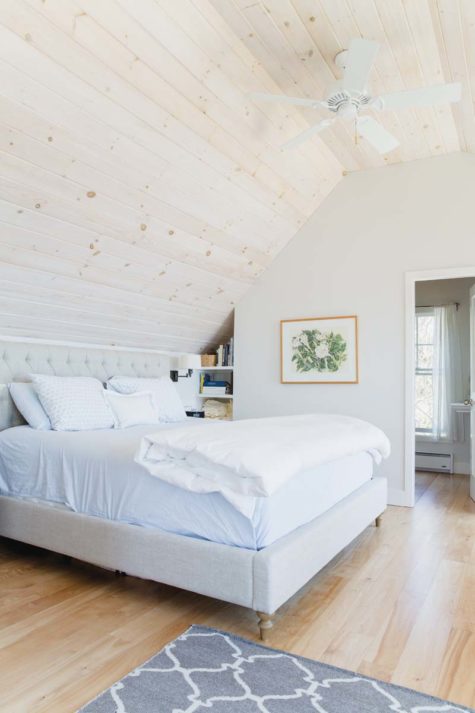 Dan and Debbie’s bedroom suite on the top floor features a whitewashed ceiling and water views from bed. 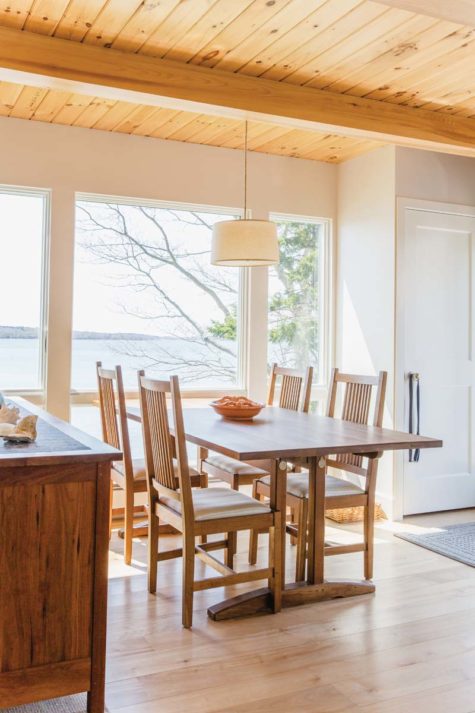 From the windows of the main living space, the Landrys enjoy watching the ever-changing water. “Every morning the kids who are going to school get on the ferry and go to the ferry landing, which you can see from out here on the deck. A school bus is waiting, and then takes them to school. It’s so cute,” says Debbie. And in the winter, the ferry goes by decorated in holiday lights. “You see the lights in the dark out there, and it’s really sweet,” says Dan. 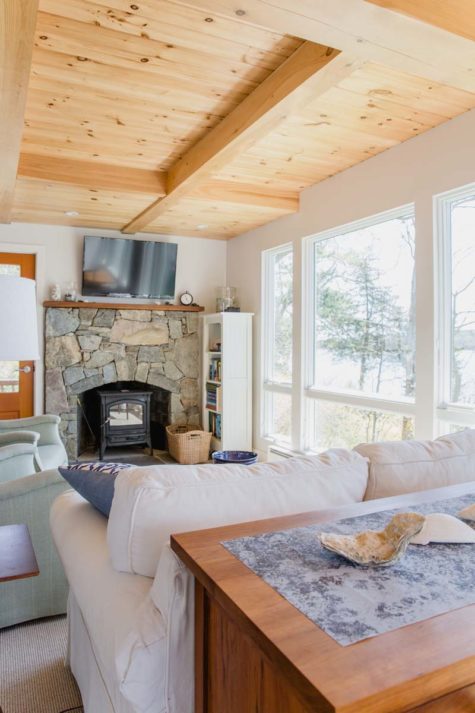