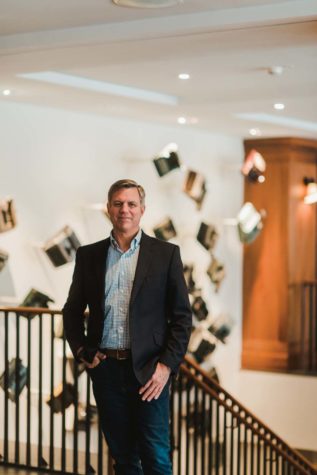 Eight years after winning a silver medal in the 1992 Barcelona Olympic Games for sailing, Jim Brady moved to Maine to work as a real estate developer. As a professional sailor, Brady would not only operate the boat; he would also hire the naval architects and boat builders and choose race venues and the crew. “I found that those project-management skills were transferrable into real estate development,” says Brady, who in 2017 cofounded Fathom Companies, a real estate development company with a focus on historic renovations. Portland’s proximity to the ocean and its historic character are what drew Brady to Maine. “The creativity of our business community and the vibrant cultural life make Portland a great place to live, and I have found a way to contribute to the local community by preserving historic buildings in urban areas.” Four years ago, Brady and his team opened the Press Hotel and Union restaurant in the former Portland Press Herald headquarters. “We took a decaying historical building and brought a level of hospitality to Portland that didn’t exist before,” Brady says. Two blocks from the Press Hotel is another of Brady’s projects: 80 Exchange St., an office building in the Old Port. Brady led the preservation and renovations of the brick structure by adding new finishes and restrooms. A new mural with bright colors and abstract shapes was recently completed on the southeast-facing wall to replace another mural that was removed during the renovations—a piece of public art that Brady says adds vibrancy to Portland’s downtown. In addition to his role at Fathom Companies, Brady is a member of the Portland Regional Chamber of Commerce, is on the board at SailMaine, and is a trustee at Maine Preservation.