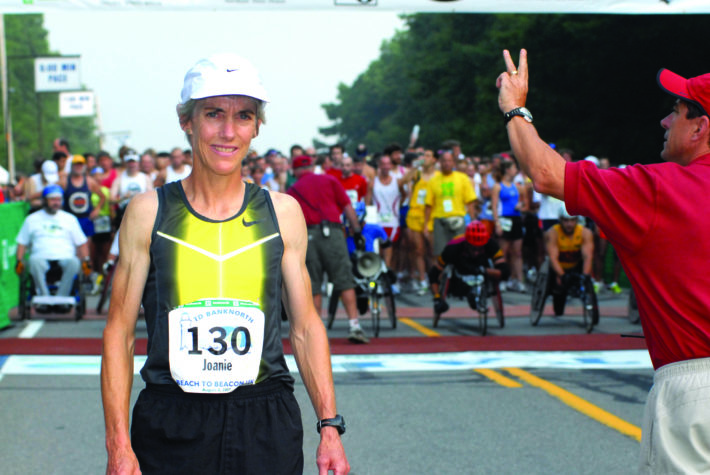 Benoit Samuelson getting ready to run the race in her hometown of Cape Elizabeth. (Photo by Black Cow Photo) 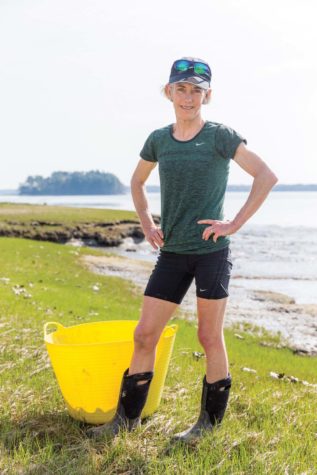 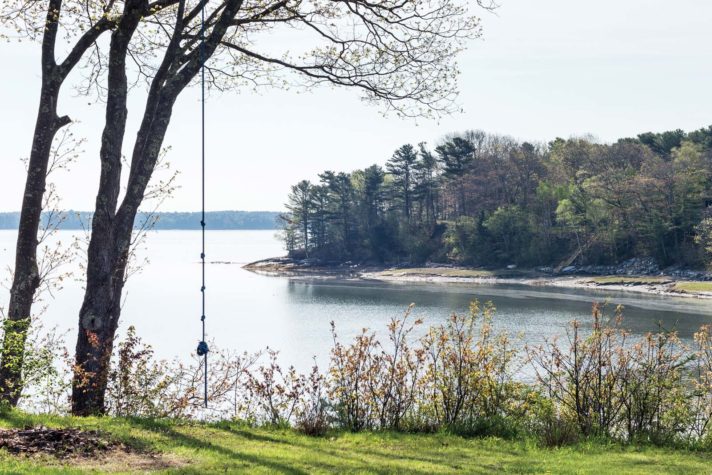 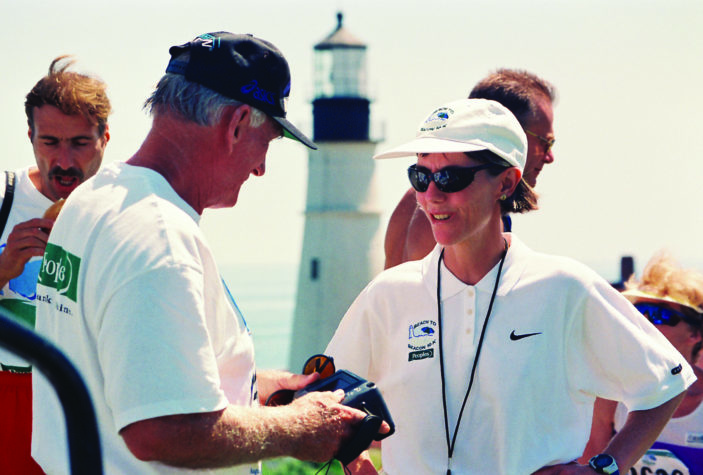 Benoit Samuelson near the finish line of the race in Fort Williams Park. (Photo by Black Cow Photo) 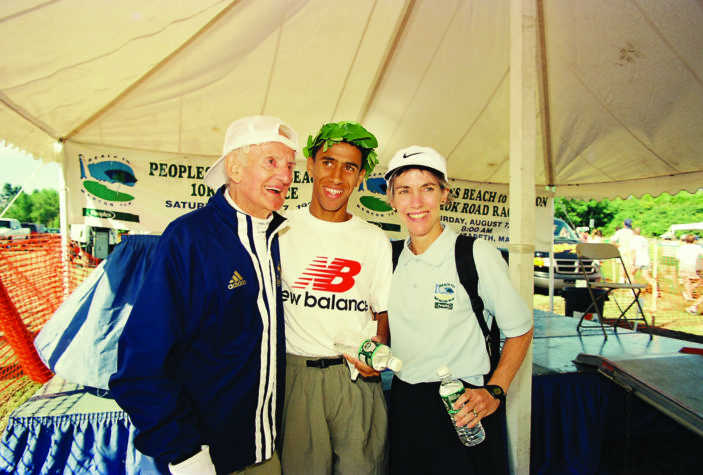 Johnny Kelley, an American long-distance runner who competed in the Summer Olympics (1936 and 1948); Khalid Khannouchi, a former marathon world-record holder; and Benoit Samuelson. 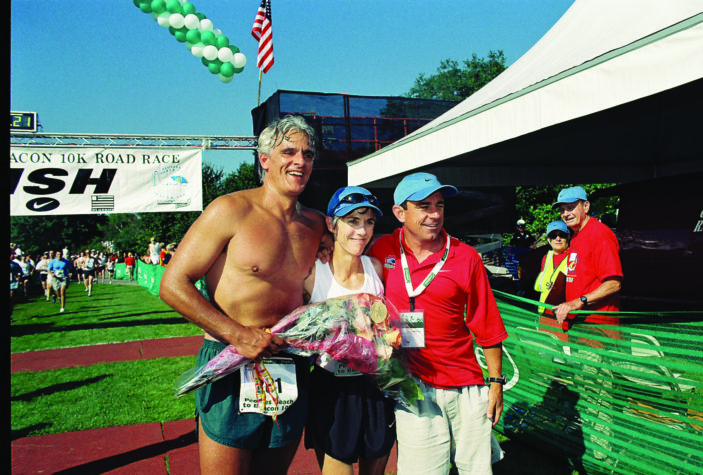 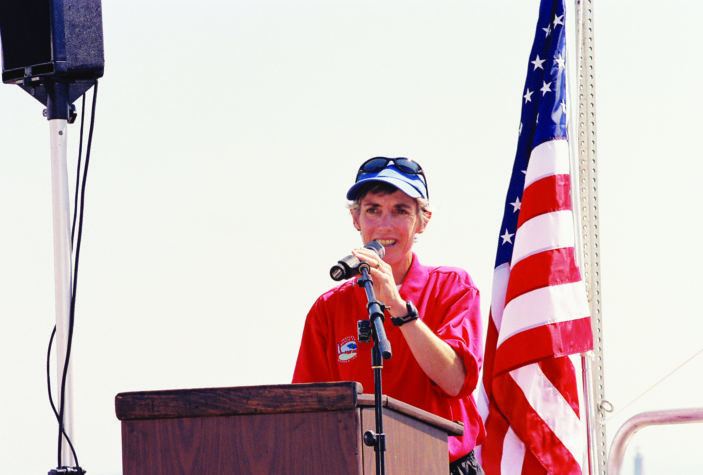 Benoit Samuelson is a tireless advocate for causes that promote environmental and personal health. (Photo by Black Cow Photo) 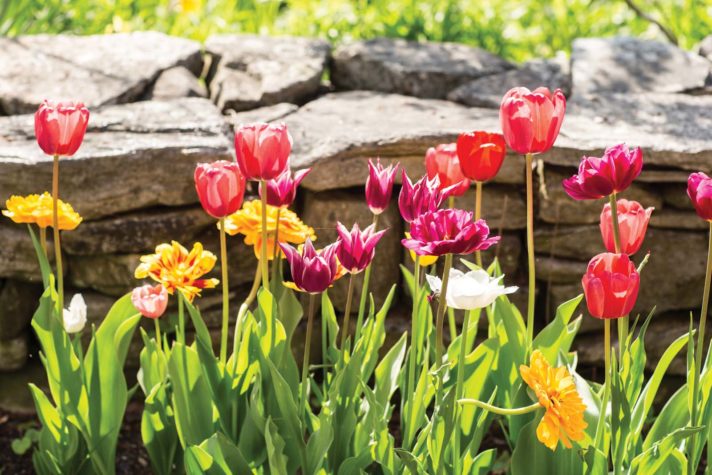 Spring flowers along a stone wall at Benoit Samuelson’s home.

Grasses bend and bow, rippling across the shaggy field. A salt tang seeps through the oceanside pines, and a ribbon of pavement lies ahead, ducking and rising over the hills in Freeport. The Maine roads have been a training ground for 1984 Olympic marathon gold medalist Joan Benoit Samuelson for more than four decades. “I’ve left over 150,000 miles of carbon-free footprints,” says Benoit Samuelson, founder of the TD Beach to Beacon 10K Road Race in Cape Elizabeth, which has hosted more than 6,000 runners each August since 1998. “Maine is a beautiful place,” says Benoit Samuelson. “It’s where I have my roots and it’s where I choose to live my life, so anything I can do to promote personal and environmental health—in any aspect, throughout our state—is something that I’m happy to do.”

A former high school and college field hockey player known as Joanie Benoit, Benoit Samuelson came of age in the early 1970s, a time when women were not encouraged to run. “When I was in high school, it was thought by the so-called experts in the sport that if a woman ran over a mile, she’d do bodily harm and never bear children,” says 60-year-old Benoit Samuelson (who would eventually become a mother herself, twice over). A self-described tomboy with three older brothers, the 5-foot 2-inch Cape Elizabeth native once aspired to be an Olympic skier. After breaking her leg on a slalom course as a sophomore in high school, Benoit Samuelson turned to running as a means of getting back in shape. She initially confined her training to the roads of Fort Williams—back when vehicular traffic wasn’t allowed—where fewer people would see her.

“I would walk from our home to the fort, run to my heart’s content, and then walk home,” says Benoit Samuelson. Sold to the town of Cape Elizabeth in 1964 and converted into a park, Fort Williams was previously a U.S. Army fortification and part of the Portland Harbor defense system. Its craggy coastal trails lead to Maine’s oldest lighthouse, Portland Head Light. One day after completing a run within the confines of the park, Benoit Samuelson saw a woman she knew, Lindsey Poole, running on the road outside the gates. “She was the coxswain for the Princeton eight,” says Benoit Samuelson, smiling as she leans into the conversation. “I said if she can get out there and run, so can I. I never looked back after that time.”

Benoit Samuelson would go on to become a conspicuous presence in the running world. She won the state championship in the mile as a senior and graduated from Cape Elizabeth High School before matriculating at Bowdoin College in Brunswick (a school that had only begun admitting women in 1971). A standout athlete at Bowdoin, Benoit Samuelson also spent three semesters at North Carolina State University in Raleigh, where she earned All-American honors in cross country and track. She returned to Bowdoin to complete her degree in 1979.

A year later, Benoit Samuelson entered the first women’s Olympic marathon trials, just 17 days after having arthroscopic surgery. She had injured her knee during a 20-mile training run that spring. She won the trials and ran in the first women’s Olympic marathon in Los Angeles, California, on August 5. The marathon finished at the Los Angeles Memorial Coliseum.

“When I came into the tunnel in L.A. in 1984, I said, ‘Are you prepared to carry the mantle that will come with the win in the first woman’s Olympic marathon?’” Benoit Samuelson recalls asking herself. She won the gold with a time of 2:24:52, beating 1983 World Champion Grete Waitz of Norway. “I came through into the light of the coliseum,” she says, “and that was really the moment when I thought, ‘Now, how am I going to give back?’”

Benoit Samuelson has succeeded on this front, participating in numerous organizations, from the Bowdoin College Board of Trustees to the leadership committee of Let’s Go!, a statewide childhood obesity prevention program. Long affiliated with the sports company Nike, she has focused much of her energy on wellness, both personal and global. “Perhaps my biggest mission in life is to bring awareness to the fact that conservation is to the environment what prevention is to health,” says Benoit-Samuelson. “The two are inextricably linked.” She serves on the advisory board for the Friends of Casco Bay, and she is especially concerned about issues such as coastal erosion and ocean acidification. “I’m out there every day,” says Benoit Samuelson, who has continued to run, both competitively and for pleasure. “I’m really a human barometer for climate change.”

This theme has been evident in the TD Beach to Beacon 10K, which draws thousands of elite and recreational runners to Maine each summer to participate in her vision. In 2016, the TD Beach to Beacon earned Evergreen Certification from the Oregon-based Council for Responsible Sport for its sustainability efforts in areas such as recycling and composting. “We’re the only road race currently to have that status in the country,” says Benoit Samuelson, who gives much of the credit to the TD Beach to Beacon organizing committee and the consulting group Athletes for a Fit Planet, led by chief green officer Bruce Rayner.

Benoit Samuelson worries not only about the health of Maine’s environment, but also the health of the people who live here. “There are many food deserts in the state, and there are many communities that are lacking sound physical activity programs,” she says. “You’re only as healthy as your least healthy person, and it starts with good education at an early age.” Each year, the TD Beach to Beacon raises money for a children’s organization, beginning with Big Brothers Big Sisters of America in 1998. The race has thus far raised a total of $600,000 for its designated charities. In 2017, proceeds will be directed toward Let’s Go!. “Not only are we helping the children, we’re trying to help the parents realize what their children can be with positive steps and positive nutrition and good physical activity,” says Benoit Samuelson.

The TD Beach to Beacon itself is a manifestation of the joy inherent in physical activity. Crowds of spectators cheer on runners along the course, which begins near Crescent Beach State Park and follows Route 77 to Shore Road before turning into Fort Williams and ending at Portland Head Light. “It’s great to see the elite athletes come across the finish line, all attempting to run a personal best or improve the course record,” says Benoit Samuelson. “But it’s really the runners at the back of the pack who never thought they could cover the distance…achieving something that makes them feel so good. That’s a reward that I never expected.”

There are also positive social and emotional benefits for the race organizers and volunteers. “To say that any one person or any one organization or any one sponsor is solely responsible for the success of this event would be very wrong,” says Benoit Samuelson. “It’s a collective effort. It’s a happy effort…In this day and age, we need something positive to grab onto and run with, literally and figuratively.”

In between race planning, running, and supporting social causes, Benoit Samuelson retreats to her renovated saltwater farmhouse off Flying Point Road in Freeport, where she lives with her husband, Scott Samuelson. Her children, Anders and  Abby, are now grown. She continues to find inspiration in the natural world. “I love to garden,” says Samuelson. “It grounds me. I love to feel the good earth, if you will, and going to the garden is something that really helps to balance and calm me. I’ve been known to go out with a headlamp returning from a trip late at night just to see what’s grown while I’ve been away.”

Since she first started training on the roads around Fort Williams as a teen, Olympian Benoit Samuelson has become a champion for the lands she runs across, the ocean she runs beside, and the people she runs with. “I just want to see a healthy Maine community and people who find passion in whatever it is they choose to do with their lives,” says Benoit Samuelson. “We all have the ability to contribute in one way or another. I think people just have to realize that and find out whatever it is that floats their boat and get in it and start paddling.” 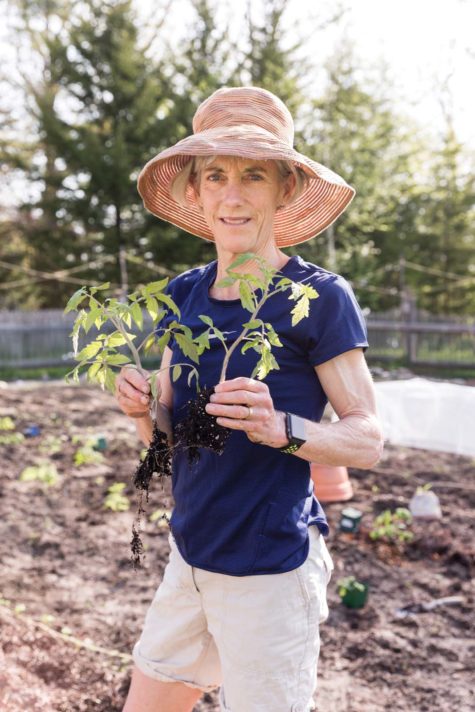 Benoit Samuelson, a proponent of local foods, holds seedlings she is about to plant in her garden. 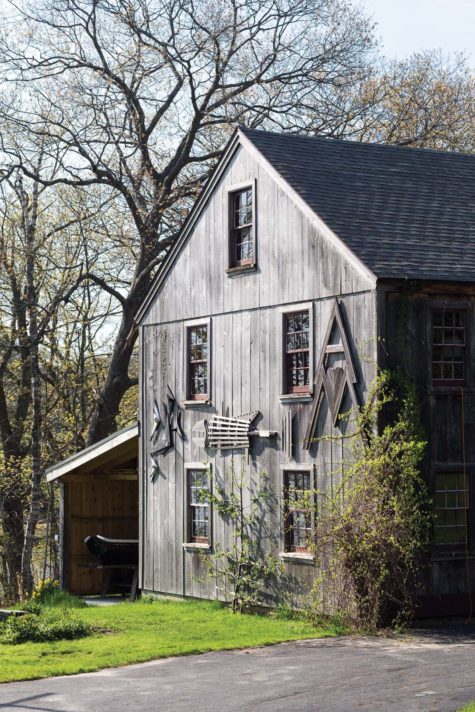 The barn at her Freeport saltwater farm. 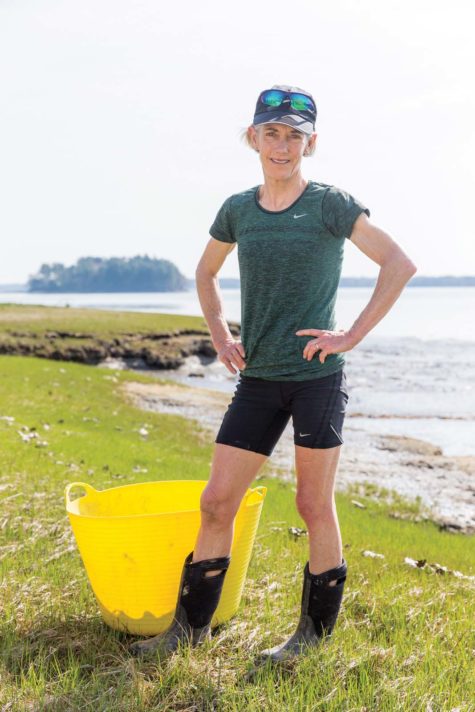