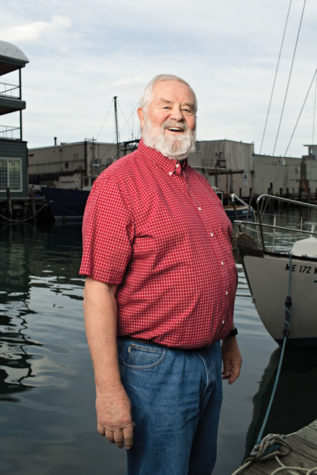 As Casco Baykeeper, Joe Payne made a career out of his greatest passion—the ocean. He spent summers on Peaks Island where he and his siblings collected sea treasures, fished, and swam. “As I became aware of pollution and other threats, I felt I had to do something to improve and protect the bay I cherished,” says Payne. “I knew Casco Bay as aproductive
place that provided food and income for hundreds of people and also as a beautiful place that provided recreation, relaxation, and peace to thousands.” Payne was the first-ever baykeeper for Casco Bay to be appointed; he served for 24 years. During his time, along with the Friends of Casco Bay, he helped close a pulp mill that was polluting the bay. Casco Bay was designated as a “No Discharge Area” so cruise ships couldn’t dump wastewater into the bay. “Another project that captured the public’s interest was moving 35,000 lobsters out of the way of the federal dredge of Portland Harbor,” says Payne. All projects were both environmental and economic successes. “But, the best things we’ve done over the past 25 years are keeping the bay’s health in the public eye and growing an energetic organization that people trust to speak out and fight for the bay’s, thus the community’s, health.”