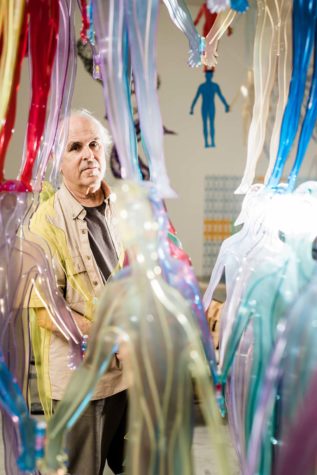 Jonathan Borofsky’s towering public sculptures are located in cities around the world, but it wasn’t until 2016 that the Ogunquit artist had an exhibition in Maine. A solo show of Borofsky’s work marked the openings of Rockland’s Center for Maine Contemporary Art, where a 24-foot-tall sculpture from his Human Structures series is installed in the courtyard. The structure of 12 colorful steel figures, bolted together and stacked on top of each other, signify a common theme in his work: humanity uniting together. “The title kind of seeps out of it—Human Structure— that seems to be what we’re all doing. We’re all connecting to each other. We’re all building our world,” he says. The unveiling last year of similar sculpture by Borofsky marked the opening of a new sculpture garden at the Portland Muse- um of Art, and in 2008 he created a 64-foot-tall sculpture of his inter- connected, colorful figures for the Beijing Olympics. As a child, Borofsky had visited Ogunquit in the summer with his parents, and his first painting lesson was in Ogunquit. After college and graduate school, Borofsky lived, taught, and worked in New York City and Los Angeles for more 20 years before moving to Ogunquit in 1990 to “get away from a lot of activity and kind of hide out.” His work at his Ogunquit studio has been largely focused on sculptures for public locations around the globe. “For me, art has always been my way of understanding my world and the world around me,” Borofsky says.