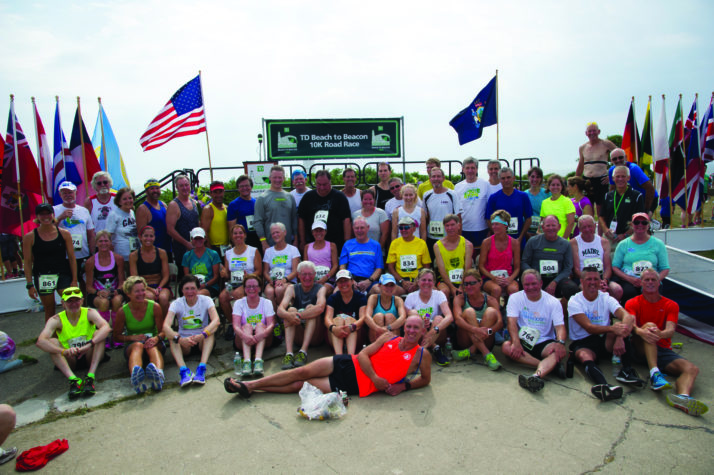 Every year the legacy runners gather after the race for a celebratory photo. They deconstruct their races, watch the awards ceremony, and make plans for next year’s race. Photo by Ann Kaplan 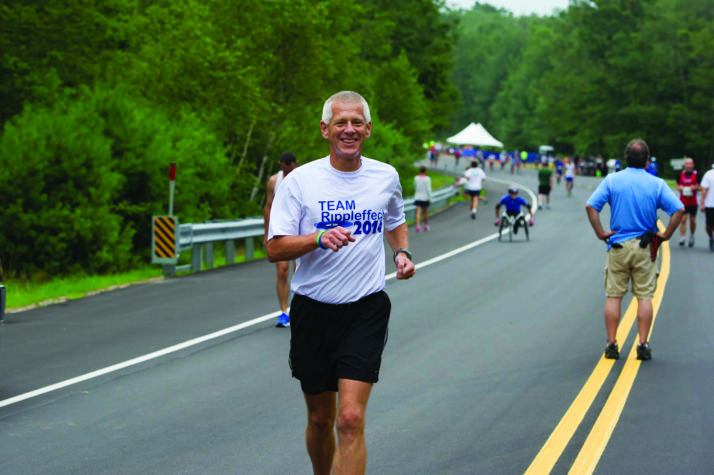 TD Bank state president and legacy runner Larry Wold is dedicated to the mission of the TD Beach to Beacon. He has helped support race founder Joan Benoit Samuelson in keeping the race’s motto front and center: “Shining the Light on Kids.” (Photo by Ann Kaplan) 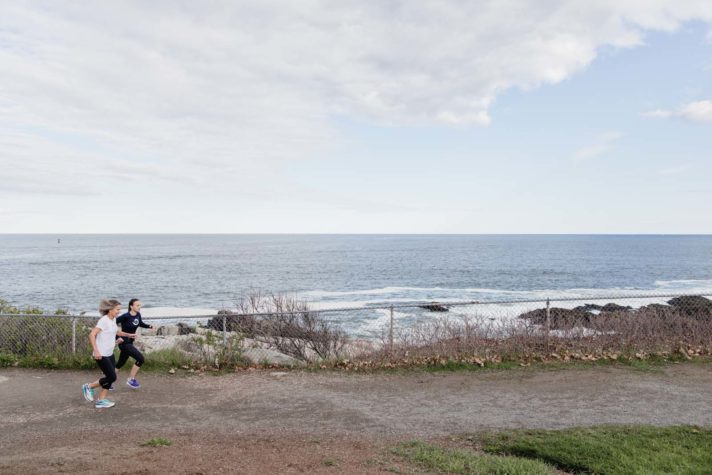 Marji Adams and her daughter, Morgan Lake Adams, get pumped for race day by training on the paths at Fort Williams Park. 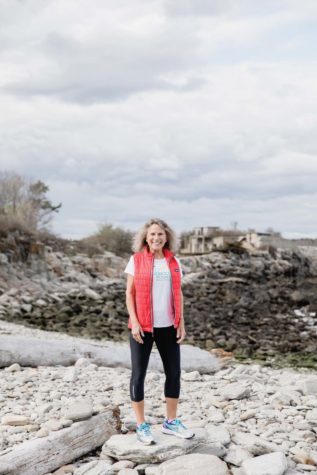 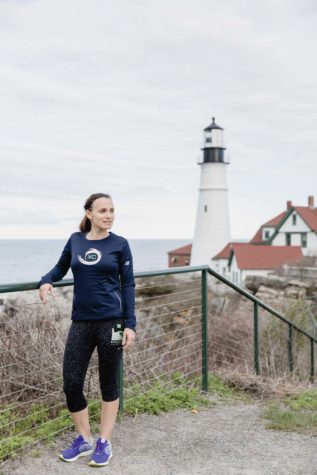 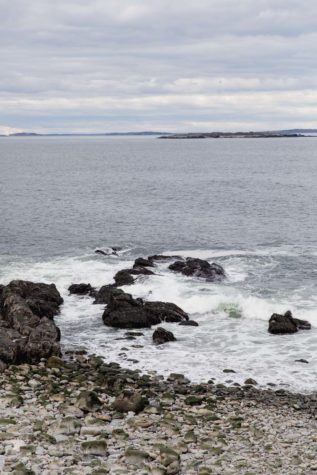 Finishing a 10K race is an accomplishment. Finishing the same 10K race 20 years in a row is a legacy.

They have run every single TD Beach to Beacon since its inception in 1998 and will gather again this year. Their legacy is one of dedication, resourcefulness, and perseverance.

The Streakers range in age from 31 to 80. They are teachers, business professionals, doctors, dance instructors, real estate agents, teachers, and retirees. Some are lightning fast; others walk the entire course. But they are united in their commitment to keeping their streak alive.

Larry Wold | An early and stalwart supporter
Though it’s not evident from his current physique, Larry Wold, state president of TD Bank, started running to lose weight. At 210 pounds, the high school football player thought he might get fitter if he got thinner, so he hit the road. That teenage decision has turned into the passion of a lifetime. Wold’s commitment to the race, like that of TD Bank, has been unwavering from the first year. He and race founder Joan Benoit Samuelson shared a vision of what the race could be, and together they set about shaping it from day one. Wold has been instrumental in sustaining TD Bank’s title sponsorship and commitment to the race.

Both Benoit Samuelson and Wold are passionate about one of the key components of the race: each year race organizers choose a Maine-based youth organization as the official race beneficiary. In addition to a $30,000 donation from TD Bank through the TD Charitable Foundation, the beneficiary also receives extensive publicity, with opportunities to spotlight the work done by the organization. This year’s recipient is Let’s Go!, a nationally recognized childhood obesity prevention program at the Barbara Bush Children’s Hospital at Maine Medical Center that promotes physical activity and healthy
eating.

“It has been a wonderful opportunity for the bank,” says Wold. “It allows us to meet our corporate responsibilities in many ways through just one event: the race promotes environmental stewardship, embraces diversity, and encourages healthy activities in the communities we live and work in. Both the race and the bank started as much smaller entities and we have grown up together. We’ve proved that we can compete on a world-class level in both the banking community and the racing community.”

In addition to committing the bank’s resources to the race—the TD team is instrumental in planning, marketing, and supporting all aspects of the event—Wold leads by example. He encourages fellow employees to enter into the race’s IDEXX Business to Business Challenge team, which has more than 50 TD employees A 20-year streak is an inspiring achievement indeed, but Wold has an even longer streak in the books. He has run the Bridgton 4 on the Fourth four-mile race for the past 29 consecutive years. At age 57, Wold’s healthy lifestyle helps him maintain his level of fitness. With any luck, he’ll be running with the Streakers the 40th anniversary rolls around.

Marji Adams | Running through thick and thin
Marji Adams has been a F.O.J.—Friend of Joanie—for more than 30 years. They met shortly before Benoit Samuelson became the first woman to win a gold medal in the inaugural women’s Olympic marathon in 1984. They have been friends ever since, often traveling together to races around the country, along with sharing gardening tips and recipes.

Adams was one of the first people Benoit Samuelson tapped to help organize the race. Adams helped launch the pre-race Expo held each year at Cape Elizabeth High School during the two days prior to the race. In addition to picking up their race packets and bib numbers at the Expo, runners come for the festival atmosphere the vendors and attendees create at this mash-up of retail extravaganza, pre-race party, and running reunion. Under Adams’s guidance and with the help of fellow legacy runner and friend Jen DeSena, the Expo has expanded from a handful of vendors to an event where retail space sells out months before the race.

Keeping her TD Beach to Beacon streak alive has usually been more a pleasure than a challenge for Adams, who has completed hundreds of road races, including 15 marathons. She loves training with friends and family—her daughter, Morgan, is also a legacy runner—and never tires of the course’s natural beauty. However, seven years into her legacy status, Adams encountered an expected challenge when she was diagnosed with breast cancer. The 2005 race fell in the middle of her course of chemotherapy.

“I thought I might not be able to run,” she says, “but Morgan and Jen convinced me
I should try. They ran with me through the entire race, one on either side. The motivation to maintain the streak was definitely a factor and is probably why I still show up at the start line every year.” But her most treasured memories are of the years she ran with her daughter, “before I slowed to a crawl and she ran faster and faster.” Adams and DeSena now run together every year. They plan to keep their streak—and friendship—alive for years to come.

Morgan Adams | Following her mother’s footsteps
Morgan Lake Adams has been inspired by women who run for as long as she can remember. As a toddler, she watched her mother and her mother’s friends lace up their running shoes and head out the door for their workouts. It didn’t matter to Adams that one of her mom’s friends was arguably the best-known female distance runner in the world; she just wanted to join in the fun. And that’s exactly what she did. Adams started running almost as soon as she could walk and has been running ever since.

She was 16 years old when she ran her first TD Beach to Beacon. There was never any doubt in her mind that she would continue her streak. She ran it through her teens and into her 20s—she even ran it while pregnant, twice. There were times she ran for speed and other times she ran for the sheer joy of being able to participate.

“Every race was special and memorable for a different reason. The Beach to Beacon is so much fun. I’ve been doing it for over half my life and all of my adulthood,” she says. “I don’t think I’ve ever considered not doing it.”

In addition to her status as a legacy runner, Adams is organizing the second running of the High School Mile, which takes place at Fort Williams on the day before the 10K. This race showcases the talents of the most successful high school milers from around the state.

Adams has made running a part of her career as well as her fitness regimen. For
the past six seasons, she has coached the cross-country team at the Maine Coast
Waldorf School, where both the boys’ and girls’ teams have made it to regional and state championships. She’s also raising the next generation of runners in her own family. Her three young children, Tadhg, 7, Saoirse, 5, and Ruairí, 15 months, are enthusiastic participants, as well as spectators.

An instructor, a senor, and a surgeon
Patty Medina, a fitness and dance instructor, trains a group of runners each year to complete the race. “This event is not just a 10K; it’s life-changing,” she says. “It’s both supportive and inclusive, welcoming all ages, shapes, abilities, and challenges. I consider it a blessing for all who participate—runners, volunteers, and spectators.” Medina was 40 when she ran the first TD Beach to Beacon. She plans to celebrate her 60th birthday with her training group at the end of this year’s race.

A legal assistant and well-known fixture on the Maine running scene, Polly Kenniston is the legacy runners’ most senior member, having run the inaugural race at the age of 60. “Coming up over the last hill to the cheering of a myriad of supporters brings tears to my eyes every time,” she tells me. “This is my first Beach to Beacon as an 80 year old, and I intend to do it proudly and as well as possible.”

Dr. Jeff Berman, an ophthalmologist at the Maine Eye Center in Portland, is another legacy runner with tales to tell. He and his wife, Kerri, have hosted invited athletes in their home since 2005. Their most memorable year may have been 2009, when the Bermans hosted elite racer Dejene Berhanu of Ethiopia. Three days after the race, Berman performed surgery on Berhanu to correct ptosis, an eye condition that causes a droopy eyelid. Berman and his team donated their services for the successful procedure. Kerri chalks up this TD Beach to Beacon connection to fate placing the runner with the perfect host family.

Each legacy runner has a unique perspective on the race and 20 years of history to draw on. In spite of that, there is a bittersweet quality to their accomplishments; their cohort gets smaller every year. But they all see each race as an adventure to look forward to, every single year. They wouldn’t miss it for the world. 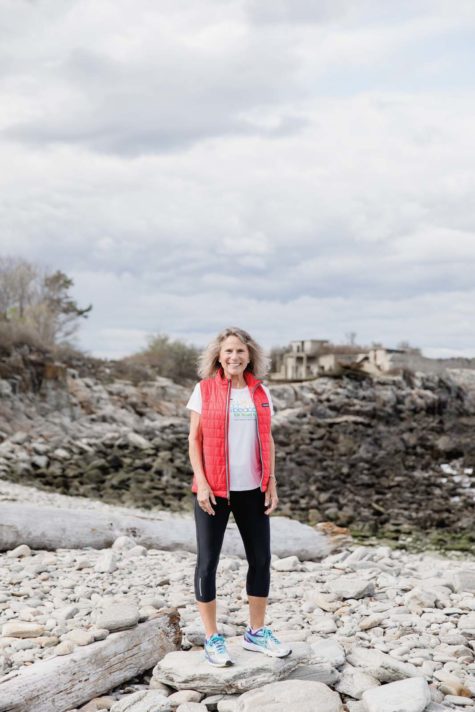 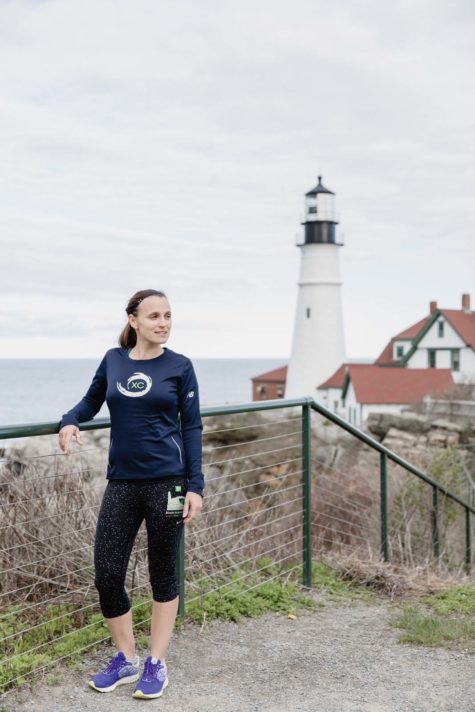 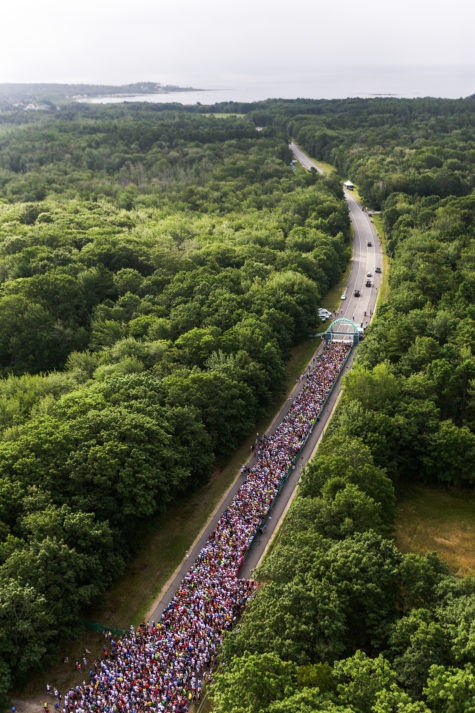 Runners gathering at the starting line of the TD Beach to Beacon. (Photo by Kevin Morris) 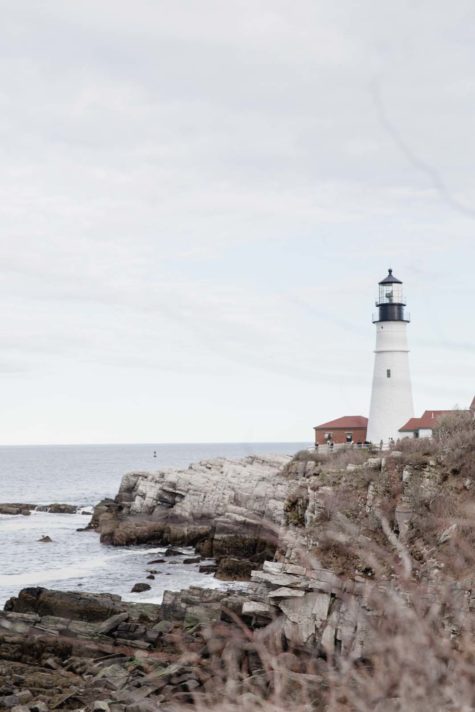