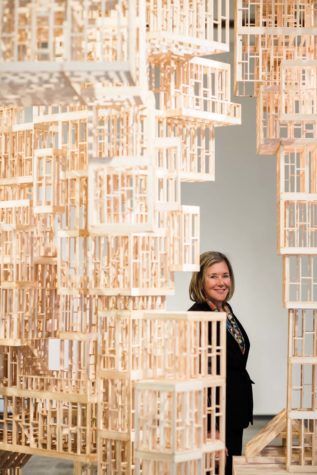 President of Maine College of Art

Laura Freid says what drew her to Maine College of Art (MECA) was the opportunity to work with artists and creative entrepreneurs and to give students “everything they need to achieve the most success in life.” Freid, who became the eighteenth president of the 136-year-old institution in 2017, spent the previous decade as executive director and CEO of Silkroad, a nonprofit arts organization founded by Yo-Yo Ma based at Harvard University. She also served as executive vice president of Brown University and publisher of Harvard Magazine. Freid said she feels fortunate to be leading the college at a time when Portland is “just realizing its true potential.” Design is also becoming more and more integral to everyday life. “I think de- sign is everything. We’re living in a world that’s becoming increasingly visual. Everything we do, even conversations we’re having, is based on how we see things,” Freid says. “Whether we’re using an app or texting on our phone or using Bitmoji, everything we’re surrounded with has been touched by an artist or designer.” Freid says about half of MECA’s graduates start their own businesses in Maine or bring their creative skills to local employers. “Whether students are at MECA for four years in the bachelor of fine arts program or for four weeks in a continuing studies class,” she says, “MECA prepares our students to be part of the new innovation economy in Maine.”