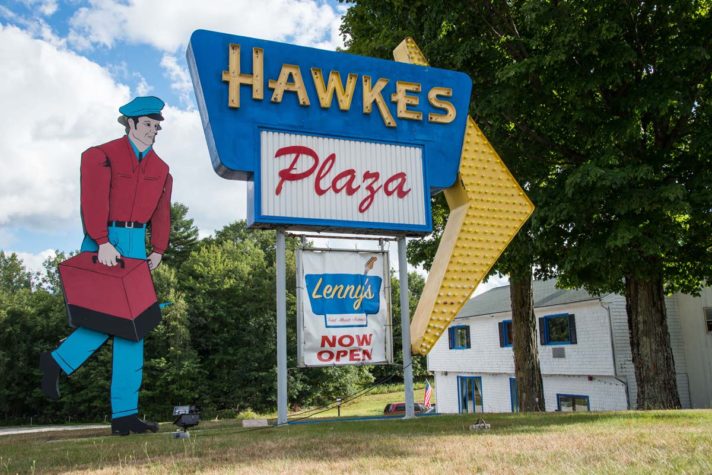 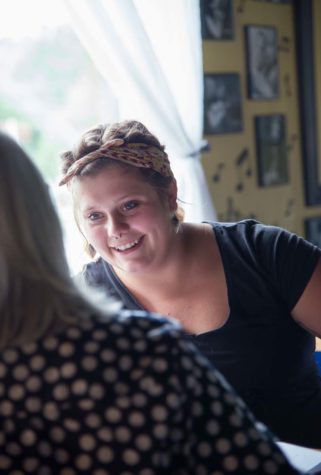 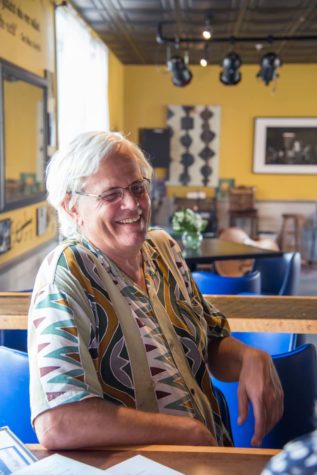 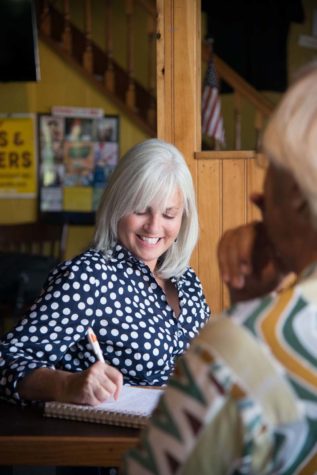 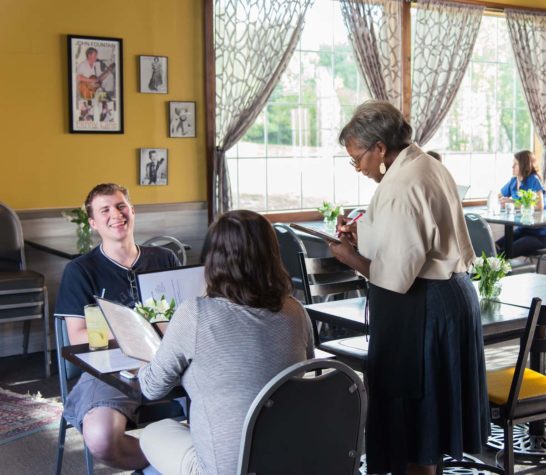 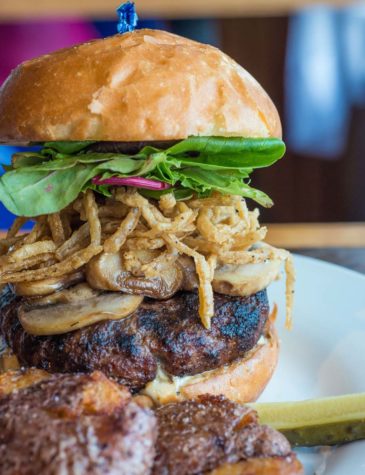 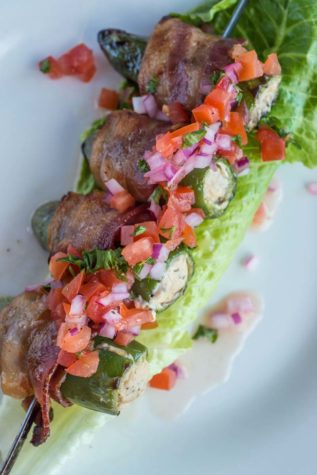 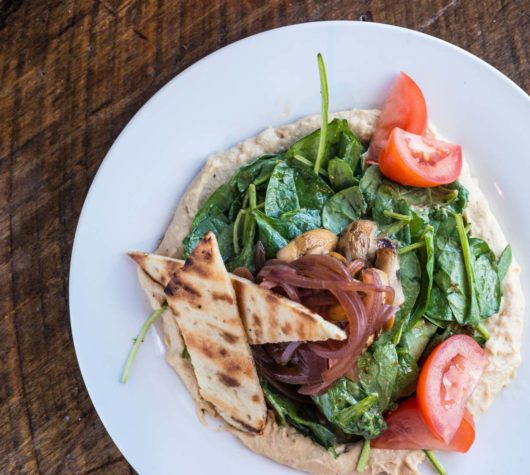 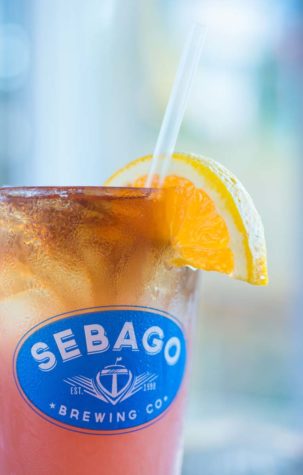 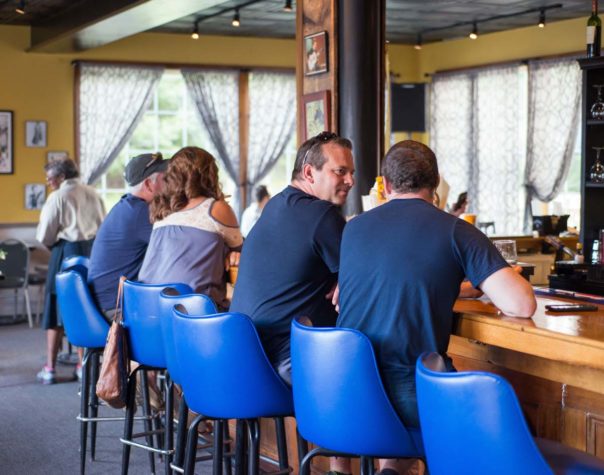 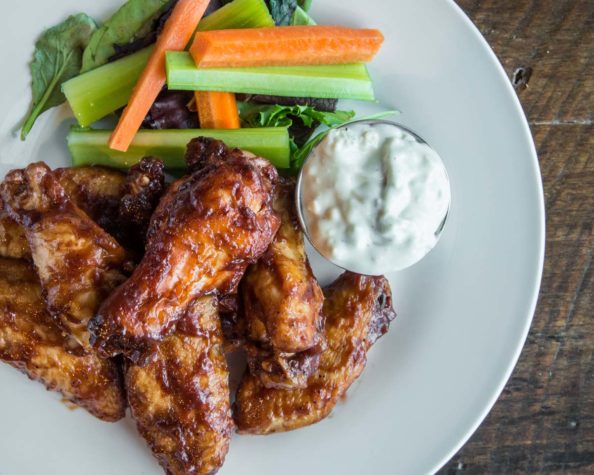 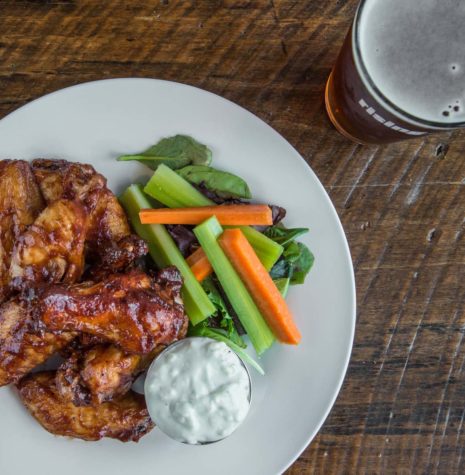 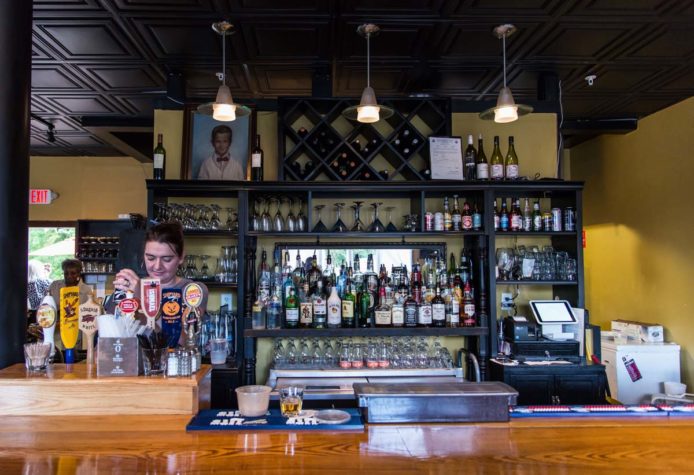 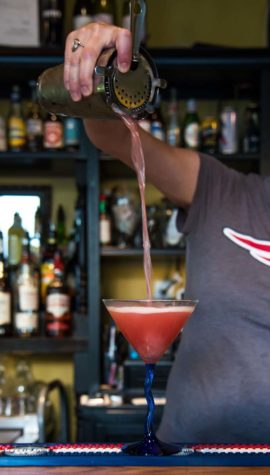 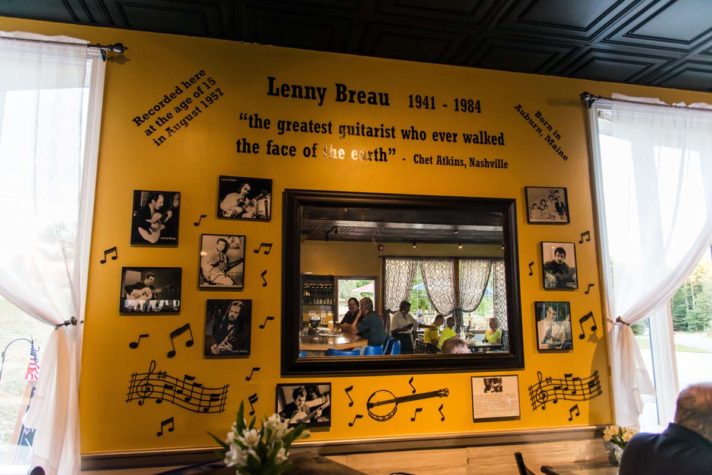 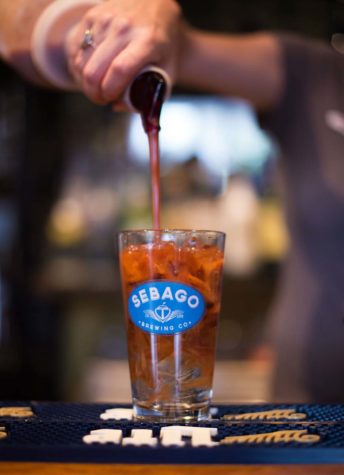 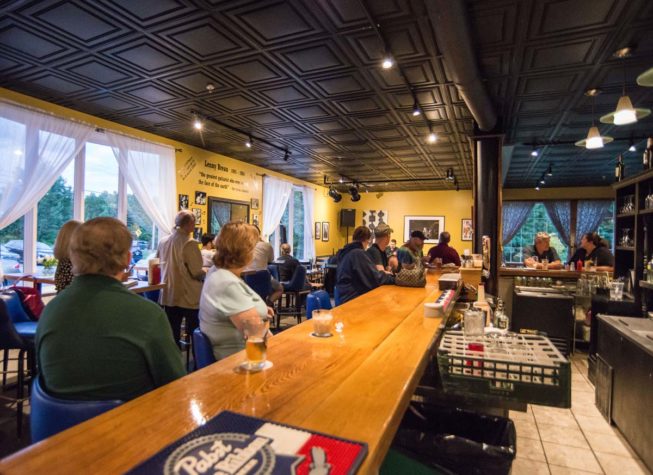 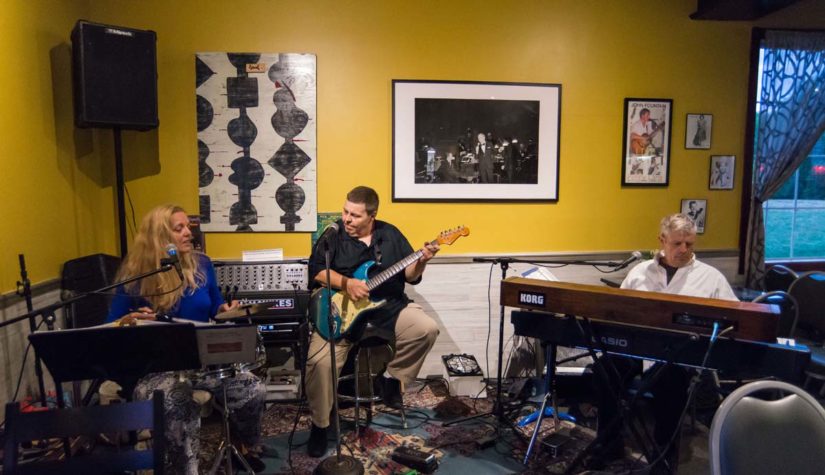 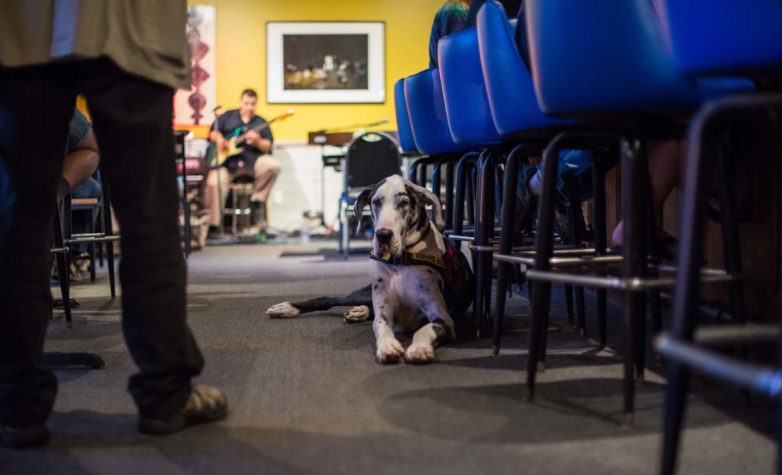 Every summer weekend, for many years, my family and I drove Route 302 on the way to our camp in the Lakes Region. When the kids spotted the 20-foot-tall repairman swinging his toolbox, we knew we were getting close. He was an icon for us, and for many others, marking the spot where Maine musician Al Hawkes ran a television repair shop and recording studio in Westbrook. The studio became somewhat legendary, when in the early 1950s, a teenaged guitar player from Lewiston named Lenny Breau, recorded there. While Breau went on to gain a certain amount of fame as an influential guitar player, the repairman continued to walk in place, swinging his arm and lighting up a corner of Westbrook.

The building housed several businesses through the years. When Bill Umbel purchased it about 12 years ago, he didn’t quite have a plan for it. Umbel had previously owned Empire Dine and Dance in Portland, which was “more about rock n’ roll and whiskey and not known for food.” By 2013 he was ready to move on. “I had to get out of the city,” he says, “and I had this idea waiting in the wings.” Umbel developed a business plan for a spot that would appeal to locals in search of good food, good beer, and live music. “You can never go wrong with beer,” he tells me, “and I knew I would need good food to survive in this business.” During renovations, Umbel stripped the building down to its shell. It now has a roadhouse feel, decorated almost like a family room, with vintage photos and wooden tables repurposed from Empire. There’s a small patio in the back for enjoying drinks outdoors in good weather. Bright blue Naugahyde stools line the bar, and it’s clearly the place to be as late afternoon rolls into early evening on a recent Friday.

Alicia Vandewater-Funkhouser is behind the bar, wearing a New England Patriots t-shirt and chatting up customers. She seems to know nearly everyone, as she pours Maine beers from the tap. She also mixes some excellent cocktails, with names that pay homage to the site’s history. The Guitar Pick features Ice Pik vodka with house-made ginger syrup, fresh lime, and soda. The Lone Pine Senior, with vodka and blue Curaçao, is named after Lenny Breau’s father and his band. Kori Reece is in the kitchen, ably taking over the head chef position just two months ago. She revamped the menu, with high-end pub food—the “kind that makes everyone happy,” she says. Everything is made in-house, and her talent is evident everywhere, from the selection of wings to the daily flatbread special. A plate of jalapeno poppers wrapped in bacon is grilled rather than deep-fried, allowing the taste of the spicy pepper to come through. The bacon is crispy and there’s a fresh salsa on top, the kind of food that cries out for a beer. The restaurant offers a variety of burgers, made from local meat. The beef on Lenny’s Black and Blue burger was flavorful, having steeped in a black pepper soy marinade. A nest of crispy fried onions and sautéed mushrooms sit on top, with a chunky, mild blue cheese dressing. A sweet potato salmon burger is also available, as is a grilled chicken sandwich with house-made blueberry barbecue sauce. Don’t miss Reece’s irresistible, crispy smashed potatoes, served alongside any of the burgers.

As we enjoy the food, tonight’s musical act begins to set up in the corner. Local and regional musicians, usually acoustic, bluegrass, and country, play at Lenny’s three-to-four nights each week. The bar has filled up as the trio tries out a few chords. All eyes turn to the door when customers Steve and Michelle walk in with Steve’s service dog, a Great Dane named Charlie. They’re regulars at Lenny’s, and Charlie has been adopted as the mascot. Everyone stops to greet them and give the dog a pat. It’s a very relaxed atmosphere, with the vibe of a friendly neighborhood bar. “We’re a different kind of restaurant,” says Umbel, as the towering handyman outside now swings his arm to the beat. 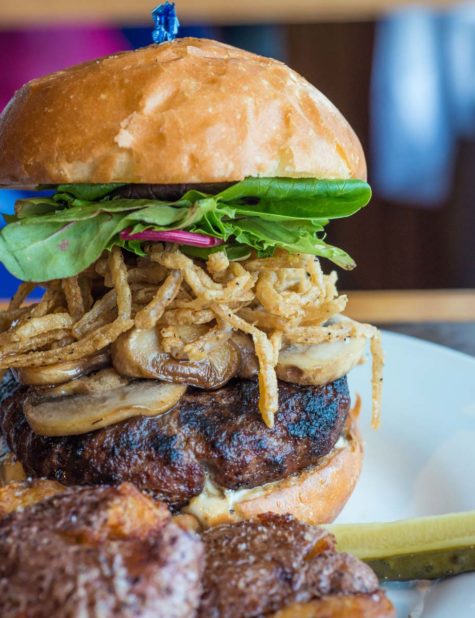 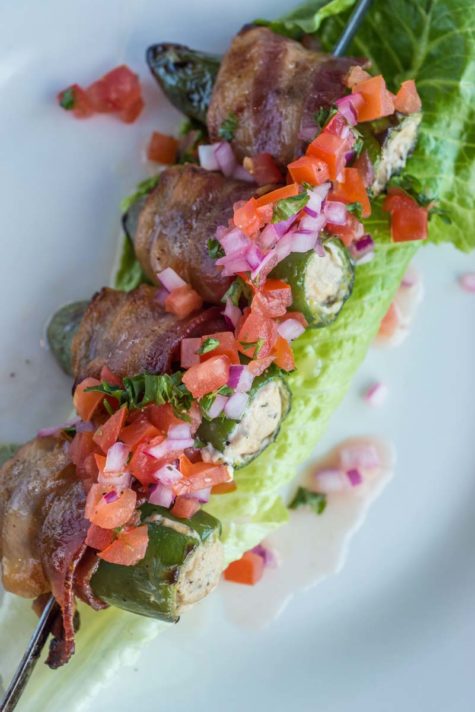