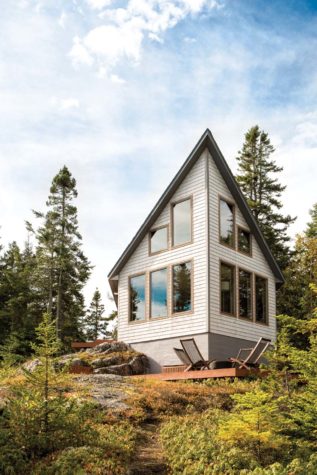 Richard and Julie Rose’s home in Machiasport was built by the late Phil Rose to look like the prow of a ship. 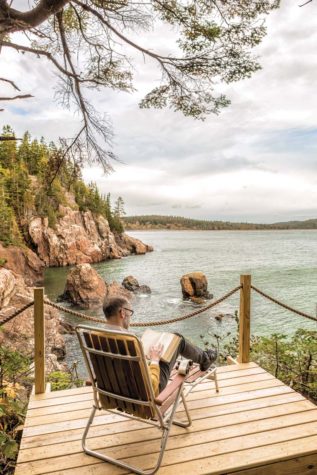 Richard blazed trails throughout the property, including one that leads to a platform overlooking the water that he calls “Phil’s Rest” in honor of his father. 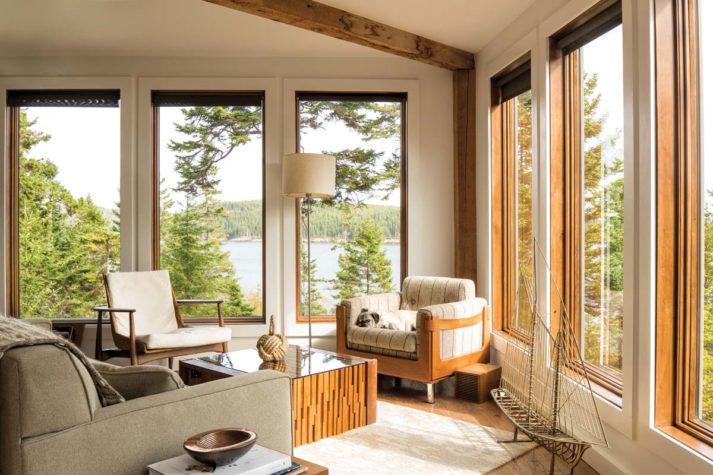 Julie and Richard invoked their love of Scandinavian and midcentury modern design. Vintage furnishings in teak and brass—the materials of boatbuilding—fill every room. 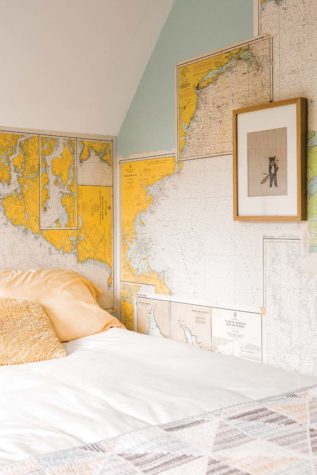 The walls of one of the two bedrooms are covered with blue and gold nautical maps of New England. 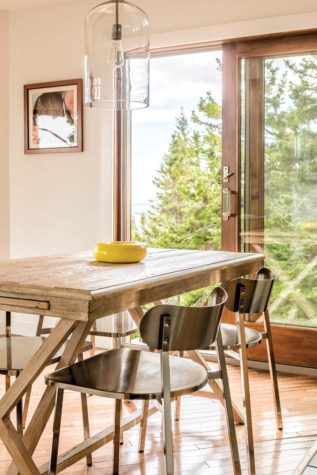 Julie, a lighting designer, outfitted all the fixtures in the house, including this one over the dining table. 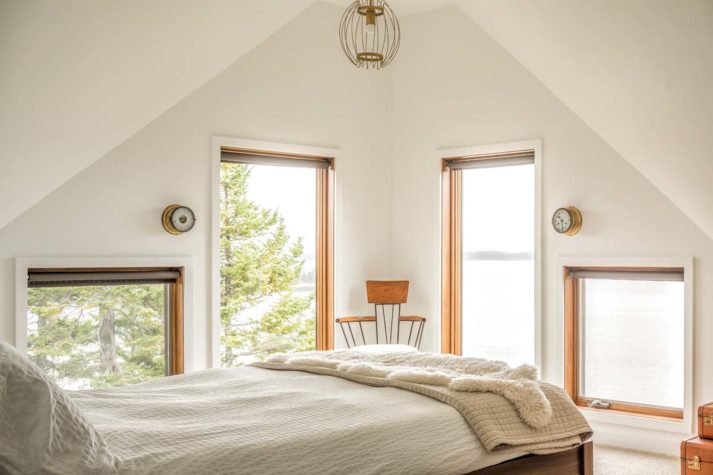 The master bedroom has oversized windows on each side of the house’s corner with stunning views over the cliff to the ocean below. “Sunrises from this bedroom are apocalyptic,” says Richard. 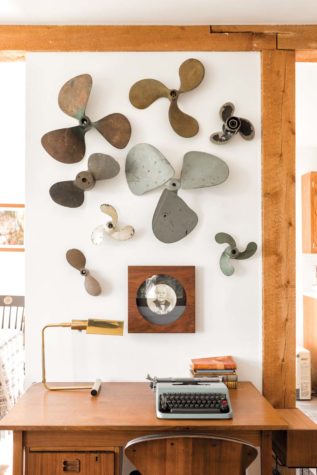 A library corner contains a wall of vintage propellers, a Danish desk, vintage books, a rotary phone in a teak box, an Olivetti typewriter, and a classic Thorens turntable. “Everything is kind of analog,” says Richard. 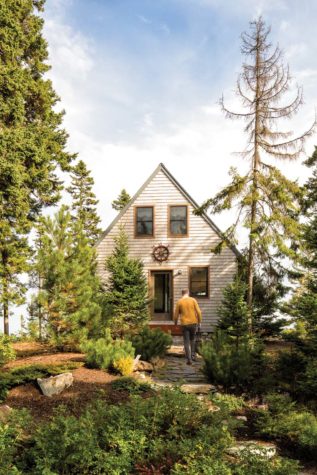 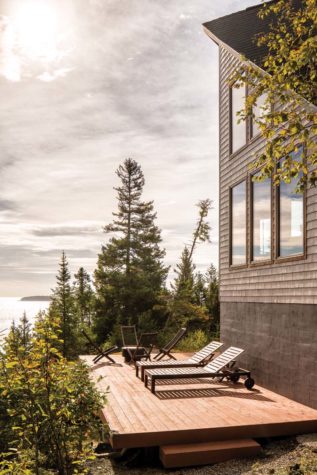 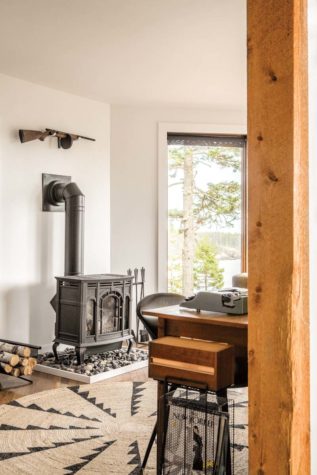 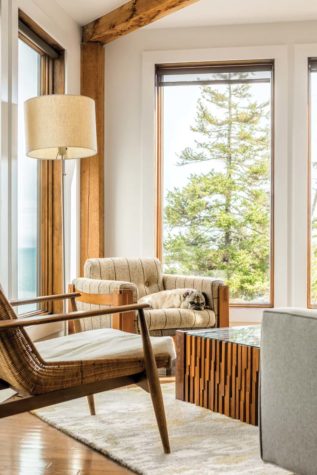 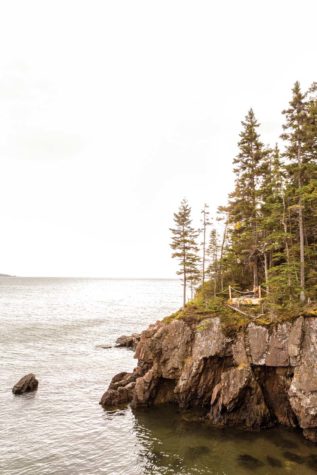 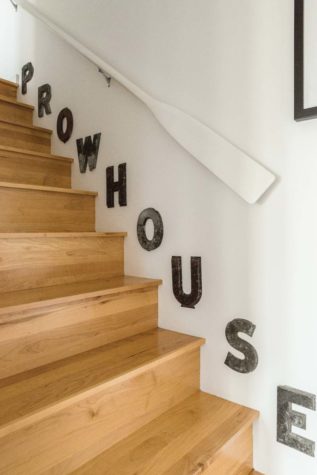 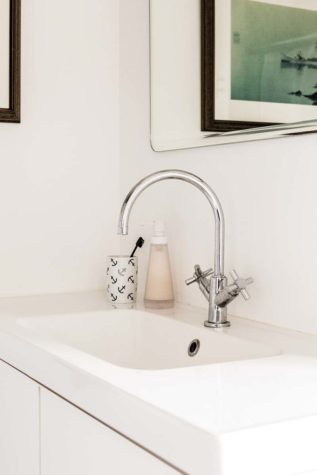 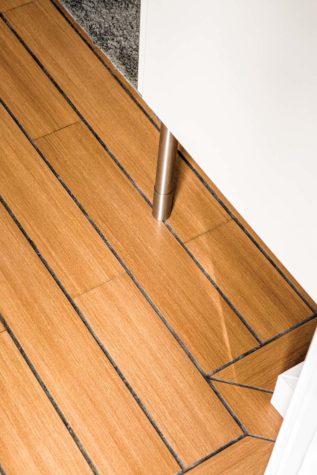 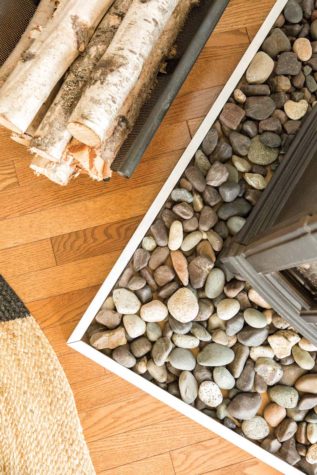 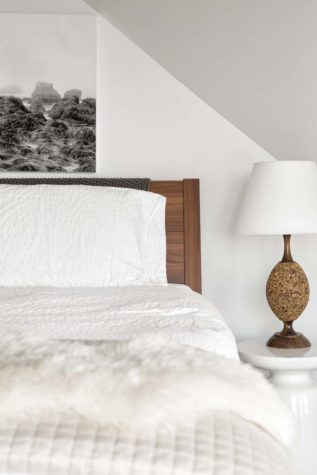 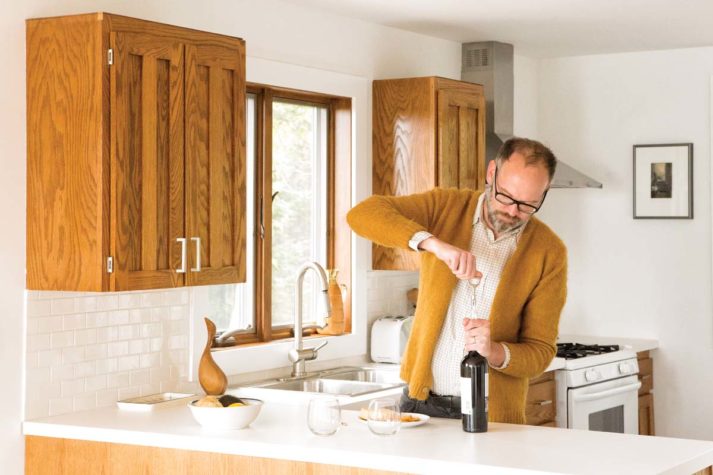 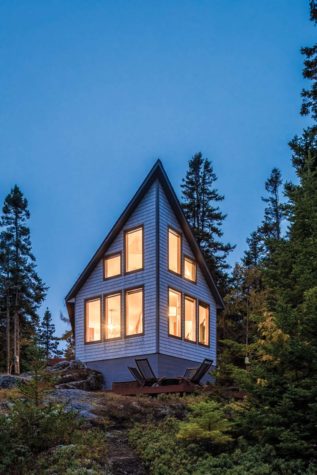 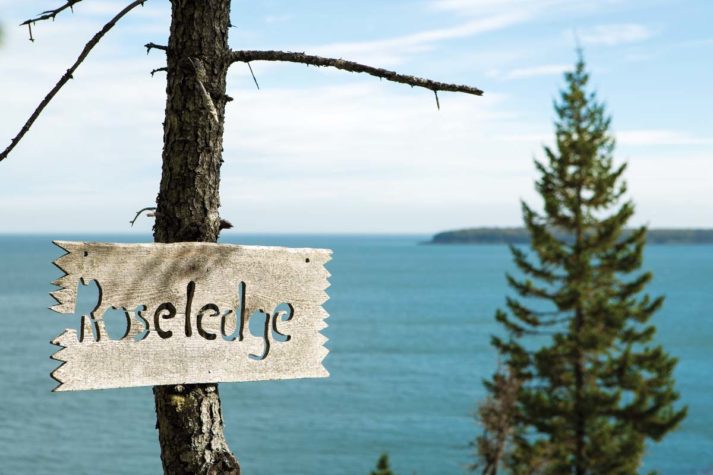 Living on the Ledge

Phil Rose, a retired English teacher and Machiasport poet, built the Prowhouse on a bluff overlooking the Atlantic with little more than his bare hands and a poet’s pension. Today, this spirit lives on in his son’s stewardship of the property.

The Prowhouse was named for its resemblance to the prow of a ship (and as a play on Bauhaus, the former German art school), but my daughter renames it on first sight. From here on out, it’s the “triangle house,” and we can’t argue with two-year-old logic. Perched on a 130-foot cliff overlooking Howard Cove in Machiasport, the place looks like your standard gabled home with pitched roof from the front. The other side brings the drama: a sharp, angular form with floor-to-ceiling windows juts into the sky. It was built by a man who loved boats to look like one. Howard Cove stretches out below and beyond it; this piece of coastline is epic, cinematic. The land is thick with forest and rock -steep and severe, raw and rugged, nature’s finest work.

These 55 acres of pristine forest alone Howard Cove have been in the Rose family for more than 110 years. When Philip Rose graduated from Bowdoin College in 1959, he was gifted a small piece of the family land by his father, Herbert Rose, a production manager at B and M Beans. It was one of the better plots, a promontory overlooking the cove, where Herbert and his wife, Pearle, used to camp. It would be decades before Phil would live there. After graduating from college, he served two years in the U.S. Army as a lieutenant, taught English for 25 years at Falmouth High School (where he also coached the girls’ basketball team), and worked as a dock master for Portland Yacht Club. He raised two sons on Cousins Island in Yarmouth.

In 2000, after watching the first rays of sunlight of the new millennium strike his slice of Machiasport cliff, Phil decided to build his own house there. ” Dad always had a flair for the dramatic,” says Phil’s son and the Prowhouse’s current homeowner, Richard Rose. “He was a true visionary, with no formal building background, beyond some boatbuilding experience and a couple cottages he helped my grandfather build.” With limited resources, Phil did the best he could, creating the angular two- story structure cantilevered on the cliff with a series of Lally columns supporting the beams. He lived there for several years before getting electricity and other modern amenities. Even then, he slept in a bedroom with exposed insulation. “He didn’t care,” says Richard. “He just loved the view.”

Sadly, Phil never had a chance to finish what he started. In 2011, on his way home from visiting Richard in Providence, Rhode Island, he died in a head-on collision on Route 1 in Belfast. “He refused to take I-95, even though it was faster,” says Richard. “He always took Route 1 back—‘the scenic way,’ he called it—because he could not bear to take the highway no matter how tired he was. The ‘scenic route’ defined his whole life.”

Armed with a deep nostalgia for Machiasport and a respect for what his father had started, Richard and his wife, Julie, decided to buy the house back from the bank and renovate it, preserving Phil’s vision. It needed a lot of work. “The house was about to go out to sea,” says Richard, “and it wasn’t up to code at all.” With their experience in design (Richard is a graphic designer and Julie is a lighting designer), they got to work, shoring things up and making the space habitable and up to code. They relocated a circuit box that was dangerously close to the toilet (“a big no-no,” says Richard), fixed noncompliant stairs, and installed drywall on the second floor, among other projects.

Julie and Richard invoked their shared love of Scandinavian and midcentury modern design to outfit the interiors. “We tried to steer clear of traditional nautical decor, but the two end up marrying really well,” says Richard. Most of the paintings and photographs throughout the house are unconventional takes on natural and nautical themes. Vintage furnishings in teak and brass—the materials of boatbuilding—fill every room, as well as furniture and art by midcentury Modernists like Paul McCobb, Norman Cherner, Percival Lafer, and Curtis Jere. Julie used her background in lighting design to choose lighting fixtures that help bring the space to life.

Following Mother Nature’s lead outside, Richard and Julie took a Japanese gardening approach to the property. “Rather than creating an overly manicured outdoor space, we kept everything natural looking and quiet and were careful not to cut too many trees down, aside from a few growing too close to the house,” says Richard. The result is moments of discovery and views that unfold as you walk the grounds. Richard also blazed a network of private trails that thread throughout the land, along the cliff ’s edge, through the trees, up stone steps, into small gorges, near animal dens— complete with little lookout areas to stop and take in the scenery. Here, Richard put his graphic design skills to work by creating trail signage and markers whose officialness rivals that of a national park.

The house and the land that surrounds it have a distinct gravitational pull. “When we’re here, we stick around,” says Richard. “My father taught me to stand still. He always said you’ll notice things if you don’t move—a leaf moving, a bird you didn’t see before. So we try to do that when we’re here,” he says. And when they are moving, they are working on being loving stewards of the property: taking care of what Phil started, battling the elements to maintain the house in all seasons.

In his later years, Phil was a member of the Salt Coast Sages, a Machias-based poetry group, with whom he published a book of poems, many of which reflect his love of the ocean, boating, and Downeast culture. He also taught navigation at the Sunrise Senior College at the University of Maine at Machias, and served on the Machiasport Board of Selectmen. He ate breakfast every morning at Helen’s in town, ordering the same thing every time (waffles, every cavity filled with syrup, according to Richard). To this day, the owners of the restaurant leave a chair empty for him.

Before we say goodbye to the triangle house, we take one of the trails through the dense woodlands, hiking over and under trees, both upright and fallen. We come to the edge of a cliff where a small platform with a rope railing holds a chair and opens up to the most breathtaking view of the cove, its towering rock formations, and Jasper Beach in the distance. The sign in Richard’s typography reads “Phil’s Rest.” Richard tells me later that the cove below is where they scattered his father’s ashes, from his cousin Joe’s lobster boat. Richard built this lookout as a place to go to meditate on his dad’s memory. Although I never met Phil, I attempt to do the same. I imagine him—a retired English teacher, a sea captain, a poet, a beloved member of his family and the community—working on this heartachingly beautiful land to build a home with his own hands, laying out each beam and board like a verse or stanza in one of his poems. Building a house only a poet could dream up. 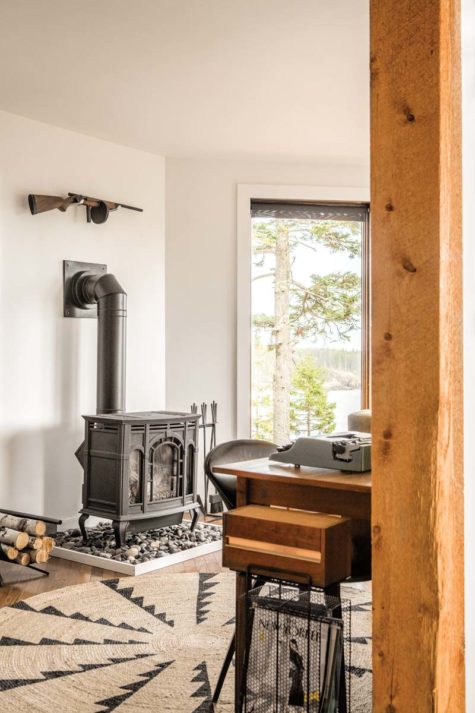 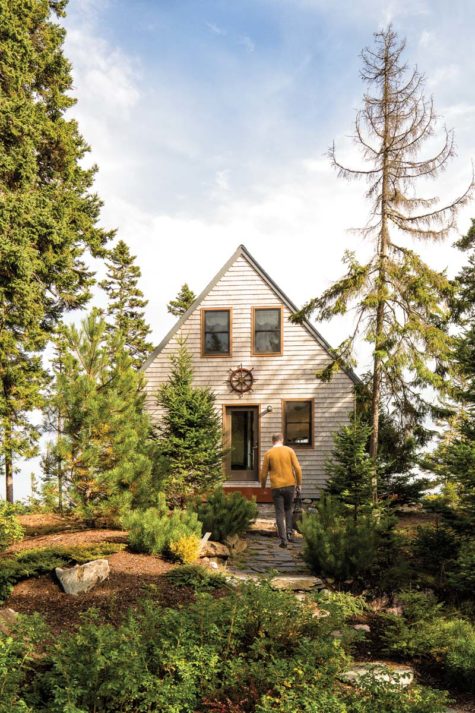 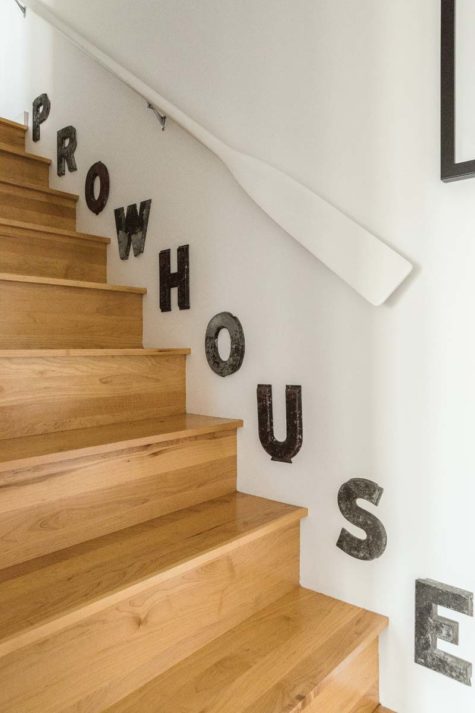