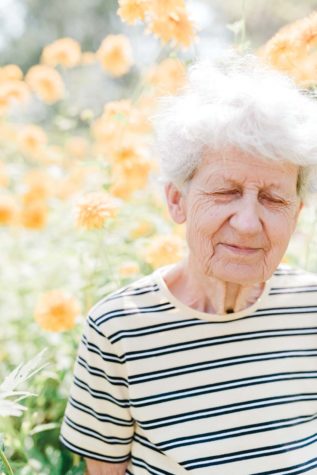 For more than 70 years Lois Dodd has sat at a canvas and taken in the world around her, translating fragments of nature into painted works of art. Dodd has long been admired for her paintings, which often depict close-ups of flowers, trunks and branches of trees, and the perspective seen through many different windows. Her works demonstrate her sharpened ability to capture complexity in simple subjects. Although she wasn’t born in Maine, Dodd has been coming here since 1951. She spends most of her summers in Cushing, splitting her time between Maine, the Delaware Water Gap, and New York. What continues to draw her back is the inspiration she finds in the immediate environment, she says. “Maine has a landscape light that is more dramatic and graphically clear than that of more southernly locations,” Dodd says. “The strong light-and dark-value contrast provides a visual simplification of shape and forms and denies disruptive detail.” Dodd, who is now 92, has since 1998 been an elected member of the American Academy of Arts and Letters, an honor society comprising 250 renowned artists, architects, writers, and composers throughout the United States. In addition, Dodd has taught at a number of schools, including Brooklyn College, Queens College, Wagner College, and the Skowhegan School of Painting and Sculpture, before retiring in 2011 from her nearly 50-year teaching career. She now focuses her time on continuing to capture the moment on canvas. “I do it for myself, and if other people see something in it, great. But, first and foremost, I must challenge and please myself,” she says. “The more personal an expression can be is also the most universal it can become.”