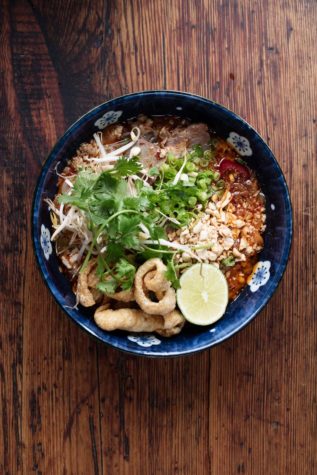 Spicy Night Market noodle soup was served to restaurant staff and friends before becoming a Long Grain menu staple. It features ground pork and slices of roast pork from Maine farms, noodles, and vegetables in a flavorful broth, topped with peanuts and fried pork rinds. 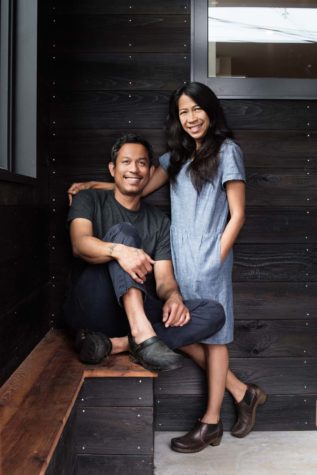 Chef Ravin Nakjaroen, left, and his wife, Paula Palakawong, opened their restaurant in 2010 on Elm Street, Camden’s main thoroughfare. This past June, they moved it into a completely r enovated space on Washington Street with a few more seats and a much larger kitchen. 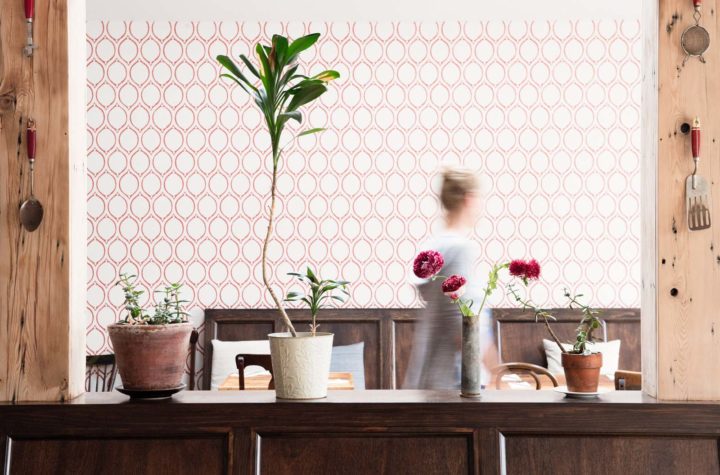 Long Grain’s new space recalls some elements of its original location, including a wall papered wall and the display of vintage kitchen tools. 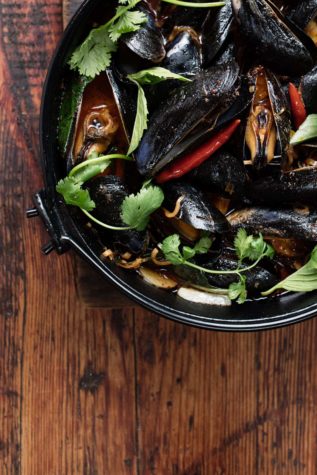 Nakjaroen’s mussels in spicy lemongrass broth were served at his first restaurant in Florida, and he has carried the recipe with him to subsequent kitchens. 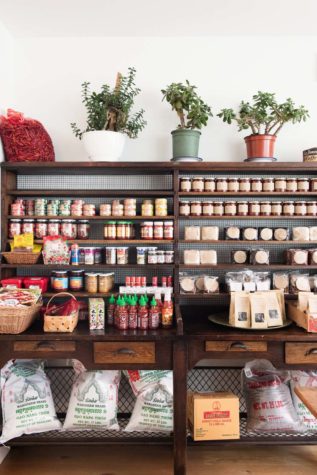 Long Grain now has an Asian market, which sells many products not previously available north of Portland; customers can purchase jars of Long Grain’s “Magic Sauce,” displayed on the shelves at top right. 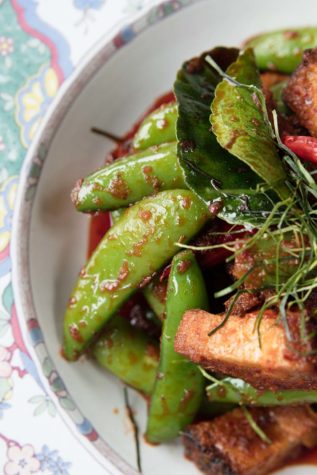 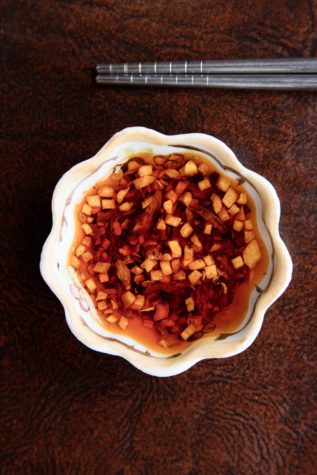 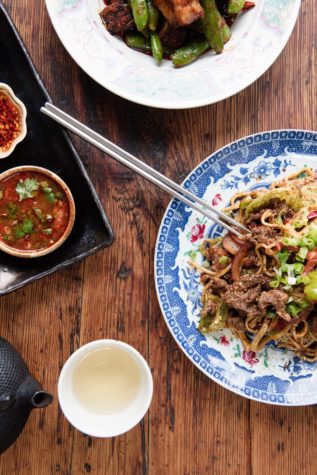 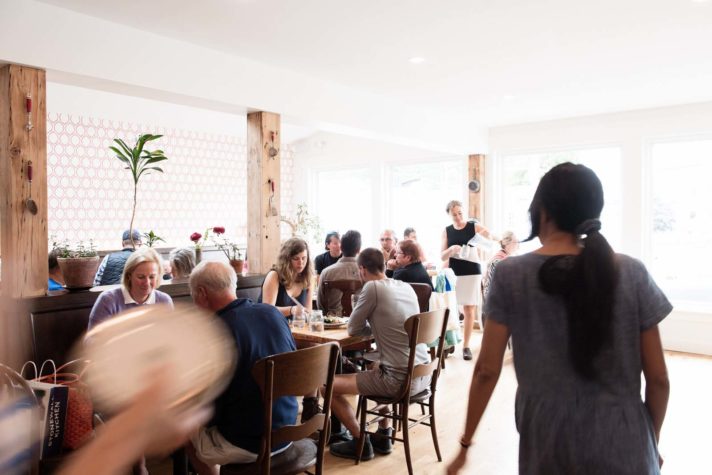 Long Grain’s dining room is open and airy, with well-spaced tables and a casual vibe.

The celebrated Camden restaurant has a new space, a broadened menu, and a continued focus on Asian comfort food

In early August, Bon Appetit magazine named Portland the 2018 Restaurant City of the Year. It’s a big accolade for Maine’s largest city, which is small by national standards. But, as Mainers and food writers from well beyond the state also know, restaurant greatness is not limited to Portland. Witness Maine’s 11 James Beard Award semifinalists this year, 5 of whom are from outside the city. One of these, and a semi-finalist for the fifth time, is Ravin “Bas” Nakjaroen, chef and co-owner along with his wife, Paula Palakawong, of tiny Long Grain in Camden. Entirely self-taught, Nakjaroen has made his mark with what he says is the simple food of his childhood, prepared with local ingredients and a good measure of both pride and love.

Nakjaroen came to Camden in 2009 from Fort Lauderdale, Florida, where he and Palakawong—both natives of Bangkok—had owned a Thai restaurant for three years, and where he received his first James Beard Award nomination. He had been recruited to open a now-closed Camden restaurant, White Lion, and she was eager to raise their baby daughter, Py, somewhere other than Florida. They had had no plans for another restaurant of their own, but in 2010 they opened Long Grain in a narrow leased space with no signage on Elm Street, Camden’s main thoroughfare. The New York Times discovered them in 2012, and the first James Beard Award nomination came in 2014. The following summer, the couple bought a building just around the corner on Washington Street. The ground floor had once housed a pizza restaurant, Zaddick’s, as well as the short-lived Fromviandoux. Nakjaroen and Palakawong spent two years on an extensive renovation then opened at the new location this past June. “We didn’t share much,” says Palakawong, who kept the project’s progress a mystery. “I didn’t post any photos on Facebook or Instagram—we were just too busy.”

Both inside and out, the new space displays the style and character that defines Nakjaroen’s cooking. The clapboard that wraps the exterior was finished using the Japanese process called shou sugi ban, in which the wood is charred to preserve it and make it weatherproof. Inside, a display wall of open shelves divides the dining room from the new Asian market, where a rustic hutch holds jars of Long Grain’s “Magic Sauce.” The bright, airy space resembles a modern French bistro more than a typical Asian restaurant, with a marble-topped bar and a dark wood bench against a wall papered with a contemporary pattern. Vintage finds, including milk glass lamps and a collection of kitchen tools from the old space, hang as wall art, creating a minimalist yet warm decor. Tables with mismatched chairs are widely spaced. “We didn’t move because we wanted a larger restaurant,” says Palakawong, adding that there are only five or six more seats here than at their previous location. “We needed a better kitchen, and we wanted the restaurant to be comfortable.”

On this Friday afternoon, most of the tables are still occupied with customers finishing lunch while I chat with Palakawong and Py, now a friendly, chatty nine-year-old who helps out in the market. “The old kitchen was so small; there were a lot of things that we wanted to do that we couldn’t do,” Palakawong says. One of these was Peking duck, which Nakjaroen prepares in the traditional manner: basting the whole birds with a soy sauce–based mixture, blowing air underneath the skin so it will crisp in the smoker, and hanging the mahogany-skinned smoked ducks in an interior window display alongside glistening slabs of smoked char siu pork belly and ribs—visible to diners from a hallway. Diners eager for Peking duck are advised to make an early reservation; the dish sells out quickly, says Nakjaroen.

He now has space to hand-pull the broad, flat wheat noodles that share a bowl with spicy, tender chunks of Szechuan-cumin lamb—locally sourced, as is the pork, chicken, seafood, and much of the produce in Nakjaroen’s dishes. Ground pork and slices of roasted pork belly mix with rice noodles, ground peanuts, and a heady blend of spices in the Spicy Night Market noodle soup, a particular favorite of his wife’s. The dish wasn’t originally on the menu, though. “We thought it was too spicy, too much going on,” Palakawong says. “We started to make it for our friends and staff to try, and they loved it. We discovered people want to be surprised—they don’t like things that are too simple.”

While Nakjaroen is continually expanding his repertoire, his mussels in spicy coconut-lemongrass broth is a dish he has carried with him from the restaurant in Florida, to White Lion, and now to Long Grain. The plump, meaty mussels—preferably Pemaquid but always from Maine—are bathed in a rich, aromatic, and perfectly balanced broth, in which the lemongrass strikes just the right note and slivers of kaffir lime add brightness. Balance is also the word that comes to mind as I sample a fragrant and soulful prik khing curry with pork belly, a classic Thai dish that usually contains green beans; here Nakjaroen has substituted local, in-season snap peas. Palakawong says dried shrimp is key to the rich flavor of the curry.

Home-style Thai dishes such as the curry are the foundation of Long Grain’s menu, but the new, larger kitchen allows Nakjaroen to branch out into other Asian cuisines. “We used to do Thai and, here or there, Korean or Vietnamese,” says Palakawong. “Now we do a lot more of everything: Indian, Chinese, Taiwanese—far beyond just Thai food.” For inspiration, the couple returns once a year to Bangkok, which, like any large cosmopolitan city, has restaurants of all types. They also travel internationally, “always where there is good food,” says Palakawong. Yet Nakjaroen doesn’t stray far from what he learned in his childhood kitchen. “We’re just focusing on simple food; we try to go back as far as we can,” he says. “It’s more from my memory when I was a kid, but we’re also trying to make it as good and as high-quality as possible.” He is serious about representing Asian culture, but doesn’t hesitate to use Maine ingredients such as garlic scapes, ramps, or smoked mackerel from Ducktrap River of Maine in Belfast. The result is a menu full of dishes that “people are not just willing to try, but eager to try,” says Palakawong.

Both she and Nakjaroen are deeply appreciative of how they have been received in Camden and value their relationship with the community. “We love to have all types of customers: teenagers, older people, families, workers taking a break for lunch,” she says. This mission is reflected in the prices, which are reasonable, and the portions, which are generous. “Good food doesn’t have to be expensive,” she says. Main dishes range from $12.50 to $17.50, and specials top out in the mid-20s.

Our conversation winds down as the restaurant’s daily break between lunch and dinner nears its end. Servers—many of whom have been at Long Grain for years—are quietly resetting the tables, and Nakjaroen returns to the kitchen. The mood is cheerful and calm, and I find I’m reluctant to leave this homey place. But Palakawong is packing up my leftovers, sending me off with boxes of flavor memories. I find when I get home that she has included the broth from the mussels, all of which I had eaten. She knows, and I agree, it is just too good to waste. 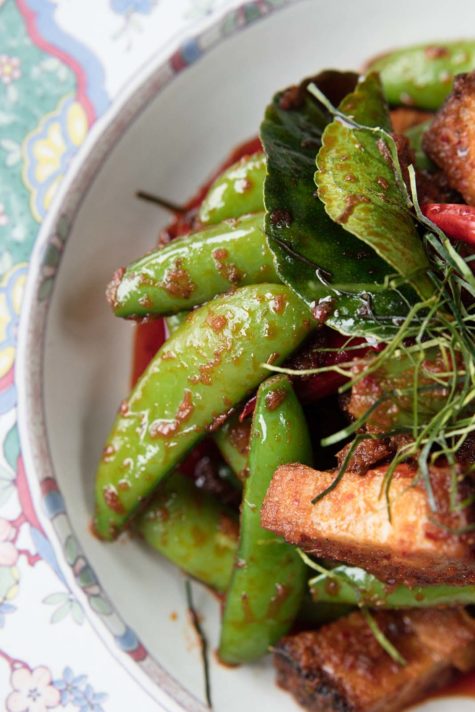 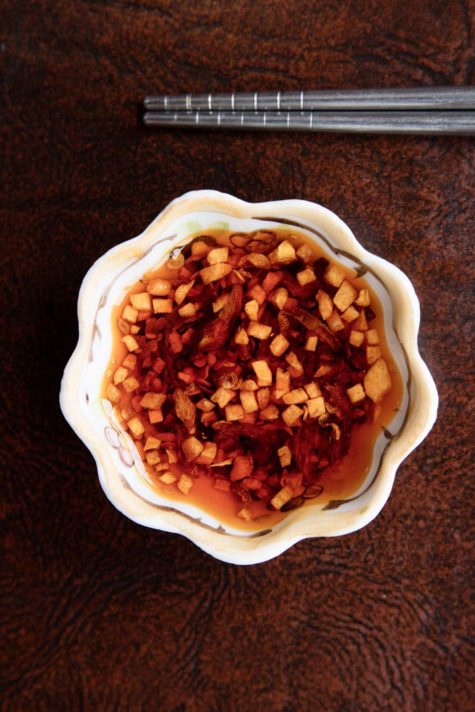 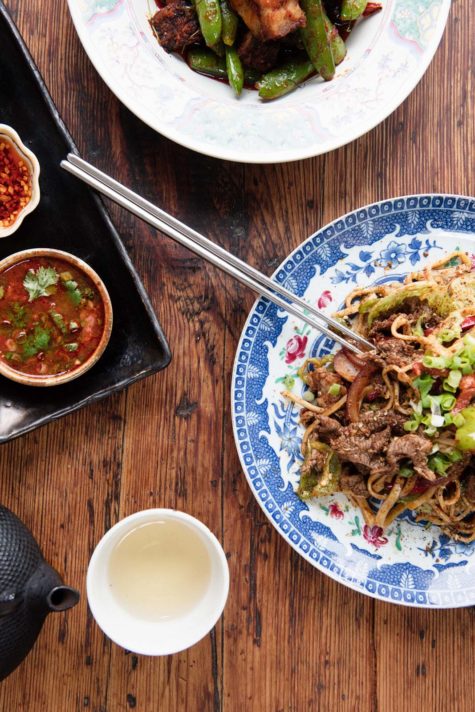