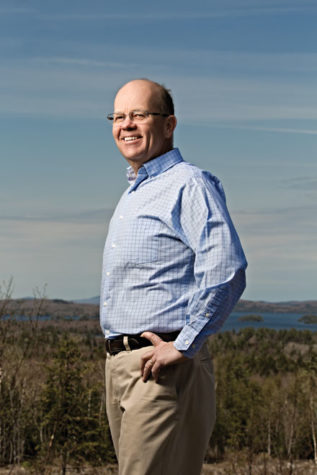 Luke Muzzy has deep ties and affection for the Moosehead Lake region—his children are the fifth generation of his family to grow up there. “I’m proud of maintaining the legacy of my family’s connection to Moosehead Lake,” says Muzzy. “It’s pretty special to walk in the same footprints as my ancestors and to know that my wife and I are doing our part as stewards and keeping the legacy intact.” Muzzy is the senior land asset manager for Plum Creek and he served as the first and only project manager of the Moosehead Lake concept plan. The plan permanently conserved 400,000 acres for public access in perpetuity. While Muzzy feels strongly about preserving the gorgeous Moosehead region and feels connected to its history, he also hopes to bring economic vitality to the area. He is the president and a founding member of the Moosehead Lake Region Economic Development Corporation, formed as a nonprofit in 2013 with the mission to grow and sustain local businesses, attract and create new jobs, and enhance the economy of the Moosehead Lake Region. Muzzy is also president of the Moosehead Marine Museum, which operates the 100-year-old steamship Katahdin as a “living museum” for the benefit of the community, region, and future generations.