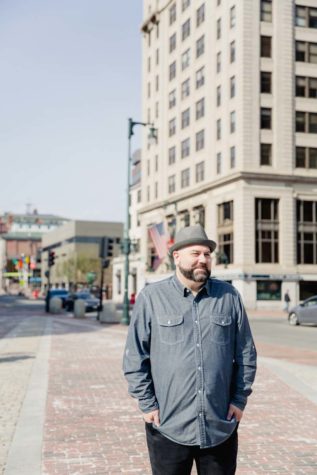 Director of lifestyle and entertainment branding at Shipyard Brewing Company, and radio host at WCYY

A few years into his time at Portland rock station WCYY, Mark Curdo had the urge to create a unique fundraiser. His idea: lock himself in the radio studio for 102 hours straight and take requests on the air for 21 hours a day. Curdo starts at noon on a Monday and ends at 6 p.m. Friday, sleeping or resting only three hours a night. Called Markathon, the benefit raises money for the Center for Grieving Children. Since December 2008, the annual event has raised close to $300,000 for the organization, which provides support to bereaved children and families. “People call in and request anything they want to hear. Anything at all,” says Curdo. “Slayer to Sinatra to Snoop to Sade to the theme to Scooby Doo,” he says. “Anything, as long as they make a donation to the Center for Grieving Children.” During the marathon, Curdo talks about the organization and interviews families who use or have used its services. “The work they do to help folks in the worst times of their lives, to give them the strength to begin moving forward—I don’t know how someone can be so strong and magical to do that kind of work,” he says. Earlier this year, Curdo left the full-time job at WCYY to lead lifestyle and entertainment branding at Shipyard Brewing Company.