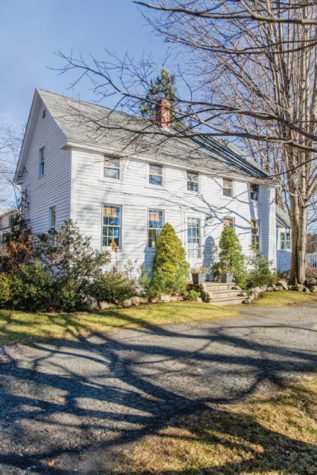 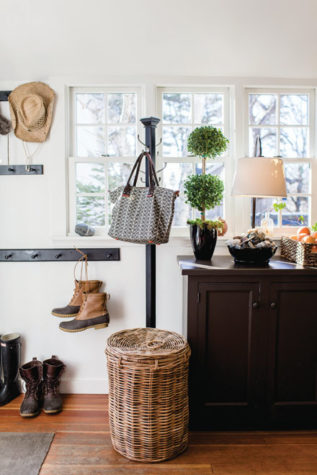 Rhonda and Ben Birkbeck’s Yarmouth home is just 850 square feet. Every square inch is maximized. The entry area features Shaker racks, a basket for seasonal accessories, and a bowl of rocks collected from the family’s travels. 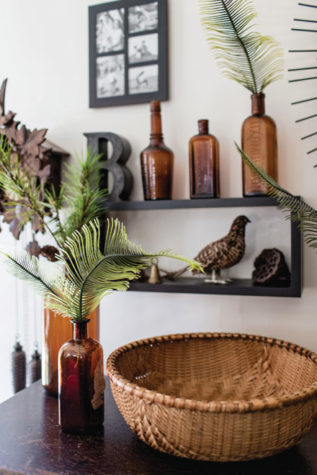 “Each item in the home tells a story and reminds us of where we are and where we have come from,” says Rhonda. 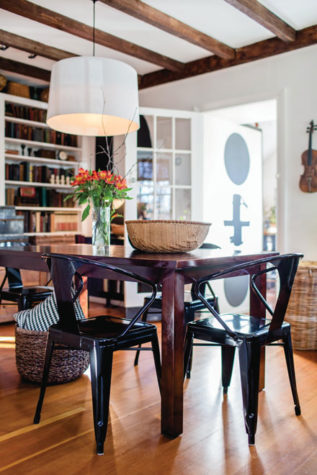 The dining room is the ceremonial center point of the house. “It’s a place of shelter from the world where our stories and lives all come together each and every day and every night.” The table serves double duty: by day, it’s a desk and by night, a dinner table. 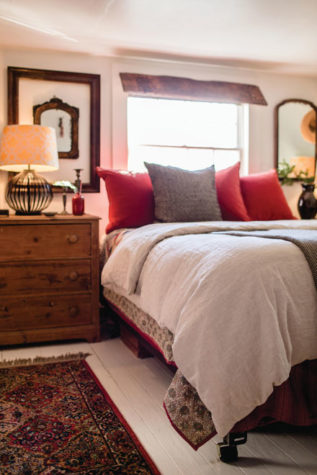 In Rhonda and Ben’s bedroom each item has a history: the mirror is the first antique the couple bought together in 1994 at auction for $2. The quilt was a wedding gift from Ben's mother and father. 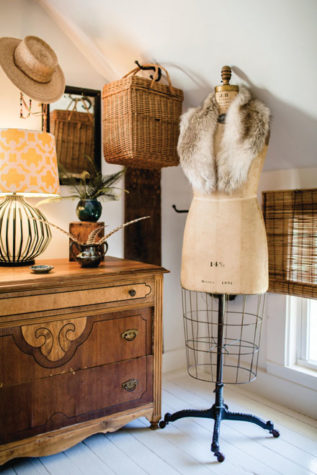 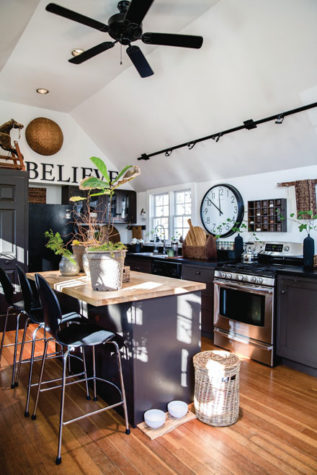 The kitchen is housed in a restored shed that was moved up from the back of the property. “It’s part greenhouse, part gathering space,” says Rhonda, who is an avid cook, herbalist, and gardener. The kitchen resounds with examples of her love of nature plants, and herbs are the centerpoint—it is a place where the outdoor gently mixes with the world inside. 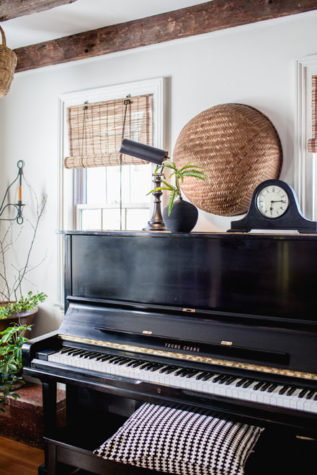 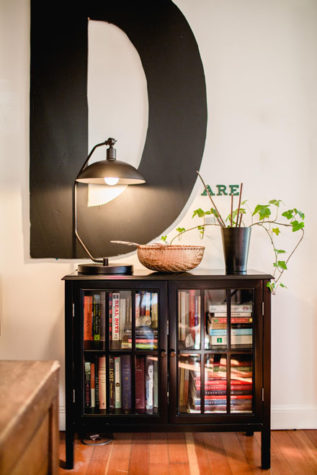 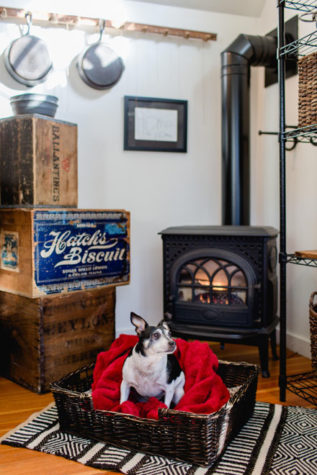 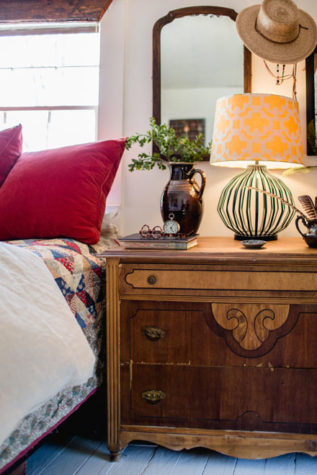 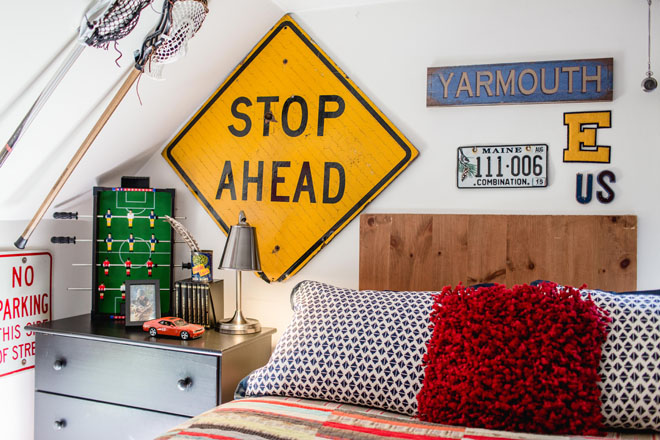 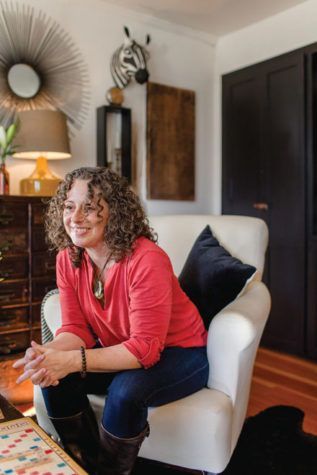 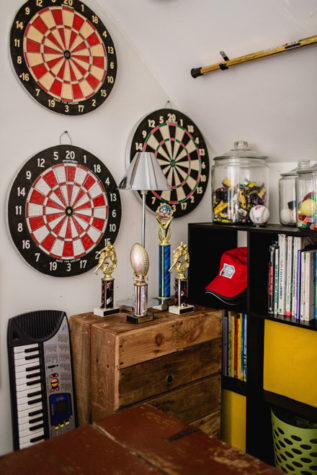 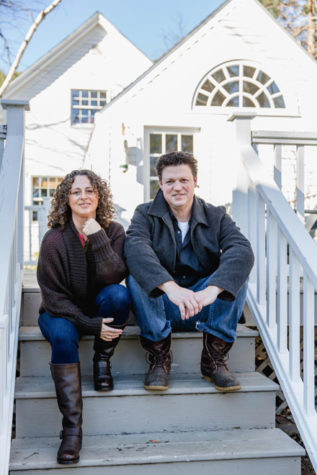 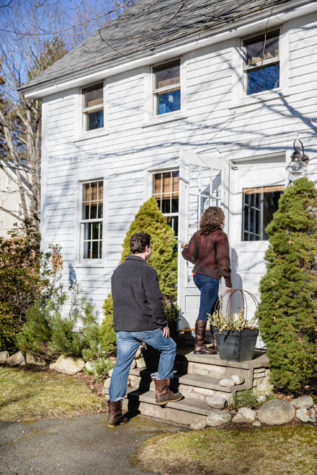 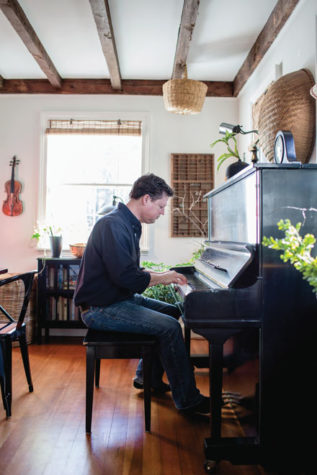 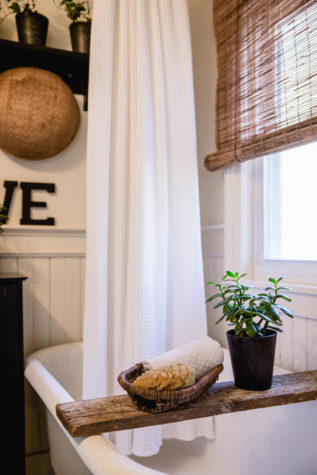 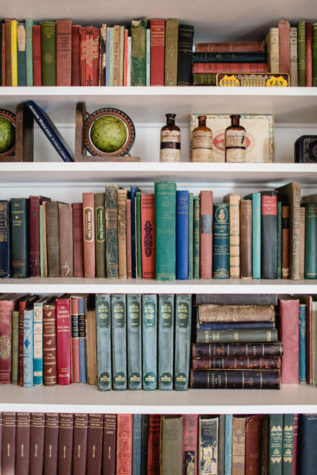 A designer and a composer's house in Yarmouth is small in size but big on heart.

If houses are measured in square feet, then homes ought to be measured in heart. At 850 square feet, Rhonda and Ben Birkbeck’s Yarmouth house is relatively small, but the size of the home they’ve created there? Encompassing. Abundant. Full. Rich. One of the biggest I’ve seen. (And I’ve seen a lot.)

Rhonda, an interior designer, and Ben, a composer, have lived in houses of all sizes. After opening homewards shop Dunne Roman in both Kennebunkport and Portland, they moved from Kennebunkport to a restored home in Portland’s historic West End and then to a stately 18-room officers’ quarters on Great Diamond Island. The year 2004 brought changes and challenges that included the loss of their beloved store, the sale of their home, and a move from the island to a one-room bungalow in South Portland. Going from 5,000 square feet to 500 square feet in a day was a lesson in living. “It taught me so much about what we need, and how to use what we really need,” says Rhonda. Both of them worked out of the house; things were tight, quarters were cramped. One night, Rhonda lay awake, feeling down, wondering how this had happened. In the dark, she could hear the gentle rise and fall of breathing from Ben and their son, Duncan, asleep beside her. “I knew right then that everything I needed could fit in that house.”

As Duncan got older, the couple considered moving to Yarmouth for its schools and community. When Rhonda first found the historic house on East Main Street online she knew if she set foot inside, that would be it. She was right; it’s ten years later, and the Birkbecks have created a space filled with heart, intention, and beauty.

Some say the house dates back to the 1700s, others the 1800s. The woman next door remembers when it was just a two-room, one-floor house. Eventually, an upstairs was added, and the shed in the back of the property was moved up and attached to the main house. Now the shed is the Birkbecks’ kitchen, filled with black cabinetry, baskets, and old wooden crates turned into storage.

In the dining room, a table used for both eating and working sits between built-in bookshelves at one end and a piano at the other. (Duncan has to move the table when it’s time for him to sit down to practice.) Off the dining room is the family’s sole “lovingly shared” bathroom. To the left of the stairs is a living room with Rhonda’s “office,” which consists of a shelf with a laptop (the couple shares a studio down on the river in Yarmouth). Upstairs, there are just two bedrooms: the couple’s and Duncan’s. Rhonda recalls when Duncan was little and would have friends over. “One time, this little boy came racing right up to the top of the stairs and was like, ‘Wait, where’s the rest of it?’”

Rhonda’s aesthetic is far more modern than the way they live now, but she loves the stories older things tell. “I think the contrast of the old and the new is what really excites me,” she says. When they moved in, they had nothing, so almost everything in the house is from the town dump. Ben is the picker, bringing home his finds for Rhonda to incorporate. “In a small house, everything is storage, so if it has a drawer or a lid, it comes in and becomes something,” she says. And since it’s out and on view, it has to be beautiful.

To understand how the Birkbecks live, consider Rhonda’s childhood. She grew up in Maine, the daughter of a Pentecostal minister. Her family didn’t have much in the way of material things. Her grandmother was a poor farming woman, but when her sons came off the hayfield for dinner, they would wear button-down shirts at the table, and the milk was always served out of a pitcher. “She lived far more beautifully, if we consider beauty being the way we live, than people with ten times her financial worth,” says Rhonda. As a little girl, Rhonda remembers laundry day and seeing all the sheets hanging out to dry. “It was my favorite day of the week because my grandmother hung them a little differently every time, and they were like a work of art.” This experience alone seems to have influenced Rhonda’s sense of space and her knack for finding the beauty in the mundane.

What I learn from Rhonda is that with her emphasis on the way she lives rather than on the things she has, living becomes more about ceremony and ritual, especially in a home of this size. Because there isn’t a mudroom or a designated entry area, for example, there is an entry ritual: you take shoes and coats off at the door, and then later move them upstairs and out of the way. These things can’t pile up because there isn’t room for them to. Everything has a designated place: the family’s cell phones line up next to one another on the counter; the mail goes in a bin; the bags hang on the hook. There’s even a nightly incense ritual. “Since there’s no place for the smells to escape after we’ve cooked, we light fragrance every night,” says Rhonda.

Perhaps the best evidence for ritual in the Birkbeck home is what I consider the most mundane of activities: laundry. In my house this is a dreaded chore, reserved for Sundays when I lug the overflowing bag downstairs and begin the sorting, loading, emptying, and folding to the accompaniment of beeps and buzzes. There is little joy in this, aside from when it’s over and the clothes are put away. For Rhonda and Ben, laundry is just another ceremony. Since their “laundry room” is really just a washer and dryer stacked in a tall cabinet next to their refrigerator, it’s right there, a fabric of their everyday lives. “It’s constant and I love it,” says Rhonda. “I’ll be cooking, and something’s tossing around in there. I don’t even think about it as a chore.” She once worked with a friend who hated doing the laundry. “No matter how many times I tried to get inside her head as a friend and a designer to figure out how we could create her space so she actually enjoyed it, it wasn’t until I just went out and bought her laundry detergent that smells amazing that she turned around. I think we get so busy trying to avoid, rather than accept and make it something that we enjoy.”

It’s hard to be in the Birkbeck home and not think about that oft-used William Morris quote: “Have nothing in your house that you do not know to be useful, or believe to be beautiful.” For Rhonda, most things in her house are both—they have to be. “When you live in a house this size and live in a world with my budget,” she says, “you want to make only one purchase.” Take for example her hairbrush. Rhonda picked it out because she likes not only the way it looks, but the way it feels, and she doesn’t mind seeing it left out on the counter.

At its most basic level, this is the essence of what Rhonda tries to do in her clients’ homes as well: help people see the world from a different perspective. “By elevating the mundane and celebrating the ordinary in the everyday, I feel my work can find the essence of a home, and bring it to the forefront where it belongs—that place where art, reflection, mindfulness, and story mix.” As a designer, Rhonda is really helping to create lives, not houses—lives in the balance, lives in process, lives in the midst of circumstance.

Right before I leave, Rhonda admits there are moments when she feels a tug toward a little more space, toward not tripping over each other all the time. Just as quickly as the words land, she says this: “I think there’s no greater joy, honestly, than living with what you have.”

When I walk out of her cozy, curated home, and into the world, I think about this idea. Of living intentionally. Of living with less and yet so much more. I think of the beauty this creates, the presence of mind it takes to slow us down, to appreciate the quieter moments in our homes, in our lives. I think of being in a room with the sound of loved ones breathing and knowing, like Rhonda knew that night, how lucky she is to have everything she needs already, right within her reach. 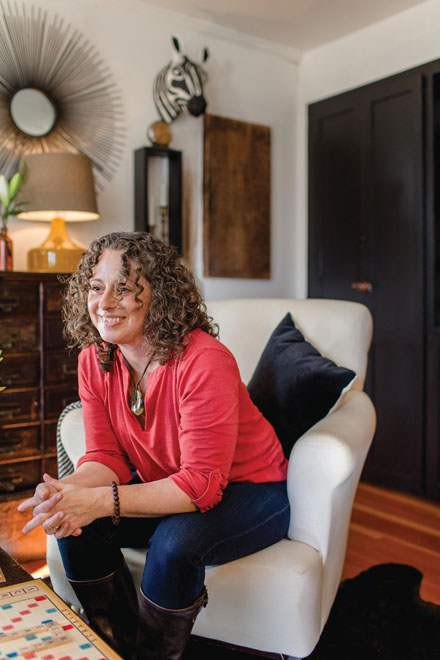 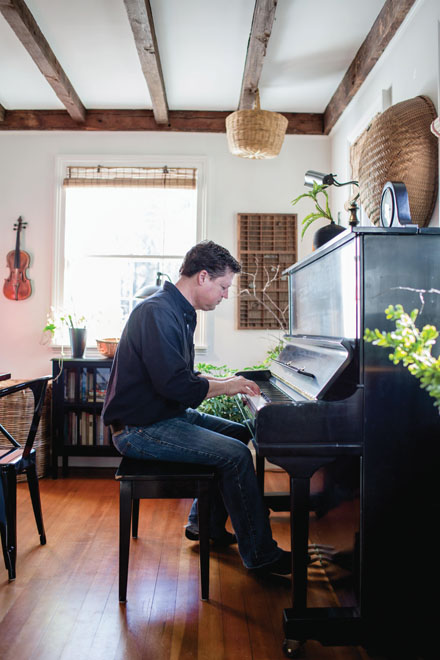 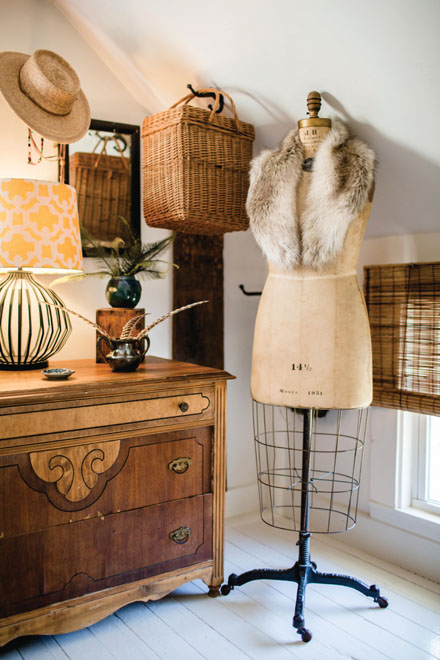