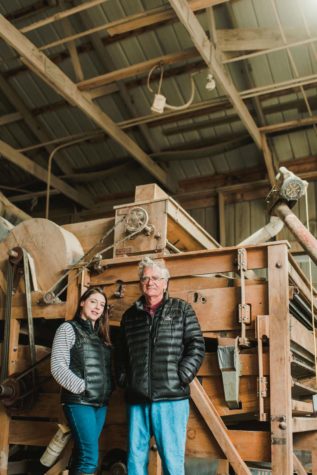 For more than two decades, Matthew Williams has been pioneering the growing of grains in Maine. The Aroostook County farmer and former grain agronomist with the University of Maine Cooperative Extension first started growing food-grade wheat in the late 1990s at the encouragement of Borealis Breads owner Jim Amaral, and later expanded his Linneus farm to include a milling operation. “They were the grandfathers of bringing back local grains to Maine,” says Williams’s daughter, Sara Williams Flewelling. She joined the farm with her husband, Marcus, in 2013. Since then, they’ve grown the farm by five times, helped reestablish Maine’s grains infrastructure, and created new markets for themselves and other farmers in Aroostook County. They visited Japan with the owner of Yosaku in Portland, Takahiro Sato, to learn how to grow buckwheat, which Sato now uses to make soba noodles for his restaurant. Williams Flewelling says they like to partner with companies that share their social mission, such as One Mighty Mill, a company in Lynn, Massachusetts, that mills Aurora wheat on-site to make bagels, pretzels, and other baked goods. Aurora Mills and Farm also supplies Allagash Brewing Company, which has pledged to use one million pounds of local grain annually by 2021.