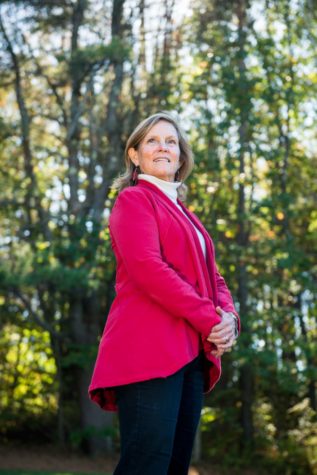 In Maine’s business development world, Sandra Stone is well known for mentoring, advising, and investing in entrepreneurs. The chair emeritus of Maine Angels, a private investor network she led from 2011 to 2015, Stone is credited with expanding the group’s membership and portfolio, encouraging more women to participate, and championing women entrepreneurs. Closer to her home in Cumberland, however, she may be better known for her contributions to high-school sports, one arena in which the tenacity and innovative thinking that serve her current mission were honed.

In 1998, Stone’s only child, Alex Knecht, was a freshman at Falmouth High School (FHS), where he wanted to play lacrosse. The school did not have a team, and when Stone approached the principal, she was rebuffed—lacrosse was a private-school sport, the principal said. However, Yarmouth High School had a team, and since Alex’s father lived in Yarmouth, Stone asked the athletic director there if her son could play with the school’s Junior Varsity team. Again the answer was no. “I went back and asked the Falmouth principal, ‘Would you let me see how much interest there is? Could I start a team?’ Forty kids showed up” to an information session, says Stone. Her next obstacle was finding fields. Then-FHS soccer coach Dave Halligan suggested she try the Governor Baxter School for the Deaf on Mackworth Island—its fields were only used in the fall for soccer, and lacrosse is a spring sport. Stone’s pitch to the school’s athletic director included an offer for the hearingimpaired students to play too, but he said he couldn’t provide insurance. She knew that players and coaches were insured if they joined US Lacrosse, so she contacted the national association, which sent her an insurance binder. “Within 24 hours I got back to the guy over at Mackworth,” says Stone. “He said, ‘Really? That’s impressive. That kind of communication, and that kind of proactivity, you’re on. Let’s go for it.’”

In 2011 the FHS boys’ lacrosse team won its first state championship, and although Stone would insist that the credit be shared, it was her tenacity that launched what is now a sports dynasty. She had similar success as the Falmouth High School varsity girls’ tennis coach, developing a team whose record for the two years before she started was 3 and 21. When Stone retired 13 years later, the team had racked up eight consecutive state championships—10 overall. “I like starting things, being creative, figuring things out, working with people, and building a team,” she says. “Well, it’s no surprise what I do now.”

Stone grew up in Chicago, where she was a middle child, bookended by brothers. “I’m used to being in a male environment, and I’m comfortable there,” she says. Yet she was drawn to then mostly male Bowdoin College by the enthusiastic welcome she received from female students on a visit to the campus, and joined Bowdoin’s third freshman class to admit women, graduating with a degree in economics and political science. After helping run a friend’s theater company and a stint in banking, she went into business with her then-husband, her son’s father, running a fleet of commercial fishing boats out of Portland. “We were applying the theory of business to fishing, which is if you have a capital asset— like a fishing vessel—it’s only worth anything to you if it’s working for you,” Stone says. “So we became the managers of everything that happened once the boat hit the dock,” which reduced the time each vessel spent in port.

After the marriage ended, Stone started a consulting business, using her financial and computing skills to help other small businesses and nonprofits. In 2005, she joined the Maine Center for Enterprise Development, now the Maine Center for Entrepreneurial Development (MCED), a nonprofit business technology incubator. She was instrumental in launching the organization’s Top Gun program, through which high-potential entrepreneurs receive specialized training and mentoring. “My six years with MCED gave me experience from the perspective of the entrepreneur and helped me learn the ecosystem of the resources that were out there,” says Stone. Her time there also overlapped with coaching girls’ tennis, where she was acutely aware of her significance as a role model. “Half the matches I coached in my work clothes,” she says. “So they have a female coach, who’s a working woman, who’s taking an interest in them, and is someone they can look up to.”

Stone had an investment portfolio, but had not invested directly in a business start-up until early 2008, when it appeared that MCED might have to close its doors. “We had applied for a grant, and when we were told we were deferred to the next quarterly cycle it put us in too precarious of a cash-flow bind,” she recalls. “We really thought we would have to close until some additional emergency money was identified from other sources.” She was working with an entrepreneur —an MCED onsite client—who needed $10,000 to make his match for an Maine Technology Institute (MTI) grant. “I thought, if I’m not going to be employed here anymore, I can do that. He said, ‘Thank you, but no, you have to be an accredited investor, and you have to be able to check off all these boxes (about income and net worth).’ And I said, ‘I can.’” Learning of her interest in start-ups, Stone’s investment advisor, who was a member of Maine Angels, invited her to attend one of the group’s meetings, and she did.

When Stone joined Maine Angels in 2008, there were few active women members, and the group was not especially friendly to entrepreneurs, requiring them to undergo a lengthy vetting process for minimal funding. “I thought I really needed to join an all-women’s investment group,” she says. In early 2011, she connected with Golden Seeds, a Bostonbased forum of the national angel group that invests only in companies with a woman in a top-level position. The National Angel Capital Association (ACA) meeting was held in Boston that year, and through her new female angel connections there, Stone gained warm introductions to several other New England angel groups to see how their meetings were run, hoping to broaden Maine’s network. She discovered there were two things preventing Maine Angels from partnerships with other angel groups. It did not participate on an online investment platform (then called Angelsoft, now known as Gust), and it had not signed a “diligence treaty,” an agreement between groups to hold each other harmless in the sharing of due diligence materials. When she was asked to chair Maine Angels, Stone said yes, on the condition that the group would vote to approve both processes prior to her taking office. Now two to three entrepreneurs pitch the group at its meeting on the fourth Friday of each month, and 11 women are active members out of about 65 overall members. The Maine Angels has been recognized among the most active angel groups in the country, investing $19 million in 71 developing companies since its inception.

Stone continues to work at recruiting women as investors and championing women entrepreneurs, serving on the advisory committee for the Maine Mentor Network, a program of the MCED. “There have been entrepreneurs I’ve helped, not through a financial investment, but just by meeting with them, mentoring them, or connecting them,” she says. She meets regularly for coffee with a woman business owner who “just needs somebody to bounce ideas off of. My strength and where I really think I have value to add is that I’m a connector and I know the players. ‘Maybe you want to go to the Women’s Business Center at Coastal Enterprises, Inc.,’ or ‘Oh, you really need to go talk to Nancy Strojny at SCORE.’” While she describes herself as an introvert when it comes to large groups, one-on-one is where Stone says she’s at her best. “I feel good when I can be helpful. You suggest a resource or make a connection, and all of a sudden you’ve made this huge issue for somebody so much less of one.”