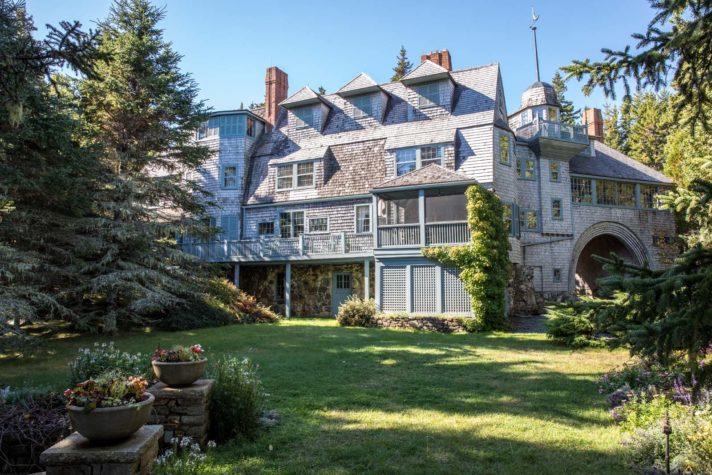 The ocean-facing side of Kragsyde shows the many dormers, chimneys, and windows that help make it such a distinctive structure. After working on the house for years, Goodrich became inspired to write about the original Kragsyde’s owner, George Nixon Black. February 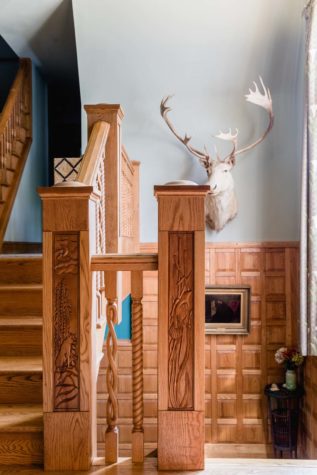 Goodrich’s husband, James Beyor, did many of the intricate carvings found around the house, including these wolf-and blackbird-adorned newels. 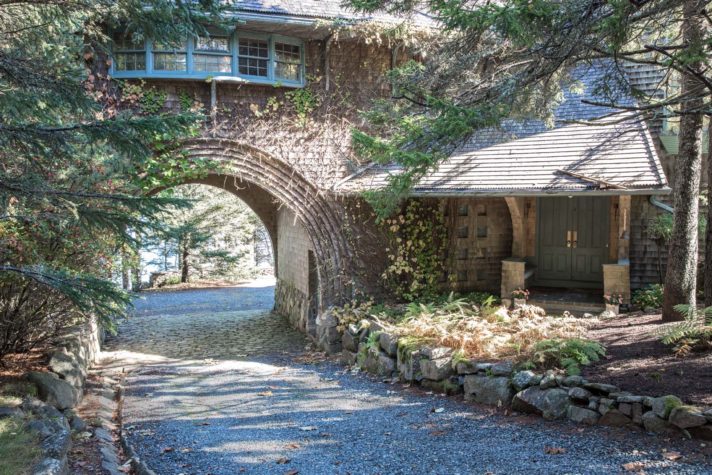 A Richardsonian arch, named after architect Henry Hobson Richardson, is one of the most distinctive features of Kragsyde. When architect Robert Swain Peabody was designing Black’s house, famed landscaper Frederick Law Olmsted suggested adding the arch to provide a place for carriages to unload. 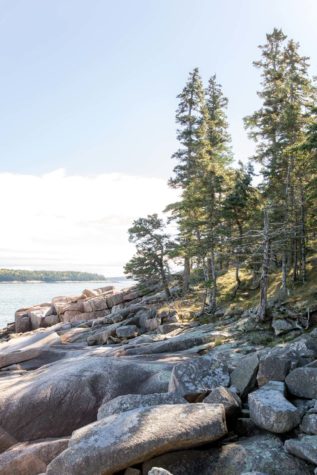 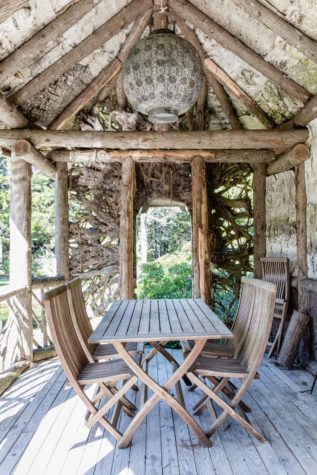 The teahouse, located on a pond just steps away from the main house, features birch bark wallpaper, cedar beams, and a Japanese lantern. 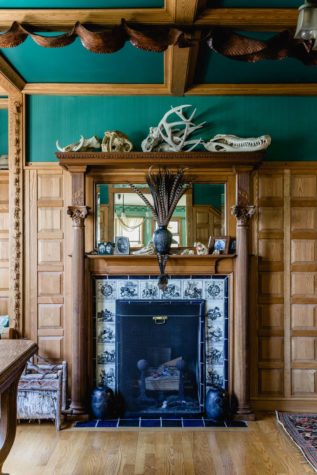 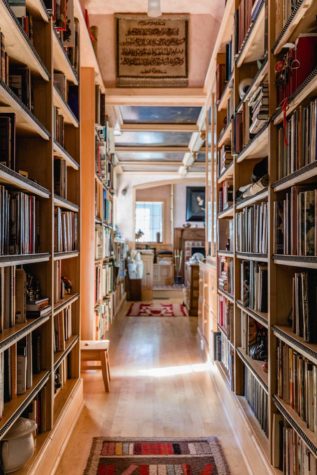 At home with Jane Goodrich, the author of The House at Lobster Cove and the creator of her very own shingle-style marvel on Swans Island

The house came first. Then, seeping from its sea-spray-weathered walls and dripping from graceful rooflines, came the inklings of an idea, a niggling desire to write. Then came George Nixon Black, striding into Jane Goodrich’s mind, a smartly dressed character of bear-like proportions who was half ghost, half man. The book came last. Ushered in by Black, The House at Lobster Cove is a thoughtful and meticulously researched historical fiction novel from a first-time author, longtime artist, and lifelong creator. The book is now on its third printing, and has been praised by critics and readers alike.

But still, the house came first.

Goodrich began building her Swans Island home in the early 1980s. She was just 19 years old, and she had just lived through the recession of the ’70s. “It was a time when things were made cheaply, cars were made poorly. It was the era of Formica and linoleum,” she says. “It seemed like everything was devolving, that people were forgetting that you could live as a craftsperson.” But Goodrich hadn’t forgotten. She had dreamed of owning a shingle-style house for years, and among the houses she had seen in books there was one in particular that caught her fancy. Its name was Kragsyde. It was designed by the architecture firm Peabody and Stearns and built for New England philanthropist George Nixon Black in the 1880s at Manchester-by- the-Sea in Massachusetts. The design drew upon the style of the Victorian era, with a stately curved archway, octagonal towers, long open porches, and many windows tucked under gables that peered out at the ocean like eyes. But when Goodrich began researching Kragsyde, she was shocked to learn that this iconic piece of American architecture had been torn down decades before. Enamored with the style and discouraged by the trends in consumer goods, Goodrich and her husband, Jim Beyor, decided to recreate Kragsyde.

The young couple purchased a two-acre piece of land on Swans Island in 1979 and set about creating their dream house. They used pictures and drawings of the original Kragsyde to figure out the layout. For the most part, they used the same materials found in the original—with a few slight upgrades. “One of the only differences between our house and the original is that we used some dimensional lumber,” Goodrich says. “They wouldn’t have had that back then.” (Dimensional lumber is wood that has been cut to standardized width and depth, such as two-by-fours.) Inside, they installed raised oak paneling and oak floors. Goodrich painted on the walls, decorating rooms with arts and crafts motifs that would have felt familiar to Black (or as she calls him, Nixon). “He would know the house,” she says. (As we talk, I look around the salmon-pink living room, taking in the details: an authentic polar bear rug, a white marble fireplace, a decorative fire screen that shields two iron gargoyles from view, and a wreath of feathers affixed to the wall behind Goodrich.) “I think he might have painted some of the surfaces that we decided to leave as natural wood,” she continues. “And I know exactly what kind of furniture he had: fine, Colonial-era pieces. I’m not so fond of that.” She did furnish her house with antiques (many of which were sourced at the Brimfield Antique Flea Market in Brimfield, Massachusetts), but she favors the organic flourishes and adornment of the Arts and Crafts movement, which, as Goodrich points out, would have looked right at home in a late-1800s summerhouse like Kragsyde.

Through my conversation with Goodrich, I come to realize that the house and the novel are so deeply intertwined that we can’t discuss one without talking about the other. They are both entirely Goodrich’s creations, but her work owes an enormous debt to Black. She describes the process of investigating his life in terms that seem almost mystical. “As you start to see spaces grow, as you build the house, you start to gain new perspectives,” she says. “Suddenly, as you’re building, there are windows. There are apertures to things you haven’t seen before, and you start to think—what did the people who lived here before think? What did they perceive?” The house, in Goodrich’s telling, opened a door to the past where she found her hero.

“Once we were done with the house, which took all my nights and weekends for 20 years, I started to do more research on Nixon,” she remembers. “I realized how interesting he was. For ten years, I kept fearing that I would find something about him that was nasty or cruel, and I never did.” The Black she discovered was a gay man living in an era where coming out wasn’t even a concept. But Goodrich believes that Black’s sexual orientation was an open secret. In his will, Goodrich found further evidence of both his goodness (he gave liberally to his former servants and to charitable causes) and his gayness (he left a large amount to his longtime companion, Charles Brooks Pitman, with whom he lived happily for 34 years). She tracked down Black’s letters and documents, and with the same determination that allowed her to build that grand house, shingle by shingle, brick by brick, Goodrich reconstructed the story of George Nixon Black.

While the ink has dried on the novel and Goodrich has, for the most part, put Black’s spirit to rest, the house isn’t finished, because houses never are. Shingle-style homes require constant care. (On the garage, I glimpse newly patched shingles, raw and unweathered.) “In many ways, I feel as though I don’t live in the modern world,” Goodrich says. “Living on an island, you have to be self-sufficient. We repair everything ourselves. If the furnace goes, we fix the furnace. If something leaks, we fix it ourselves.” When she’s not working on the house, she splits her time between Saturn Press, the letterpress company she founded in January 1986 (also located on Swans Island) and writing in her home office. “I know what I want my next book to be about,” she says. “But it’s still in the research stages.”

While every room in Goodrich’s Kragsyde has its own appeal, I fall a little in love with her office. On the ceiling, she has painted the constellations—a furry great bear, a scaly dragon, a muscular Hercules. They are arranged exactly as they would have appeared on the night of July 11, 1842 (Black’s birthday), if you were viewing them from the North Pole. On her desk, she has piles of books, a vintage green banker’s lamp, and a phrenology skull. Here is where she wrote, by hand, The House at Lobster Cove. “If you’ve built your own space, it’s a little like living inside a giant piece of art that you made,” she says. “Remember when you were little and you would make your own fort? That’s the same feeling.” Goodrich, surrounded by her paintings, her pens, and her words, has created something larger than the sum of its parts: she’s made her own universe, complete with a night’s sky worth of glittering stars. 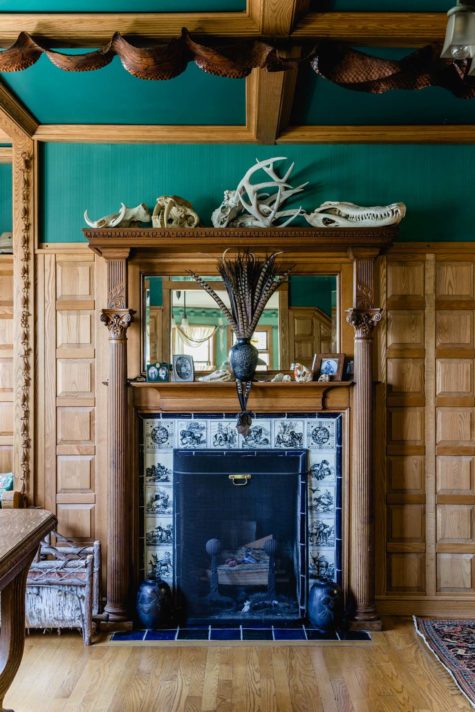 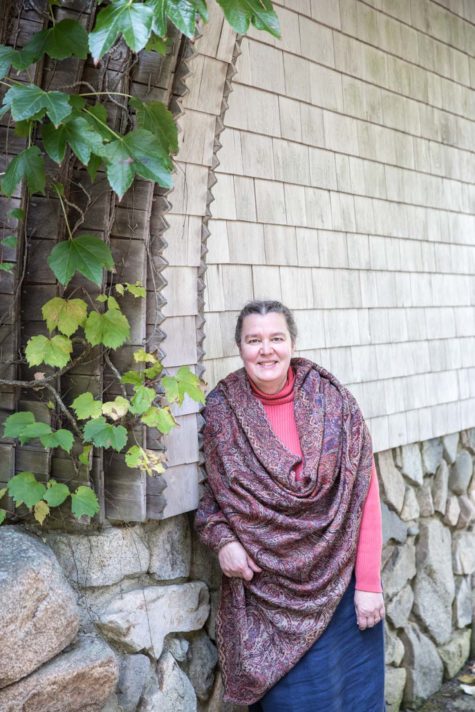 The author at home. 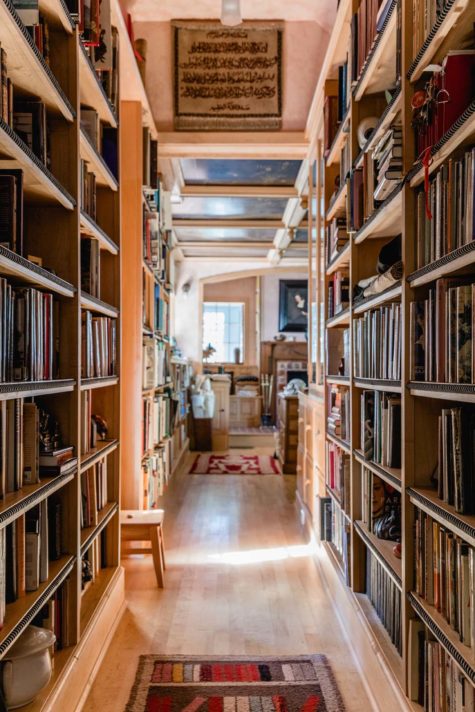