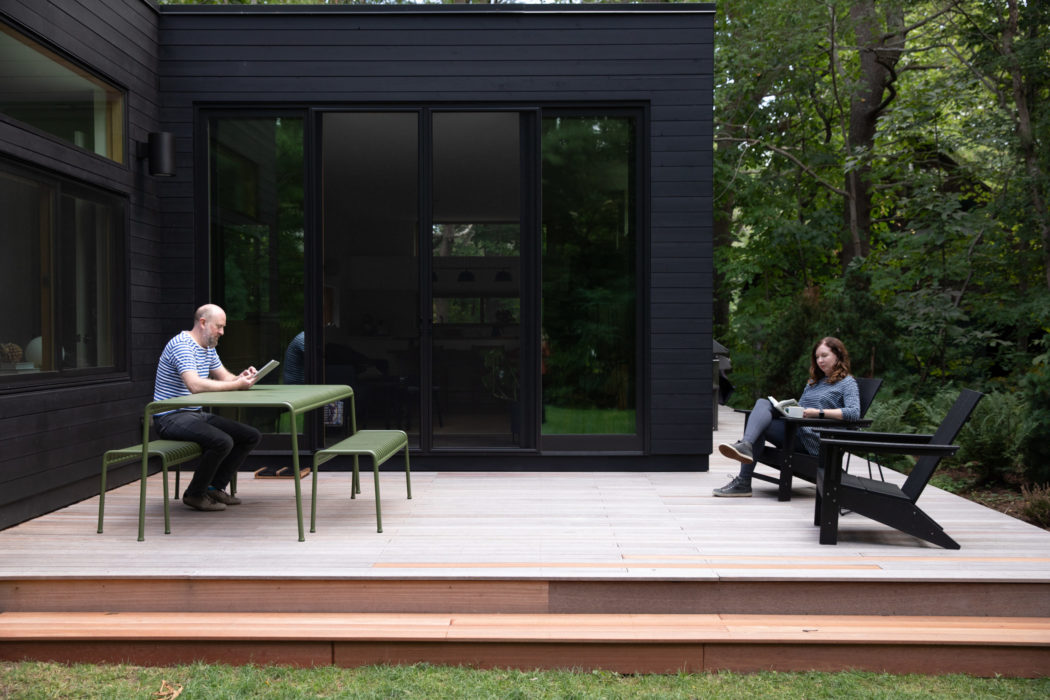 At the Cape Neddick property they purchased in 2015, Adam Yothers and Traci Roloff sit on the deck of the Bracy Cottage. The couple wanted a black exterior after learning about an acient Japanese technique called shou sui ban, where cedar siding is charred until it becomes a blackened, crisp layer. Because the process is irreversible, Adam and Traci opted for a black stain. 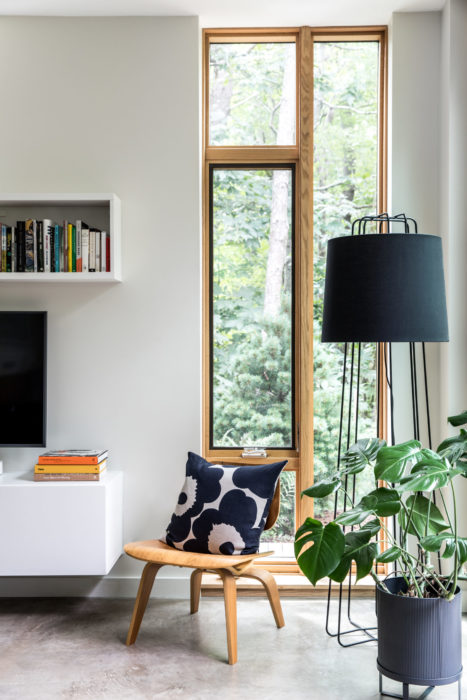 The interior is minimal with Scandinavian influence. 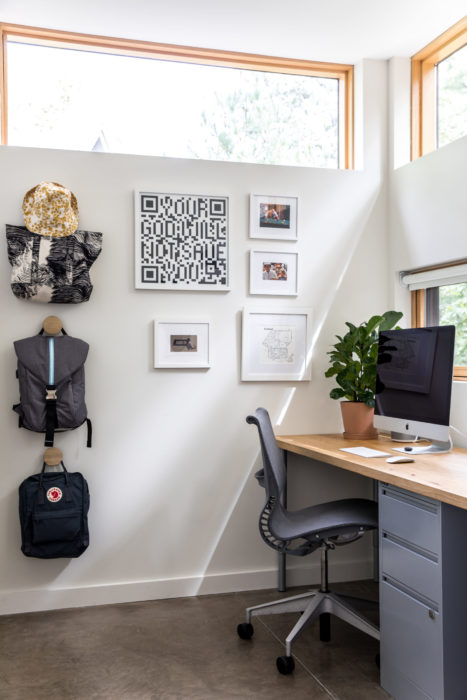 The office nook is just big enough to accommodate two people. “When we’re on a Zoom call it can be a little challenging, but it’s worked out really well,” says Roloff. 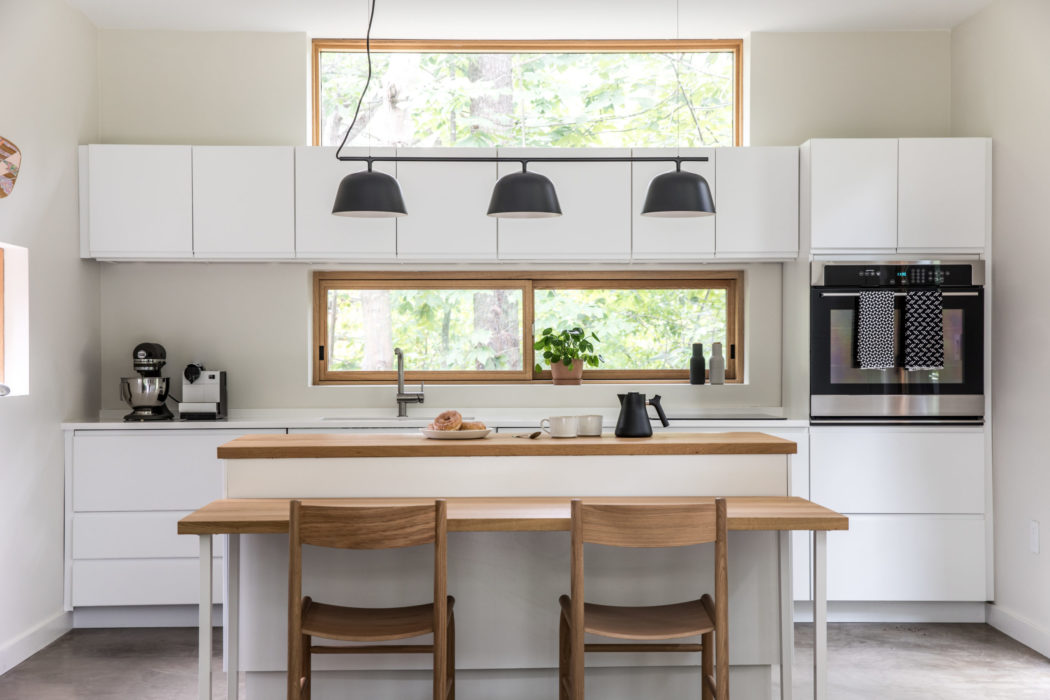 When it came to the kitchen, the couple had to compromise. Yothers really wanted an island and Roloff really wanted a dining room table for entertaining. Yothers disguised a sit/stand desk and placed cabinets on casters beneath it. When the couple wants to entertain, the cabinets can be rolled away and the island lowered for added dining space. 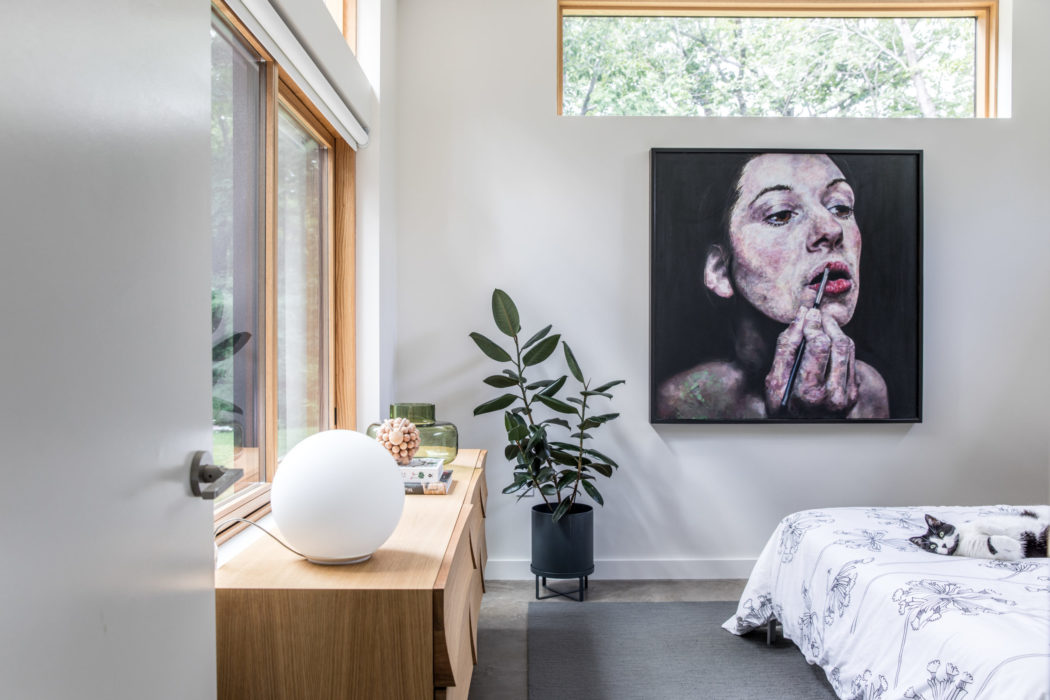 Clerestory windows placed throughout the home help to bring the outside in. “We can see the moon when we’re laying in bed, which is an experience I’ve never had before,” says Roloff. 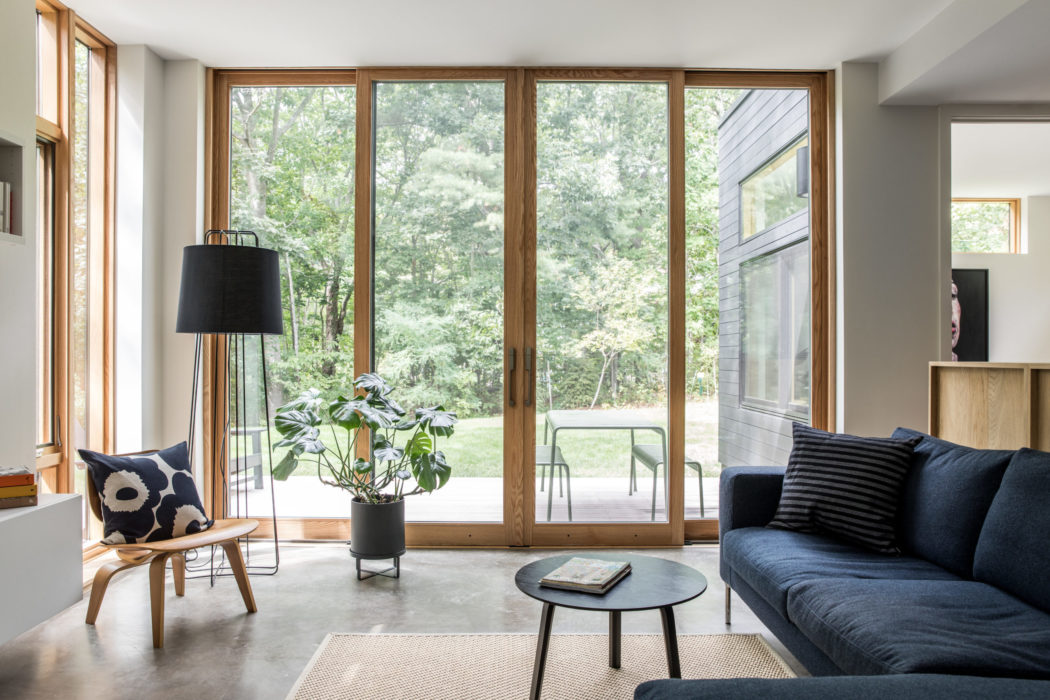 A 9 by 13-foot glass wall opens to the backyard and provides an instant sense of serenity. 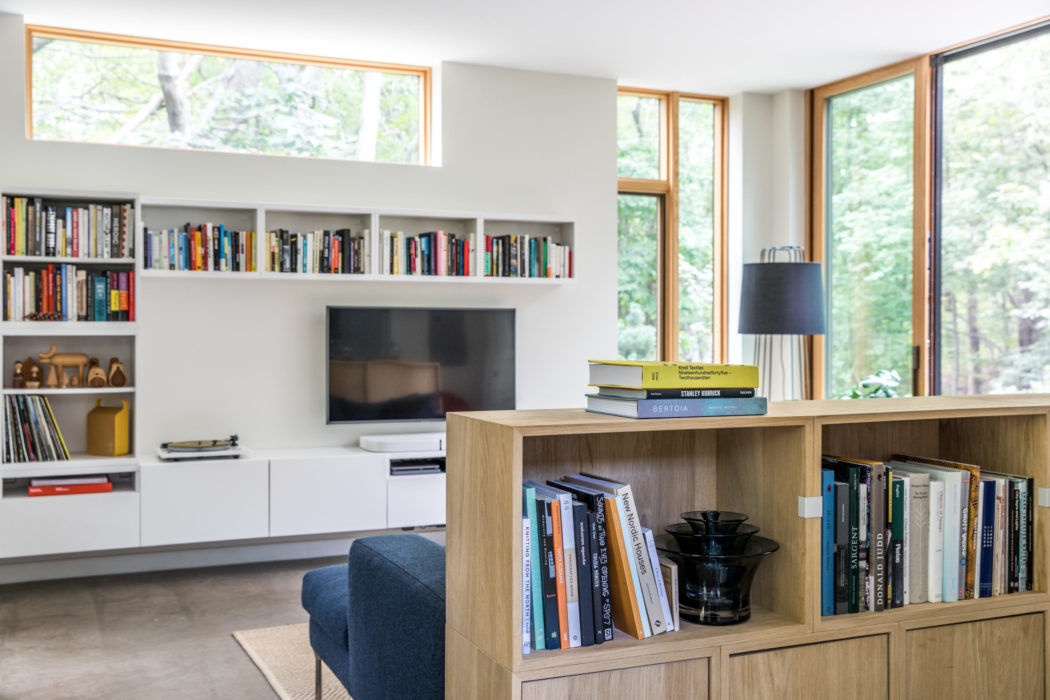 An architect and a felt company founder revitalize a rundown property in Cape Neddick.

One weekend in 2015, Traci Roloff and Adam Yothers were visiting a friend in Maine when, at their friend’s suggestion, they stopped to look at a house in Cape Neddick. The rundown nineteenth-century building had been split into two units and expanded through a series of additions over the years, and a dilapidated 400-square-foot cottage sat out back. Roloff, who cofounded a felt company and has a background in historic preservation and interior design, and Yothers, who is an architect, were up for the challenge. “[The cottage had] no foundation—it was a shack,” says Yothers. But it was a legal third unit. So, the pair purchased the property with the intention of turning the main house into an Airbnb rental and the cottage into a weekend getaway or additional rental space.

For seven months, while they were living in Boston, Roloff and Yothers transformed the house into a clean, contemporary space while preserving the historic exterior and interior patchwork wood floors. As Roloff researched the home’s history, she discovered that it had been built in 1890 by Horace H. Bracy for his wife, Sarah. The family lived there for decades, raising their two daughters and their son, Horace G. Bracy, who stayed in the house until his death in 2014. After his passing, the younger Horace’s family sold the home, and Roloff and Yothers honored the family’s memory by calling it the Bracy House.

Renovations to the Bracy House were completed in July 2016, and the couple turned their attention to the small cottage out back. It had been unoccupied for years, and extensive water damage had left the building completely unsalvageable. Yothers got to work on the new Bracy Cottage, designing a 750-square-foot structure that looks like a square with two halves slid slightly past one another. Since the cottage sits a mere 40 feet away from the house, Yothers carefully considered the placement of each and every window. He used 3D computer software to study the sight lines and ensure privacy between the buildings.

In late 2018 construction of the cottage had been underway for two months when plans suddenly changed. A sprinkler pipe in the couple’s Boston condo burst and destroyed their home. They decided that the Bracy Cottage would be their new residence, and they moved into a temporary apartment in downtown Boston while construction pressed on. Thanks to Berwick-based New Creation Custom Building, the Bracy Cottage was ready for its new inha w finishing touches) in ten months.

Now, more than a year and a half into living in the cottage, Roloff and Yothers are settled into their home and thrilled with the outcome. The interior, which Roloff played a large part in designing, is warm and inviting. Clerestory windows frame the treetops to bring the outside in, and a 9 by 13-foot glass wall opens to a deck facing the woods in the back of the property, which has been invaluable during the pandemic. “It’s so nice to be able to step outside on the deck and look into the woods and just get a moment of reflection and calm,” Yothers says.

The couple feels lucky to be where they are today, and that they could play such a significant part in the property’s history. “Our neighbors saw that we were renovating it, and they were shocked,” Yothers says. The main house was in such a state of deterioration that the neighbors were certain the next owners were going to tear it down. “It needed a ton of work, but it was the right thing to do,” Yothers says. “Once you tear these things down, they’re gone.” Now, the Bracy ge have life in them for decades to come.