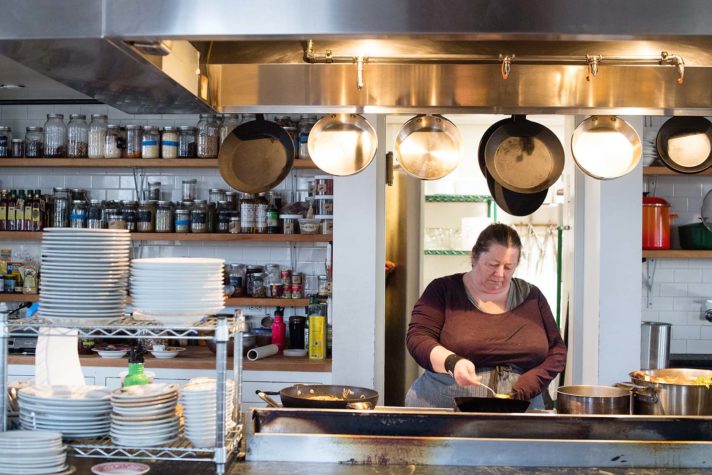 The open kitchen is the heart of the restaurant, where Jenkins cooks authentic Italian food, including many of the dishes she grew up with. 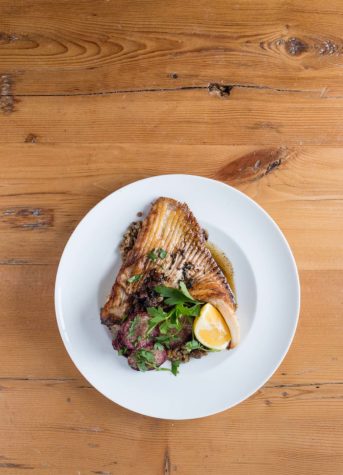 A skate wing sautéed with butter, lemon, and capers. 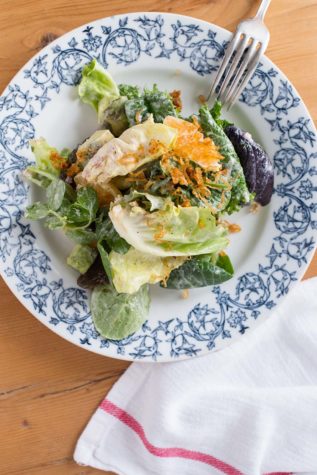 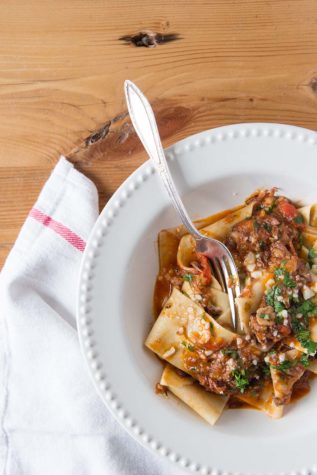 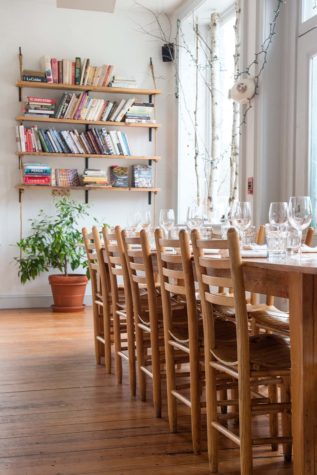 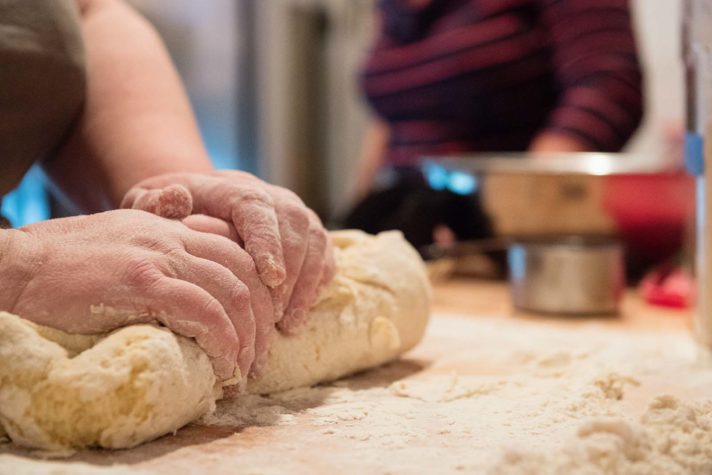 Sara Jenkins has been making pasta since she was a child, a skill taught to her by a neighbor in Tuscany.

Today, like most days, Sara Jenkins is kneading pasta dough in the kitchen of her Rockport restaurant, Nīna June. While she works the dough to a smooth consistency, she tells the story of the wheat harvest in the Tuscan village of Teverina. “It was in early summer, and the men would take the combine from house to house, threshing wheat. The women would spend the whole day making pasta in the kitchen. At the end of the day, there was a big feast at long tables. And, I kid you not, someone would bring out an accordion,” she says, a little misty. Jenkins grew up in that tiny farming community, the daughter of a foreign correspondent and a food writer. The house in Teverina that her parents purchased in 1971 has now become an anchor for Jenkins. She makes every effort to return there at least twice a year, usually for the fall olive harvest. There are 150 olive trees on the property, and the fruit is pressed into a luscious green oil. She learned to make pasta from her next-door neighbor, of which she says with a sigh, “It was the tail end of a way of life.”

Rockport is a long way from Tuscany, but Jenkins has transported the food, and the mood, of her childhood to this charming trattoria overlooking the harbor. She and her son moved to Maine from New York City just two years ago, seeking a better quality of life and to be closer to family, including her mother, cookbook author Nancy Harmon Jenkins. The Jenkins family has a long history in the area, stretching back 13 generations, but Sara had never lived on the midcoast. She did, however, attend high school at Gould Academy in Bethel, her mother’s alma mater. Coming from Rome, she says, was “a tough adjustment.” “You couldn’t even get olive oil here in those days. I had to bring some with me, and I’d use the toaster oven in my room to bake a potato, then mash it up with the oil. Those were the flavors I was missing,” she says. After Gould, Jenkins moved to Providence to study photography at Rhode Island School of Design. But food was still an important part of her life, and she found herself working in kitchens. Even her senior thesis, a photographic essay on slaughterhouses, was related to food.

Her first break came when she worked at Figs, an acclaimed Boston restaurant. Jenkins stepped into the chef role when her friend Barbara Lynch moved on. She next cooked in Italy for four years before she moved to New York. Jenkins swiftly built a reputation at several restaurants there before opening two of her own: Porchetta and Porsena. Porchetta, built on the strength of a fabulous roasted pork sandwich, is now closed. But Porsena, a small pasta-centric place, remains open and extremely popular, with Jenkins overseeing it from afar. “I had the advantage of starting to cook in the United States when people were really interested in authentic Italian food, not Italian-American,” she says. Her style is simple, fresh, and seasonal, as you would find all over Italy in homes, small- town osterias, and city restaurants.

At Nīna June in late December, a farmer from Fine Line Farm in Searsmont arrives with a box of late-season chicories and arugula. Jenkins is able to coax maximum flavor from winter produce, turning ingredients like root vegetables into flavorful dishes. Mesclun, grown in greenhouses this time of year, is the basis for a simple but stellar salad with an herbed crème fraîche dressing. Segmented clementines and avocado are added, and a sprinkle of fried onions completes the dish. While she pulls the salad together, Jenkins talks with the two young cooks on her staff. She gives Darcy Dunn instructions for the squash on tonight’s menu. “Roast it until it’s close to being brown and soft,” Jenkins tells Dunn. “Then we’ll use some of that blue cheese butter.” She then turns to Adam Hahn, talking quietly about the mashed potatoes that will accompany the hanger steak. The two cooks set to work. The chef turns to her own prep duties, rolling out dough for a tarte flambé, then filling it with caramelized onions and crème fraîche. The dish is from the Alsace region of France, so I ask where it fits into the Nīna June menu. “I make food from wherever I find it and wherever I like,” Jenkins says. “Sometimes I make things once; sometimes I make them over and over again.” This winter, Jenkins has instituted Mediterranean Thursdays, an opportunity for her and the staff to stretch their boundaries. They’ve already covered Istanbul and Beirut, and a Night in Tunis is planned. The special event menu includes brik, a Tunisian street food made from a special type of puff pastry that encases an egg, herbs, and spices. “The response to the dinners has been great,” she says. “It’s a chance to bring some ethnic food to the area.” For ideas Jenkins turns to the many cookbooks that are piled on counters and shelves in the dining room.

There are titles from friends, such as Lynch, from Jenkins’s mother, and her own Olives and Oranges, published in 2008. “As a cook, I’m someone who likes reference,” she says. “I use the books for inspiration.” She and her mother collaborated on Four Seasons of Pasta in 2015, a paean to their favorite food.

Jenkins sets to making another batch of pasta dough, but first she needs to find her lucky fork, the one she likes best for mixing the eggs into flour. It’s on a dining table, where just a few minutes ago she had been tasting wine with visiting distributors. Dunn looks on while the chef cracks eggs into a well in the pile of flour, absorbing Jenkins’s words of advice. “Every ingredient will change the quality of the dough,” she says. “You’ll know it’s ready by feel.” This intuition only comes with decades of experience. Most of Jenkins’s dishes are just four or five excellent ingredients, layered simply but thoughtfully. When she puts together a bowl of pappardelle with short-rib ragu for us, it’s from muscle memory. She adds a handful of Parmesan and parsley to the pan, giving it a deft flip with her wrist, and turns the pasta and meat sauce into a bowl. The unmistakable toothy bite of fresh pasta combined with incredibly tender meat makes this dish a favorite with diners, and it remains on the menu year-round. The rich long-simmered flavor reminds me of dishes I’ve had in trattorias all over Italy. Next Jenkins sautés a skate wing using the classic ingredients of butter, lemon, and capers. Skate can be a difficult fish to eat, what with all the cartilage, but the chef ’s preparation yields supremely tender results. It’s served on Umbrian lentils that absorb the buttery goodness and sliced turnips roasted until their sharp flavor has mellowed. Nīna June boasts an open kitchen, so diners can watch Jenkins and her crew work. It’s a joy to sit at one of the counter seats that surround the work space and watch the ease and grace of their skills. As an order comes in, Dunn expertly prepares a bowl of risotto with dried porcinis and fresh oyster mushrooms. The rice is cooked well, with a firm but not hard bite, and the flavor is deeply earthy and savory.

Jenkins is the rare chef who curates her own wine list. “I know my food better than anyone,” she says. “More chefs should do their own list. It’s as personal as the food.” She’s also worked at a winery in Italy, running its cooking program. Not surprisingly, the list is dominated by Old World varietals, especially heavy with Italian labels. Currently Jenkins’s favorite is La Lastra Canaiolo, an old-fashioned Tuscan wine with fruity notes and some peppery spice, which pairs well with roasted meats. There are French selections as well, mostly in the white wine category. “It’s a killer wine list,” says bartender Page Bradshaw. “It brings people in with its authenticity. It’s also well priced and unique to the midcoast.” Wine is the most popular beverage choice at Nīna June, but Bradshaw gets a lot of orders for classic cocktails, too, especially Manhattans and negronis.

The transition from New York to Maine hasn’t been easy. “I thought there would be more down time,” says Jenkins. “This is so much more consuming than I anticipated.” Figuring out when it will be busy and when business slows down has been a challenge, too. But last summer Bon Appetit magazine named Nīna June one of the Best New Restaurants in America, praising “the fantasy vacationland restaurant where Maine meets the Mediterranean.” That mention has brought more visitors, especially from out of state, who might not have stopped in Rockport otherwise. They’ll come mostly in the summer when the outdoor deck overlooking the working harbor is open. In the winter, it’s mostly locals who come to dine in the rustic, candlelit room. Some have established themselves as regulars, often choosing a seat at the bar. There they can order the grilled cheese sandwich special of the day or one of Jenkins’s more traditionally Italian specialties. With a glass of wine, it’s a cozy dinner. After all the places she’s worked and lived, we’re fortunate Sara Jenkins finally made the decision to come home. 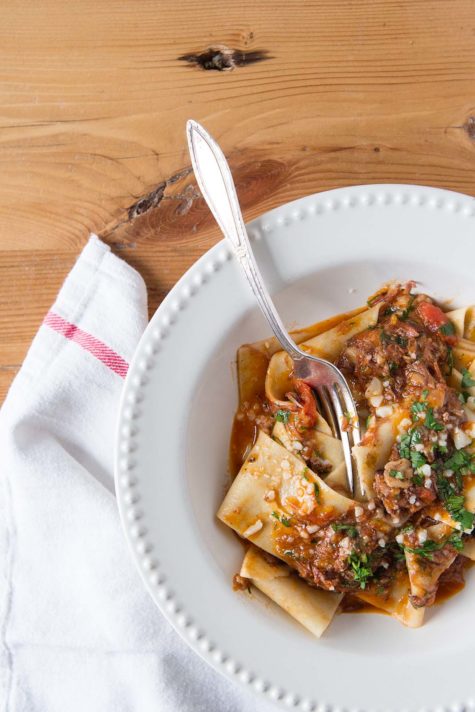 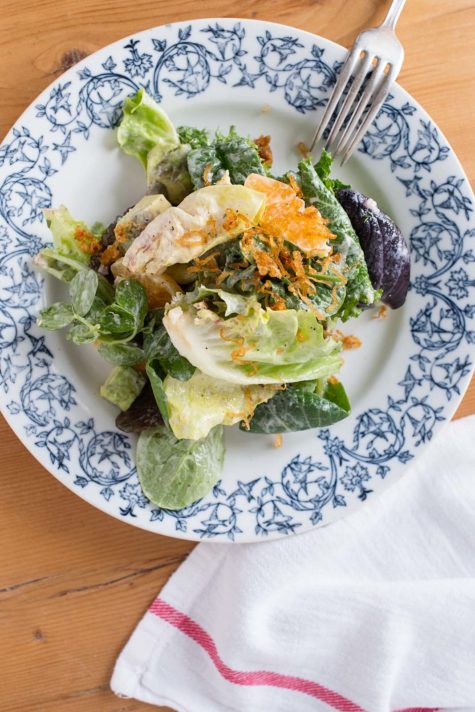 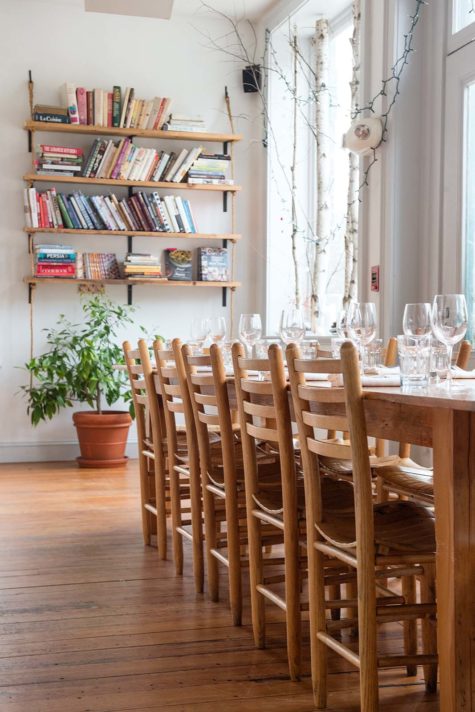