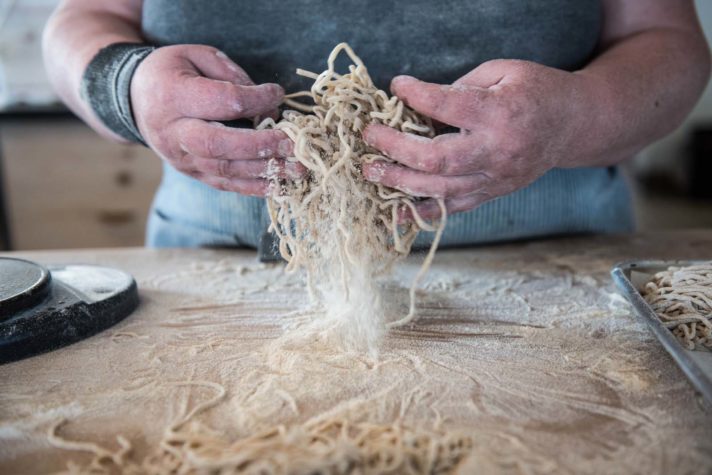 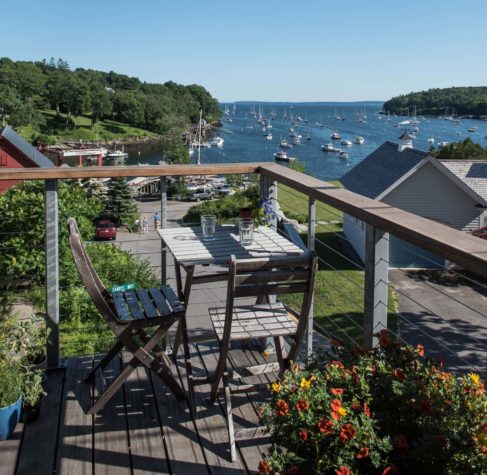 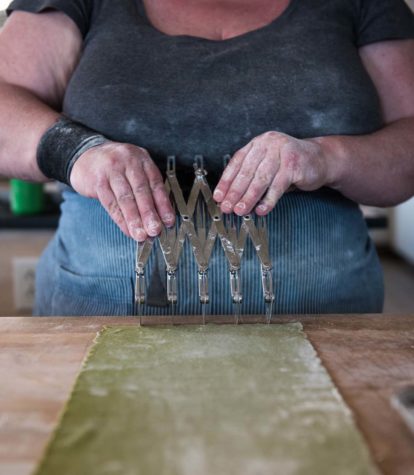 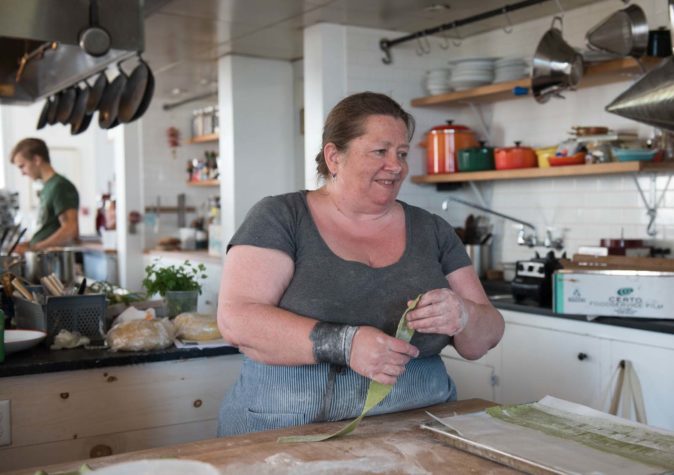 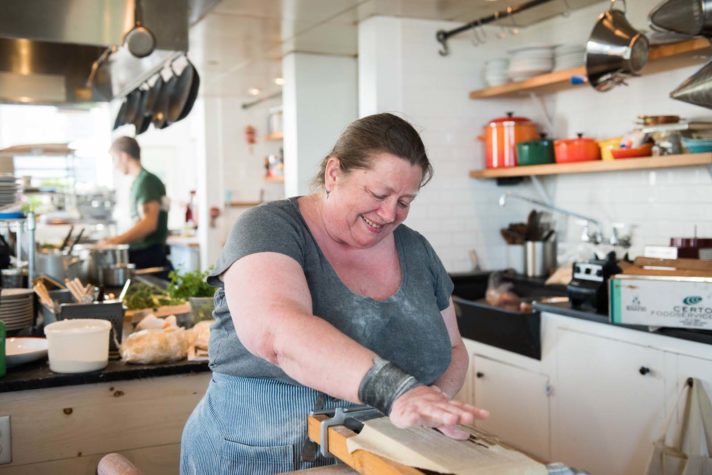 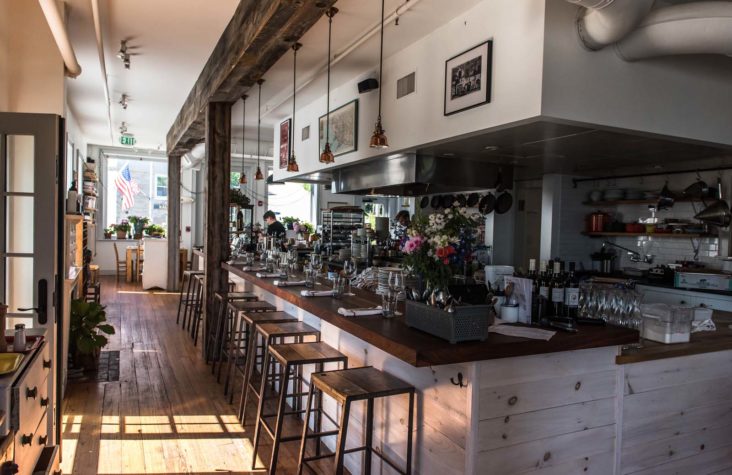 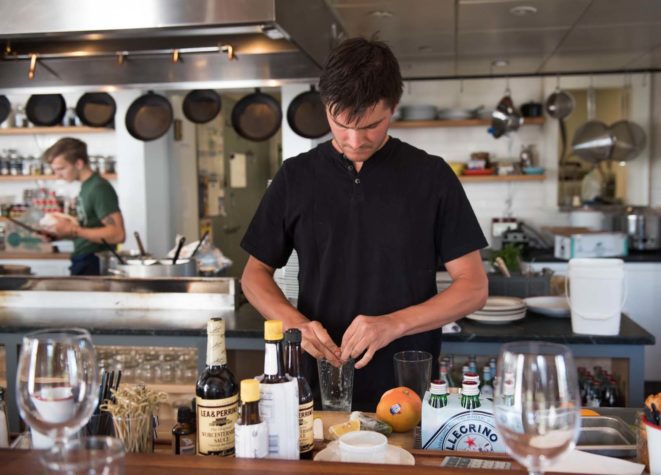 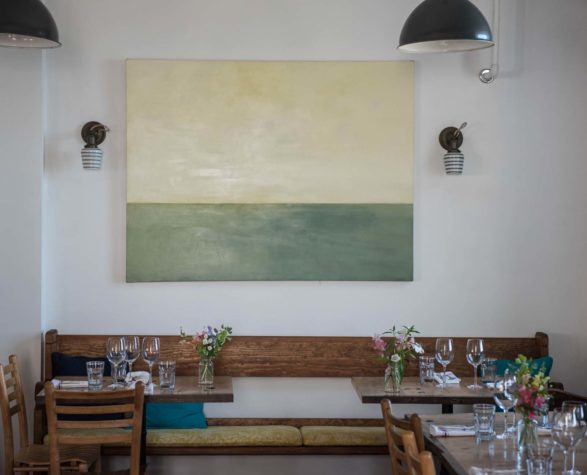 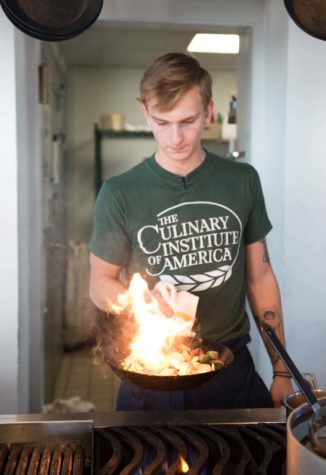 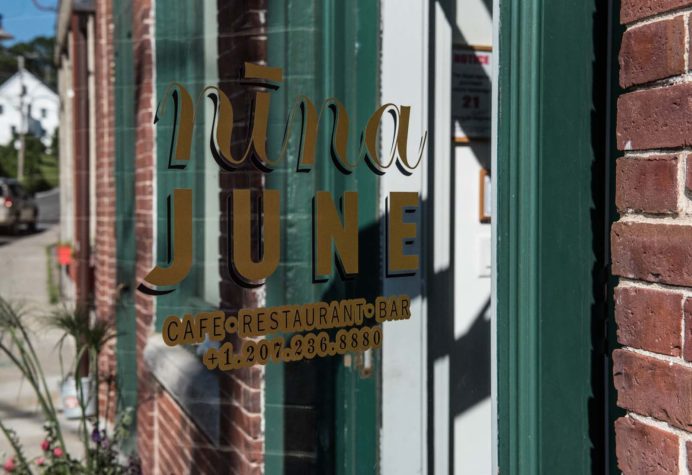 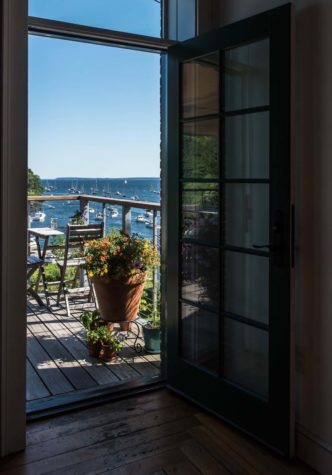 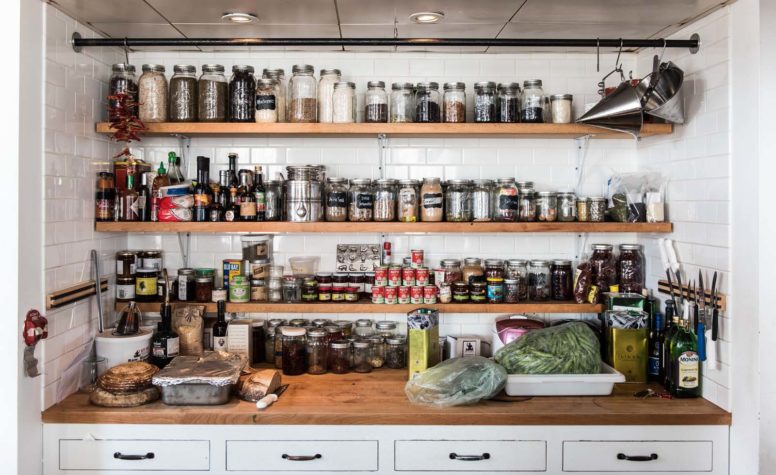 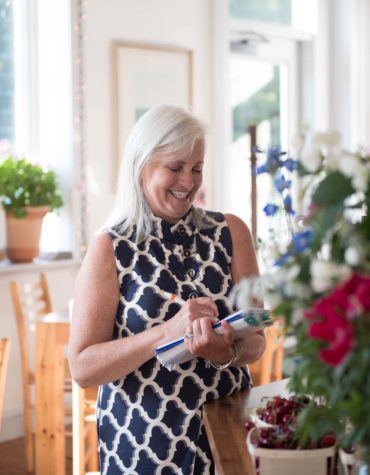 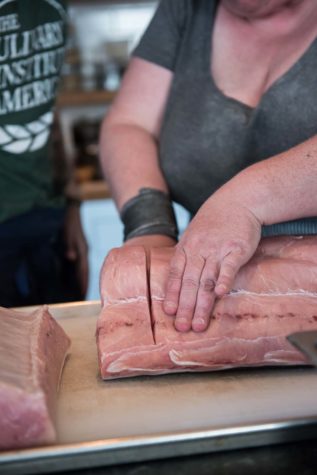 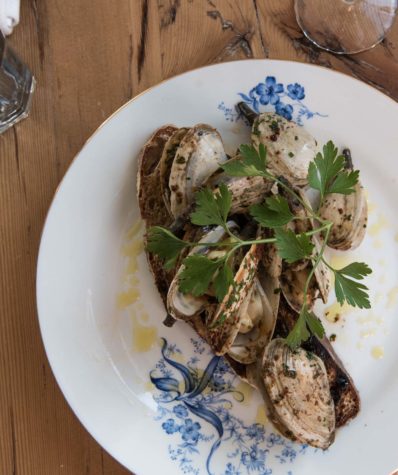 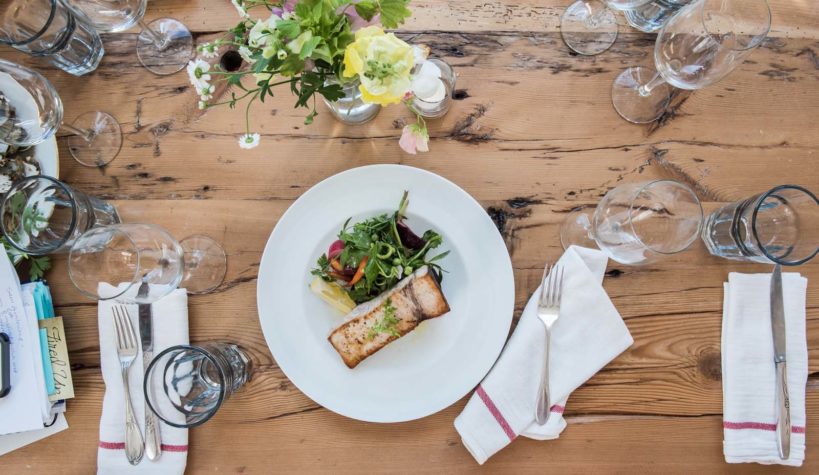 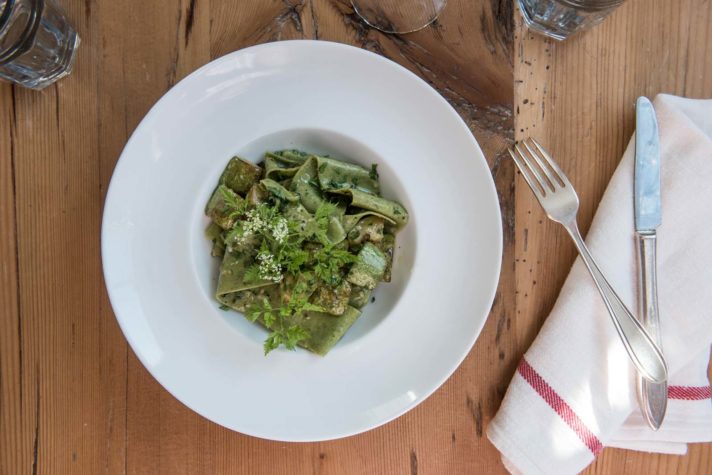 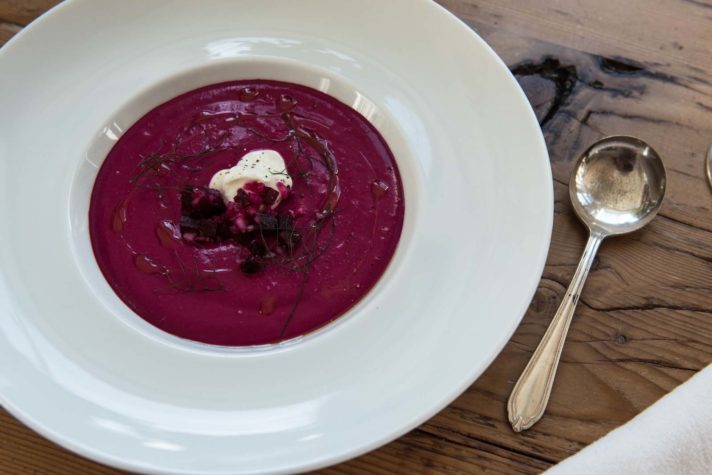 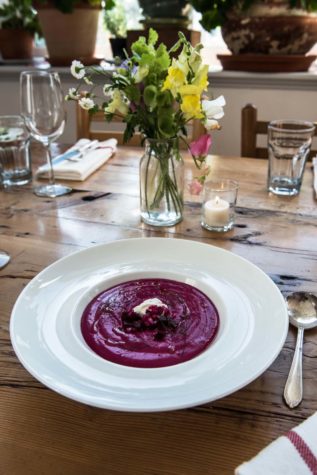 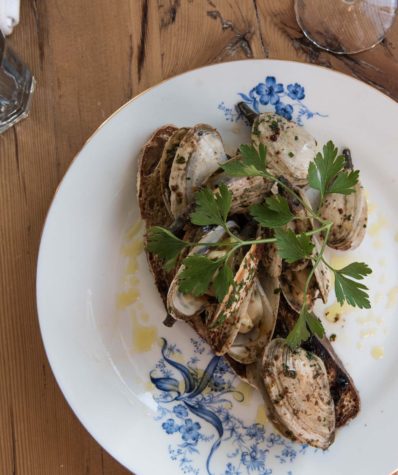 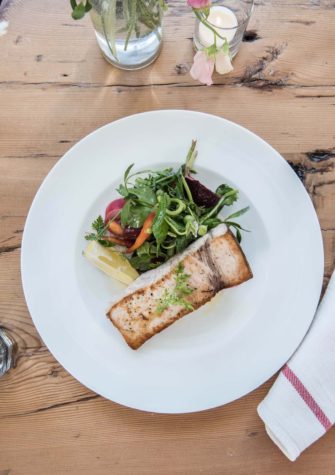 When we arrive at Nina June, chef/owner Sara Jenkins is making one of the three types of pasta that will be served at dinner that night. She feeds green dough through the machine, thinning it with each pass. Each sheet, flavored with chervil, chives, and other herbs, is then hand cut into wide pappardelle noodles. “I’m a big proponent of artisan pasta from Italy,” she tells me while she works. “But it takes too long to cook, so I switched to making it fresh, and it cooks much quicker.” Making pasta daily is practically like breathing for Jenkins, who learned the skill from her neighbor in Tuscany, where her family owns a home. She and her mother, Nancy Harmon Jenkins, have co-authored a wonderful cookbook (one of several she’s written), called The Four Seasons of Pasta. “I like to play around with the dough a little differently each time,” she says. “I might add buckwheat or duck eggs.” The herbed pappardelle will later be prepared with roasted zucchini, garlic scapes, olive oil, and just a bit of Parmesan. Soon she brings out a chitarra, a wooden box strung with thin wires. The sheets of dough become long strands with a push of her rolling pin over the box. It’s a muscle memory for Jenkins, honed through years of practice in Boston, Italy, and New York. Last year she brought her talent to Rockport for a homecoming of sorts.

Jenkins was raised primarily in Rome, where her father worked as a foreign correspondent. But she came back to Maine for high school, attending Gould Academy, her mother’s alma mater. “It took a long time to adjust, especially the food,” she says. “You couldn’t even get olive oil in Bethel. I brought my own and would cook potatoes in the toaster oven in my room, then mash them up with the oil. But I eventually started to think Maine was kind of cool.” She studied photography at Rhode Island School of Design, but often found herself in kitchens because “it was easy to get a job, and it suited my schedule,” she says. Jenkins cooking career took off in Boston and then New York, where she “bounced around a lot,” even earning a starred review for her work from the New York Times, before opening her own restaurants, Porchetta and later Porsena. Both places drew on her Italian childhood and earned her a reputation for authentic Tuscan cooking using fresh, seasonal ingredients. But eventually she grew tired of the freneticism and looked for a better place than New York City to raise her son. “My mother lives in Camden and has been trying to get me to move here for a long time,” she says. “I finally just said, ‘Let’s do it.’” In 2016 she took over the space previously occupied by Salt Water Farm Cafe and opened Nina June, her childhood nickname.

The space remains largely the same—spare and neutral, with rustic wooden beams and tables. Fresh flowers from a nearby farm grace each table, adding a spot of color. The menu changes daily, offering the best of each season from local farms and purveyors. “A lot of them reached out to me when I opened,” Jenkins says. “There’s something about being three minutes from a farmer, who I can just text and ask him to bring me something.” The simple decor works as a foil for the colorful dishes coming from Jenkins’s open kitchen. The pappardelle with zucchini is varied shades of green. A chilled beet soup, made today by cook Sam Gimlewicz, is a vibrant fuchsia and full of summer flavor. Swordfish, fresh off the boat, was simply pan-seared and placed atop a brightly colored tangle of pea greens with roasted beets, radishes, and carrots. While not quite as splashy as some of the other dishes, sautéed steamer clams with garlic, parsley, and chili are piled high on country toast, which soaks up the delicious juices from the shellfish. Jenkins puts together Nina June’s wine list herself, saying, “I’ve come to the conclusion that more chefs should do their own wine list. It’s as personal as the food.” She’s stocked the list with an even balance of Old World favorites that pair well with the menu, including a nice selection of rosés, as well as bottles from France, Austria, and of course, Italy.

With a back door open to a deck that overlooks picturesque Rockport Harbor and a breeze stirring the air, Nina June is a relaxing and happy spot. Jenkins finishes the pasta making and shows a line cook what to do with garlic scapes. “I would not be afraid of olive oil at all,” I hear her say. She instructs Gimlewicz, a recent CIA graduate, how to break down the enormous piece of swordfish. As I’m getting ready to leave, Jenkins is standing at the counter, shelling fresh peas. Nearby are quarts of ruby-red, fresh cherries, and I ask what plans she has for the fruit. “Tomorrow I’ll serve it with salami,” she says. “It’s a big thing in Italy to pair fruit with salty meat. Then we’ll make cherry pie later.” The depth of Jenkins’s love and knowledge of Italian cuisine, combined with Maine ingredients, makes Nina June a unique, and extremely delicious, experience. We’re glad she’s found her way home. 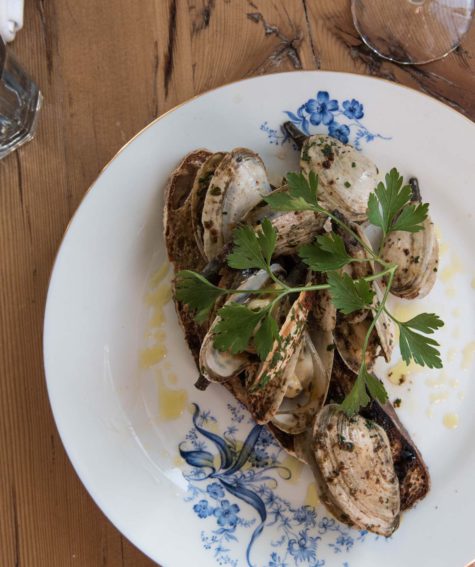 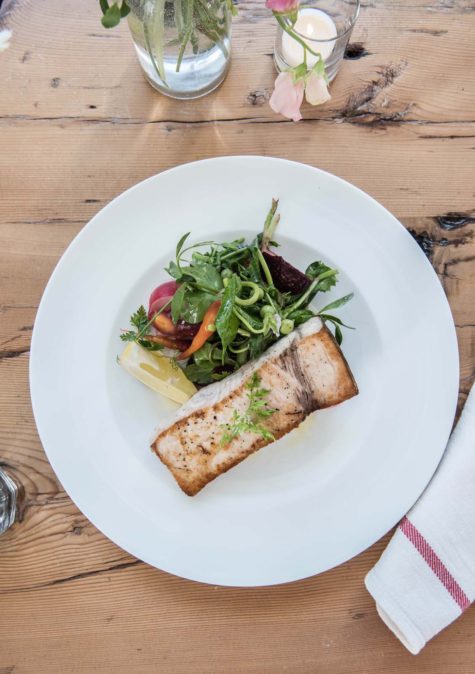