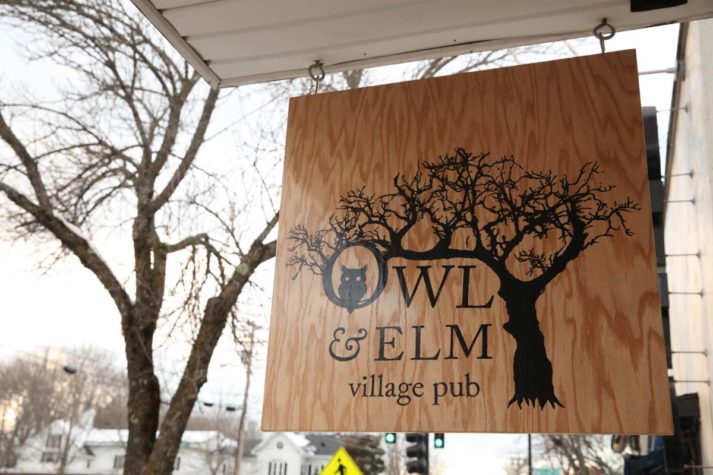 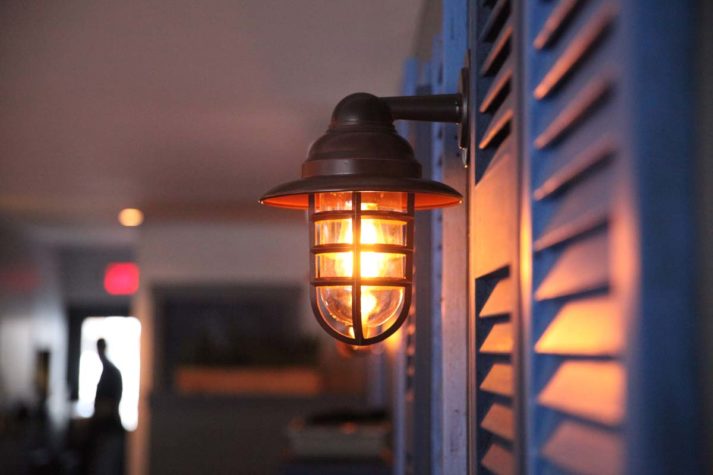 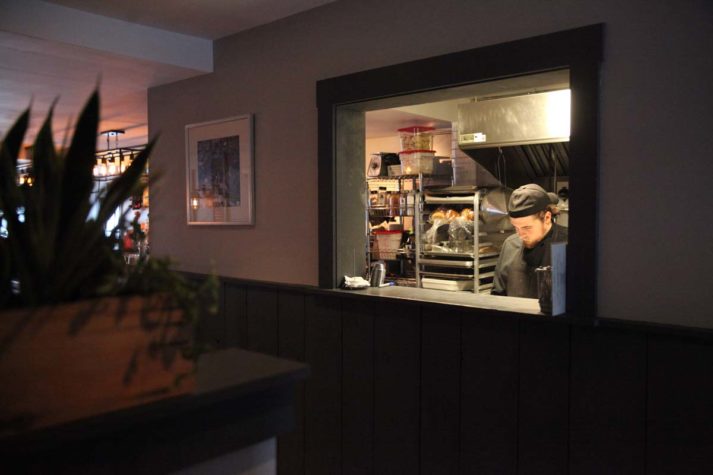 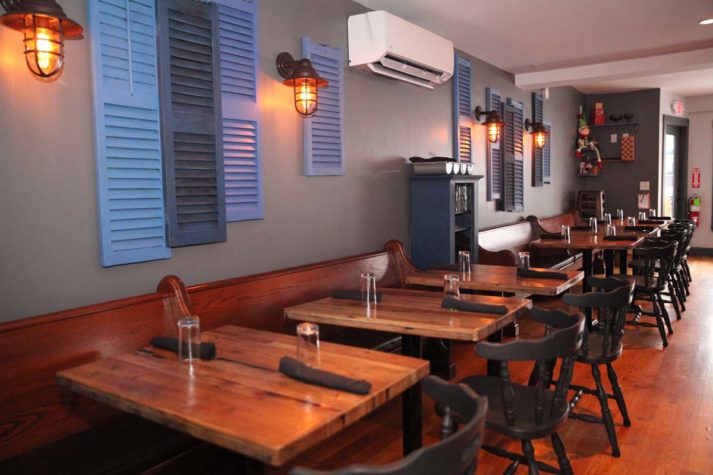 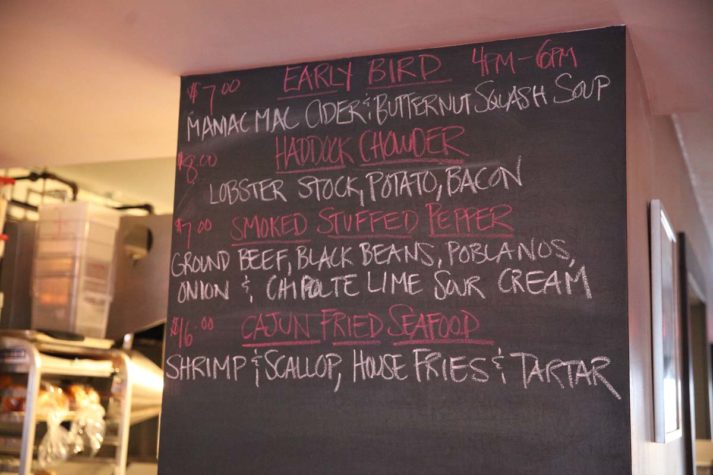 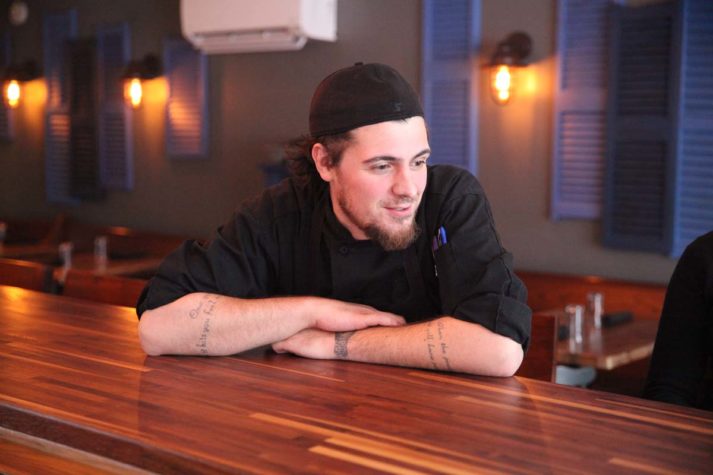 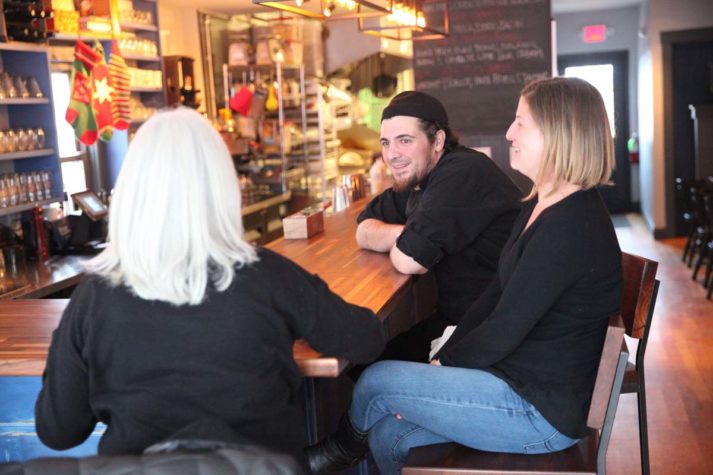 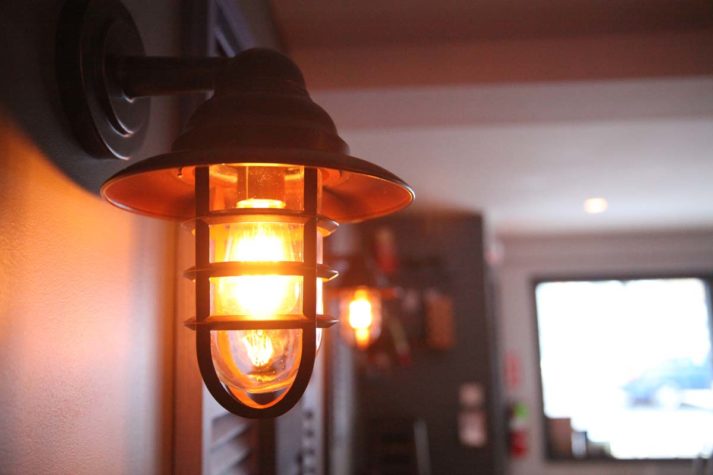 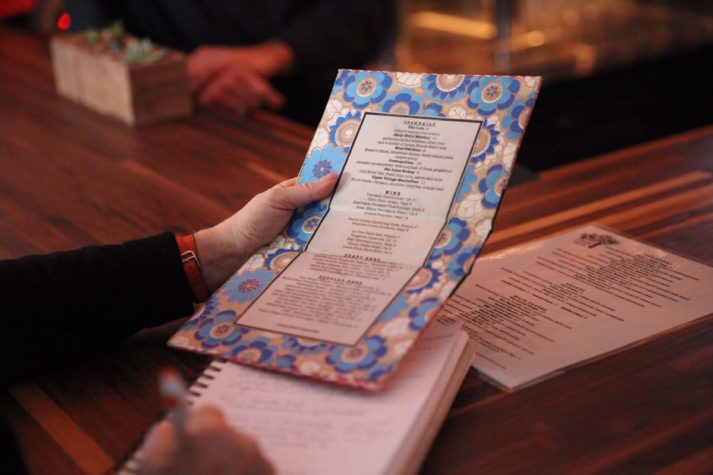 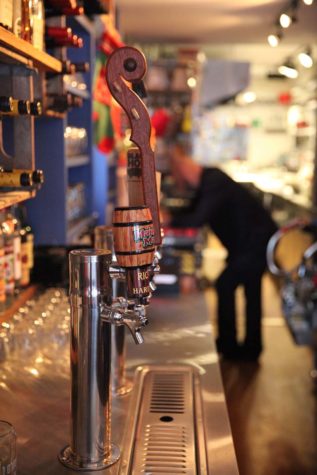 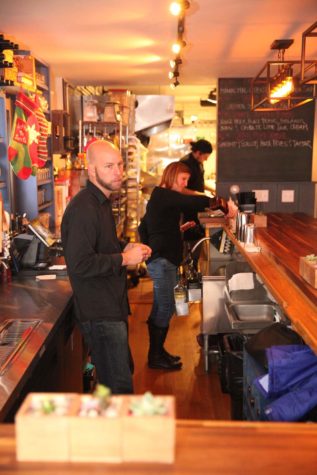 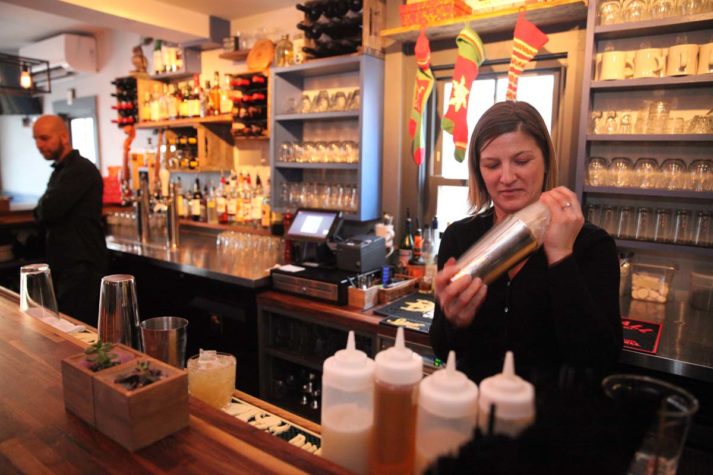 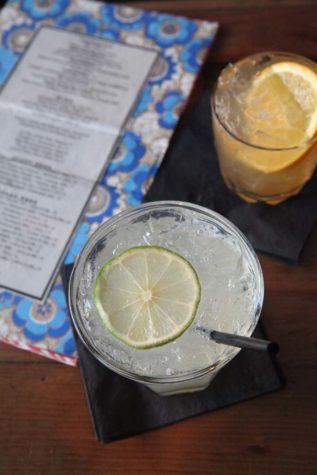 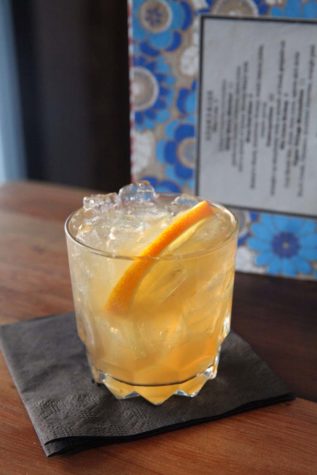 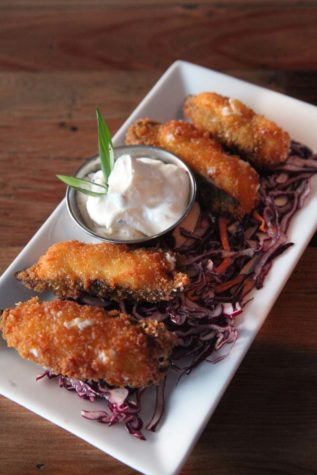 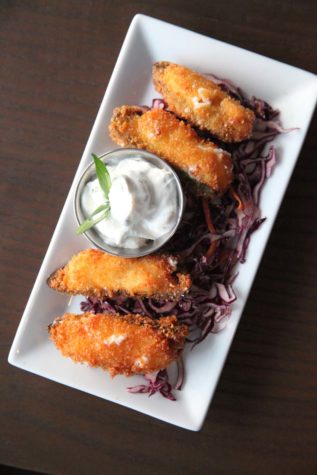 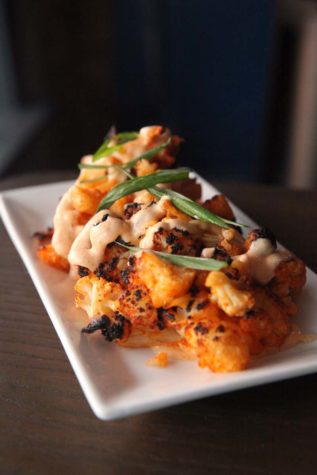 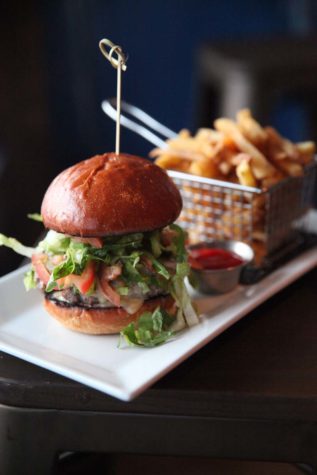 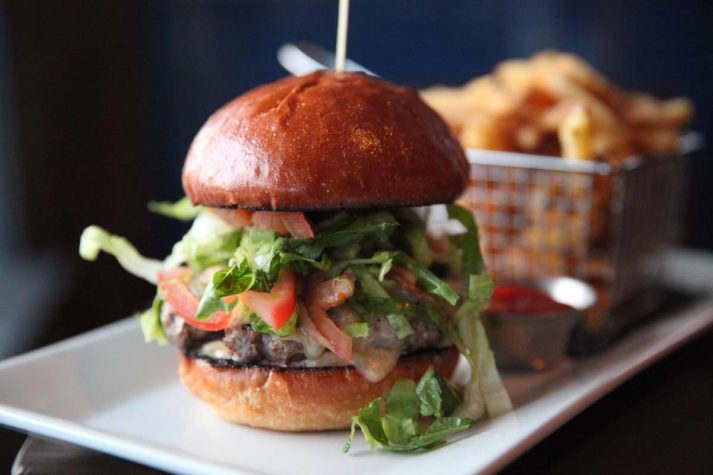 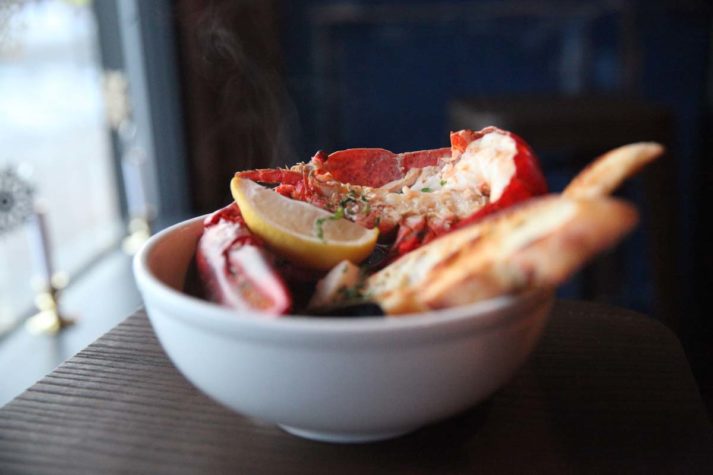 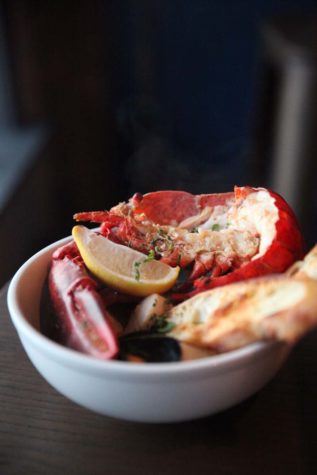 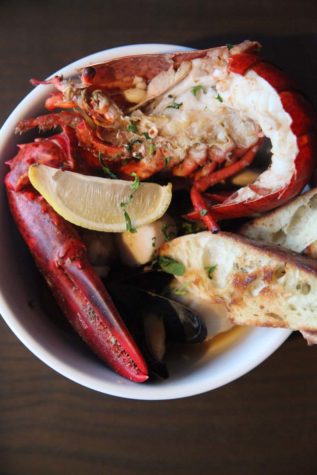 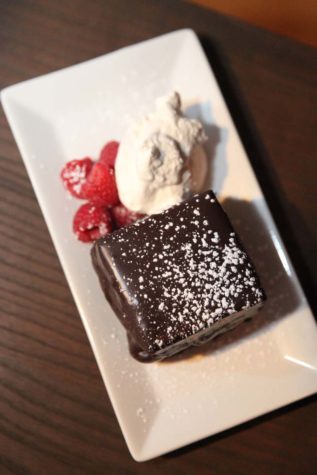 Not long after I wrote an October 2016 Maine magazine story about the dining scene in Yarmouth, the town welcomed another restaurant into the fold. Owl and Elm opened in September in the heart of the village, right next to Handy’s Market. The space had held other businesses, none of them particularly successful. But this time, the building’s developer, Sean Ireland, gave the place a complete, and necessary, makeover. “We always wanted the right small, cozy place,” says Owl and Elm owner Caitlin Henningsen. “We weren’t sure we were ready, but when this became available, we couldn’t pass up the opportunity.” Henningsen, who owns the restaurant with her husband, Keith Johnson, moved to Maine from Connecticut, where they owned a food truck specializing in grilled cheese. “The move to Maine was a long time coming,” says Henningsen, who attended Gould Academy and spent summers on Chebeague Island. “There’s just something about Maine that works for me. And when we saw Yarmouth, that was it. I knew we’d found our home.”

The couple worked with Ireland to give the space the look and feel they had in mind. Walls were painted a deep charcoal hue, aptly called Steel Wool. They’re decorated with bright blue shutters and old church pews for seating along the wall. Henningsen and Johnson designed the handsome, walnut butcher-block bar top. “We wanted it to feel like the kitchen counter where everyone hangs out,” she says. You’ll often find one of them behind that bar, pouring beer from six taps, including local favorites such as Funky Bow Brewery and Beer Company and Maine Beer Company. Cocktails are popular, too, especially the gin rickey. One sip takes me back to the annual Yarmouth Clam Festival, where icy lime rickeys are the most popular beverage, sometimes surreptitiously spiked by volunteers. The Wise Owl Sour is perfect for this time of year, with Maker’s Mark bourbon, Wild Turkey American Honey whiskey, maple syrup, and lemon juice.

Ireland’s idea for a place that served hardy comfort food from scratch was what Henningsen and Johnson had also envisioned. “We all thought it was something the town could use,” Henningsen tells me. “Our vision just clicked with Sean’s.” With that concept in mind, Henningsen and Johnson hired Rocco Marzilli, who also lives in Yarmouth, as the chef. He’s cooked “all over Portland,” but most recently at Nosh Kitchen Bar and Hot Suppa, both providing plenty of experience in the type of food at Owl and Elm. The menu is a group effort, with the owners and Marzilli all contributing their best ideas. Jalapeño poppers were inspired by a grilled cheese sandwich the Johnsons used to make for their truck, with a blend of cream cheese and smoked cheddar stuffed into fresh peppers, lightly fried, and drizzled with honey. The sweetness plays nicely with the heat of the peppers, and the whole thing is an irresistible starter or bar snack. Buffalo cauliflower embellished with a creamy Gorgonzola sauce, introduced by Marzilli, is a menu item that took them all by surprise. “We had no idea it would go over so well,” he says.

“We were all in agreement that we had to have a good burger,” says Henningsen. After much experimentation and tasting, they’ve arrived at a winning formula. The Owl and Elm burger is a beauty, with fresh, ground beef blended with the chef’s own steak sauce. The topping is a delicious, slaw-like combo of lettuce, tomato, house-made pickles, and onion, with smoked cheddar and a swipe of aioli. Served alongside the burger is a small metal basket of French fries, hot, crisp, and freshly cut and cooked. “A really good fry is beyond important for a pub,” Henningsen says. These are beyond “really good”; superb is a more apt description. Other dishes are just as carefully crafted—a generous seafood stew with lobster stock, a hardy chicken pot pie, beautifully cooked scallops, and even a few salads. Marzilli’s right-hand man in the kitchen is sous chef Justin Alper. Bethany Taylor has recently been hired to bake bread and desserts, often using Henningsen’s recipes from a bakeshop she previously owned. The raspberry cake covered in rich chocolate ganache is outstanding. And don’t miss the daily sundae special, each a slightly over-the-top treat.

Owl and Elm has only been open since September, but it’s become already become a hugely popular spot, with its own cast of regulars from Yarmouth and surrounding towns. Plans for the future include weekend brunch and live music. “The welcome we’ve received in Yarmouth has been overwhelming,” says Henningsen. “We’re so happy to be here, and we plan to stay for a very long time.” 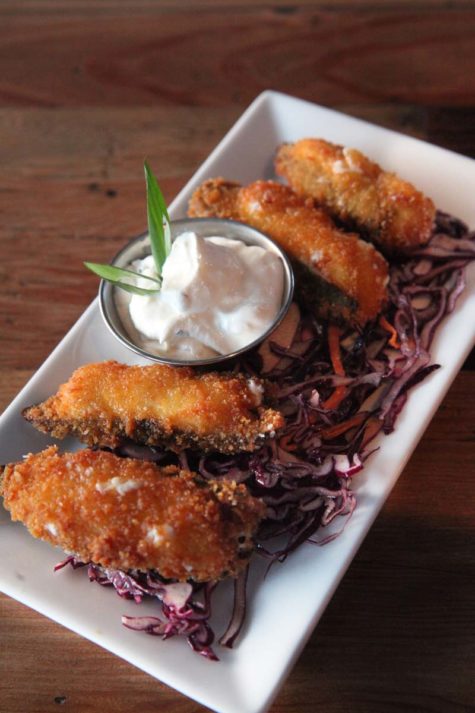 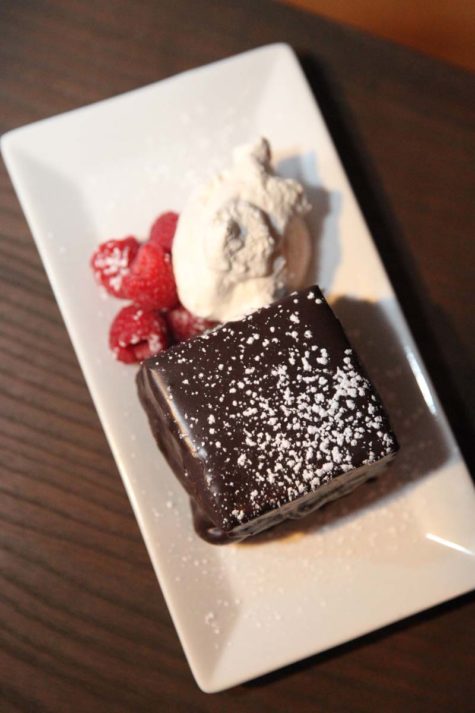