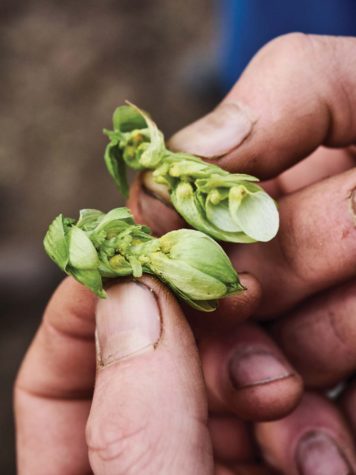 Opening one of the cone-like hops in Alna. 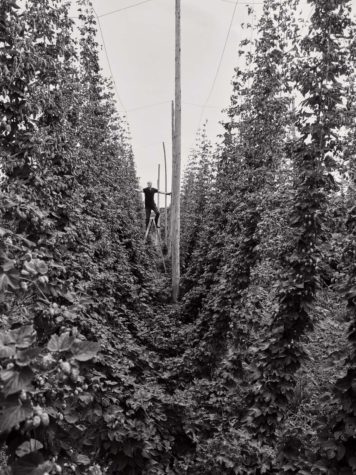 Mike Barker climbs a ladder to inspect the hop plants (Humulus lupulus) that he’s growing at Alna Hopyard and Farm. 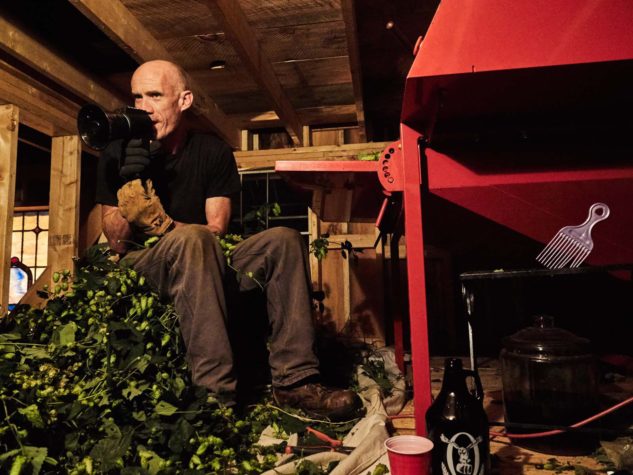 During an all-night harvest last September, Barker feeds the hop plants, one by one, through the noisy machinery. 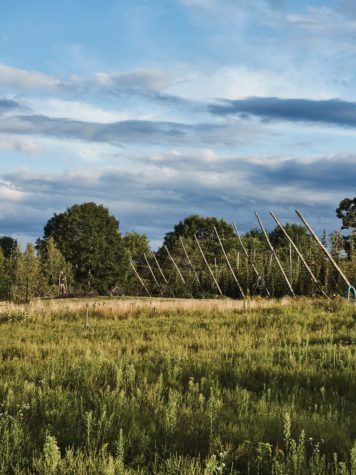 The one-acre-and-growing field of hops. 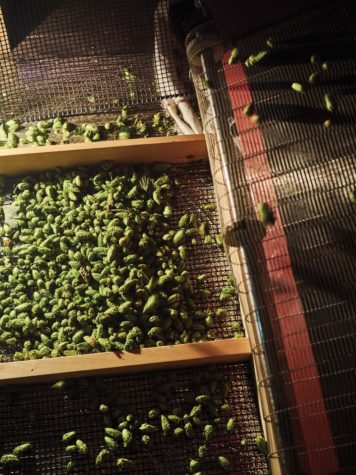 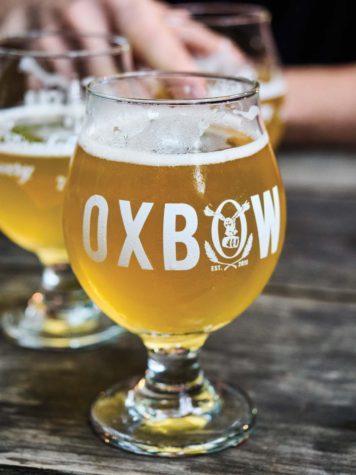 A glass of the “wet-hopped” Harvest saison at Oxbow. 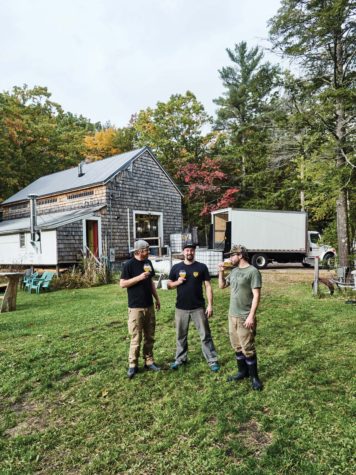 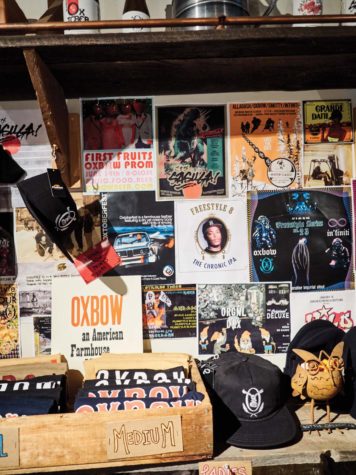 Oxbow’s farm and brewery is in Newcastle. 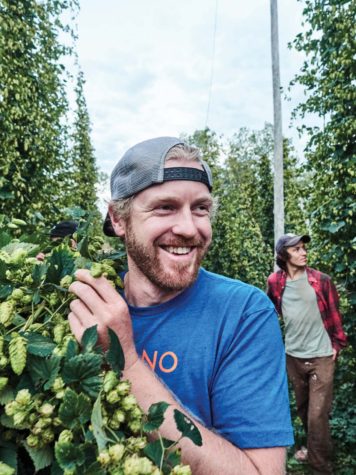 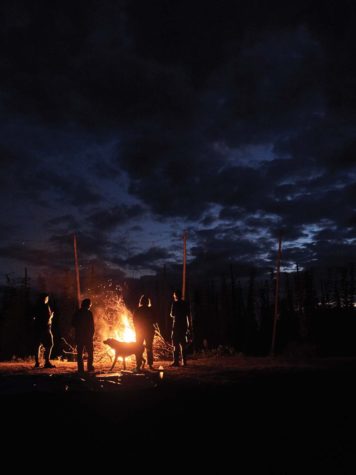 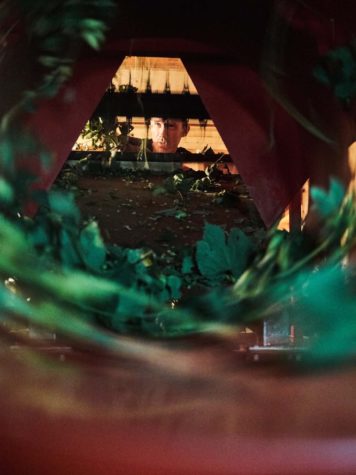 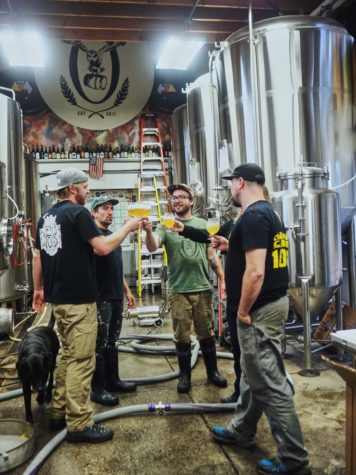 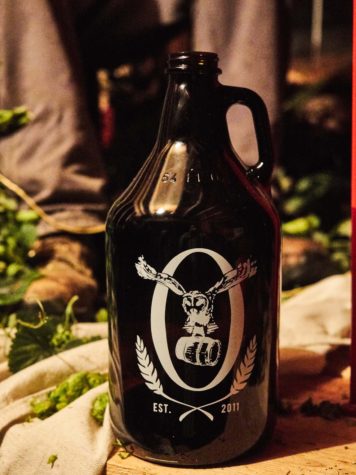 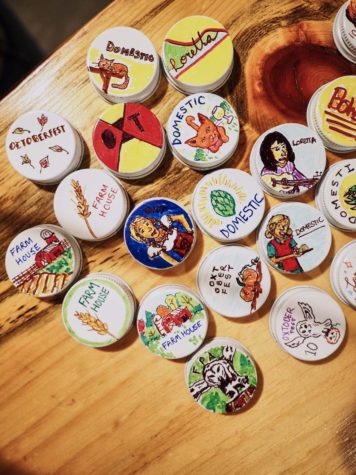 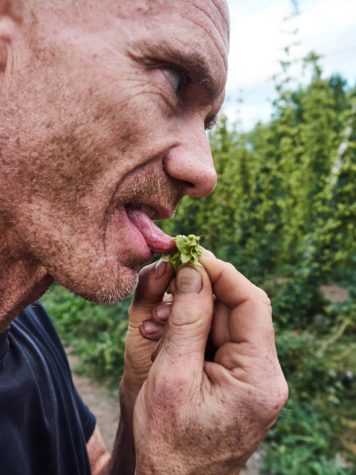 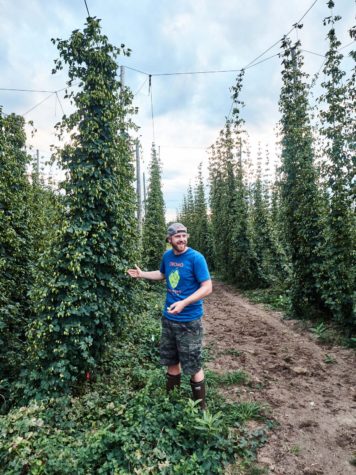 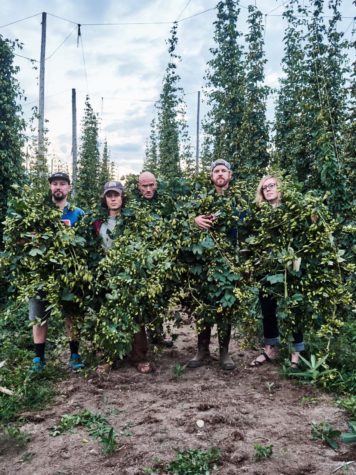 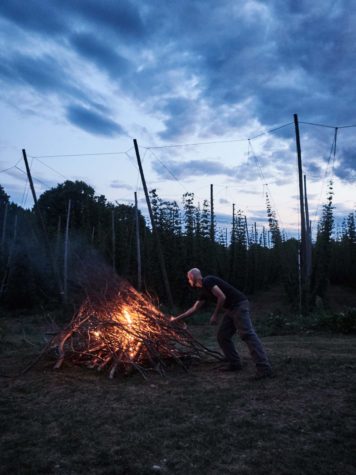 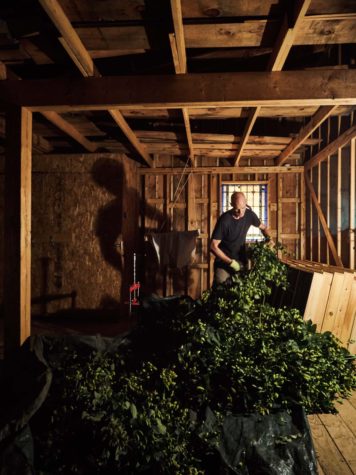 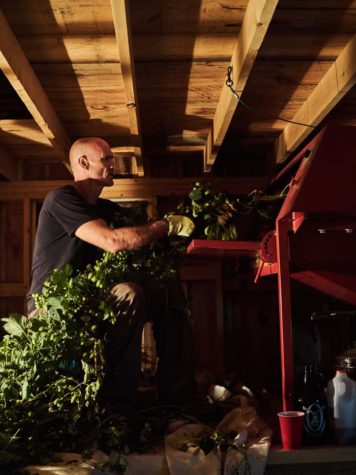 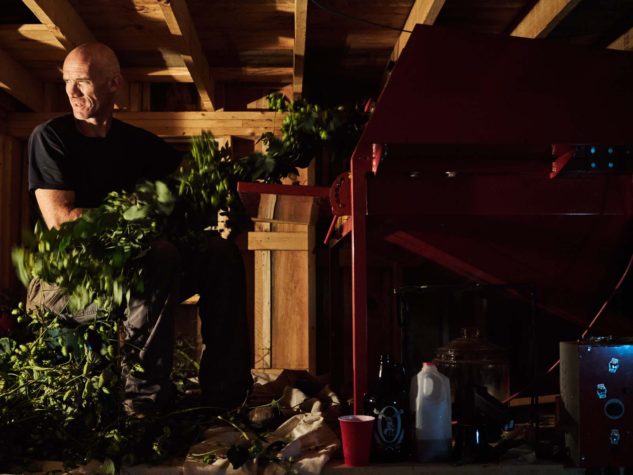 A midcoast man plants himself in the state’s craft beer scene by growing a hilltop of hops in Alna. Even at a distance, the night air fills with the rattle and hum of the machine spinning, combing, and vibrating the lines until the hop flowers bounce free like popcorn.

In a coal-black t-shirt and pants and work boots, Mike Barker is a tall, angular figure on an Alna hilltop. At 6 feet, 5 inches, he’s moving between farm rows and climbing ladders with an afro pick in his pocket, his closely-shaven head silhouetted against the afternoon sun. The pick, he explains, is “a great tool for combing out the hops.”

He’s at work on an early August evening to inspect the rows of towering hop plants that are growing skyward along tracks of twisted galvanized wire between 20-foot-tall poles of white cedar. He checks the progress of the growing vines, which are technically “bines.” (The shoots of a bine grow by coiling in a helix fashion around a support, instead of climbing vine-like by sending out tendrils.) And what look like puffy green pinecones on the bines are the hop flowers themselves—the ingredient that adds aromatic bitterness to beer and balances out the sweetness of the malt.

Besides the pick, Barker has clippers in his pocket. He pulls and cuts weeds. He feels the ground for dampness and notes that the fast- growing hops are thirsty plants. About 1,000 gallons of water must be pumped to the rows daily from the farm’s pond.

It’s the sweet-smelling end of a long day, and there are lines and texture everywhere—in the rough bark of the poles, the wire, the perennial hops, and the milkweed and birches at the field’s edge. The sun is getting lower. It could be a setting for a music video. I mention this to Barker, and he’s amused. When he was growing up in North Carolina, this Alna farmer—who also works full-time as a purchasing and database manager for a Nobleboro musical instrument maker— played bass guitar for a dozen years in a rock band. Named the Mind Sirens, in the 1990s the group had a sound something akin to R.E.M. or Dinosaur Jr.

But band life is a different era and story. Barker’s family vacationed in Maine for decades, and he eventually moved into their summer house in Southport full time. These days Barker, now in his 40s, is often a one-man show at this 14-acre former hay farm. Since 2012, his aim has been to pursue another longtime passion: beer. More specifically—the growing of hops.

A year earlier, over a couple of pints with friends, Barker had excitedly shown me a handful of dried hops. His plants had taken four years to mature enough to harvest, and he’d used a machine to get the dried hops into pellet form. The pellets smelled of grass and citrus. It was impressive and something new to me. “But what’s really amazing,” Barker noted, “is the scent of the fresh hop flowers.”

Fast forward to the summer afternoon we meet again in Alna, population 709. Newcastle and Damariscotta are south of the farm, and the hiking trails of the Midcoast Conservancy’s Hidden Valley Nature Center are a few miles to the north. The Sheepscot River seems to bend to meet the turns and curves of the main roadway, Route 194, creating frequent water views. It’s a pretty drive to get to the unpaved lane that leads to Alna Hopyard and Farm’s new slanted- roof barn, which Barker built after he and his mother, Patricia Krebs, purchased the property. Next to the barn is a pond that’s the source for the solar-powered irrigation system.

Barker likes the idea that no matter how the world changes, he’s doing a small part to make sure there will be a way to make beer locally. He notes that hops have a long history in European brewing and were brought to New York and New England as early as the 1600s. But the hops used in most American beer today come from the Northwest. America’s cultivated hops are often named for Oregon and Washington roots like Willamette, Centennial, and Cascade; much of Barker’s plot is planted with the Cascade variety.

There’s increasing interest in growing hops in Maine. Announced in December, Maine Congresswoman Chellie Pingree is helping to lead a bipartisan effort to support hops research. Other enterprising growers include Aroostook Hops in Westfield and the Hop Yard in Fort Fairfield and Gorham. Each has a ready market of potential customers—the Maine Brewers’ Guild lists more than 60 brewing companies operating in the state. Maine has plenty of fresh water sources and produces the other key brewing ingredients, too, like grains (wheat, oats, spelt), malt, and honey.

Hops are fast-growing. Bines spurt forth dozens of yards in length in a season. When I visit again on the first of September, the Alna bines are even longer, taller, and studded with plump hops flowers. The hopyard looks like a vineyard on steroids—a lush jungle of intoxicating-smelling, towering rows of green.

Soon, wearing t-shirts and flannel, boots, and shorts, staff from Oxbow begin to arrive in cars and trucks. It’s brewmaster Tim Adams, the blond-bearded founder of Oxbow; Mike Fava, Oxbow’s head brewer; Anne Marisic, director of retail sales; and Anson Biller, a young farmer who manages the grounds and orchard at Oxbow’s Newcastle farm, along with his own Full Fork Farm in China, Maine. Mochi, a burly black brewery dog, is also along. Together, the group walks the hopyard with Barker to identify which sections they’ll harvest tonight.

Adams explains that the Alna hops are to be part of the annual Harvest beer that Oxbow brews with all-Maine ingredients. It’s a wet- hop process, meaning that instead of using  dried hops, the fresh flowers are brought to the brewery the next day and immediately added to the brewing process. Just 490 gallons will be made, and once fermented, the Harvest brew will be released in late October at Oxbow’s annual Goods from the Woods gathering. Adams describes the beer as “featuring Maine’s whole grains and what’s happening on this hill.”

The brewers make fast work of choosing. To mark their selections, Barker uses small red flags. All senses are involved, but especially smell. The ritual is repeated over and over— plucking a flower and pulling it open, closing both eyes to inhale the smell, getting neon pollen on fingertips, and sometimes the tongue. When Barker tastes the raw pollen, he says it’s acidic, like yellow mustard, and practically numbing.

“This is super exciting,” Adams says. “I want to string my hammock between the hops and sleep out here.”

Later in the night, he will. But right now, the crew’s ready to start pulling down hops and getting them into the noisy red harvester machine that separates hop flowers from the bines. Barker has his shears and cuts a few shoots. One by one, each of the Oxbow crew grabs a plant and pulls vigorously, heaving until the bine releases in a yards-long tangle that each person triumphantly hangs around his or her shoulders.

It’s a giddy-exuberant harvest scene, and Barker stays close by. A love of beer is part of his family heritage, Barker explains. His grandfather, Roland Krebs, worked on the Budweiser account for the D’Arcy Advertising Co., and wrote about the history of Anheuser- Busch and its brewing success in the 1953 tome Making Friends Is Our Business.

The all-night harvest underway, the Oxbow crew continues to bring hop bines to the barn for Barker to process, a hands-on, meticulous task of feeding the bines through the loud contraption. Even at a distance, the night air fills with the rattle and hum of the machine spinning, combing, and vibrating the bines until the hop flowers bounce free like popcorn and collect in a wire bin. To reach the brewery’s goal of 105 pounds of fresh hops, the harvesting and processing will span the next dozen hours. Once the night sky darkens, the brewery colleagues light the bonfire and open a growler of beer. In the morning, they’ll load the hops in their own vehicles to carry back to the brewery together.

Along the drive to Newcastle and Oxbow’s “rustic farmhouse brewery” on the winding Jones Woods Road, leaves on the birches have turned golden. It’s been 41 days since the Alna overnight harvest, and the wait is over. Tim Adams says the Harvest brew is tapped and ready for some in-house sampling. He’s excited to taste the results. “You can only capture this unique hop character once a year by using these fresh hops,” he says.

To commemorate the “born-on” date for this all-local beer, several of the brewing team gather near the barrels with glasses—lots of work boots and beards here. Anne Marisic is beaming at the memory of the harvest. Brewer Tyler “Doeboy” Havrilko taps a keg and pours some for everyone. The rituals of inspection and smelling begin again.

I hold up a glass, too. The beer is sunny yellow, in the farmhouse saison style. At first whiff, I recall the fresh hops. We’re all standing in a circle and the comments begin to flow. It’s a warm day and the brewery doors are open wide to the view of the adjoining woods and pond. Mochi the dog is off leash ambling about again. I listen to the brewers’ comments: “soft, yet dry,” “no skunk,” “a grassiness,” and “a smooth, almost slick mouth-feel.”

Then Adams offers a wide grin and a summation: “This beer kicks ass.”

It doesn’t seem fair. While we taste, Barker is at his day job. He’ll try the beer later, though. And even though he contends that hops growing is “more art than science,” he’ll also be sending samples of the latest Alna crop to a lab. That’s to analyze the hops’ acidity, oil content, and other chemical characteristics. All of this informs his plans for the next growing season—including a goal to modify the harvester machine for better efficiency and reduce the human fatigue (largely his) from the repetitive motion of feeding bines into the machine.

Throughout this winter, he’s taking time to mull over plans for all of the farm work and challenges ahead. He’s also hoping to add another brewery or two to his client list. The hilltop hops operation is still young. Besides Oxbow, Alna Hopyard and Farm sold hops last year to Allagash Brewing Company, Black Bear Brewing Co. in Orono, and Boothbay Craft Brewery. He’d like to do more.

“I personally never want to run out of beer,” Barker says, and he has hops dreams that are even loftier. “I always wanted to make sure that Maine never ran out of beer. I want to help make Maine beer-independent.” 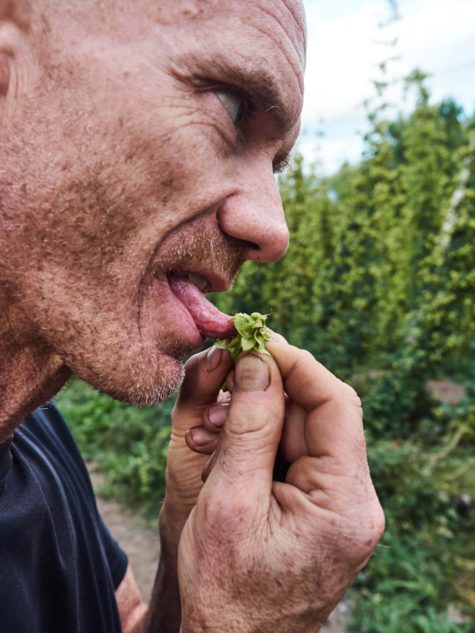 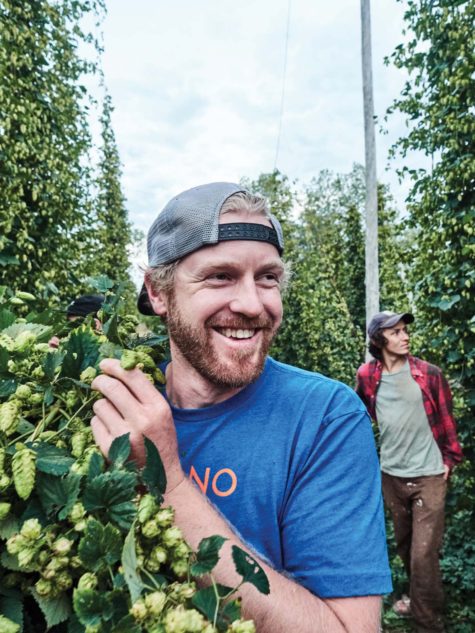 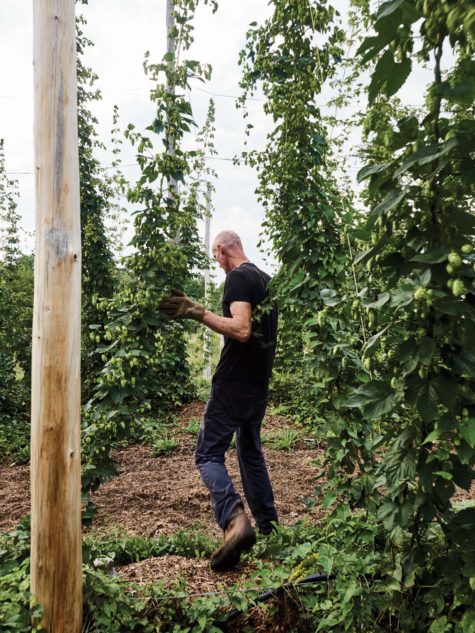 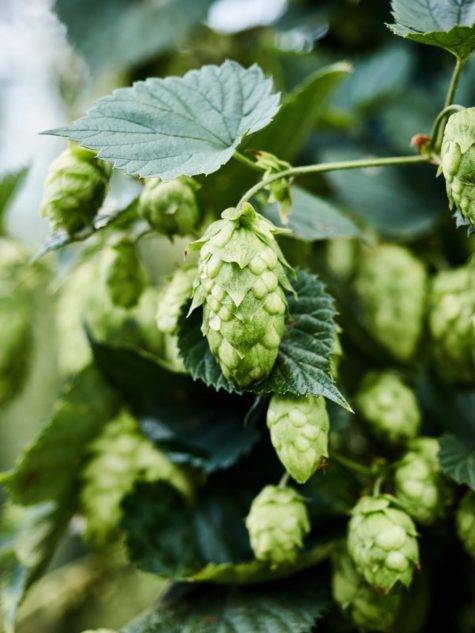 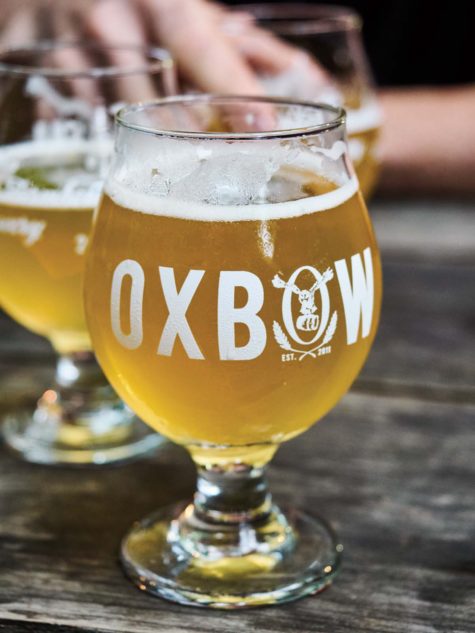 Oxbow harvest saison at the brewery in Newcastle, Maine