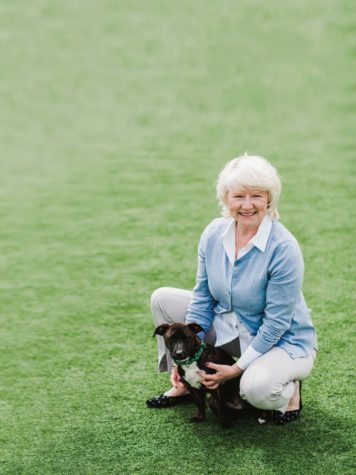 “Animal welfare in Maine is exciting, complex, and dynamic,” says Patsy Murphy, executive director of the Animal Refuge League of Greater Portland. When she was a child, she and her siblings constantly tried to rescue animals, from an unwanted litter of kittens to wild and abandoned animals. If Murphy sensed she could help, she was there. So, when Murphy started her job at the Westbrook animal shelter in 2010, she knew she had landed in the right place. The organization was struggling to connect with its community, and she saw it as brimming with opportunity. “My goal was simple: to weave the people, the animals, and the community together to create a dynamic and innovative shelter for Maine,” Murphy says. It’s a goal that she has since reached and continues to expand upon today. Under Murphy’s direction, the organization raised $6.5 million to construct a new facility, which opened in 2016. The state-of-the-art space has allowed the organization to help more than 6,000 animals every year, from nearly every part of the world. They have rescued animals from meat farms in South Korea, overburdened city shelters in Los Angeles, and hurricanes in Puerto Rico, as well as helping to relocate pets from the deep South. The organization also provides resources to support and promote adoption and pet wellness, and it is cultivating the next generation of pet owners by teaching them empathy, responsibility, and respect. However, Murphy’s greatest accomplishment will always be in the number of lives saved.