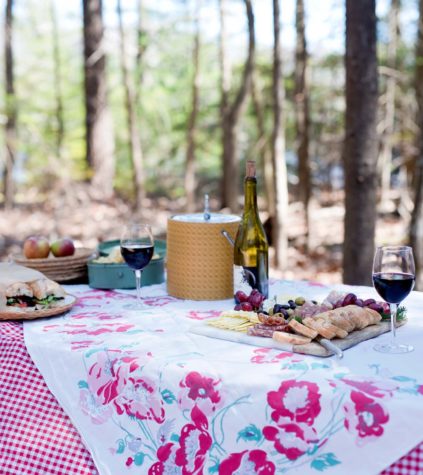 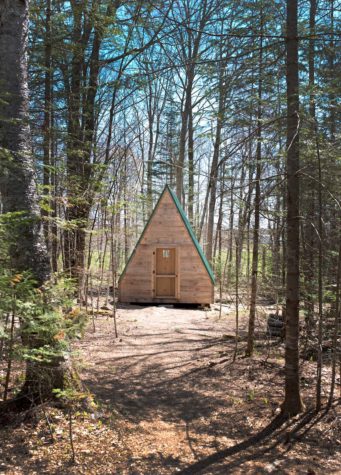 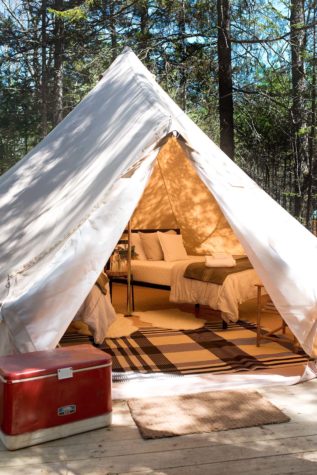 The tents at Tops’l Farm are designed to be comfortable for a multi-night stay without being too precious. They feature indoor-outdoor rugs, two twin beds, and a selection of flea market finds to make each sleeping area feel unique and just a little designy. 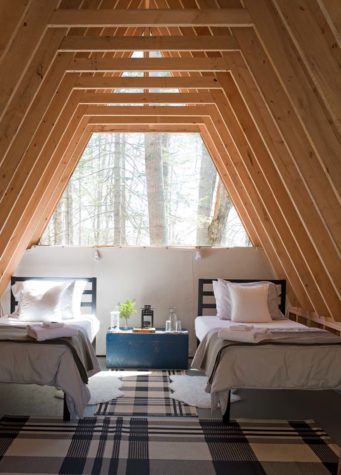 Like the tents, the A-frames reflect Sarah Pike’s interest in decor and retro design. Yet they don’t try to be glamorous—instead, the cabins are practical and relaxed, with thoughtful touches like good sheets and warm wool blankets. 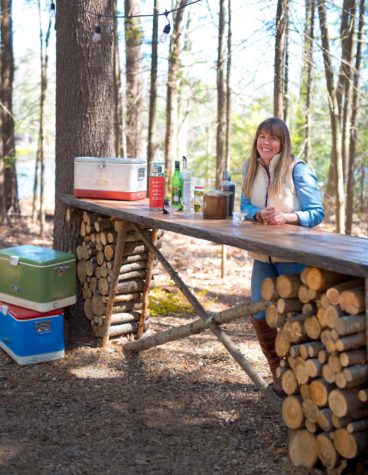 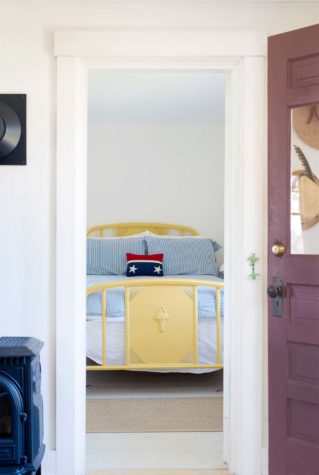 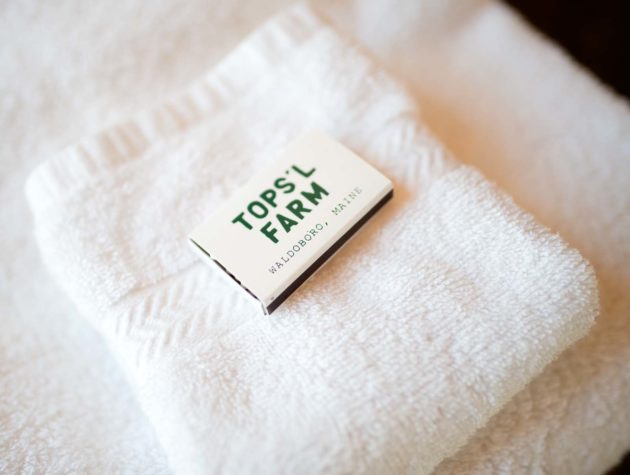 At Tops’l Farm, Sarah and Josh Pike have built a clever campground and event space in laid-back farmhouse style.

June, 2019 By: Katy Kelleher Photography: Jamie Salomon
The cabins feel like relics from another era. Tucked in the mossy woods off Route 32 in Waldoboro, Tops’l Farm’s mini rental woodland cabins harken back to the 1950s and 1960s, when the A-frame reached its peak popularity in the United States. That’s what these delicate cabins are—pinewood A-frames, built just big enough to fit two twin beds (topped with sharp white linens and wool army blankets), a nightstand, and a big, open window to the forest beyond.

“I hate the term ‘glamping,’” admits owner Sarah Pike, “but until we find a better word, that’s what we do.” The 83-acre property is split down the middle by the relatively quiet coastal highway. On one side is the Pikes’ renovated farmhouse and cottage, as well as a long, rutted path that leads to the Medomak River, where Sarah and her husband, Josh, have created an event space for pop-up dinners, company events, and yoga retreats. (The event space includes a heated yurt, a large fire pit, a circle of big, contemporary Adirondack chairs, and a heavy V-shaped hemlock bar top that hangs from three trees.) On the other side of the road are the glamping quarters.

There are five canvas tents, outfitted with two beds apiece, plus a bathhouse/camp kitchen where guests can recharge their phones, wash dishes, and prep food. This campground is also where we find the A-frames, which are, from a design perspective, the standout feature at Tops’l.

And that says a lot, because there are a lot of charming aesthetic moments on this farm. There are old gnarled apple trees that spread their blossoms over grassy green fields. There are stone walls and meandering forest trails. There’s a little red guesthouse where you’ll find a cheery yellow vintage bed, Shaker-style chairs surrounding a small hardwood dining table, retro textiles, and an old-fashioned rocker. (Located next to the main farmhouse, this area is also available to rent. “It was our first foray into Airbnb,” explains Sarah.) Yet the A-frames take the cake.

An A-frame is a simple structure. It’s a house shaped like an isosceles triangle with a roofline that slopes all the way to the ground. According to architecture critic Alexandra Lange, who documented the contemporary rise of the A-frame for Curbed, the “essential nature” of the house comes from its elevated position. They “float slightly above their environment,” writes Lange, “a viewing platform for an expanse of nature…leisure is part of their very character.” Before the 1950s A-frames didn’t really exist in America. Their rise coincided with the rise of the vacation home, and with a national push to grant citizens greater access to public lands. In the 1960s hundreds of thousands of acres became suddenly accessible, thanks to the construction of highways and byways across the country. This was an era, like today, when people were interested in indoor-outdoor living. They didn’t just want to go see nature. They wanted to be in nature.

That’s the goal of Tops’l Farm. “The A-frame is so iconic,” Sarah says. “I’ve come to realize something that drives me is creating a sense of surprise and delight.” People know what the peaked little house symbolizes—even if they don’t think about it often, it’s in our cultural DNA. A rustic cabin means you’re not at home anymore. You’re not going to flip on the television or do a load of laundry, and you don’t have to worry about putting down a coaster for your drink. “When they arrive, I love to see people open the door and go in and immediately relax,”she says.“They come here with tense shoulders. They come here looking for some peace and fresh air. I love offering that to people.” With the back wall open to the woods (save for a bug-deterring screen), Tops’l Farm’s pinewood A-frames feel as though they’re part of the environment. They’re almost primitive in their simplicity, except that Sarah has gone to great lengths to keep them comfortable, with plaid indoor-outdoor rugs laid on the floor, quirky flea market finds on the tables, and sturdy, comfortable black-painted beds from Joss and Main. “Almost everything has been sourced from flea markets,” she says. “I joke sometimes that all this is just to fuel my love for flea markets and junk shops.” While everything is in good shape, the cabins feel authentic, retro, and lived-in. Never too precious.

Sarah and Josh seem like unlikely farm owners. He’s the founder of a digital start-up, and she’s spent much of her adult life running her own meal delivery business and line of junk-free frozen foods. But Josh grew up in Maine—he’s a graduate of Carrabassett Valley Academy, near Sugarloaf—and Sarah, too, has roots here. “My parents moved to a farm in Montville to start an organic farm when I was in third grade,” she says. “I was so ticked about it.” As a kid, she was never very interested in the farming lifestyle. She avoided planting and weeding and harvesting. Instead, she learned at an early age how to run a household. After high school, Sarah fled Maine and went off to college in upstate New York, where she met Josh. “I’ve spent almost my entire life running away from dirt roads and rural Maine,” Sarah says. She ran first to California, then to Utah, and finally to Massachusetts. All the while, Josh dreamed about someday coming back to his home state.

It took one weekend to change everything for Sarah. In 2015 Sarah, Josh, and their two boys went up to Edmunds to join forces with Sarah’s brother and his wife, Rachel Bell of Tide Mill Creamery, and make a big batch of hard cider. “That weekend, we immersed ourselves in things I was trying to keep at bay,” she says. “We were focused on a common task— creating and experiencing things together—it was great fun. On the six-hour drive home, I started to think, ‘OK, maybe we should do this.’” In the car, while Josh drove the family home to Massachusetts, Sarah went online and found the 83-acre farm in Waldoboro for sale. Almost immediately, she realized that this was the place.

These days, Sarah and Josh split their time between their house in Portland and their place in Waldoboro. When I meet Sarah, she is gearing up for the summer season with the help of her mother, who lives nearby and still runs a family homestead. It’s their third year in operation, and Sarah is excited to continue her work as a hostess-in-the-woods. While she has big dreams for future endeavors (including making alcohol from home-grown vegetables and expanding the pop-up dinner series), she also finds great joy in facilitating someone’s first experience with camping and showing them how they can live with less.

“Our goal is to strip it all away,” she says. “We want to break down the barriers of spending a night in the woods. There are people who come here who have never spent a night in the woods before. They don’t have the gear; they don’t know how to cook over a campfire.” Sarah never laughs at city-dwellers. She recalls one young woman who came to Tops’l Farm with a friend. They had booked a cabin, and while many of us wouldn’t consider sleeping in a wooden shelter camping, this was the most rustic thing the young New Yorker had done.

“She had never built a fire in a fireplace before,” remembers Sarah, much less outdoors. “She was getting stressed about cooking, and I was like, ‘We got you.’” The next day, Sarah went over to the cabin and showed her guests how to use a cast-iron skillet over a campfire to make a hearty breakfast of local sausage and “beautiful blue eggs.” In a few minutes, the guest was scrambling eggs herself. “We helped her set up, but she felt empowered to cook over that fire,” says Sarah. “That is what we’re really giving people.” 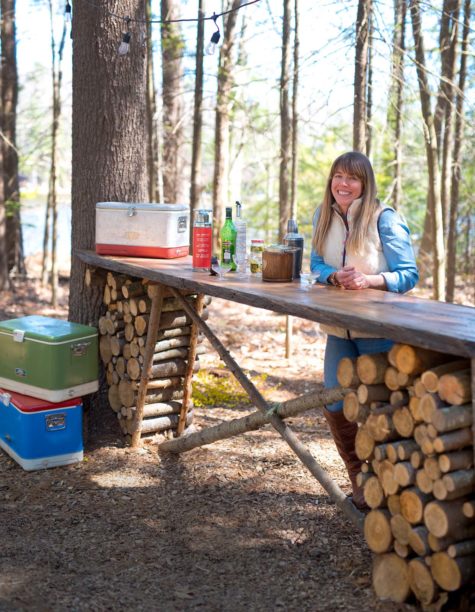 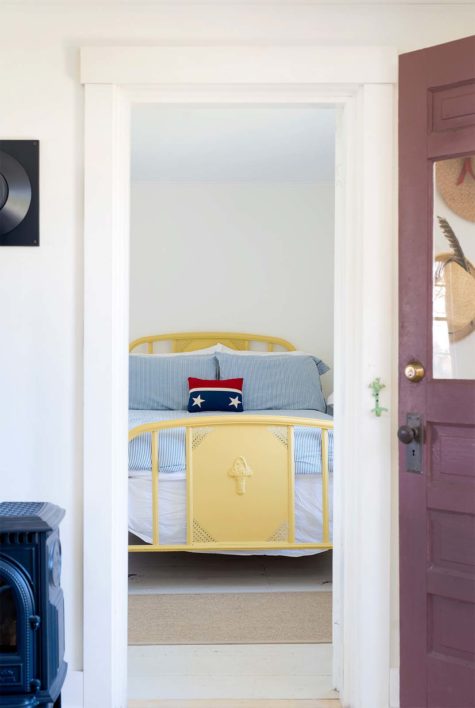 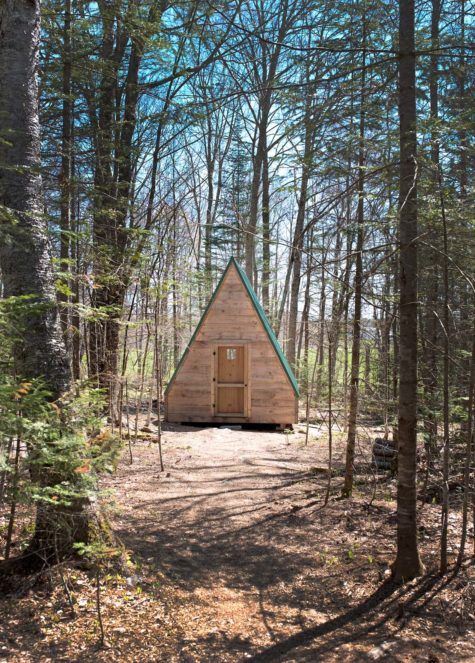