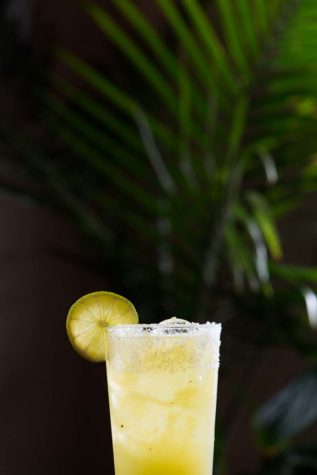 The Tekiwi cocktail is a refreshing mix of tequila, Cointreau, kiwi juice, and lime. 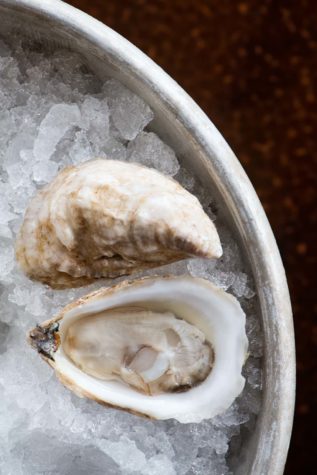 Local oysters on the half shell. 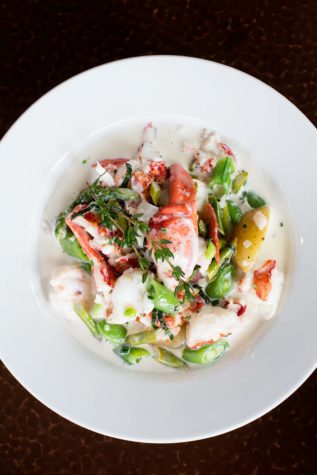 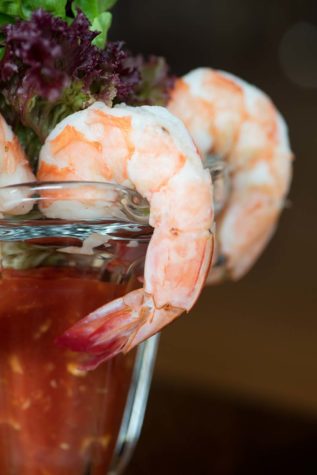 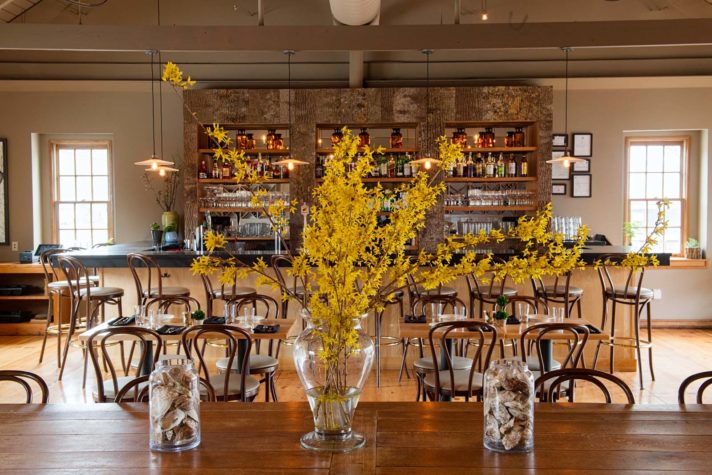 Wood, iron, stone, and natural objects create a minimalist, yet warm environment at Pearl Kennebunk Beach. The back bar is faced with real bark that has been kiln dried to keep it from curling. The walls and ceiling are painted with Weimaraner by Benjamin Moore. 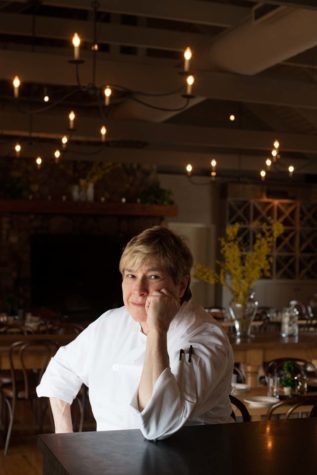 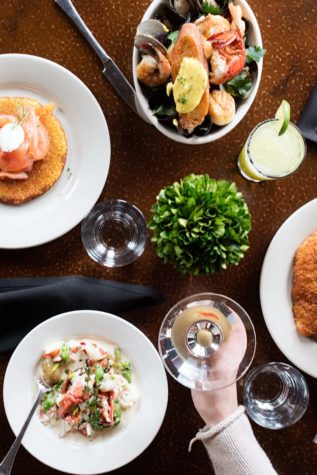 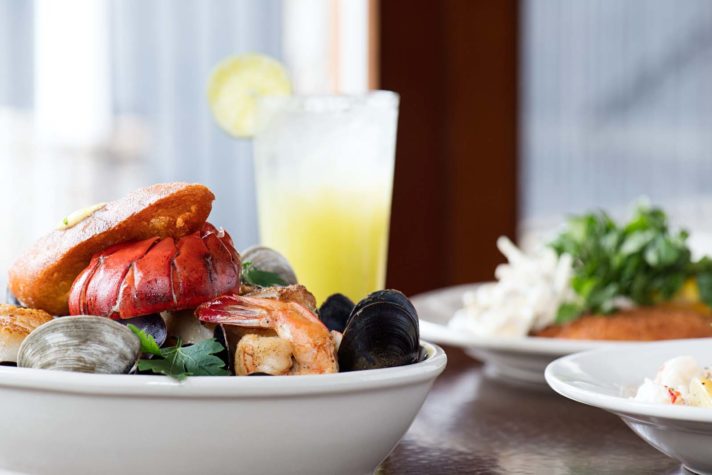 A brimming bowl of bouillabaisse with crispy pan-fried chicken topped with celery root slaw and watercress in the background.

For chef Rebecca Charles, classic dishes are what memories are made of.

I clearly remember my one and only visit to Pearl Oyster Bar in New York City’s Greenwich Village. It was on a date with the man who is now my husband (the reason, no doubt, that I abandoned my usual prohibition against eating lobster outside of Maine). Sitting on a barstool in the restaurant’s narrow dining room, I took a bite of chef Rebecca Charles’s lobster roll and was flooded with memories of my childhood summers in the midcoast. Charles had gotten the simple and iconic sandwich absolutely right: meaty chunks of tender lobster meat with just enough mayonnaise to bind them together, finely diced celery for a bit of crunch, and a soft hot dog bun toasted in butter. I nearly wept at the emotion it inspired.

The chef, who turned 65 earlier this year and has been cooking professionally since she was 20, says that, like her mother and grandmother, she is disinclined to displays of emotion. Yet she has created two restaurants, in New York City and in Kennebunk, where nostalgia is a not-so-secret ingredient, as essential to her menus as Maine lobster. “When I opened Pearl in New York in 1997, I wanted people to eat things that they remembered having as a child and have that association of the childhood memories, and it worked,” Charles says.

“I still try to do that, not just with seafood, but with everything we make here.” Charles and I are talking at a long, rustic wooden table in the center of the airy, serene dining room at Pearl Kennebunk Beach. On the nearby walls are framed photographs of three generations of her family on summer vacations in the Kennebunks, including one of Charles as a smiling seven-month-old baby lying on a blanket on the beach. Her maternal grandparents first came to the resort community as a young couple in the summer of 1917, driving up from New York City in a shiny black Packard touring car. “I can imagine Pearle stepping off the running board and running down the tiny path to the cashmere sand of Gooch’s Beach,” Charles writes of her restaurants’ namesake in her 2003 memoir/cookbook, Lobster Rolls and Blueberry Pie. For decades, family members stayed at Forest Hill House, now the White Barn Inn; several of the vintage photos hanging in the restaurant were taken on the Forest Hill grounds.

With 150 seats, including a spacious outdoor terrace, and unforeseen setbacks, the Kennebunk restaurant has been a bigger undertaking than the tiny New York original. In the spring of 2016 Charles bought and renovated the building that had most recently been the Italian restaurant Abbondante, only to have her plans for opening the following season dashed by a catastrophic flood when the sprinkler system burst over the winter. The three-story building had to be stripped to the studs, delaying her opening until last summer. A fan of minimalist design, Charles kept the look of the large dining room deliberately spare, painting the vaulted ceiling and walls a subdued greige (Benjamin Moore’s Weimaraner) and stripping and refinishing the wide boards of the pine floor. One side of the room is dominated by a massive fieldstone fireplace that is flanked with wine storage cabinets; on the opposite side is a long bar with classic bentwood bar stools that match the dining chairs. Downstairs, Spat Oyster Cellar is a cozy low-ceilinged space designed to evoke an old-school New York City oyster bar. “Pearl in New York was meant to be a little breath of Maine, and Spat is meant to be a little piece of what New York might have been like at the turn of the last century, when there were oyster bars by the hundreds,” Charles says.

On a chilly Friday evening, a friend and I are instantly warmed by both the friendly greeting and the mood at Spat, which is nearly full with a lively crowd. Tucked into a cozy table near the fireplace by general manager Tara Padilla, we order cocktails: a lavender mead mule for my friend, made with particularly zesty house-made ginger beer, and a refreshing Tekiwi—tequila, Cointreau, kiwi juice, and lime—for me. Ever since Charles described them a few days ago, I’ve had her fried oysters on my mind. Coated with cracker crumbs, the oysters are crisp, plump, and piping hot, each of them served in an oyster shell. As the server come up and presents them, she explains that the tartar sauce is conveniently in the shell beneath tell me this is the each oyster, the way Charles has served them for decades. We also share a warm best version of johnnycake topped with generous slices of silky smoked salmon and a dollop of crème fraîche—a New England/New York mashup and another Charles signature. Neither of these starters is complicated, but they are delicious and intensely satisfying. “I don’t go in for international, global ingredients for the most part,” the chef says. “I prefer that people find the plate of food I’m serving accessible and understandable—in a best-case scenario, that they associate it with something they had a long time ago.”

Following a classic salad of baby lettuces with roasted gold and candy cane beets, generously scattered with Roquefort crumbles, our entrees continue the nostalgic theme. Charles adapts the vegetables in her lobster stew to the seasons; ours includes just-cooked, kelly green sugar snap peas and asparagus, and rosy peewee potatoes in a Pernod-scented broth, a bowl that is as bright and colorful as it is rich and luscious. The server-recommended pan-fried chicken is a full boneless breast, pounded so it fills the plate, coated in crumbs, and fried to a perfect golden brown. As I fork up bites of the crisp, hot chicken accompanied by cool and tangy caper-studded celery-root slaw and undressed watercress, I’m reminded of the Wiener schnitzel I first ate years ago in Salzburg, Austria—a long way from coastal Maine but a happy food memory, nonetheless. The shoestring fries we’ve ordered as a side are another Charles trademark and the same ones that accompany Pearl’s famous lobster roll. The herb-flecked fries are as addictive as potato chips, and we can’t help making a dent in the sizeable portion.

After such indulgence, dessert seems out of the question until we encounter the chef on our way to the door. “But I’ve been whipping cream for you,” she teases, convincing us to sit at the bar and share a serving of her chocolate mousse. The dessert is yet another example of the chef’s time-honored style. Made with Callebaut chocolate and crowned with a pillow of unsweetened whipped cream, it is plush and creamy, everything this classic sweet should be. We make sure to stop by the kitchen and let Charles know how much we enjoyed it.

Discussing the business she’s been in for 45 years—arguably one of the hardest to successfully maintain—Charles can sometimes sound a bit jaded. But when she talks about wanting to give people a memorable experience through her food, her expression softens and her eyes twinkle. “There are some things that I’ve eaten in my life, and I remember it like it was yesterday,” she says, recalling the roast chicken she ate in a sunny square in Brussels and her first taste of fried oysters at Galatoire’s in New Orleans. “When people come up and tell me this is the best version of this thing that they ever ate—that’s what I’m going for.” Charles compares her tried-and-true dishes, some of which she has been making much the same way for 40 years, to “an old tune that sticks in your head because it hasn’t lost its value.” With her pragmatic approach, she is not looking for a meal at Pearl Kennebunk Beach or Spat Oyster Bar to inspire wonder or awe, but instead to provide genuine joy. “I’m a fairly shy person,” Charles says. “I know it may sound corny, but it’s the only way I have of really showing love.” If home is where the heart is, hers is in her restaurants’ kitchens, surrounded by memories of her family, who are surely looking on with pride. 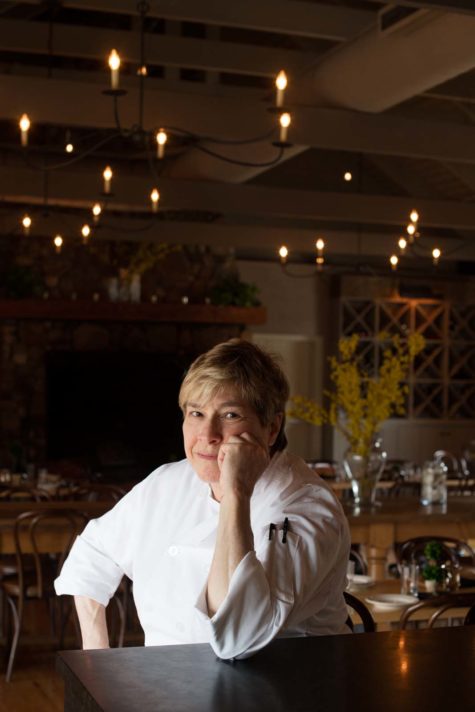 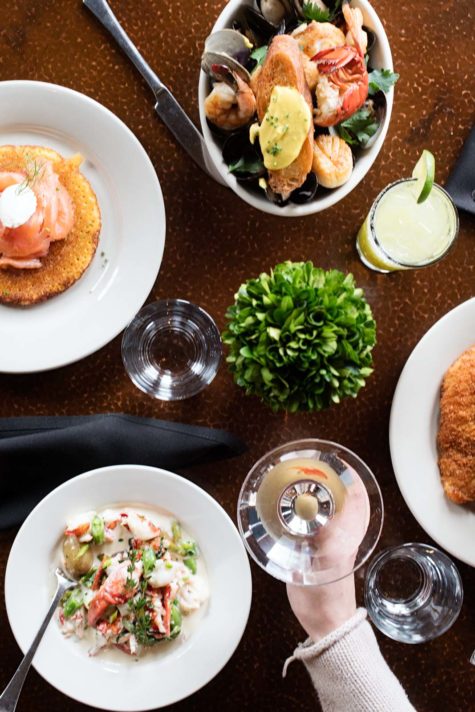 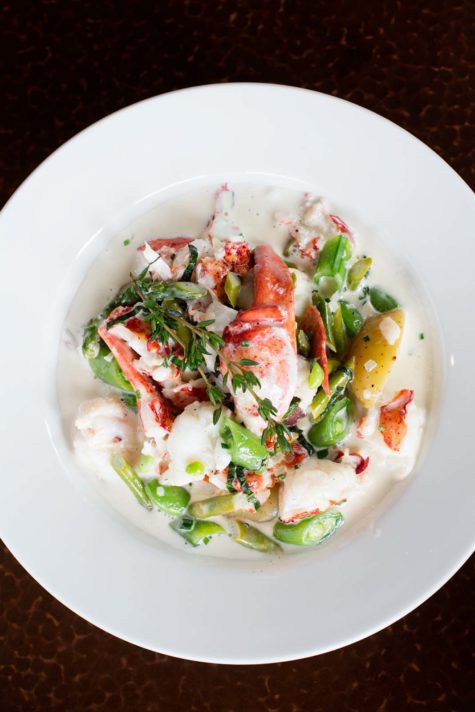