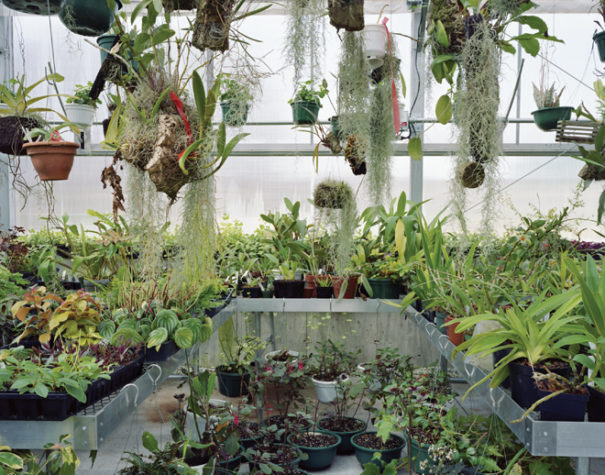 Kevin Kearns is a horticulturist and the director of the Seedling Program at the Morrison Center in Scarborough. The program employs twenty adults with developmental disabilities in two state-of-the-art buildings known as “the happiest greenhouses in Maine.” Plants are for sale to the public Monday–Friday, 8:30 a.m.–3:30 p.m.

This is the “tropical orchid” area in the conservatory house. Kearns focuses on growing poinsettias, geraniums, and orchids to keep work and sales consistent through the year. Each worker has his or her own barcoded stickers, so that when a plant they’ve potted sells, they receive the profits.

Kevin Kearns has two degrees in horticulture. He is a “plant geek” and an orchid enthusiast. He refuses to be called an expert for good reason: there are twice as many species of orchids as there are of birds, and four times as many as of mammals.

The greenhouse has many rare plants, in part because donations are accepted. Kearns recently took in hundreds of plants from an elderly orchid collector, including specimens from the 60s and 70s. A few years ago, the greenhouse attracted the attention of another collector: an orchid thief (who was caught).

Horticulture therapy developed in the West around 1600, after poor hospital patients who worked off their bills by doing garden chores recovered more quickly than other patients. “Everyone has a disability and everyone benefits from knowing how to grow a geranium,” Kearns says. “There is no such thing as a human being without problems.”

Kearns buys ladybugs at $22 a pint. “Because of the health of the individuals here, my bosses are all for trying the safe, fun option over toxic products, even if it costs more. Using pesticides only creates superbugs, but aphids will never develop an immunity to being eaten.”