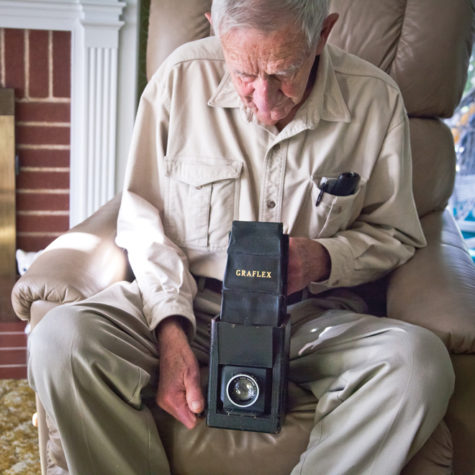 How did you end up being the photographer for the State of Maine?

I was working for a camera shop. I got tired of waiting on people. People give you such a hard time, so I started buying more equipment and decided that I had to do this for a living. I looked around and wondered, “How the heck am I going to get a job being a photographer?”

As I was looking for a job, I noticed they were building the new Turnpike. I went to Portland and spoke with the person in charge of the Turnpike and he said, “You know we could use a photographer to record all of this stuff. How much you gonna need?” I said, “Oh, I don’t know.” I was single at the time, living with my parents. He said, “How about fifty dollars a week?” I took the job. I had a Turnpike car and drove it to take pictures of the construction, which was interesting. Since I was in construction photography, once the construction was over, so was my job. After that, I saw a job had opened up with the State of Maine. I applied for it and got it.

What did you enjoy most about the job?

The people. I liked the people. The only hard part was that I was on call twenty-four hours, so they would call you at one or two in the morning saying you’ve got to be in so and so. Well, “so and so” could be 400 miles away and still in Maine, and you’d have to drive all the way out there to spend an hour taking pictures and drive all the way back. Sometimes in the winter that was no fun.

What were your least favorite moments on the job?

I had to take pictures of accidents including planes and trains. One of the assignments was taking photographs of the airplane wreckage where Samantha Smith was on board coming home from her trip to Russia. These assignments were interesting and gory, but I had to do things I wasn’t used to doing like rappelling down a mountain for a shot. I don’t like heights, but I did it anyway because it was my job.

How did you get into photography?

When I was very young, my older sister bought me my first camera. It was a Kodak, 127 in size—I guess they called it a Brownie. I thought, “Gee, I should do more of this.” Then I started studying on my own. My father built me a darkroom under the stairs and I would develop my own prints in the cellar. I then studied photography and graduated from the New York Institute of Photography. I don’t remember what year.

No. I tell people kiddingly that my nose bleeds when I have to travel to the
next town.

What do you enjoy most about living in Maine?

I enjoy the four seasons.

Want to live in any other state?

I’ve lived here all my life. I can’t imagine living anywhere else.