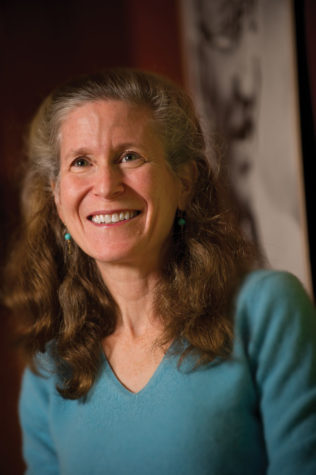 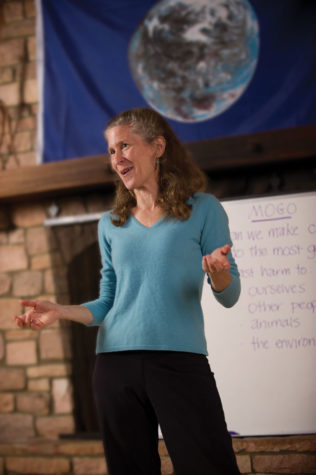 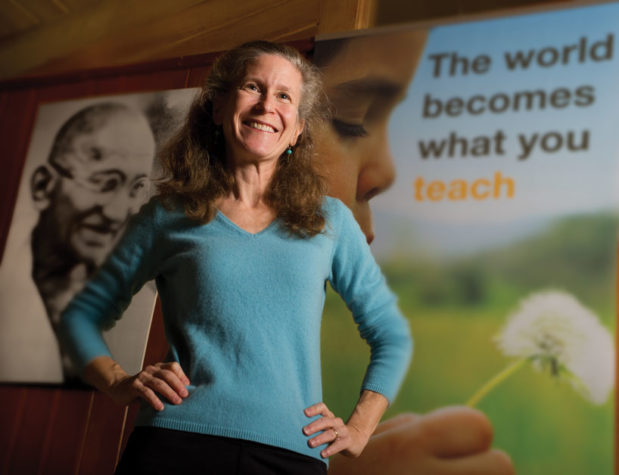 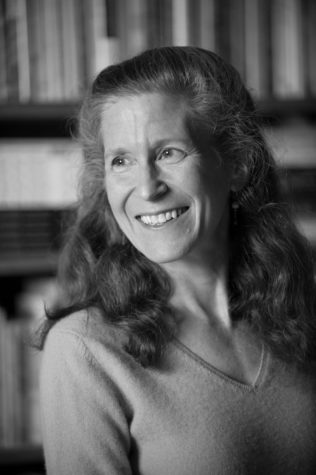 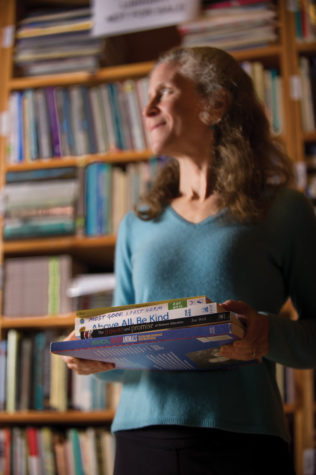 Zoe Weil with five of her six books. Combined, they have fifty-three reviews on Amazon.com. Each one has an average rating of five stars. 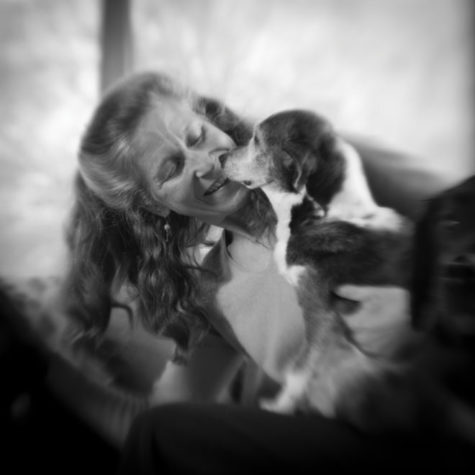 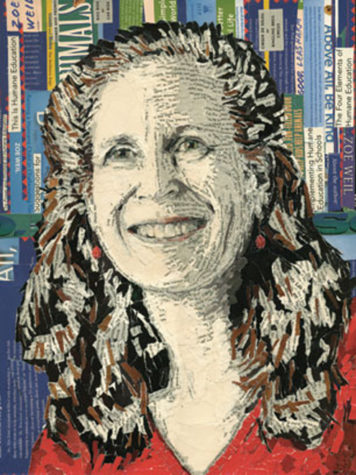 This unique textural portrait of Zoe Weil is comprised of only torn paper and glue. More specifically, it is constructed of pages meticulously torn from Zoe's many books. Artist Seth Balliett currently resides in Scarborough, Maine, enjoying all that life has to offer.

The president of the Institute for Humane Education wants revolution, not reform. She is a reminder that “the world becomes what you teach.”

Zoe Weil is not a downer, which is remarkable for a woman who spends every day thinking about how to tackle the world’s biggest challenges: genocide, peak oil, poverty, pollution, and the welfare of both people and animals. Weil doesn’t get discouraged because she already is what she wants everyone to be: a solutionary.

The Institute for Humane Education, the educator-training school Zoe Weil cofounded in 1996, is located at the end of a long, maple-lined driveway in Surry. Inside the main meeting space, adjacent to her family’s home, Weil holds up a poster with small letters taped to it in an assortment of fonts and colors. There’s a C, a T, an M, an A—almost the whole alphabet. Weil asks if I can interpret the shapes. I can: Coke, Time magazine, Marlboro…but the A is throwing me. It turns out to be the A of A&W Root Beer. When Weil does this exercise with schoolchildren, she’ll tease them as they easily identify the brands saying, “Oh, you must be learning this in school!” Of course they aren’t, but Weil gets the kids thinking about how pervasive branding is, how we all absorb knowledge without conscious consent.

Weil also tells kids not to listen to her. Critical thinking is of central importance to teaching her motto: Do the most good and the least harm. “If the kids believe everything I say, what’s to stop them from believing the next person?” Weil asks. Her aim, and the aim of the comprehensive educational model she teaches, is to get her students to question themselves, their choices, and the world they live in, and to think creatively, uncover connections, and live with integrity. It requires a willingness to be aware and to take action, from small daily choices, like which kind of paper products to buy, to more abstract or less obvious issues like tracing the true cost of a cotton T-shirt or finding a meaningful life path. It is seeing, not just the environment, but society as an organism. The focus is on empowerment as much as knowledge.

“If you ask people, ‘What is the purpose of schooling?’ most people will say something like, ‘For kids to get the basics of verbal, mathematical, technical, and scientific literacy so that they can get jobs and compete in the global economy,’” Weil says. But this kind of answer falls far short of her vision. “If we do a thought experiment and imagine that we’ve actually succeeded at that goal, so that every kid in America who graduates from high school or college or grad school can find a job—if we have 100 percent employment—would we have been successful? I think most people would say yes.” Yet many of the world’s problems, Weil believes, stem from precisely those educational expectations. Or, as Weil says, they “might even perpetuate or escalate our gravest problems.” Reform is not enough—Weil is calling for a total transformation. “We often do not teach for a higher purpose,” she says. “We teach to tests and leave out the juicy, important topics that would engage critical and creative thinking skills.” In Weil’s view, if humane education were a comprehensive curriculum, school would look entirely different.

Weil gets excited when she describes her vision of humane education: “You might have overarching themes for a whole year, like food and water or protection and conflict resolution or building structures and transportation,” she says. “You might have solutionary teams instead of debate teams, where students compete—because we love that in America—to solve challenges at the school, in the community, or even in the world at large.” It would be a school where the basics—reading, writing, math, and science—are taught in service to the greater good. It would be a school in which students could answer the question, “Why do we need to know this stuff?” on their own.

In the late 1980s, Weil discovered that this kind of teaching had a name. For a short time, she worked as an at-large educator for a humane society, but became frustrated because she found it myopic to limit her teaching to pet responsibility, as if pet dogs and cats were different from the dogs and cats used for animal testing. She felt more simpatico with the founders of the animal welfare movement in America than the expectations of her current position. “The original humane educators,” Weil says, “Caroline Earle White in Philadelphia and Henry Bergh in New York City, started the Pennsylvania SPCA [Society for the Prevention of Cruelty to Animals] and the ASPCA [American Society for the Prevention of Cruelty to Animals] respectively, and then started the first organizations to prevent child abuse. The irony of people saying that ‘animal people only care about animals’ is that the founders of the animal welfare movement did both and saw them as inextricably entwined.” The organizations to protect the welfare of animals and the welfare of children started in the second half of the nineteenth century, but the two became disassociated as humane societies turned into dumping grounds for strays and eventually resorted to euthanasia.

Weil moved on from the humane society to humane education. She was hired to teach two weeklong summer courses for middle school students at her alma mater, the University of Pennsylvania. On day three of her course on animal protection, Weil talked with the students about product testing on animals, and she saw an immediate impact. The following day a twelve-year-old boy came back with homemade leaflets. He asked if he could distribute them at lunch—not to fellow students, but to people on the street in Philadelphia. “He became an activist overnight,” Weil recalls. “He learned something, he was upset about it, he wanted to make a difference, and he took action. And this was 1987. He didn’t mimeograph them—they were all handwritten!”

Weil went on to receive a master of theological studies in world religions from Harvard Divinity School. Over the past twenty-three years, she has reached more than 100,000 people, trained thousands of people through workshops and online courses, and led more than eighty teachers through the Institute for Humane Education’s master’s degree and certificate program, and she continues to lecture at conferences, events, and schools. Weil has also written six books, including 2009’s, Most Good, Least Harm: A Simple Principle for a Better World and Meaningful Life. Her next enterprise is comedy: Weil is working on a one-woman show that she describes as “a cross between The Vagina Monologues and Spalding Gray” to bring humane issues to audiences in an entertaining way. She’s excited that she gets to swear—something that doesn’t fit into academic lectures or teaching schoolchildren—and that she still finds humor in the midst of serious work. After all, Weil did fall in love with a vivisector (a vivisector who gave up his grant and his lab and went on to become a veterinarian, a vegetarian, and her husband).

Weil doesn’t shy away from her bold mission or the grave consequences of leaving the education establishment unchallenged. Education can be easy prey for corporations or governments alike—whether through propaganda, subsidies, donations, or indoctrination. In her presentation “The World Becomes What You Teach,” Weil offers a gripping reminder of education’s power to change the world by raising a potent name: Hitler. When people ask, “How could the Holocaust have happened?” Weil sees an unfortunate answer: education. Just as Hitler targeted the youth of Germany and pushed a generation toward darkness, a generation of young changemakers can be pushed toward the light.

“Kids don’t ever say, ‘Don’t tell me that, I don’t want to know,’” says Weil, “but I often hear that from adults. Kids want to know. They’re still in the midst of deciding where their values lie and how to live with integrity. They haven’t developed habits that are unbreakable yet.” But there has been a change since she started down this path. “Middle school kids already know so much now,” Weil says. “They don’t have to be activists; it’s already permeating our society.” While that is, for the most part, positive, Weil has been surprised by how low the threshold of cynicism has become. “Cynicism used to be reserved for young adults and adults, but now I’m seeing twelve- and thirteen-year-olds who say, ‘Yeah, I know it’s bad, but I do it anyway.’ And that’s disturbing.”

Weil’s antidote might be why people find her so inspiring. “Key 2” to MOGO (most good, least harm) living is, pursue joy through service. “So many activists, myself included, often feel despair and rage,” Weil says. But is that what anyone wants to be remembered for? MOGO is about living beyond a focus on yourself, and the beauty of it is that it can be as simple or complex as you want it to be. In a society where the complications of marketing, scale, efficiency—even consumer disinterest—can disguise or overwhelm the impact of our choices, MOGO is a koan for every decision: Which option does the most good and the least amount of harm?

In the big picture, Weil also offers this guidance, for any age: live your epitaph. While hers is ever-changing, its current iteration is this: Zoe Weil was instrumental in changing the purpose of education to graduate a generation of solutionaries.