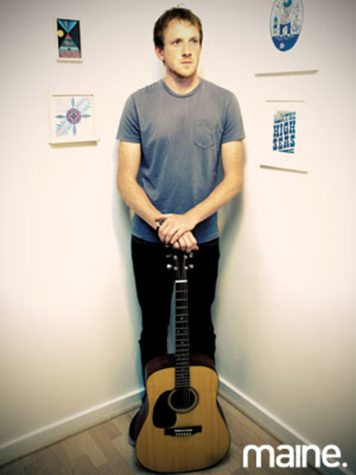 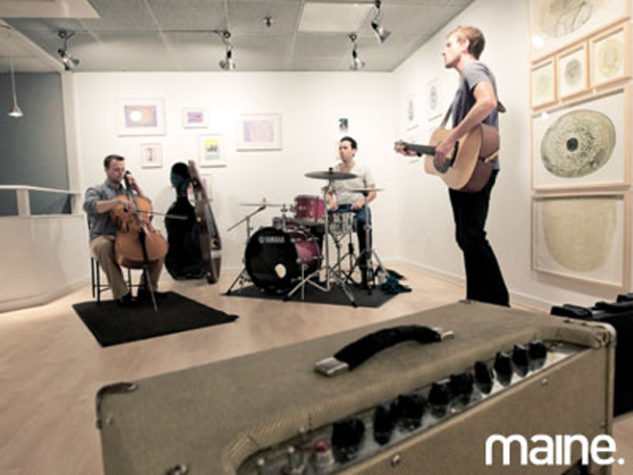 On a stretch of shoreline east of Higgins Beach, a pale glow trembles on the horizon. On another morning, you might find Pete Miller riding his longboard here, but today he is focused on capturing the newly minted April morning with his medium-format Holga camera.

The Holga’s meniscus lens blurs and vignettes, and when he takes another shot it’s a double exposure. The resulting twin suns and their reflections glow like two candles

swaddled in soft darkness—a sunrise, shaken. The springtime image of mirrored suns now graces the cover of Miller’s debut album, fittingly called Shake the Dawn. The album was recorded during the first three months of 2010, when Miller was holed up in a winter rental at Higgins Beach and focused his attention solely on making music.
Although the alchemical process of recording and producing consumed several months, the idea for the album came to Miller suddenly. On a listless drive home for Christmas, Miller struggled with feelings of stagnancy. Grappling with unspent creative energy, the desire to make an album hit him like a thunderclap. “At that moment I was driving, I’ll never forget it—I was two minutes from home and I was like ‘I need to finish this album, I need to start this album!’”

This spontaneous sense of purpose stems from some of Miller’s first musical experiences. At nineteen, he saw Tim Reynolds perform at Burlington’s legendary Higher Ground. Captivated by Reynolds’s rich instrumentation, and looking for an accessible way to make music, Miller bought a djembe, a West African hand drum. He also decided that he would learn to play the guitar by spring break and—motivated by his musical friends at Saint Michael’s College—devoted himself entirely to that pursuit. In typical fashion, he makes light of his own naive eagerness: “I played ‘Leaving on a Jet Plane’ so many times!”

The repetitive playing of John Denver paid off. Fast-forward to a study-abroad experience in New Zealand that culminated in a farewell open-mic night with Miller’s parents in attendance. While he originally intended to play only instrumental pieces (“At the time, it was really cool stuff,” Miller says in defense of his shyness), toward the end of the show he couldn’t contain himself and broke out the vocals. Once he tasted the heady chemistry of making music, Miller began relentlessly exploring reggae and the blues and writing music like crazy.

Much like his music, which distills a variety of styles and sounds, Miller is relaxed and energetic at the same time. He is earnest, lanky, redheaded and freckled, and one might almost be tempted to call him endearingly awkward. When the cover charge is being collected at a show, he asks people to contribute to the band’s “peanut butter and jelly fund.” Look closer, however, and Miller is all poise—as evidenced by his seemingly spontaneous arrival on the Maine music scene as a fully formed musician, with considerable instrumental chops, a polished and arresting album, and a commanding stage presence. The schoolboy charm is a natural foil to Miller’s serious approach to music and his two other passions—graphic design and surfing. The sport rewards his intense concentration with exhilarating moments and meditative calm, and its sublime thrills make their way into Miller’s singing and metaphorical lyrics. He explains that design and music are at opposite poles of his personality, and that “surfing is the piece that moves between,” blending his thoughts together “like a good smoothie.”

As a child, Miller was inspired by the early days of East Coast surfing. His father and his buddies would strap surfboards onto their cars and drive from Annapolis to Ocean City, where they camped out until the waves were good. They were trailblazers, or maybe freaks, coasting swells on the jagged eastern seaboard where no one else even thought to surf. The sublime innocence of these experiences remains a creative force for Miller, who grew up surfing in Maine in even colder and more formidable waters than those braved by his father.

A sense of purity is also expressed in Miller’s designs, from the Holga shots to the polished commercial and artistic work he executes as a professional designer. Miller weaves together his love of color and typeface, open spaces, and retro photography. In everything he does, sentimentality is tempered with a contemporary approach. With trademark verve, he introduces himself on his design website with “Hi, I’m Pete,” before explaining that he promises a “fresh perspective, a stellar communication process, and a guarantee that we have at least one thing in common. If not, then the coffee’s on me.”

Growing up in southern Maine, the youngest in a close, religious family, instilled a deep respect for community. The confidence Miller has shown even from his formative years also contributes to his unique approach to networking and his ability to enlist a talented array of musical collaborators. “I love what everyone is doing in Portland. It’s an amazing group with creativity bursting at the seams, all the time—there’s just so much going on.”
The resumes of contributing musicians on Shake the Dawn read like a who’s who of prominent roots rock in Maine—from Colin Winsor (Gypsy Tailwind) and Ryan Zoidis (Rustic Overtones) to Charles Gagne (The Lucid) and multi-instrumentalist Eric Bettencourt. This list of accomplished players means that Miller’s sound is always subject to change.

During a 2010 show at the now defunct North Star Music Cafe, Tim Garrett played a precise and rhythmic cello while Geoff Zimmerman spit-shined the air with his slide guitar. The other musicians added color and smoothness to the energetic focal point of Miller’s ragged voice. His transient band makes music that is not only infectious but full of integrity, and it’s what makes Miller’s music so mature and popular—his sold-out release party at One Longfellow Square in May last year attracted more than 200 spellbound listeners. It was a great show on a perfect day, and Miller refers to it as one of the most amazing of his life. The crowd was so attentive that whispers between the musicians could be heard in the audience. For the first time, Miller was hearing the songs, which he wrote in wintry seclusion, performed live with a full band.

Listen closer to “Daydreamer.” Beneath its sweet soaring tones the song has a furious twang and a caged bird’s thrumming wings—or perhaps ragged waves crashing against cold Maine rock.

We can take the morning,
Shake the dawn until the
Sun rises and we’ll
Daydream for a while…

Daydreams are fleeting—an early morning with an old camera, a long ride atop a freezing curl of water, or 200 people listening to you sing. But for Pete Miller, there is much more to come. He will keep making waves, and riding them.