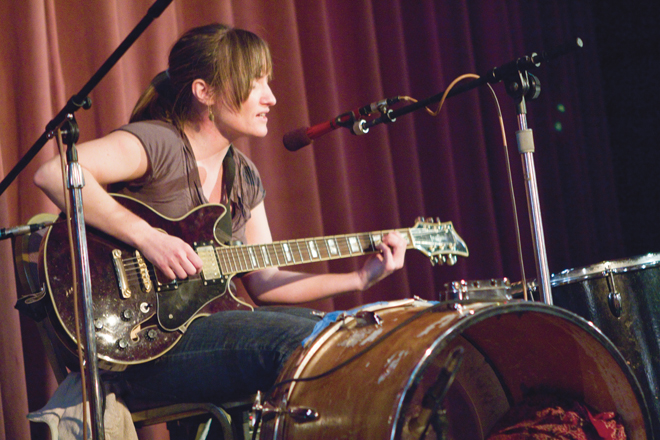 Con Fullam, producer of last year’s extensive compilation album The Amazing Music of Mainers, is already back with another project. In the works for two years, the multidisciplinary exhibition Painters, Players and Poets will finally open on July 20 at the Boothbay Opera House. The show will feature 16 locally crafted chairs, 16 paintings, and a one-hour program that includes nine compositions and seven poems.

A trio of Portland punk bands is on the road this month, starting at the Apohadion Theater in Portland on Friday, July 15, and heading all the way down to Washington, D.C. Butcher Boy, Pamola, and The Waldos share some members and a similar onstage energy.

Local musicians often play cover songs to make extra cash, but what if—instead of Beatles and Weezer songs—we were treated to a selection of local music hits reimagined by one of our own? On July 19, Jeff Beam answers that question at Big Easy when he releases his new free album, The Maine Embassy, which includes songs written by Lady Lamb the Beekeeper, the Lucid, and more. As part of the Cover to Cover series, he’ll follow his own set with a performance of David Bowie’s Ziggy Stardust in its entirety.

Toby Keith
July 9 | 5 p.m.
Toby Keith is easily one of the biggest coun- try music stars around, with several number one and top-ten hits on the Billboard charts, and he’s bringing his big show to the waterfront. Wear your cowboy best.
Bangor Waterfront Pavilion | Bangor | WaterFrontConcerts.com

Darien Brahms
July 13 | 7:45 p.m.
Known for rockin’ out with her band in Portland, Brahms makes an appearance in a slightly different setting for the city’s Sunset Folk Series. Bring a blanket and get cozy.
Western Prom Park | Portland | portlandmaine.gov/rec/summer.html

Matt Bauer
July 16 | 8 p.m.
On his latest sparse, haunting album, The Jessamine County Book of the Living, this Kentucky-born Brooklynite’s musical sensibilities have remained true to his Southern roots while evoking the gritty urban landscape in which he resides today.
The Oak + The Ax | Biddeford | theoakandtheax.blogspot.com

Mary Chapin Carpenter
July 20 + 21 | 8 p.m.
On tour promoting her latest release, The Age of Miracles, the Grammy-winning songwriter stops by this intimate venue for two nights before performing at the Strand Theatre in Rockland on July 22.
Stone Mountain Arts Center | Brownfield | stonemountainartscenter.com

Elvis Costello
July 28 | 7:30 p.m.
It’s less than a year into this gorgeous venue’s resurrection, and we’re already seeing legends such as Elvis Costello selling out shows. Hope you got a ticket in time!
State Theatre | Portland | statetheatreportland.com