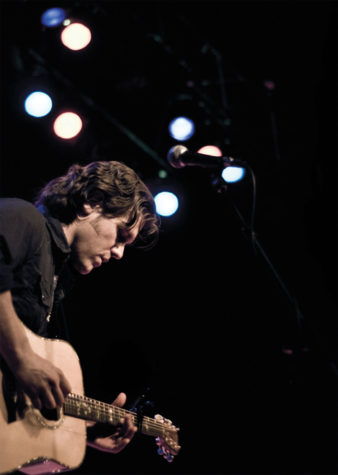 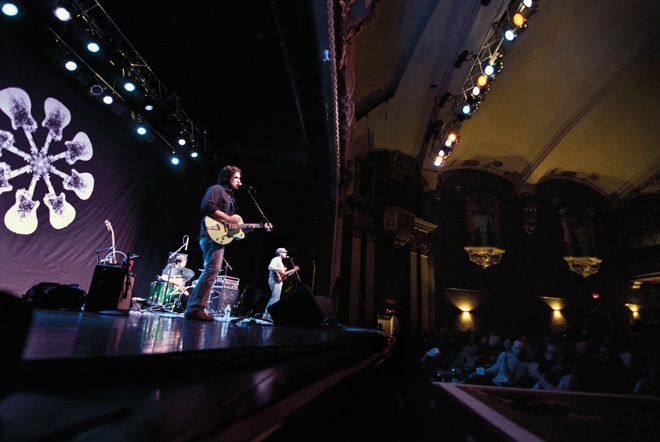 On stage, he makes it look easy, and his soulful, blues-rock sound has captivated audiences around the United States. But his success also stems from his energy and DIY mentality, which have impressed critics and fans with each successive release.

You might mistake him for a football star, a soap opera actor, a man driving a pickup in a commercial. Or you might mistake him for a newscaster—someone with that rare ability to convey gravity without pretension. Jason Spooner looks the part: square jaw, cascading hair, Dentyne smile. But he’s not on television. He’s not a football player, a newscaster, or an actor (he gave that up after college).

He’s a musician, and a highly acclaimed one at that. The Portland Phoenix calls him “an amalgamation of John Prine and John Mayer.” His sound is soulful and playful, with a bluesy roots-rock vibe. It’s got grit, like a street busker or a barside bluesman, but with the thoughtful polish of an experienced songwriter.

He may be a musician, but when you spend time with Jason Spooner, you get the distinct sense that he could be anything.

A corporate executive? An attorney? A doctor? He’s got that cool, all-American charisma that, frankly, through no fault of his own, probably pisses some people off.

Why? Because he makes it look easy. He’s serious, articulate, clear-eyed, and manages to talk about his accomplishments with both an artist’s passion and a businessman’s objectivity. In an industry that often worships and celebrates self- destructive excess, Spooner stands out for his measured intensity and work ethic. At moments, when he talks about his work, he’s less Kurt Cobain and more Kurt from accounting. But make no mistake: this singer-songwriter’s innate talent and sharp attention to the music business have garnered him national attention.

Soon after, Spooner joined up with Andy Rice (bass) and Reed Chambers (percussion) to form the Jason Spooner Trio. It was his second album, The Flame You Follow (2007), that riveted listeners from Maine to Montana to…Well, after Starbucks licensed four tracks, Spooner was piped into 11,000 locations across the country. The big time—or, as the case may be, the “Venti” time.

Tunes from The Flame You Follow aired in regular rotation on various XM and Sirius Satellite Radio stations. A live session at XM Radio’s The Loft generated the band’s first EP, Live on the Loft, which was played regularly on the Sirius airwaves.

In 2008, Adam Frederick took over on bass. Two years later, the Jason Spooner Trio’s third album, Sea Monster, was released, again to significant acclaim. And again, Starbucks and Sirius got on board. The album is currently in regular rotation on more than fifty triple-A (adult album alternative) radio stations across the United States. In the first quarter of 2011, the song “Half a Mind” remained in the Top 30 of the national Triple A Singles Chart for several weeks, eventually reaching the number 18 slot. It was the only independent album on the chart at the time.

In June, Spooner opened for B.B. King. Summer plans include festival slots all over the country: the Targhee Music Fest in Alta, Wyoming, the Naukabout Festival on Cape Cod, the River City Roots Festival in Missoula, Montana, among others. These days, Spooner’s perpetually traveling.

So who’s responsible for this success? What label, media conglomerate, agent, or publicist? You guessed it: Jason Spooner.

In true Maine spirit, Spooner nurtures a hard-core independent streak. He’s a workhorse, an entrepreneur, constantly reaching out to media outlets, radio stations, fans, festivals, and fellow musicians. “If you saw my outbox, you’d think I was crazy,” he says. He simply doesn’t stop. Although he’s been approached by high-level producers and agents, Spooner has made the decision to remain independent and embrace a true DIY self-promotion strategy. In today’s music industry, Spooner says, independent acts, with enough tenacity, can find success on their own terms.

But isn’t this sort of pragmatic vigilance at odds with the artistic spirit? How does one manage to write music and live a creative life while executing the full-time promotional push it takes to get the music out there? All the administrative hoop-jumping, the phone calls and emails, the follow-up phone calls and emails, the website updates, travel arrangements…When you hear about all that Spooner does in a typical day, you understand why bands hire managers and booking agents.

Still, Spooner is unwilling to relinquish control. “If you want something done well…” he says, feeling no need to complete the sentence. From website development and booking to writing and producing, Spooner does it all himself—and he does it with the same unrelenting energy that he brings to his live performances.

Maine is the perfect place for Spooner. Not only because “fierce independence” famously describes the collective psychology of Mainers, but because, when he needs a break from the work, when he needs time to reflect, Maine’s natural beauty becomes his refuge and his escape. It is here that he can drop everything and get lost in the wilderness. “Some might call me a perfectionist or a control freak,” he says. “Maine lets me get away from all that.”

Although he didn’t come to Maine until he attended Colby College as an undergraduate (class of 1996), he’s called it home ever since. He wrote his first album on Lake Megunticook, and Maine’s woods and water still speak to him. He describes it as a “touchstone state,” and says there’s nothing like getting off a plane after a tour and inhaling the ocean air. Even when he’s off developing markets, making new fans, and extending the reach of his music, he looks forward to the time when he can return. Maine, it seems, feeds the artist within him.

For, at the end of the day, Spooner is an artist. He may not be destroying hotel rooms—he may even deem “kindness” the highest virtue—but he’s a person who has dedicated his life to writing and performing songs, trying to convey some truth about the world through his music. Despite Spooner’s polished, controlled exterior, one anecdote shines light on his exuberantly creative spirit.

After a show in Boston, Spooner woke up the next day bleary-eyed. He made his way to a cafe. And what happened to be playing on their sound system? You got it: Jason Spooner. “This is my song,” he told the barista. She smiled mildly. A moment of awkwardness passed between them. Here was yet another customer with a weird, pseudo-creative come-on line. Here was a scruffy, hungover-looking dude off the street who was about to explain how this song conformed to his personal philosophy (“It’s my song!”).

But it was his song. “I wrote it,” he explained.

The barista smiled, this time a real smile, finally getting it.

People all over the place are getting Jason Spooner. They’re getting him because he’s talented, because the music is fresh and smart and soulful.

They’re getting him because he’s working really damned hard to make sure they get him.

And because no one’s going to do it for him.