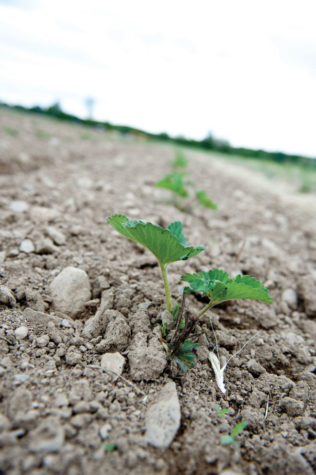 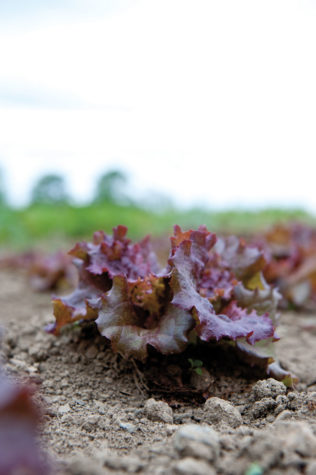 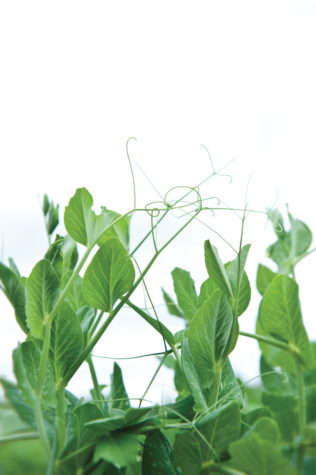 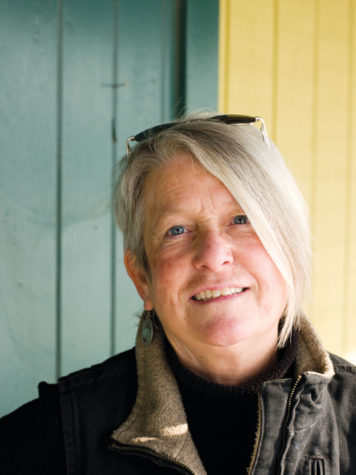 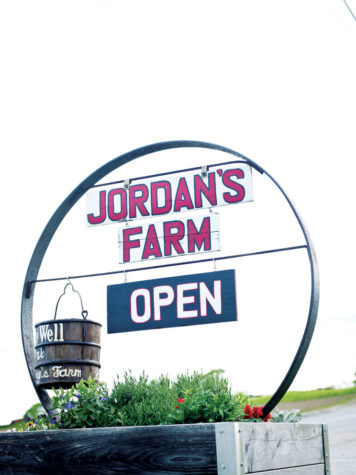 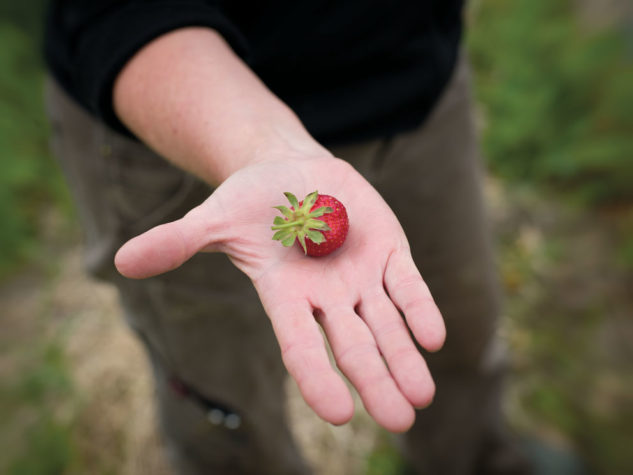 The first strawberry of the new season. Four generations of Jordans have farmed their family's land in Cape Elizabeth. In that time, their produce and especially their strawberries have achieved a very loyal following. 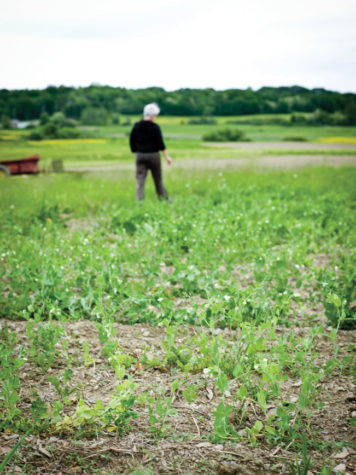 In line with their father's dying wish, Jordan and her siblings preserved their property to be used as farmland in perpetuity. 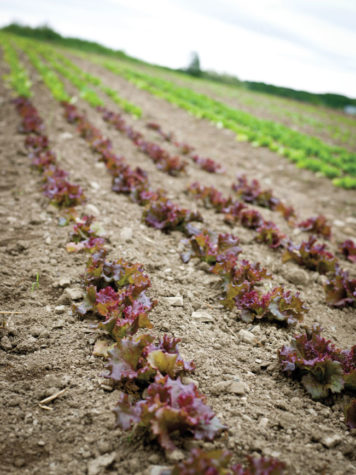 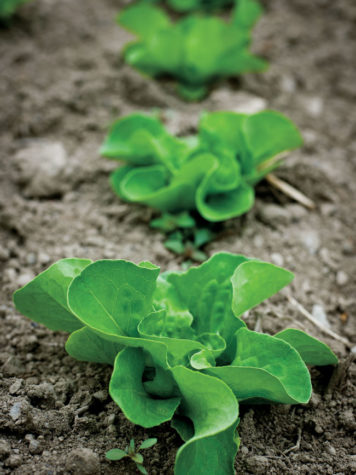 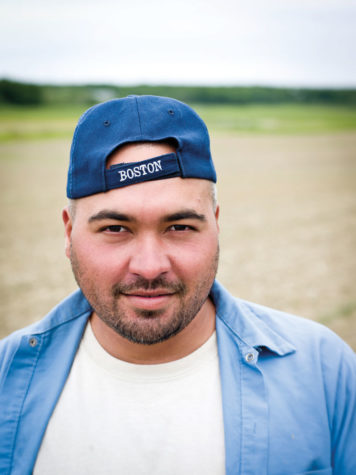 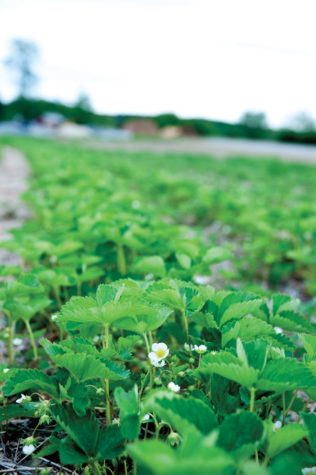 Thanks to a network of tenacious farmers, eating local during the summer months is an easy option—and an enticing one. Cape Elizabeth’s Penny Jordan enjoys bringing her renowned vegetables to everyone in her community.

Fourth-generation farmer Penny Jordan has made a career of nourishing her community. She and her three siblings—Bill, Carol, and Pam—have not only maintained their inheritance, William H. Jordan Farm in Cape Elizabeth, but they have made its produce an ever-present staple of the local cuisine. A bounty of vegetables draws residents to their farm stand, local chefs serve their heirloom roots on top-dollar plates, and their beans feed patrons at soup kitchens in nearby Portland.

Jordan is adjusting her bright orange baseball cap, which covers her close-cropped silver hair. At 57, she reflects on the mission of her family’s farm. “I love the opportunity to create a greater awareness of all of the food that people have in Maine,” she says with certainty.

A self-described lifelong activist with experience in social work and community organizing, Jordan brings a unique set of skills to her work. Since returning to farming with her siblings ten years ago, she has created an alliance of Cape Elizabeth farms, become a well-known panelist at agricultural forums around the region, and begun working with the Maine Hunger Initiative, a local coalition of nonprofits and advocates seeking to reduce hunger and poverty through community-based activism.

The oldest sibling, Bill, who Jordan refers to as “the farmer,” gives a succinct summary of his sister’s professional role: “When I know there’s something that needs to be done, I defer to her,” he says. “She’s the baby, but she has so much energy!” adds her sister, Pam, with affection.

Jordan’s current goal is to increase the accessibility of fresh produce in southern Maine. Her spit and vigor, combined with the pragmatism of her siblings, makes the Jordan family a balanced force. “We all have the same dream; we are a team. I depend on them to ground me in reality!” she says. Two years ago, the family came up with the idea of creating a mobile farm stand. Bill soon bought a retired school bus at an auction, Penny organized a troop of children to paint a bucolic mural over the yellow exterior, and the mobile market was born. “The Partridge Family Bus,” as Jordan calls it, brings vegetables to retirement homes and office complexes for customers who lack transport or whose busy work schedule makes grocery shopping difficult.

Jordan also employs resourceful strategies to ensure that none of the farm’s food goes to waste. She has fostered relationships with public school cafeterias, food pantries, and soup kitchens, and the farm supplies them with excess produce or vegetables that might not sell at market rate. To her, these projects are vital not only to her business but to her larger mission as a farmer. “That’s why we’re here. We’ve got this land, we’re growing food—it’s to share with everybody,” she says.

Nationally acclaimed nutrition advocate and Cape Elizabeth resident Meg Wolff is a patron of local farms. Aside from supporting the local economy and cutting down on the fossil fuels used for transport, she loves farm-stand vegetables because, quite simply, they taste better. “You can taste the difference with food straight from the garden. I don’t feel the need to put stuff on vegetables when they’re that fresh,” she explains. Delicious produce makes healthy eating enjoyable, rather than tiresome. A two-time cancer survivor, Wolff attributes her remarkable recovery to her conversion to a plant-based diet 12 years ago. The steady need for vegetables also required a lifestyle change. “When I first started going to the farmers market, I felt like I was living in Europe—shopping every couple of days, always fresh,” she recalls.

However, to eat vegetables straight from the ground is a luxury many Americans do not have. Vast, monocrop fields owned by large corporations dominate America’s agricultural regions and most of the existing produce market. “If you were to live off of what was grown in Iowa you would basically be eating corn syrup,” says Martha Putnam of Farm Fresh Connection, a distribution company for farms throughout Maine. Yet, thanks to our state’s rugged landscape and its distance from most of the country’s major agricultural centers, Maine farmers have not had to fend off large-scale corporate agribusinesses. One has to know the fields here to work them, and most Maine farmers will never get rich from their work.

Despite these obstacles, Mainers have long taken pride in their ability to sustain themselves and others from the land. Today, the state is lucky to have resources such as the renowned Maine Organic Farmers and Gardeners Association, a statewide network of tenacious farmers, and a growing number of customers who support them. From spring through fall, farm stands decorate roads throughout the state, and Maine’s farmers peddle everything from ripe berries to grass-fed beef to honey still on the comb to eggs gathered that very morning.

It’s a Thursday afternoon and Jordan’s Farm Stand is buzzing. The dirt parking lot outside of the barn-style market is jammed with cars, and patrons filter past the flower gardens and weave through parked tractors on their way to the front door. Inside, customers fill canvas bags and wicker baskets from aisles teeming with plywood crates. Chatter fills the air—neighbors catching up, friends comparing recipes, and strangers sharing moments of indecision, overwhelmed by the extensive selection of leafy greens.

Jordan’s melodic, husky voice rises above the clamor from behind the cash register. “I hope you didn’t get bored standing, all I see is the long line snaking,” she says to an elderly woman approaching the counter. Jordan’s Chelsea-style haircut and love of flamboyant colors complements the energy she brings to the room. “I know: we could sing a song to make time pass!” she announces, without missing a beat in her price-punching rhythm. A woman farther back in line laughs in a way that indicates that she has, perhaps, witnessed Jordan’s singing.

Customers greet Jordan by name, and some recall when her father stood behind the same register. Peter Rich rolls his eyes when asked why he shops here. “Why not? It’s local, I’ve known the family for years and years, and I get good food close to home. What more can you want?”

Not all customers are as loyal as Rich. To remain relevant, a farm’s products must be in high demand, carefully marketed, and of higher quality than a supermarket’s. Rather than scouring food blogs or health magazines to stay on top of trends, Jordan reaches out to those around her. “I love hearing what people do with the food. I have lots of friends, seriously,” she says. Her network includes food advocates, chefs, and gourmet vendors. And, of course, she talks with everyone who comes through her door. “It’s all about having conversations about the food…constantly,” she says.

A faded snapshot of Jordan’s mother and father sits near the register. Jordan takes a moment from the whirlwind of bagging groceries and socializing to lift the worn plastic frame. “They’re still watching us—got to make sure we’re doing it right,” she says. With three of her nephews working hand in hand with their parents, and business continuing to grow, it looks as though the Jordan legacy will be carried on for a long time to come.