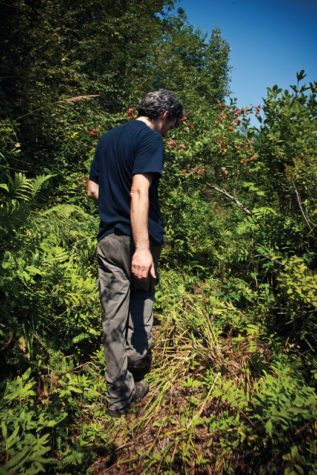 The singer-songwriter, not far from his primitive camp near Cherryfield. 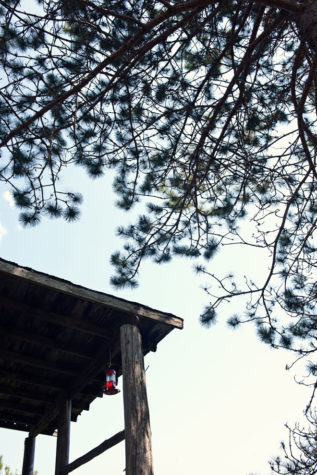 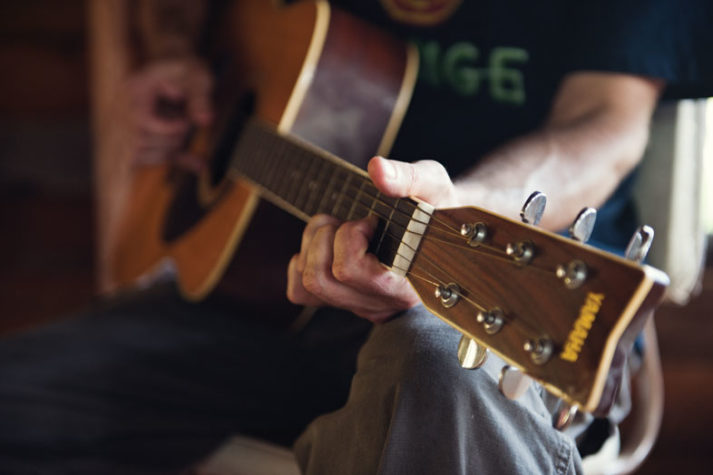 Says Cleaves, "We do a lot of manual labor up here: hauling water, building a road, and just relaxing, too." 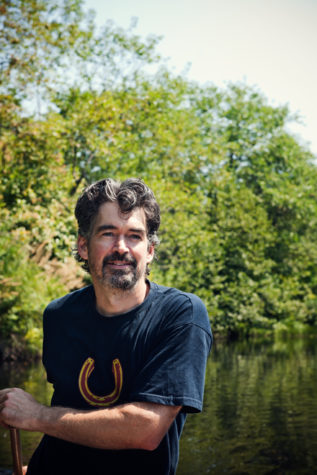 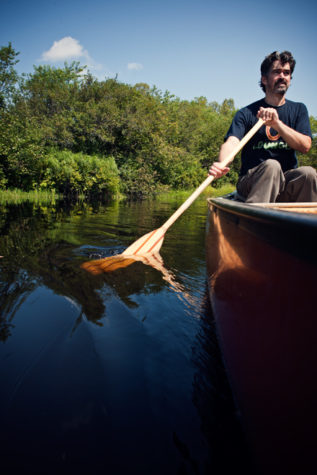 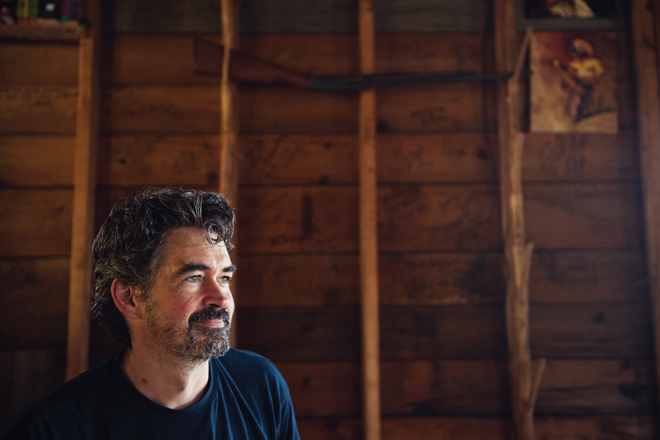 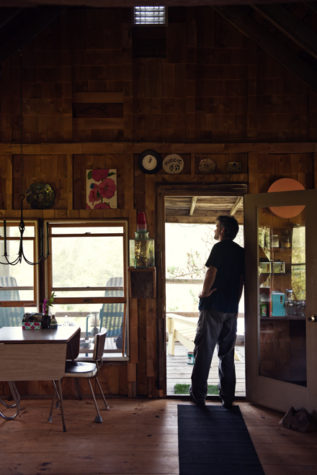 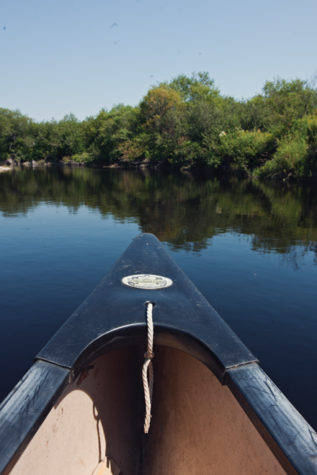 Cleaves's camp on the Narraguagus River is best reached by canoe.

Texas may claim him, but singer-songwriter Slaid Cleaves can’t stay away from Maine. At his remote downeast camp, Cleaves gets back to nature, remembers his roots, and recalls the start of it all, at Portland’s Three Doors of Hell.

For more than two decades, Slaid Cleaves has returned to his home state every year to rejuvenate, reconnect, and get inspired. In the summer, the Texas-based musician abandons his hectic schedule for the peace and quiet of a primitive Maine camp, where the nearest town, six miles down the Narraguagus River, is Cherryfield, the blueberry capital of the world, population 1,232. “It’s definitely good for my soul, that’s for sure,” he says of his annual respite. “There’s something about the landscape and the vegetation, the scenery, the people, and the accents here—no matter how long I’m away, this is what feels like home.”

After 22 years away, his voice is more soft southern drawl than weathered northern salt, but it is clear that, while you can take the man out of Maine, you can’t take Maine out of the man.

At his camp, Cleaves and his wife, Karen, live off the grid without electricity or running water. Their camp is reached by canoe, and the couple has learned to live in harmony with unpredictable wildlife, such as the beavers that sometimes dam up sections of the river overnight and block the way into town. “I have developed this great appreciation for keeping life simple and conserving resources,” he says. “You can’t just turn on the tap water and let it run until it gets hot. You’ve got to go down the river and get water and then sit it in the sun for hours to get it warm.”

This rustic idyll is a far cry from where Cleaves got his musical start: the raucous bars of Portland’s Old Port.

In the late 1980s, a trinity of dives on Commercial Street catered to off-duty lobstermen and rowdy regulars: the Range Light, the Sail Loft, and Angie’s. It was in the latter where Cleaves, fresh from South Berwick, could be found playing cover songs every Monday night. “None of them are there anymore. They were kind of rough places right across from where the fishermen came off the boats. It was known as the ‘Three Doors of Hell,’” he says. “And Angie’s was the third door.”

Angie’s was the colorful sort of place where a man would buy the whole room a drink—a gesture of largess and camaraderie Cleaves had never seen before and has not seen since.

Over time, Cleaves attracted attention and ditched cover songs in favor of his own melodic country-folk arrangements. By 1991, he had gathered a faithful following and felt ready to test his talent on the wider world. Leaving the comfort of his fan base behind, Cleaves headed south to Austin, Texas, the capital of alt-country, where he was “a very small fish in a big pond.” Starting from scratch, he played open mics just as he had in his Old Port days. Times were so lean, he confesses, that he returned to Portland every year to earn money playing some of his old gigs. But Cleaves worked hard, and Texas was kind to his career. In 1992, he won top prize at the prestigious Kerrville Folk Festival (past winners include Lyle Lovett and Steve Earle), and in 1997 his album No Angel Knows earned him national acclaim. The wildly popular Broke Down (2000) followed, an album Sing Out! magazine said was “crafted to fit him as well as a favorite pair of jeans.”

Cleaves is a roots musician who has stayed true to his roots. Rod Picott, an old buddy and member of Cleaves’s garage band in high school (dubbed the Moxie Men, after the piquant Maine soda), remains a songwriting partner. While on tour, Cleaves often calls on other New England musicians, inviting gifted locals such as Mark Cousins, another founding Moxie Men bandmate, and Duke Levine, the popular Boston-based Telecaster guitarist, to share the stage.

Among his fans are two of Maine’s most prominent writers: Nicholson Baker, fellow South Berwickian and author of the controversial novels House of Holes and Vox, and Maine’s own master of the macabre, Stephen King. After hearing Cleaves’s music on XM Radio, King approached him with a standing offer to pen his liner notes. Cleaves took him up on it for his most melancholy project to date, Everything You Love Will Be Taken Away (2009). The elegiac album is complemented by King’s preface, in which he writes “…my life would have been poorer without him.” The author’s admiration is not surprising, given Cleaves’s natural affinity for life’s darker side. Some lyrics, most notably those of “Temporary,” were inspired by epitaphs on tombstones the singer regularly passes on his jogs in Austin.

Cleaves’s voice is a clear tenor with a hint of grit. Onstage and in photos, he looks handsome and earnest and could easily be mistaken for a character in one of his own songs: a guileless local boy who grows up, tries hard, makes good. Yet instead of falling on hard times, losing the girl, or even losing his life (the way so many of his characters do), Cleaves managed to escape the cycle of small-town blues and prevail.

Still, one is struck by his awareness of life’s transience. He is not a man who takes things for granted—whether it’s warm bathwater, the health of his family, or the trappings of success. The songs on Everything You Love Will Be Taken Away underscore the songwriter’s hesitancy about coasting, boasting, and resting on one’s laurels. “When I started writing that record, I had everything I’d ever dreamed of,” he says. He cites his blessings: a wonderful relationship with his wife, the health of his parents and siblings, and even his dog. “I just knew that, from now on, these things are all going to fade away, one by one. It might be in a few years or it might be in a few months, but it’s going to happen. I looked around and realized that I had it really good, and that the only way to go from here was down.”

The lyrics of “Cry,” which give the album its wistful title, echo this sentiment:

Every bond is a bond to sorrow
Your blue sky turns gray
Everything you love will be taken away.

Although ominous, the words feel more like a reminder than a warning: look around, take stock, savor, and appreciate what you have. Taking a break at his downeast retreat before a tour that will traverse the United States and the United Kingdom, Cleaves seems to be doing just that.

For now, nothing is being taken away, and the fall will be a busy one. On October 9, local fans can catch him at Jonathan’s in Ogunquit. Both here and abroad, Cleaves will be promoting his latest effort, Sorrow and Smoke: Live at the Horseshoe Lounge (2011). This double album offers fans 21 of his best tunes and an intimate, acoustic experience—complete with Cleaves’s comfortable, charming banter, the audience’s singing, and beer bottles clinking. The Horseshoe Lounge is just the sort of honky-tonk watering hole that might once have fit right in, here in Portland, perhaps as the fourth Door of Hell. No wonder Cleaves feels so at home.