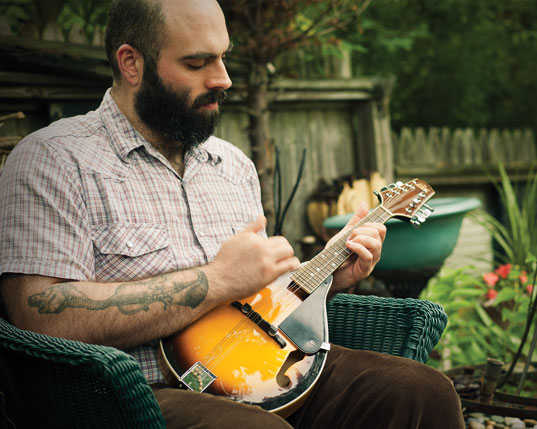 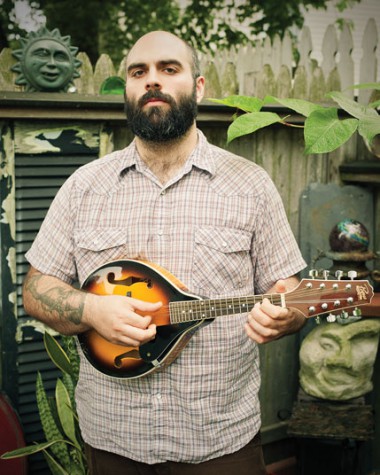 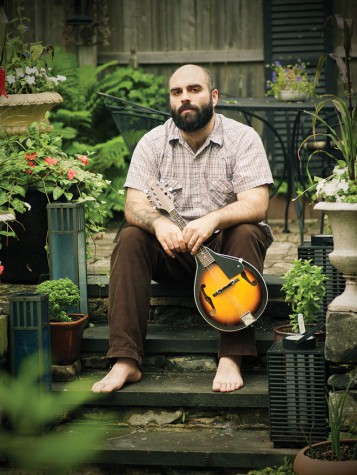 "I worry about the state of the planet," Augustine says. Music, for him, is a form of political action: "I want to inspire people."

Jacob Augustine: Portrait of the Artist Falling from the Sky

A native Mainer, Jacob Augustine is a restless soul with big dreams: to protect the earth, make extraordinary music, vitalize his community, and skydive whenever he gets the chance.

Certain musicians make me forget they are human. They create such a powerful effect with their voices, and cut such a striking figure on stage, that I start to forget I’m dealing with a person. I listen. I become entranced. I experience that uncanny merger of self and sound. Apply whatever cliché fits: butterflies in the stomach, goosebumps on the arms, hair standing on end. Do my eyes get wide as saucers? Do chills run up and down my spine?

It’s no accident that all these clichés are bodily—transcendent music goes straight to the gut. It is corporeal rather than cerebral. It’s a punch, a slap. Or it’s the gentlest touch. And it seems to hold no association with the petty, hurried, cynical world in which its maker lives.

Jacob Augustine’s music is, by this definition, transcendent. His songs are gorgeously tender, raw, full of throaty urgency and wisdom. They make you suspect their author has somehow been granted an exemption from the dull routines and daily complaints that hound the rest of us. The pathos and beauty in his music led me to expect a sage of sorts—someone with the mysterious knowing glow of, say, a Zen monk or a young Dylan. Someone who perceives the world with unusual accuracy and clarity of vision.

You might share this feeling if you heard Augustine at the State Theatre in 2010. If you saw his solo performance of “Hallelujah Banks” at the Mayo Street Arts Center, you know what I’m talking about. The husky yet crystalline voice, the seemingly unfiltered emotion, the songs that feel like public struggles to make sense of a savage world. If you’ve seen him perform, you might, like me, suspect that Augustine floats in some pristine upper atmosphere.

But you’d be wrong. Because there is no upper atmosphere—that’s the illusion great artists create.

Augustine lives in this petty, hurried, cynical world too. He drinks coffee and has moods and argues with people. He’s got the voice of an angel (to use another cliché), but he lives on terra firma. A tall man, broad shouldered, dark-eyed, he’s got the full beard of a deckhand in Moby Dick and a face that offers no apologies. He’s only 30 years old, but you can’t see the former child anywhere on him. And when he talks about the poisoned earth, about his struggles with sadness, his poor sleep, his choice to get sober, his disappointments, his failed relationships, or his political grievances, you understand that extraordinary talent doesn’t remove a person from the gritty world—it fixes him squarely in it.

No, he’s not a sage. He’s much more interesting than that.

Augustine grew up in Lincoln, population 5,000. In seventh grade, he took up bass and started playing heavy metal with his buddies. He had some success in the industry, touring the United States from 1999 to 2004 with Red Cloud Revival and Donnybrook. Then, burned out on the hard sound, he began writing songs on acoustic guitar. In 2008, he independently released Harmonia, his first solo album. The following year, while living in Los Angeles, he hired a band and recorded his second album, Frontier. Months later he moved to Portland and enlisted an eclectic, talented group of musicians to perform the still unreleased Frontier songs, and Jacob Augustine and the House of Fire was born. The group riveted crowds. The Portland Phoenix wrote: “If Jacob Augustine didn’t exist in Portland, it would be necessary to invent him. Possessing the stage presence and integrity of a firebrand preacher (except without all the answers), Augustine commands urgency and attention. His nine-piece misfit gospel band blends the Western-Baltic flourishes of Beirut with the post-punk immediacy of World/Inferno, but it’s the unadorned earnestness of the man himself that binds it all together.”

Can we get an amen?

But it didn’t last long. The House of Fire disbanded in 2010, and now Augustine’s on his own again. This fall, he’s planning to release three albums: The Original Love, Goldyhyms, and at long last, Frontier.

It’s been a long haul, he tells me, and he’s lost friends along the way. He admits people often have a hard time with him—he expects a lot from his musicians and friends. He doesn’t mince words, won’t stand by passively and watch a friend self-destruct. “I’ve lost friends because I care too much,” he explains. He carries himself like a man alone in the universe, and he seems resolved to isolation.

Augustine has released only a small amount of his work. He says he has no interest in promoting himself anymore. He’s done with the industry, and done being at the mercy of “other people’s egos.” He’s tired of waiting for someone to “come down from on high” and tap him on the shoulder. So he’ll make music, share it online, and let people find it. He hopes they will. And he hopes they like it.

When we spoke, Augustine was in the process of moving from Portland back to Lincoln. He spoke about his homecoming with a mix of exuberance and anxiety. On one level, moving home seems like an escape—a way out of a social scene that depletes and overwhelms him. But on another level, the move is an empowered, eco-conscious, think-global-act-local gesture. He’ll live with his family, care for his grandmother, make music, grow food. He wants to live a more humble life in a place where “no one’s trying to outdo someone else,” where people are “happy doing simple things.”

It makes sense that a simple place and simple things call to him. Life, it’s clear, isn’t simple for Augustine.

There’s a restless, emotionally driven political consciousness in the artist. His eyes flashing, jaw set, he decries corporate exploitation. The biggest problem facing the earth, he says, is “the reliance of human beings on the powers that govern them.” He is suspicious of the industries that control our lives, balks at political identifications and the names we give to them—Democrat, Republican, socialist, communist. In his mind, these labels are just another means of separating people, another excuse to fight. For Augustine, music is the way to inspire people and raise awareness. He feels compelled to tell stories about the brutality of the world so we can understand what we need to change.

If you haven’t picked it up by now, I’ll say it clearly: Augustine is a worrier. He’s a restless soul. He’s hoping he will find more peace in Lincoln. To date, he’s sought out a sense of peace during live performances. After a show ends, fans often want to hang out, buy him drinks, but he usually declines. Not because he doesn’t like his fans—he does. He’s grateful for their connection to his music. But peace, for Augustine, is hard to come by. “I’m so emotionally riled up when I play…I start to decompress…I feel at peace afterward, and I have to hold on to that.” So no drinks. No socializing with fans. This isn’t artistic posturing, not some too-cool stance. When a person finds tranquility to be so fleeting, he’s reluctant to squander it.

But the stage isn’t his only refuge.

Recently Augustine had a transformative experience: he went skydiving. To his surprise and delight, jumping out of a plane recalibrated, thrilled, and calmed him. “There was no fear,” he says, astonishment in his voice. “It took me out of the world a little while. It was beautiful, unnatural. I felt close to God….Even now, when I feel down, I just look up at the clouds. I picture myself flying there. Then I laugh.”

He shakes his head, grinning. His eyes go to the ceiling. I picture this big man, this restless man, suspended in the upper atmosphere. I picture him high above the spinning earth, laughing, before he falls.