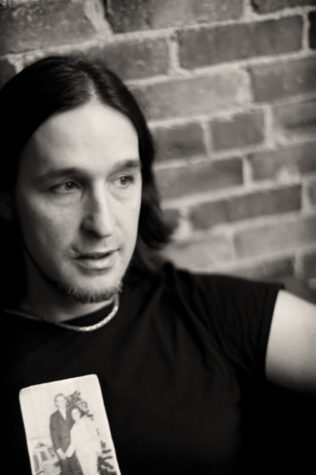 Portland-based musician Sean Slaughter of  the rock band Clubber Lang entered and soared to the finals of the Queen Extravaganza competition. At the beginning of December, Maine magazine sat down with Slaughter just before he left for Los Angeles where the live audition was held. Though he was not ultimately selected to join the Queen Extravaganza tour, Slaughter made waves in California and garnered a lot of support from his home state.

How did you learn about the Queen Extravaganza competition?

Tuesdays are my days off, when I just sit around in my pajamas and relax. On the Queen Facebook page one Tuesday, I saw a post about the competition and thought, “Wow, it would be really cool for Roger Taylor to hear me sing a Queen song.” I ran up to my studio, recorded two takes of “Somebody to Love,” and picked what I thought was the better of the two. Queen is my favorite band. Always has been. A couple days later I went back to the Queen Extravaganza website and looked at the video. It had about 80,000 views. Within a week it was up to 100,000 views; it’s at around 205,000 views right now.

When did you first hear Queen’s music?

My family moved from Brooklyn to Maine when I was about seven. Soon after that, my older cousin Howie came to live with us for a little bit. He brought his record player and his record collection. He was a teenager of the 70s so he had a black light and one of those fluorescent posters with the planets and stars. He’d turn on the black light, turn on the record player, and put on a little show for my brothers and sisters and me in his room. When Howie’s A Night at the Opera record got scratched he gave it to me. I literally listened to that record until I wore the grooves out.

What about that record spoke to you as a kid?

It’s just such a majestic record. And then there’s the scope of the music that it covers—everything from really campy 20s- and 30s-style music all the way to heavy metal. It was just such a weird amalgamation of styles and influences. I’ve got four sisters and two brothers, and they got sick of Queen growing up. I’d be in my room cranking it all the time. It got to the point where I knew every nuance of every song from Queen’s first record to their last. They were my idols. That’s why this is so cool for me, to be able to express that through this competition. I don’t want to be that nervous, psycho fan, but I’m definitely looking forward to meeting Roger Taylor, shaking his hand, and telling him that his band is the reason I’m a musician today.

What do you think sets you apart from the other finalists?

Ever since I was a little kid I loved music, loved dancing, loved flipping out. When I get on stage I like to entertain. If I’m going to have any kind of edge in the finals it’s going to be that.

Tell us about the band you play with, Clubber Lang.

We’ve been playing for a few years. We recently opened for Sebastian Bach at a sold out show. The Asylum was packed with people that like rock, and they loved us. The Queen gig is awesome, but I’d really love to help make some good things happen for my band. Clubber Lang is made up of incredible musicians, some of the best I’ve ever heard play.

How has the community shown their support throughout the competition?

Throughout my adult life as a musician I’ve been on the outside looking in. I just didn’t think people cared that much. But to see all of that excitement and to get all that support from people has meant a lot. It’s made me feel really good.