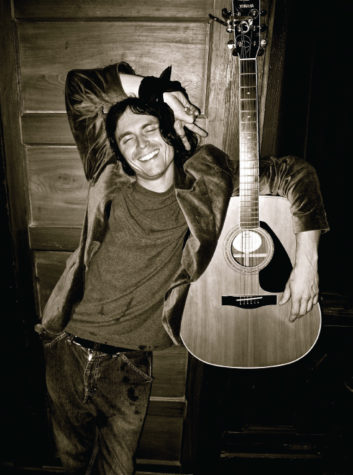 Eric Bettencourt is a man who lives by a familiar idiom: If you want something done right, do it yourself. When the time came to record his first album a few years ago, Bettencourt saved up, purchased the necessary equipment, and learned to record himself. His latest album, Secret Songs for Secret People, features his crackly vocals overlaying a kaleidoscope of supporting sounds. He shrugs off compliments. “I’m just one of those people who has to figure everything out on his own. Not because I love being in control, I just don’t like being let down by other people.”

Cut to Bettencourt at age 13, saddled with his fair share of teen angst. Guns N’ Roses, delivered on tape through headphones, was his escape. “There was so much light and darkness and texture to that music.” His own compositions and recording techniques replicate this multifaceted sound. Each instrument maintains its intrinsic character—squeaks and gasps escape from guitar strings between clean plucks and strums. Secret Songs for Secret People is a little bit blues, a little bit rock, and a little bit folk. More importantly, it’s a tight, intricate album that showcases both the mastery and emotional depth of its maker.

Bettencourt is wound up. Not uptight, but energetic, wiry, compact. He radiates a sense of determination that makes him someone you would be both hesitant to fight and eager to befriend. He tells me that he likes to be busy, needs to be busy, but that he’s always craving quiet space to create in. He explains that stress begets songs, and—in the same breath—that songs materialize when he slows down. The take-home point is that life is full of contradictions. It’s also a balancing act, and a difficult one. The modern musician must be part artist, part businessman, and part marketer. Bettencourt teaches guitar lessons, plays weddings with his band Velourosaurus, and occasionally records other local musicians. And while he doesn’t exactly relish the life of a Renaissance man, he is certainly up to the challenge. His talents are innumerable, and his work ethic is truly rare. “When I get into a project the blinders go on and I don’t see a thing until it’s done,” he explains. If that’s Bettencourt talking heads up, tails sounds like this: “I’m just now getting around to understanding how important it is to watch the paint peel and stare at the sky.”

Bettencourt is looking to focus his seemingly boundless energy on writing and performing his own music. His innate longing is both his foil and his great fortune. It pushes him ever forward, resonates in his voice and in his lyrics, and pervades and defines even his more light-hearted tracks. The song “Furious Pace” is upbeat, but the lyrics reveal a deep-rooted desire: “Will I ever find, some semblance of a quiet mind? I try to get off this grid. I dig and I dig and I’m pulled further in.” Who hasn’t dealt with conflicting desires? Who isn’t a little frustrated? Eric Bettencourt’s singing our common song. And thank goodness because where would we end up going if we didn’t have our sights set on the next thing?