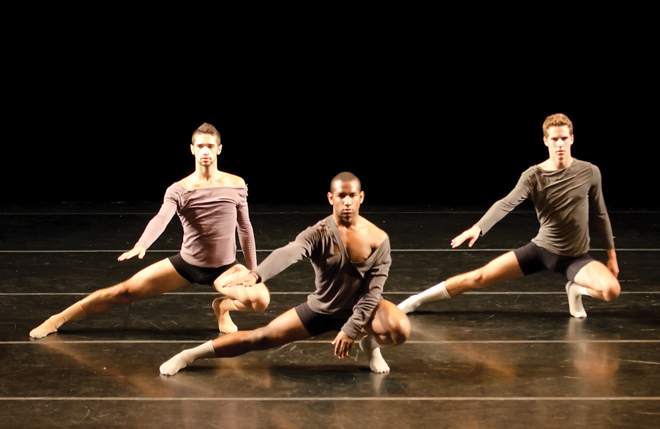 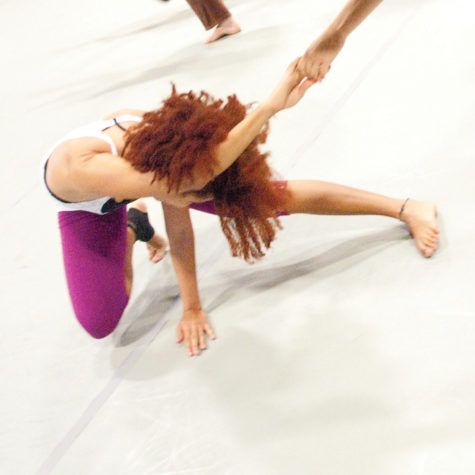 Dance company Zoe | Juniper presents "A Crack in Everything" in 2011. Formed by a choreographer and visual artist, the company combines dance and multimedia to evoke a richly felt experience.

For a few months every summer, hundreds of dancers flock to Lewiston, where the Bates Dance Festival has created the perfect alchemy of inspiration, dedication, and perspiration. Preparing to celebrate its thirtieth season, the festival’s founder, its longtime director, and a veteran dancer provide a glimpse at what goes on behind the curtain.

When I was a girl, modern dance was no more than a photograph. To be precise, it was a black and white photograph of Martha Graham, pitched forward hand to head in that iconic, melancholy swoon, her marvelous dress sweeping behind her like a fan. It was the tale of Isadora Duncan being strangled by her own scarf in the wheels of a convertible car. Modern dance seemed, in short, archaic, and perhaps even dangerous to your health.

Like many young girls, I dreamed of becoming a ballerina. I was enrolled in dance classes at the age of four (pink tights, black leotard) and faithfully studied tap, ballet, and jazz—that standard formula of suburban dance schools—until my late teens. Even through the indignity of rinky-dink dance recitals and the ravages of puberty, the dream endured: one day, in a tutu and toe shoes, I would dance a chain of bourrées across a New York City stage. The ballets I loved were based on storybooks like Sleeping Beauty and Cinderella. But as with most girlhood fantasies that are based on fairytales, the dream inevitably evaporated when I grew old enough to realize how few aspiring bun-heads ever get their prince, much less a contract with New York City Ballet.

Perhaps things would have turned out differently had I dreamed of becoming a modern dancer. In modern dance, choreography is based on the body’s core rather than the dancer’s feet, prizing natural movement and emotion over formality or a perfect turnout. Modern dance appears, at least on the surface, to be a democratic art form more willing to embrace diversity—whether it’s a variety of movement or body type. (Some might even say controversy, given that Isadora Duncan, the reputed inventor of American modern dance, once shocked the establishment by dancing barefoot and, in at least one instance, bare breasted.) Had I known the pleasures and freedom of modern dance, I might have been inspired to pursue my dream a little longer. It never occurred to me—in the strip-mall studio where I practiced shuffle-ball changes and pliés—that modern dance was a living, breathing art form.

Thankfully, the Bates Dance Festival is here to help set the record straight. Lewiston, a former manufacturing city, may seem an incongruous destination point for contemporary dance, but due to the Bates Dance Festival, it is just that, attracting dancers from all corners of the globe to live, train, and create each summer on the Bates College campus.

The festival was founded in 1982 by Marcy Plavin, an emeritus professor of dance at Bates College, and local dancer Frank Wicks. It started off with just 44 eager dancers in attendance, Plavin remembers. But she wagered that the festival’s well-known instructors and the beauty of Maine summers would prove to be irresistible, and she was right. “Dancers are funny,” Plavin says. “What they care about is who is teaching—that’s the most important thing. They will go anywhere for the teacher they want.”

“Study with the best” is the festival’s motto, and since its inception, both famous and up-and-coming teachers and performers have delivered on the motto’s promise. What started small quickly grew into a program of cultural importance. Plavin remains an active member of the festival board, and she gives credit to Laura Faure, the director since 1987, for turning the festival into a multifaceted, internationally recognized event.

Today, the Bates Dance Festival spans the summer and is comprised of four programs that host more than 360 dancers who come from all over the country—and the world—to train with top-tier instructors. The first six weeks are dedicated to two training programs before the festival officially commences with the Presenting Series—a program of main-stage performances that, year after year, gives audiences the opportunity to see some of the brightest stars in contemporary dance. It concludes with community-outreach programs that give local residents the opportunity to rub elbows, or point toes, with the best the festival has to offer.

The Professional Training Program runs in July and August, offering classes, workshops, and lectures to 190 students in disciplines that range from Middle Eastern and African dance to the more traditional disciplines of jazz, ballet, and modern. It caters to dance majors, professionals, and instructors ages “18 to 80.” In addition, the Commission and Residency projects fund and support new works by established companies and emerging choreographers.

To promote greater cultural diversity, the Bates Dance Festival introduced the International Visiting Artists Program in 1994. It has since hosted artists from a wide range of countries, including Africa, South Africa, Mexico, Japan, China, Hong Kong, India, and Vietnam.

From the start, Plavin decided to keep the festival essentially audition free—a true rarity in the highly competitive dance community, where even summer workshops can be rife with careerism and competition. To further enhance the communal experience, resident artists and students stay in the college’s dormitories and eat together in the dining room. “We believe that creative people thrive much better in an environment where everyone’s working together and sharing ideas, and there’s dialogue and space for experimentation,” Faure says. “People respond so positively in that environment. They thrive in that environment.”

Keigwin first attended the festival more than 20 years ago—first on scholarship as a dance student, then as an emerging choreographer, then as a company dancer, and, finally, to perform with his own company. This season, Keigwin and Company performances will be at the center of the thirtieth-anniversary gala. Keigwin’s progression from student dancer to choreographer to artistic director is just the sort of professional trajectory festival organizers hope to nurture and encourage.

“He literally has come in every conceivable guise…,” Faure says. “Every role, Larry has had his feet in.”

After studying in the Professional Training Program, Keigwin joined the company of Doug Varone, one of the festival’s regular instructors. He later attended the festival on an emerging choreographer fellowship, during which time the program commissioned his first work. Not long after, he founded Keigwin and Company with fellow festival alum Nicole Wolcott. It not only appears that Keigwin has had his feet in every role of the festival, you could also say that the festival has played a part in nearly every step of Keigwin’s career.

Growing up in the suburbs of Long Island, New York, Keigwin learned how much he liked to dance after he was cast in a production of “My Fair Lady” in high school. He was a self-professed “club kid,” who naturally gravitated to New York City in the early 1990s. His first professional job was as a back-up dancer on Club MTV. Technique and discipline didn’t come until later, when he studied dance at Hofstra University. But this cart-before-the-horse training hasn’t seemed to hurt him one bit. In fact, it may be the very thing that makes his dancing and choreography so fresh and infectious. The combination of club-kid moves and killer technique gives way to everything from vogue-ing to the perfectly executed triple pirouette, making his work witty and irreverent, at once accessible and unexpected. When casting for his company, Keigwin looks for both technique and charisma—that ineffable combination of personality and stage presence that certain performers just seem to be born with.

With a career that spans MTV to Broadway to New York’s Fashion Week, Keigwin, now 40, finds inspiration in just about everything, whether it’s the ocean or architecture or the vibrant, frenetic street life of Manhattan, where a pedestrian’s outfit might influence his choice of costume or a couple arguing on the street becomes an aggressive pas-de-deux.

“A lot of what I do is about building collages,” Keigwin says. “When I find something that inspires me, that enters the collage. I also love looking at human nature and drawing comparisons to animal behavior.”

Animal behavior is certainly at the heart of his dance, Natural Selection, which takes its title from Darwin’s familiar theory. The New York Times called it “an exhilarating force of nature.” It will be performed along with three other works including Trio and Triptych, which are all making their Maine debut.

For newcomers to modern dance in general, and to Bates Dance Festival specifically, what would Keigwin want them to know? “That modern dance is contagious,” he says, definitively. “And that it should not be missed!”

Started in 1996, the Young Dancers Workshop has become a popular part of the program, attracting students from ages 14 to 18 to train in modern dance, ballet, jazz, and improvisation. Modeled upon the original training program, the workshop now enrolls 100 dancers for three weeks in June and July, providing them with housing, meals, and classes. It realizes one of the festival’s goals: to offer a variety of high-quality instruction to aspiring dancers.

Other festival initiatives, such as the Youth Arts Program, provide local children classes in music and dance, while the Community Dance Projects reach out to at-risk youth and people with disabilities to help them create and perform dances alongside established choreographers. Overlapping these programs with the festival is intentional, Faure says, to give children the opportunity to work with an extraordinary range of talented dancers from all over the world.

To celebrate its thirtieth-anniversary season, Faure will welcome back companies like Keigwin’s that have had a long history of support and creativity within the program. Hip-hop pioneer Rennie Harris’s company, Puremovement, will return with excerpts from some of its “greatest hits,” such as Rome and Jewels, a hip-hop rendering of Shakespeare’s star-crossed lovers. Dancer and choreographer Kyle Abraham, named by Dance Magazine in 2009 as one of the “25 to watch,” will bring his company Abraham.in.Motion to perform “Live! The Realest MC,” a contemporary retelling of Pinocchio. Rounding out the program is the Kate Weare Company—whose work Faure calls “deep and nuanced”—which will perform a new work called “Garden” that has been described as “an exploration of the depths of human relationships.”

All of the performances will be presented in the Schaeffer Theatre, an intimate 300-seat venue on the Bates College campus, which is newly-air-conditioned, Faure is quick to emphasize, saying that even in Maine, July and August can be warm. Temperatures notwithstanding, Bates Dance Festival is sure to be plenty hot.

It’s the sort of line-up that would even make Duncan and Graham, those two rule-breaking iconoclasts, look just a tad old-fashioned.