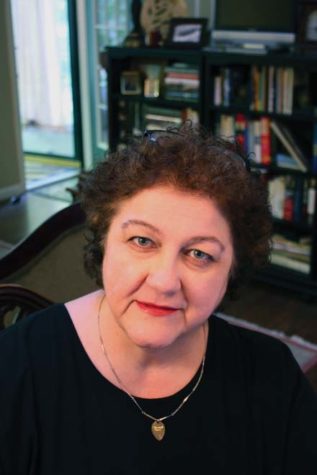 A folk-rock singer and musician, Martha Sterling-Golden is a past president of the Women’s Campaign School at Yale University, and now serves on the advisory board of the Maine NEW Leadership program at the Margaret Chase Smith Policy Center at University of Maine, Orono.

What are some of your earliest political memories?
I was nine years old and in the basement looking at some old musty books. There was this big book of Life magazine’s photographs from all of the theaters of World War II. I opened up the pages to the camps in Europe. You know how you see something and your brain just rejects it? I had no human context for what I was seeing. That was the first what-the-hell moment I had. The second occurred when my cousin Peggy came to visit in about 1966. Her dad was from Haiti, but died when she was very young. She had quite dark skin. My grandmother gave us some money to go get something at a restaurant that my family went to. We walked in and everyone who worked at the restaurant was standing at the counter staring at us. I said to Peggy, “I don’t understand why they’re not giving us a table.” She looked at me and said—and she was about ten at this point—”You probably can’t come in here with me. Sometimes my mother and I can’t go certain places together.” That was the moment that everything I’d been seeing on television about the civil-rights protests clicked in my head. I was just furious. Those two incidents were pivotal. I thought: there are some things in the world that are really wrong and someone ought to do something.

What led you to focus on women in politics?
There have been roughly 12,000 people who have served in both houses of Congress since 1789, and there have been 277 women. Look around: How’s it working out? There have been so many studies about this—we automatically give male candidates more credibility than we do female candidates. They don’t need my help; people are already assuming the men are more qualified. So that’s why I decided to concentrate on women in politics. We’ve tried the one thing. Maybe we should try the other thing.

What’s your Maine connection?
I grew up in Bingham, up in Somerset County, in the 60s and early 70s. Bingham was really a nice town—typical small-town America. I got out the day after graduation. I wanted to move to Boston and play music, so I did. I’d waited so long to live my life as a musician, that’s all I did for a couple of years: play like a mad woman. Finally, I landed in Brunswick. It was great because there were so many live-music venues here. I lived within staggering distance of half a dozen gigs. It was the best place I could have landed. I have really considered it home ever since.

Is there anything else you’d like to share with our readers?
I was about to join the board at the Women’s Campaign School, and it was something I’d never considered possible when I attended in 1995. I didn’t have a degree, and the other women were lawyers, corporate people from Connecticut—you name it. I wondered what I was going to bring to the table, how I was going to help improve things. Well, Odetta [Holmes, the American singer, songwriter, and human-rights activist] played on my birthday that year at the Chocolate Church Arts Center in Bath and my friend gave me one ticket. Odetta came out—and she was just a regal, amazing woman, even though she wasn’t in good shape at that point. Her piano player started, but she shushed him and said with some gravity: “I want to say something to my sisters in the audience. You do not do your sisters any favors by pretending to be less than all you are.” And then she said it again. And then she started singing.