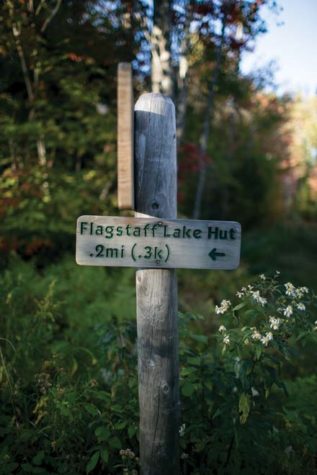 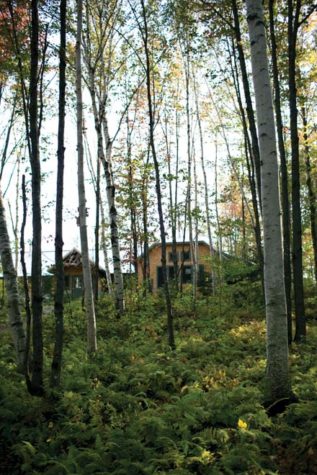 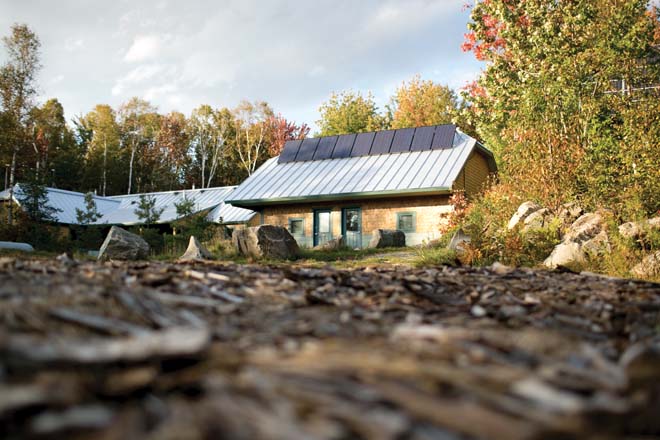 Flagstaff Hut, the second and most popular of four huts, features stunning scenery plus the famous Flagstaff Lake for swimming, canoeing, and kayaking. 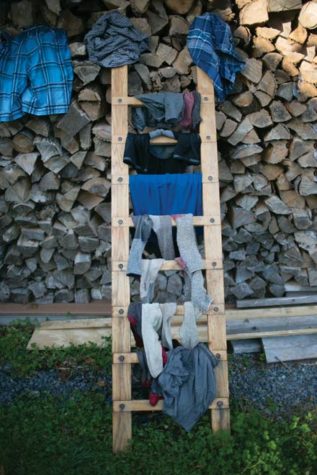 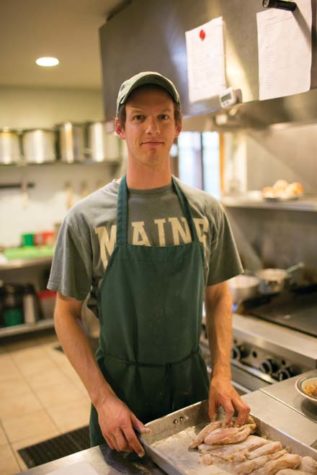 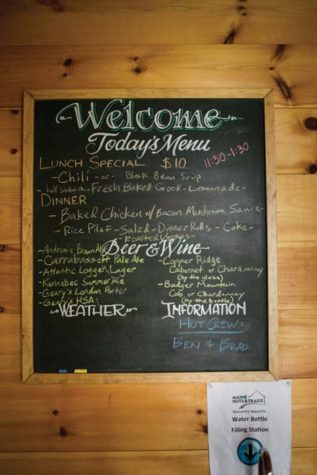 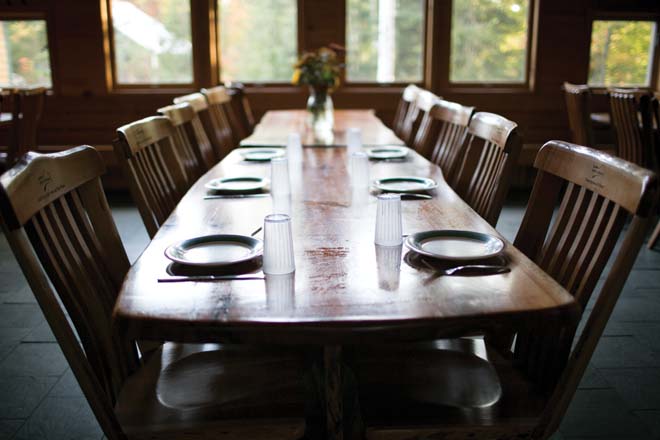 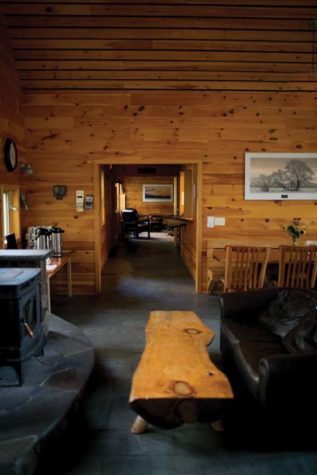 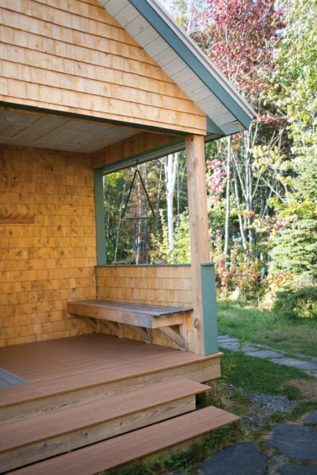 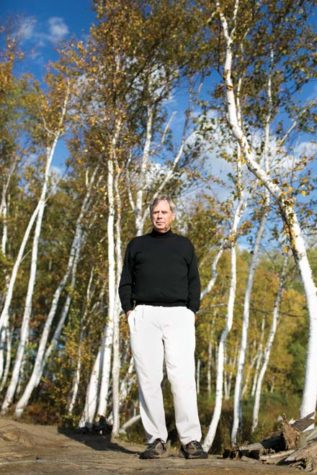 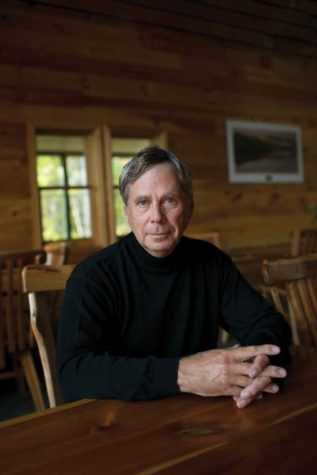 Larry Warren arrived in Maine expecting a weekend away; he ended up shaping the region in innumerable ways.

From here on, your life will never be the same.

I have heard from various people that Larry Warren is a visionary. A natural leader. That he spearheaded a massive mission to turn Sugarloaf Mountain Resort into the vibrant year-round destination it is today. That he founded Maine Huts and Trails, a groundbreaking hut-to-hut trail system designed to bring eco-tourism to western Maine. And I was also told that Warren did crazy things, big things, that he spurred people to action. I dialed his number, expecting a powerful voice. But on the phone, Larry Warren sounds like a mild-mannered man. His voice is calm, soft, full of pauses, even a little remote. The voice didn’t mesh with the guy I had been told about. I felt a flicker of concern—would it be like pulling teeth, this interview? There’s nothing worse than a reluctant subject. But then I met him. When I experienced that strong handshake, saw the intense, vivid eyes, heard the husky laugh, I thought: oh yes, this is a man who accomplishes big things. The background: Warren, a native of Northborough, Massachusetts, was a child of the 1960s. While studying accounting at Bentley College in Boston, he found himself immersed in the music scene, inspired by jazz and rock, surrounded by artists and musicians. As a new CPA in Boston, he spent weekends skiing and taking in live music. On a whim, he visited Sugarloaf, discovered the Red Stallion Inn, a now-defunct inn and nightclub. He skied all day, listened to music at night, and became close with the Red Stallion’s owners, Ed and Frank Rogers. He kept coming back, “met incredible people from Kittery to Fort Kent,” and finally quit the Boston gig. Through a fortuitous twist of fate, Warren landed a job as controller (and later president) of Sugarloaf, and settled happily into the tiny community (the year-round population, back in 1971, a mere 26 with an average age of 25.) He spent nights at the Red Stallion drinking beer and playing cribbage. At this point, he was living in an unorganized territory (“It was like the wild west”), until he helped lead a movement to incorporate the territories of Jerusalem and Crockertown into the township of Carrabassett Valley. In other words, Carrabassett Valley didn’t exist—not as a name on a map—until Warren moved to town. Over the decades that followed, he befriended senators, governors, lawmakers, movers and shakers in Maine and elsewhere. He negotiated with governmental departments and untangled bureaucratic red tape the way James Bond might pick a lock—cool, calm, deliberate. He made people trust him. There were big challenges, too—including, in 1986, financial woes that took him from his leadership role at Sugarloaf. He “was crushed” by these setbacks yet remained committed to the community, an advocate for Sugarloaf through and through. Today, after successes and setbacks, after tireless work, after Churchillian political maneuvering, one of Warren’s long-held (and long-deferred) dreams is coming true. Four decades after the idea first came to him, Maine Huts and Trails is at last a reality. Inspired by the Appalachian Mountain Club’s hut system, Warren first tried to raise funds for a hut-to-hut trail system in the 1970s. He envisioned a comprehensive cross-country ski touring center, and so he formed a nonprofit—The Western Mountain Corporation—to help make it happen. But he met resistance. At the time, Maine’s laws ensured public access to privately owned lands. “For a hundred years, there was a benevolent relationship between Maine land owners and the public,” he says, which meant the huts project was perceived as unnecessary. Every five or so years, Warren tried to muster support, with no luck. Then, in the 1990s, Wall Street analysts realized that paper companies were sitting on undeveloped land that had undisclosed balance sheet value: “In turn, paper companies sold land to investment companies and timber investment organizations,” Warren explains. “It became obvious to many that continued public access to private land was in jeopardy.” Full of precious natural resources, Warren knew all too well how valuable the land was, but that if it didn’t have value beyond those natural resources—if it didn’t offer people something lasting that warranted protection—it would inevitably be exploited. His goal: conserve the land while simultaneously creating new economic opportunities. And so, armed with detailed information about threatened access and the potential for exploitation, he again brought his mammoth energy to generating community support for Maine Huts and Trails. Finally, people paid attention. When the Appalachian Mountain Club offered to finance the project—a deeply tempting offer—his resolve was tested. Support from the AMC meant potentially significant profits would leave the state, since the AMC’s primary fidelity is to its Massachusetts–and New York–based organizations. “Our priorities are Maine-based families, communities, and educational institutions,” Warren says. He had to say no to the AMC. Instead he turned to Maine organizations: L.L.Bean, the Chewonki Foundation in Wiscassett, and Outward Bound, which had an operations center in Rockland at the time. Would they help develop this program? The answer came loud and clear: yes. What are “huts and trails” exactly? And what do they have to do with the future of the region? The mission of Warren’s non-profit is “to contribute to the economic, social, and natural environment of Maine’s western mountains region by creating and operating a world-class recreation corridor for current and future generations.”

Maine Huts and Trails is low-impact, self-sustaining, and offers year-round public access to some of the most beautiful land in the United States. Visitors can hike, ski, mountain bike, or, in some cases, paddle from hut to hut. Huts are likened to “boutique hostels.” So you can explore the wilderness during the day, and then enjoy the comforts of a heated bunkroom at night complete with hot showers, toilets, and home-cooked food. Currently, three huts have been completed, and a fourth is nearly done. That one is particularly exciting to Warren, since its front door looks out to Sugarloaf and its back door to Bigelow Mountain. Spine-tingling views from either side—a perfect sideline visit for Sugarloaf skiers or golfers. Completion of this fourth hut signals the end of the first phase of development. Together, the four huts provide an opportunity for high alpine hiking, mountain biking, skiing, and rafting and paddling on Flagstaff Lake and Dead River—all connected through a network of full-service huts. “Very few hut systems in the world offer such integrated recreational opportunities,” Warren says. “Most offer just hiking or cross-country skiing.” The project includes plans for ten more huts and has the potential to attract thousands of visitors, help preserve our natural resources, and turn western Maine into an internationally acclaimed eco-tourism destination. Maine Huts and Trails also takes five distinct and often competing areas of western Maine and unites them in pursuit of a common goal. The program’s new executive director, Nicole Freedman, former director of bicycle programs (aka, the “bike czar”) for the city of Boston, helped turn Boston into a nationally ranked cycling city. Freedman speaks with admiration for Warren. “He has a savant talent: keeping us planning big. Making it bigger, better,” she says. “He’s five years ahead of us all the time, which is important when building a system that can impact all of Maine, an international eco-tourism destination that’s best in class. You need someone asking: In five or ten years, where will we be? Because we’ll be there soon.” When Larry Warren arrived in Maine in the early 1970s, he saw a sign on Route 27 as he entered Carrabassett Valley. It showed a falcon perched on a gloved hand, and it said: From here on, your life will never be the same. The sign proved prophetic. Now, four decades later, Warren wants others to say the same. He wants people to come—lured by Maine’s beauty, its remoteness, by the low cost and sustainable mission of the Huts and Trails program. But for people to be changed, for the wilderness to do its work, the land must stay the same. mainehuts.org